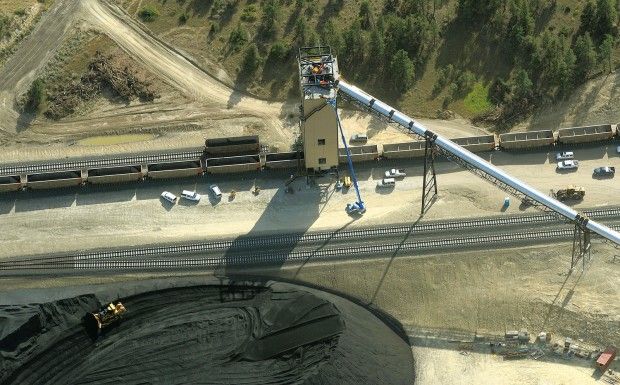 In this 2009 photo, coal is loaded on to a nearly mile-long BNSF train at Signal Peak Energy's Bull Mountain mine south of Roundup. 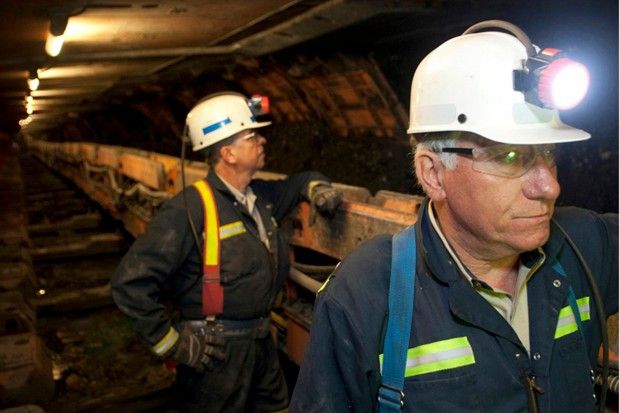 In this Nov. 9, 2010 photo, Signal Peak Energy President and CEO John DeMichiei, right, and Mine Manager Bob Hall pause for a moment in the Signal Peak mine in Roundup.

In the weeks leading up to 66 job cuts at its Montana coal mine, Signal Peak Energy was scaling back exports to sagging global markets, according to shipping company reports.

Mine layoffs, which began Tuesday, were officially announced Wednesday evening.

"Due to pressures from soft coal markets and a lower production budget for 2016, Signal Peak energy has been forced to restructure its workforce," the company said in a press release. Eight positions were eliminated and 58 workers, mostly underground miners, were laid off. Rehiring is possible later, the company said.

Global Coal Sales markets coal from Signal Peak mine on Bull Mountain near Roundup. The company informed Westshore that significant declines in global coal pricing cut coal’s value as much as 25 percent and with no improvement in coal’s value on the horizon, Global Coal would be selling less coal possibly through 2018.

“I have been there for four years, and it’s always been a good company to work for. I’m still in complete shock that this is happening,” said Justin Gallegos, who was going in Wednesday night to get his last check. He hoped to learn more about the job cuts then.

Montana and Wyoming mines have not sold coal into a good export market for some time. In October, Cloud Peak Energy announced that it would be scaling back coal exports through Westshore and instead pay the terminal to essentially not ship its coal. The arrangement gives Cloud Peak access to Westshore Terminal if the coal market suddenly improves.

Global Coal’s agreement to compensate Westshore while cutting back on shipments of Signal Peak coal was similar in terms to Cloud Peak’s October agreement. The Global Coal cuts, announced to Westshore Terminals investors Dec. 9, took another 1.5 to 2 million tons out of the terminal’s expected shipments in 2016.

Westshore investors were informed that dividends would be cut and a $270 million expansion project at the terminal has to be reconsidered.

The bottom line, explained Cloud Peak’s Rick Curtsinger, is that the global price for coal currently isn’t strong enough to cover shipping costs. Part of the pricing problem is because of a U.S. dollar that’s currently stronger than other currencies, which makes U.S. coal expensive to foreign buyers who get better deals coal shopping in countries with weaker currency.

China’s demand for foreign coal is also softening as the county attempts to prop up its own mining industry. China’s moves push coal from exporters like Indonesia into markets like South Korea and Japan where U.S. coal usually sells well.

“We do fully believe that once supply and demand get in sync in the Asia Pacific region, prices will rise,” Curtsinger said.

Outside observers agree that the long view on coal is better than current conditions.

“You can’t take away the fact that there are a lot of people who don’t have electricity in the world and if you get them electricity, you need more power plants,” said Patrick Barkey, economist at the Montana Bureau of Business and Economic Research at the University of Montana. “Coal still seems to be part of that.”

ROUNDUP — It was a tough start to 2016 for the Busy Bee restaurant, and that's saying a lot for a Musselshell County institution once filled w…

Montana coal production down for year despite recent uptick

Despite a recent uptick, Montana coal production is on track to be down a quarter or more in 2016.

In this 2009 photo, coal is loaded on to a nearly mile-long BNSF train at Signal Peak Energy's Bull Mountain mine south of Roundup.

In this Nov. 9, 2010 photo, Signal Peak Energy President and CEO John DeMichiei, right, and Mine Manager Bob Hall pause for a moment in the Signal Peak mine in Roundup.