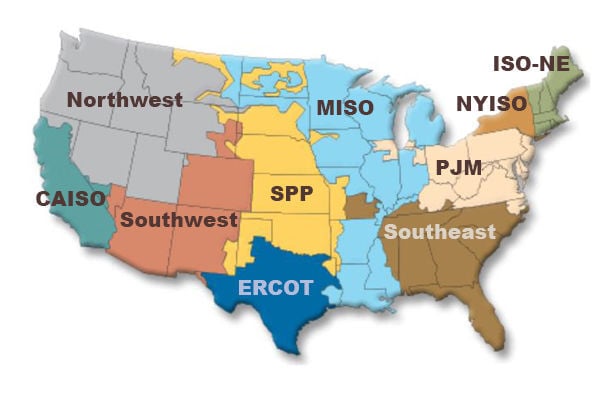 This map shows the territory of various power grid operators throughout the United States. Three entities run the grid in Montana: the Northwest Power Pool, the Southwest Power Pool and the Midcontinent Independent System Operator. 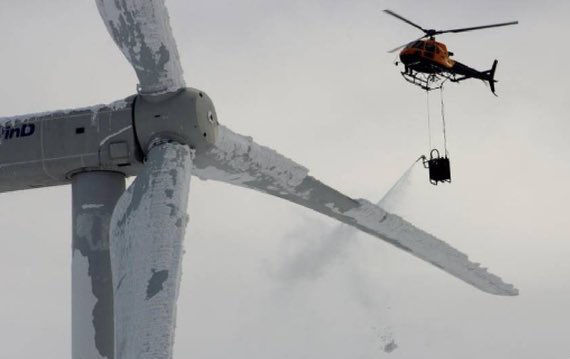 An image of a helicopter spraying deicer on a frozen wind turbine was in heavy circulation on social media Tuesday, but the turbine was located in Sweden, and the image was from 2014.

No, there were not rolling blackouts across Montana on Tuesday.

There were 30 minutes when the 900 or so residents of Jordan and Circle were without electricity. The local electric cooperative told customers what was up on social media. Once word got to Twitter, the fuse was lit.

As a winter juggernaut left millions of Americans freezing without power, politicians in Montana used the crisis to ratchet up their rhetoric about fossil fuels, President Joe Biden and a pivot to clean energy.

“Please see my statement on the reports of rolling blackouts in Montana,” tweeted Montana’s U.S. Rep. Matt Rosendale. "The rolling blackouts today in Montana, as a result of strain on our shared power grid with other states, demonstrate the dangerous consequences of transitioning away from reliable fossil fuel-based power sources. It is obscene that Montana ratepayers are being forced to ration electricity in subzero temperatures a month into the Biden administration.”

Please see my statement on the reports of rolling blackouts in Montana ⬇️ https://t.co/mtUzhKYVBi pic.twitter.com/20Zhc1ZP9i

U.S. Sen. Steve Daines tweeted that “Texas is frozen solid as folks are left w/ no power to stay safe and warm. This is a perfect example of the need for reliable energy sources like natural gas and coal. These blackouts would be devastating to MT. No heat & no power simply are not options in the dead of winter.”

Texas is frozen solid as folks are left w/ no power to stay safe & warm.

This is a perfect example of the need for reliable energy sources like natural gas & coal.

These blackouts would be devastating to MT. No heat & no power simply are not options in the dead of winter. https://t.co/Tpn4wuqrfM

Included was a retweet of the helicopter spraying deicer on a frozen wind turbine. It was an image in heavy circulation on social media Tuesday, posted repeatedly by proponents of coal and natural gas. But the turbine wasn’t from Texas, the image wasn’t from this year.

Montana was in no danger of freezing to death. The state’s two regulated utilities, NorthWestern Energy and Montana Dakota Utilities, as well as the Montana Rural Electric Cooperatives Association confirmed that their customers weren’t in danger.

That outage in McCone Electric Cooperative’s area, that was real. Even as the lights stayed on in every neighboring cooperative, as well as MDU’s 26,000-customer service area in Eastern Montana, McCone had an outage tied to the winter chaos in the middle of the country.

The first problem was that the natural gas-fired power plants in its market didn’t have enough natural gas. Customers were consuming more energy to stay warm than the Southwest Power Pool could produce. The second problem was that the wholesale energy markets neighboring SPP also had no power to sell as their customers also cranked up their energy demand.

SPP called on some of the utilities and cooperatives spread across its service area to cut power for 30 minutes. There are 17.5 million people who get their power through SPP. Tuesday, the power pool called for a cut equal to 6% of its peak demand. McCone Electric, whose demand on the system could be lost in a rounding error, was one of those that drew the short straw.

“With the cold spell in the Southeast, most homes don’t have heating systems. So they plug in strip heaters, or milk-house heaters, whatever you want to call them,” said Michael Hoy, McCone Electric general manager. “That puts a huge demand on the system. There was not enough generation in order to meet that demand. In order to stabilize the system, for the first time ever in the history of SPP, they had to go to a Level 3 Emergency Energy Alert.”

McCone advised customers that there could be more outages to come. Although there weren’t more outages, a Level 3 Emergency Energy Alert posed that possibility. To the north, Sheridan Electric Cooperative was advising its northeast Montana customers that it didn’t believe it would be asked to participate in an outage, but it was possible. Sheridan wanted its customers to know what was up. It wanted them to turn their thermostats to 68 degrees and avoid using appliances like clothes dryers, washers and electric kitchen ovens to help out.

At a press conference Tuesday, SPP said it thought the worst was behind it. It expected Monday and Tuesday to be its roughest days.

“This has been created by what I would call the perfect storm,” said Mike Ross, SPP government affairs director. “Record low, or near record low temperatures causing record-high demand for electricity. In fact we set the new record peak yesterday on the SPP system. Inadequate supplies of natural gas that are needed to power gas-fired electric generators has been an issue for us. And then extreme cold temperatures. The extreme cold has made it difficult for some units to operate. Lanny (Nickell, SPP's COO) mentioned wind. We came in on forecast, in fact wind has produced more than what we had forecast, but it was about 10% of our energy mix and average for the year was 31%. We actually forecast wind to pick back up later in the week.”

Montana Dakota Utilities customers in Montana were never in danger of losing their power, said Mark Hanson, the utility’s senior public relations officer. MDU uses a different transmission service. MDU uses the Midcontinent Independent System Operator, or MISO, which didn’t suffer a power crunch. MISO has sanctioned controlled outages in southeast Texas, but the rest of the system was safe.

Tuesday morning, MDU was tweeting that it didn’t expect to curtail power. NorthWestern was doing the same for its Montana customers.

Even though temperatures were well below zero in the Dakotas, MDU’s wind farms continued to generate power, Hanson said.

We offer Texas and all other States enduring the polar vortex our thoughts and prayers. Fossil fuels, namely natural gas and coal, are keeping heat and power going, protecting people's lives.

God bless our oil, gas, and coal companies and their incredible employees.

In Texas, there were problems with frozen wind turbines. The Electric Reliability Council of Texas noted that it had freezing problems with wind turbines. However, renewable energy accounted for a 16-gigawatt decline, while losses at coal and natural gas fired power plants were 30 gigawatts.

ERCOT moves power across roughly 90% of Texas. By Tuesday night, it was identifying natural gas production, which fell during the cold, as its major problem.

Texas Gov. Greg Abbot tweeted that gas and coal generators were among the frozen power sources.

The wind turbine image shared by Daines has been around for years. The tech website Gizmodo reported that image was of a Swedish wind turbine being de-iced in 2014. A YouTube video posted in 2016 by Alpine Helicopter of Sweden shows the de-icing.

Watch Now: Seniors struggle to get the vaccine

Watch Now: Seniors struggle to get the vaccine

Lawmakers To Get Capitol Security Briefing

Lawmakers To Get Capitol Security Briefing

What can the rolling blackouts in Texas teach us about the nation's power sector and grid?

It's true: A small number of wind turbines did ice up. But Texas utility companies recorded failures across a suite of fuel sources, both fossil fuels and renewables.

This map shows the territory of various power grid operators throughout the United States. Three entities run the grid in Montana: the Northwest Power Pool, the Southwest Power Pool and the Midcontinent Independent System Operator.

An image of a helicopter spraying deicer on a frozen wind turbine was in heavy circulation on social media Tuesday, but the turbine was located in Sweden, and the image was from 2014.