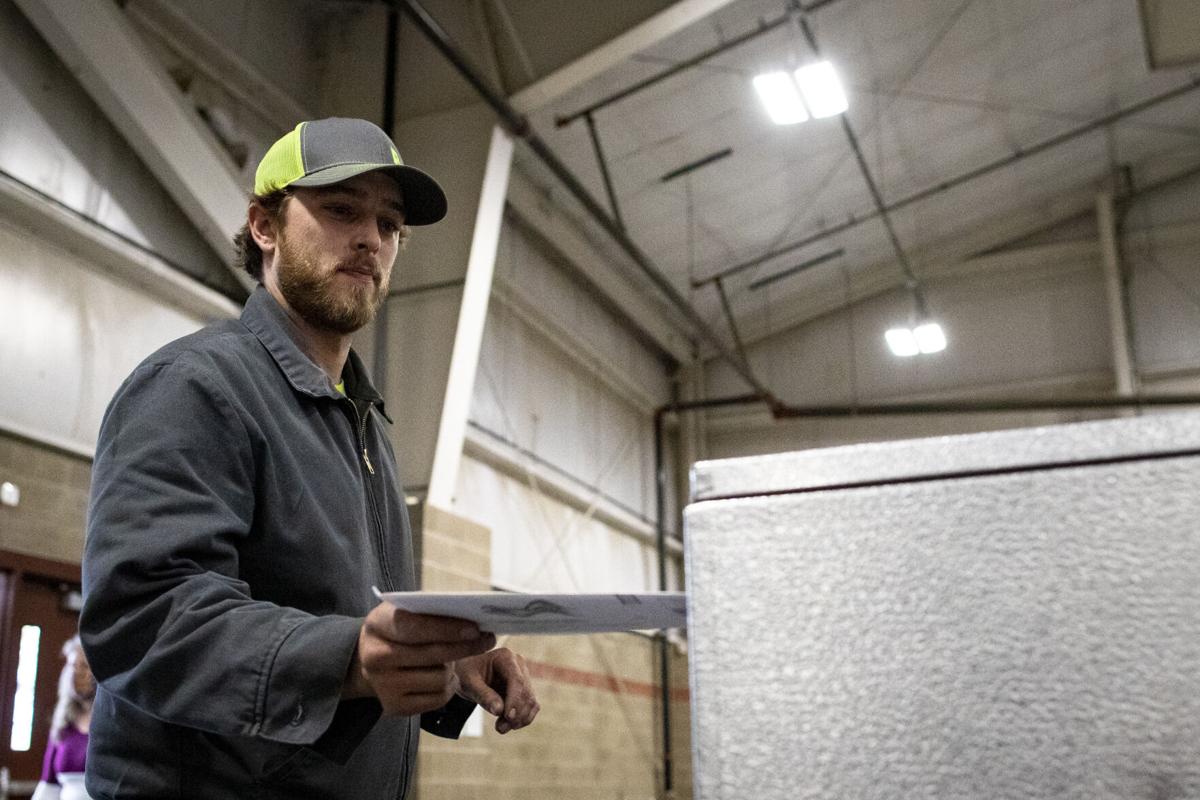 Bradley Allen drops off his ballot at the Montana Pavilion at MetraPark in Billings on Friday. 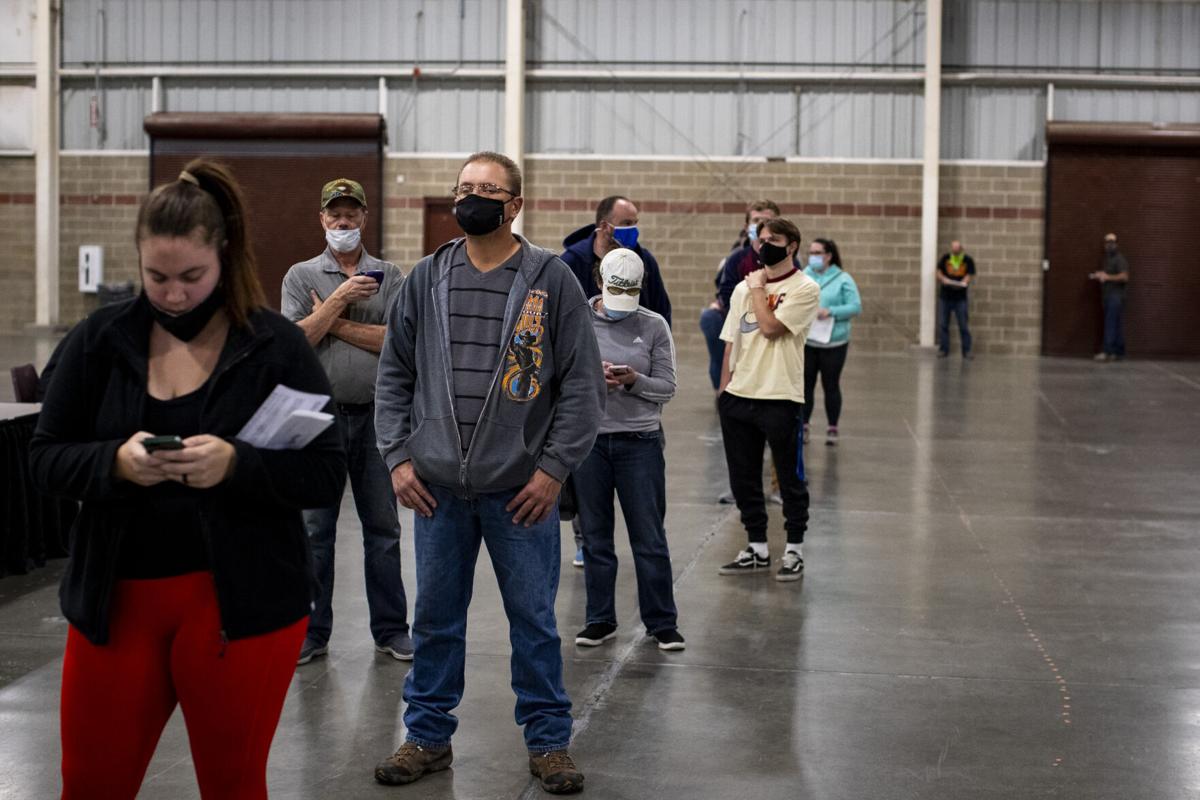 People wait in line to vote at the Montana Pavilion at MetraPark in Billings on Friday. Voters who dropped off their mail in ballots did not have a line, but voters who needed to register or did not receive their mail in ballot, possibly because they had a changed address, had to wait. 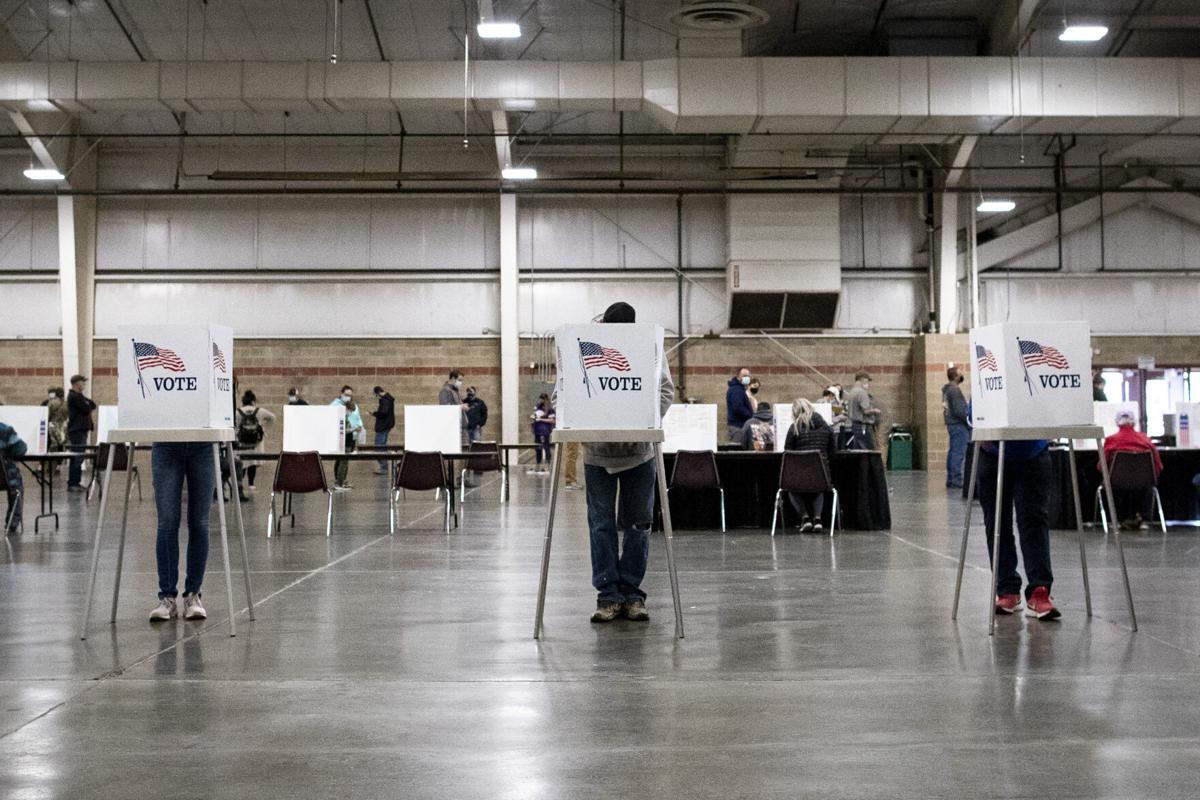 People fill out their ballots at the Montana Pavilion at MetraPark in Billings on Friday.

With two days left before polls close, more people have voted in this year's election than ever before in Montana history.

Turnout by Monday afternoon was at just over 69%. More ballots had been cast in 12 counties — Yellowstone, Gallatin, Flathead, Missoula, Lewis and Clark, Ravalli, Lake, Madison, Sanders, Park, Jefferson and Wheatland — than in the 2016 general election.

All but 11 of the state's counties decided to hold the vote this November mostly by mail because of the novel coronavirus pandemic, after a directive issued by Gov. Steve Bullock gave them that option.

Lee Banville, a political analyst and professor at the University of Montana, said Monday that mailed ballots, plus a variety of other factors, are fueling the big number of voters.

"Traditionally turnout is higher in presidential years than in off years, so we've got that. We've had an incredibly intense partisan fight for president, which fuels turnout because it gets both sides fired up. Then you have the most expensive U.S. Senate race in Montana history, and that has been built around getting people out to the polls," Banville said.

"And then you've got all the other races. Governor is an interesting race, and I think people feel pretty strongly about that race as well. And then you have the fact the state has made it as easy as it every has been to cast a ballot, even down to the stamped envelope so you don't have to scrounge around in your wallet or purse to cast a ballot. You just have to express your opinion and get it to a box somewhere."

"It's going pretty darn good," said county elections administrator Bradley Seaman on Monday afternoon. Seaman said the county started preparing returned ballots Thursday night and then started counting them at 8 a.m. Monday morning after a mandatory pause over the weekend. Opening and getting ballots ready to process and then starting the counting Monday is new for Montana this year after the 2019 state Legislature passed a law allowing counties that head start.

Still, Seaman said with a two-page ballot, it'll take some time to count everything.

On Monday there were also "quite a few" people voting in person in Missoula County, Seaman said, as well as using ballot drop-off locations. As of last Friday, Seaman said there were about 13,000 ballots that had been mailed to voters that weren't returned yet, and countywide about 26,500 registered voters hadn't cast a ballot as of Monday, according to data from the Secretary of State's office.

For those who need to show up to the Missoula County elections office, Seaman emphasized that demand for services will be high and the county will be following required physical distancing measures.

"We want to make sure voters who come in person are prepared for a longer-than-normal wait," Seaman said. He also encouraged anyone who just needed to drop off a ballot to use the 11 drop sites in the county.

Anyone who is in line to vote by the 8 p.m. close of polls will be able to vote, Seaman said.

Lewis and Clark County had the highest turnout percentage of registered voters among the state's largest counties by Monday, at nearly 75%.

Elections administrator Audrey McCue said Monday that her office has scaled up staffing for Election Day, but "will always prioritize accuracy over speed when it comes to processing and tabulating votes."

Lewis and Clark County expects to upload results to the Secretary of State's website right after polls close at 8 p.m., again between 11 p.m. and midnight and then once more when all ballots have been counted.

"Extra staff will be working on Election Day to help keep up with the high volume of ballots that will be dropped off. We too are motivated to finish as early as possible, but we have to prioritize accuracy over speed," McCue said.

With the record-high number of ballots, it'll take time to get results, Seaman reiterated.

"We're doing everything we can to ensure that we get accurate results as timely as possible, but we'll always prioritize accuracy to make sure that we do these correctly," Seaman said.

Seaman also expected to upload his first batch of results to the Secretary of State's website shortly after 8 p.m., and then 10 p.m. and again before midnight.

Over the last four years, many races in Montana have been too close to call on election night, like the governor's race in 2016 and U.S. Senate contest in 2018. Often counting votes takes until Wednesday or even the next day.

Voter turnout a record in Yellowstone County, 4 days before election

By Friday afternoon, the county elections office had received 72,747 ballots. Yellowstone County's high-water mark was in 2016 when 71,871 voters cast a ballot.

Trump noticeably absent from key US Senate race in Montana

The president visited Montana repeatedly in 2018 and hosted huge rallies in a failed bid to oust senior senator Jon Tester.

More than half of Wyoming's registered voters have already cast ballots

Long lines of voters have been spotted in several Wyoming cities.

Bradley Allen drops off his ballot at the Montana Pavilion at MetraPark in Billings on Friday.

People wait in line to vote at the Montana Pavilion at MetraPark in Billings on Friday. Voters who dropped off their mail in ballots did not have a line, but voters who needed to register or did not receive their mail in ballot, possibly because they had a changed address, had to wait.

People fill out their ballots at the Montana Pavilion at MetraPark in Billings on Friday.