The Republican National Committee has taken responsibility for errors in a Montana mailer that incorrectly told voters absentee ballots would be accepted up to 10 days after Election Day.

Phone calls and new mailers to voters who received the incorrect information were promised Wednesday morning in an emailed statement issued on behalf of the RNC by the RNC's Montana Communications director, Miki Carver.

"We regret the unintentional error we made in a recent mailing," the statement reads. "We are contacting all voters who received the mailing through live phone calls starting today (Wednesday) and we are sending new mailers to each voter providing clarifications."

The RNC mailer that some Montanans received Saturday with information about absentee voting incorrectly said absentee ballots would be accepted up to 10 days after the election if they were postmarked the day before. That is not true. County election offices in Montana must receive absentee ballots by 8 p.m. on Election Day in order for the votes to be counted.

The incorrect information about Montana absentee voting contained in the RNC mailer is identical verbatim to a paragraph on the Ohio Secretary of State's website describing absentee voter deadlines, but the RNC mailer has different words in bold.

The office of the Montana Commissioner of Political Practices confirmed Wednesday that the mailer was delivered to people "statewide," but COPP staff attorney Jaime MacNaughton said she was not given a number after she asked how many mailers were sent.

Carver declined to say how widely the mailer was distributed, adding the RNC is still "trying to figure out everything we can."

That conversation took place at about 1:20 p.m. Wednesday.

The mailer was meant to encourage voting, and the inclusion of incorrect information was unintentional, an RNC representative told the state COPP Wednesday morning.

As of Wednesday afternoon COPP had yet to receive a formal complaint about the mailer, MacNaughton said.

In Yellowstone County, 71,663 absentee ballots had been issued to voters as of Tuesday afternoon. Tuesday marked two weeks until the Nov. 6 general election.

Debunking of the mailer began Tuesday after Audrey McCue, elections supervisor in Lewis and Clark County, sent a “heads-up” email about the mailer to election officials in all Montana counties, according to the Montana Standard.

The RNC mailer is the second mailer sent to Montanans this month containing incorrect information related to absentee voting. The New American Jobs Fund, a super political action committee supporting Jon Tester and other politicians on the ballot this fall, issued a mailer in late September and early October that incorrectly told some Montana voters they had yet to apply to vote by absentee ballot. Some of the 90,000 recipients of the mailer had already applied for absentee ballots.

An mailer assuring Montana voters in multiple counties their absentee ballots will be accepted up to 10 days after Election Day is incorrect, …

The search for a Canadian man who went missing earlier this month ramped up this week with a team of private aircraft pilots, law enforcement …

HELENA — Montana's Republican secretary of state told officials to award an emergency $265,000 contract to a printing company owned by a Repub…

The battle over taxing tobacco to pay for Medicaid expansion is too close to call, according to a Montana Television Network News and Montana …

Gazette opinion: Vote as if your freedom depends on it

When Montana became a state back in 1889, most of its adult residents weren’t allowed to vote.

Montana’s Commissioner of Political Practices has been overruled for his 2018 censorship of Montana’s Board of Regents.

A mailer from an advocacy group encouraging Yellowstone County residents to sign up to vote by mail has led to some confusion among county voters. 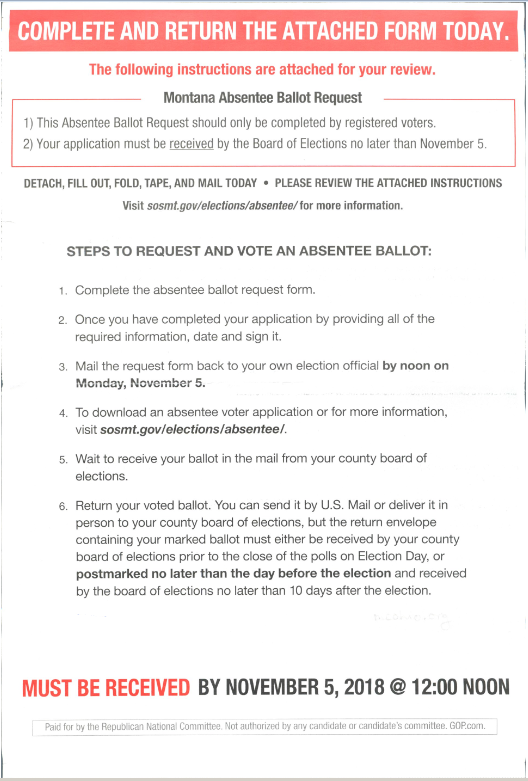 An mailer assuring Montana voters in multiple counties their absentee ballots will be accepted up to 10 days after Election Day is incorrect, election officials warn. 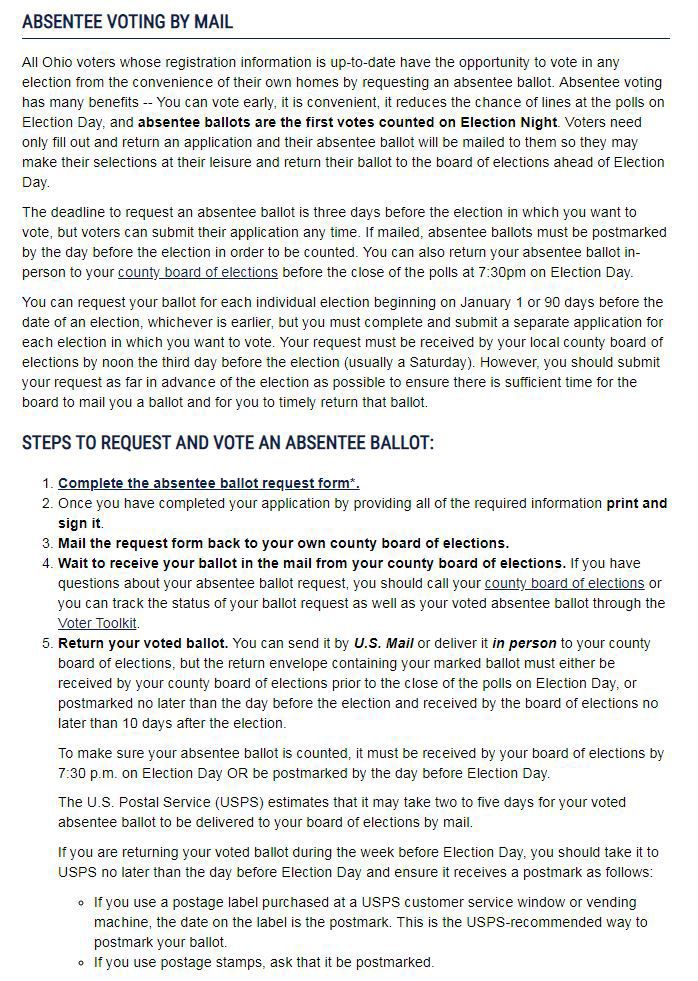 The incorrect information about Montana absentee voting contained in the RNC mailer is identical verbatim to a paragraph on the Ohio Secretary of State's website , shown here, that describes absentee voter deadlines.