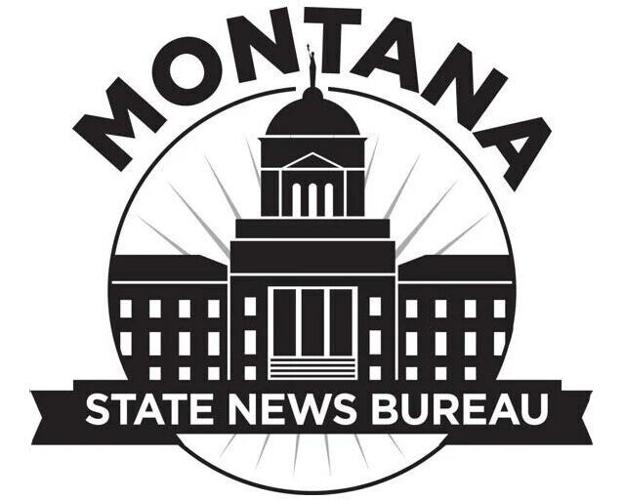 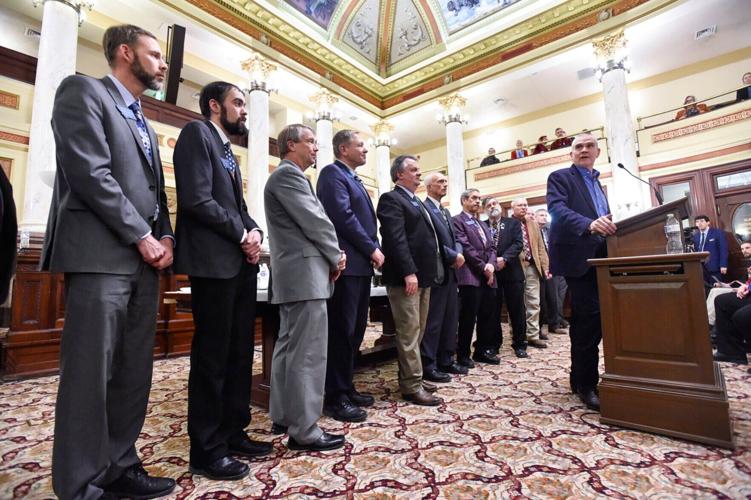 The Montana Freedom Caucus branded themselves the “constitutional North Star” before an enthusiastic crowd of supporters Thursday evening in an event that filled the old Supreme Court chamber of the state Capitol.

The group is newly formed as part of a network of ultraconservative state lawmakers across the U.S. in tow of a band of congressional agitators whose ranks include Republican Rep. Matt Rosendale of Montana.

Montana’s 14 Freedom Caucus members got together in Washington, D.C., in late December to go through a “stringent” vetting process by the House Freedom Caucus counterparts there, said Rep. Jerry Schillinger, R-Circle, who serves as vice chair for the caucus. Members said Thursday the D.C. members looked through their voting records and more before finalizing the membership.

Hamilton Republican Sen. Theresa Manzella, who chairs the Montana Freedom Caucus, said Thursday’s event was "all about” trying to get the group’s message out.

"Have you ever wondered why you continue to send Republican majorities to Helena and yet we still seem to creep to the left incrementally a little bit at the time?" she asked the crowd. "We do too. So that's what we're all about: The truth constitutional North Star of Montana is right here behind me."

The caucus membership includes several Christian conservatives who made appearances at the 2021 Red Pill Festival where Republicans In Name Only (RINOs) were identified as a bigger threat than the Democratic Party. Others also led unsuccessful efforts to assemble a special session to investigate Montana's election security last year, although such a committee was established for the 2023 session.

Whether the caucus will play a role in campaigns and financing is so far undetermined, although caucus treasurer Sen. Barry Usher, a Republican from rural Yellowstone and Musselshell counties, said the group was taking pledges from the public for the organization's future work. Asked about whether the congressional group's resources to the state networks will include fundraising horsepower, Rosendale said, "I haven't even given that a thought whatsoever."

Twelve states now have state caucuses in the “network,” and Montana’s delegation outlined a mix of priorities shaped by Montana-specific quarrels as well as nationalized talking conflicts.

Montana’s judiciary, for example, has been in the state GOP’s sights for two years, and was identified Thursday as one of the freedom caucus’ biggest threats to passing legislation.

"We pass conservative laws and they deem them unconstitutional," Manzella said.

The group also highlighted the state’s $2.4 billion surplus, arguably the premier topic in this year’s legislative session. Republicans in control of the Legislature have already shown some willingness to split from the executive branch’s ideas on how to spend it.

The Montana Freedom Caucus would prefer to kick the money back to the state's taxpayers, an effort some of the caucus members began building during the 2022 election cycle.

The group’s additional priorities outlined Thursday include parental rights, election integrity and “foreign ownership,” a loose term for concerns that other countries are buying up property in Montana, particularly around nuclear silos.

Rosendale, the evening's headliner, highlighted in his speech the impact that a small handful of disruptive elected officials can have on the greater congressional process. He recalled the political blockbuster that was the election of the Speaker of the U.S. House in late December, during which he and a small number of Republican representatives stalled the process for nearly a week in order to secure concessions in the House rules that he said would generate more dialogue among lawmakers.

“I’m not afraid to debate anybody,” Rosendale told the crowd of supporters Thursday. “... We will win those debates every day.”

Rosendale told the crowd the changes his group sought would redistribute power that's concentrated with the Speaker of the House and in turn drive more collegiality in Congress. He also went viral for some of his speeches during the episode, raising arguments that political analysts later said were embellished.

Rosendale, a former state lawmaker and state auditor who is expected to run for U.S. Senate in 2024, told reporters after the hearing Montana does not have the same procedural mechanisms that he took issue with in Congress.

"It is unbelievably different," he said of the Montana Legislature.

The second-term Congressman said while he raised the prospect of assembling a Freedom Caucus from Montana lawmakers, other members of the D.C. outfit handled the organization.

"I said, 'Look, Montana needs a Freedom Caucus. We have these super majorities in both chambers of Republicans, but they need to have a smaller group that can be … the organized, unified voice for the conservative movement,'" he recalled.

At least 15 Republican lawmakers attended the gathering Thursday evening at the state Capitol, although that didn't include GOP leadership from either the House or the Senate.

Upon announcing their formation in the first week of the Legislature, the Montana Freedom Caucus noted not all members wished to be identified.

Lawmakers were told during a Wednesday hearing that Senate Bill 117 would ensure local election offices are not influenced by outside funding.

"Kids have a right to heal, get treatment and not be harmed by treatment," bill sponsor Laura Smith, a Democratic representative from Helena, said Wednesday.

The prison has anchored Deer Lodge for more than 150 years, about 20 years longer than Montana's statehood.

County commissioners appointed Naarah N. Hastings, who owns Proof Donuts and is a competitive Brazilian Jiu Jitso fighter. This will be her first time serving in office in Montana.

This week, Tom Kuglin and Seaborn Larson of the Montana State News Bureau, talk about big-picture reporting from week four of the legislative session. 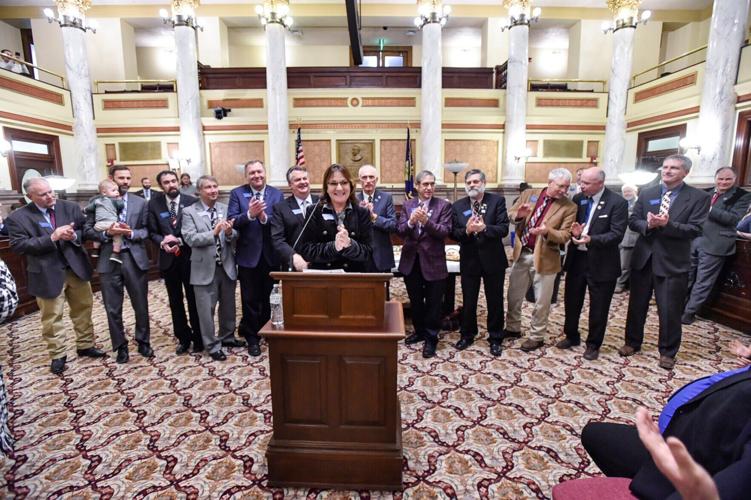 Sen. Theresa Manzella, R-Hamilton, chair of the new Montana Freedom Caucus, speaks during a gathering for the group in the state Capitol on Jan. 19, 2023. 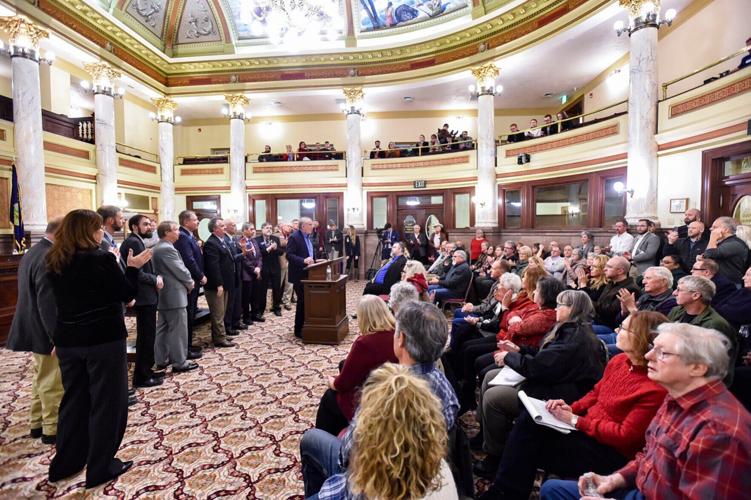 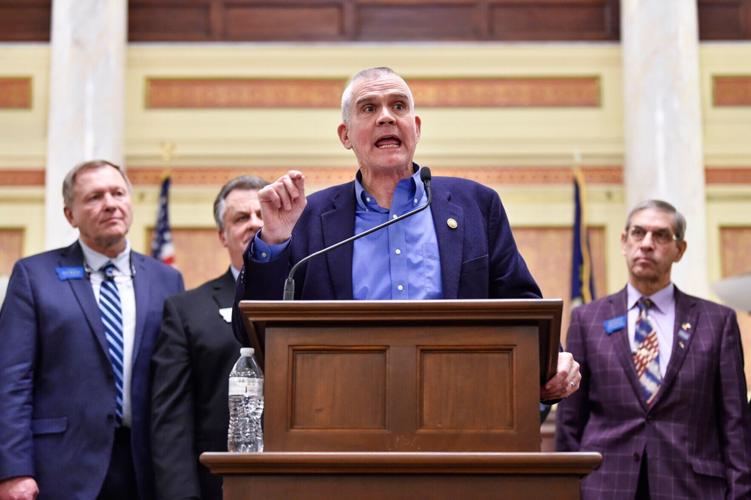 Congressman Matt Rosendale speaks during a gathering for the new Montana Freedom Caucus at state Capitol on Jan. 19.