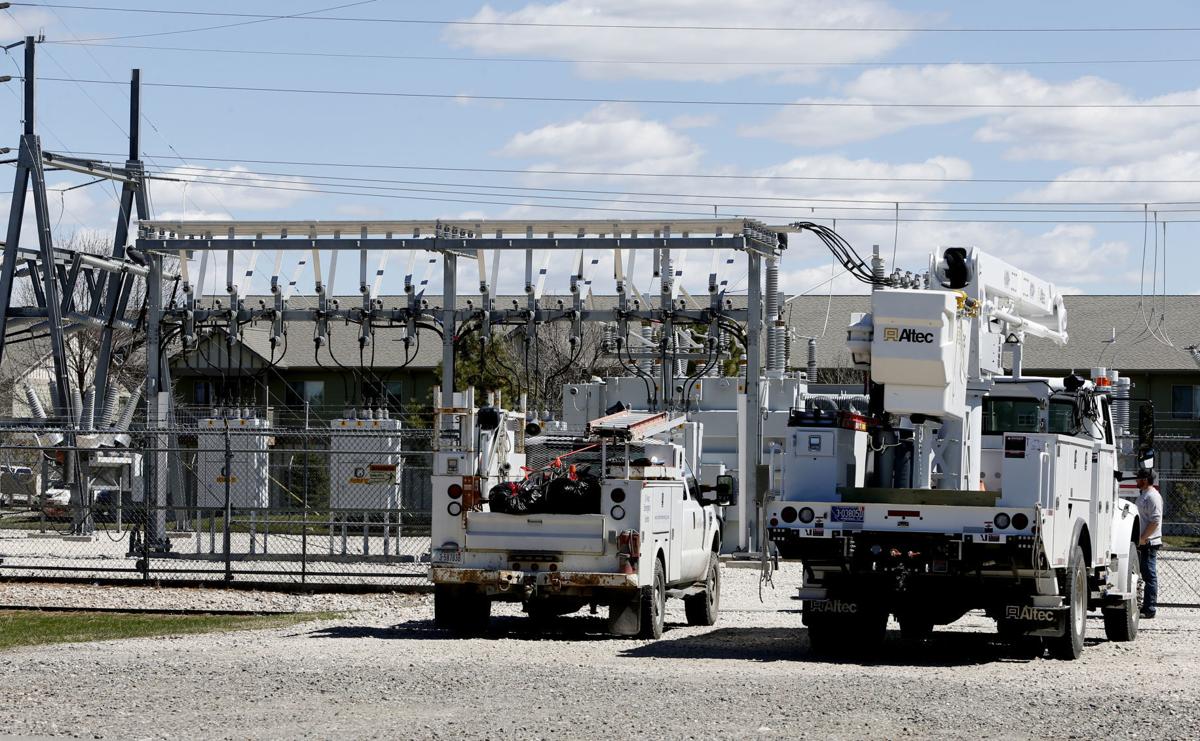 NorthWestern Energy trucks respond to a substation during a power outage on the West End of Billings. NorthWestern Energy is seeking a one-year $23.8 million rate increase to make up for unexpected expenses in parts of 2018 and 2019.

The $23.8 million request is separate from the $6.5 million rate increase that Montana’s Public Service Commission approved for NorthWestern Energy on Oct. 30. The larger charge stems from the utility having to buy more power in 2018 and the first nine months of 2019 than it expected.

NorthWestern’s director of energy supply, Kevin Markovich said in written testimony that the company bought 220,546 more megawatt hours of electricity during the period than it expected to and that market prices were also higher at the time NorthWestern was buying additional power. Total costs for the period, including power purchases, were $25,383,118. The utility is seeking to pass those charges onto its 379,000 customers.

Customers of NorthWestern are already paying on the bill. Rates increased Oct. 1 and the utility will continue to collect until the Public Service Commission decides whether the amount NorthWestern claims is reasonable. State law allows NorthWestern to request the payment. The difference between what the PSC decides is appropriate and what NorthWestern is already collecting will be credited back to customers over time once the commission has ruled. It’s unclear when a ruling will come, though it’s likely not to be for several months.

Roughly $7 million of the bill stems from problems at the four-unit Colstrip Power Plant. NorthWestern owns 30% of Unit 4. In late June 2018, a quarterly test revealed that pollution from Colstrip Units 3 and 4 exceeded federal Mercury and Air Toxics Standards, or MATS. The units, which account for 70% of Colstrip’s power generation, were shut down June 28 and operated only for testing during the following three months as power plant operator Talen Energy worked to fix the pollution problem.

Not until the middle of September 2018 did both units again function properly. Montana’s Department of Environmental Quality would later disclose that the fouled units operated out of compliance more than 70 days that summer. On Friday, DEQ confirmed that it has not yet issued a penalty for the pollution violation, saying as it has for much of 2019 that enforcement was a few weeks away.

Those problems with Colstrip meant NorthWestern had to buy replacement power. Other underperformers in NorthWestern’s fleet also contributed to the utility buying more energy than it expected. But most of the purchase price was related to paying more for power from third-party generators than NorthWestern anticipated, according to Markovich.

This isn’t the first time NorthWestern has asked to charge customers after the fact for power purchased during Colstrip malfunctions.

In 2013, Colstrip Unit 4 shutdown for seven months, during which time NorthWestern spent $8.2 million buying power elsewhere. In that instance, the Public Service Commission denied to bill customers for the $8.2 million.

The PSC concluded there were times when NorthWestern had to take responsibility for its nonperforming power plant and not simply pass the costs on to consumers. NorthWestern appealed the PSC decision to District Court and lost in 2018.

On Friday, the Montana Consumer Counsel and the Montana Environmental Information Center intervened in NorthWestern's current case to challenge the rate increase.

A $500 million next-generation wind farm paired with battery storage is making its case to service NorthWestern Energy customers, as the utili…

Talen Energy has agreed to pay at least $450,000 for violating federal Mercury and Air Toxics Standards during the summer of 2018 when the Col…

The summer-long shutdown of the Colstrip power plant in 2018 took center stage Wednesday as NorthWestern Energy made its case for a $23.8 mill…

NorthWestern Energy trucks respond to a substation during a power outage on the West End of Billings. NorthWestern Energy is seeking a one-year $23.8 million rate increase to make up for unexpected expenses in parts of 2018 and 2019.