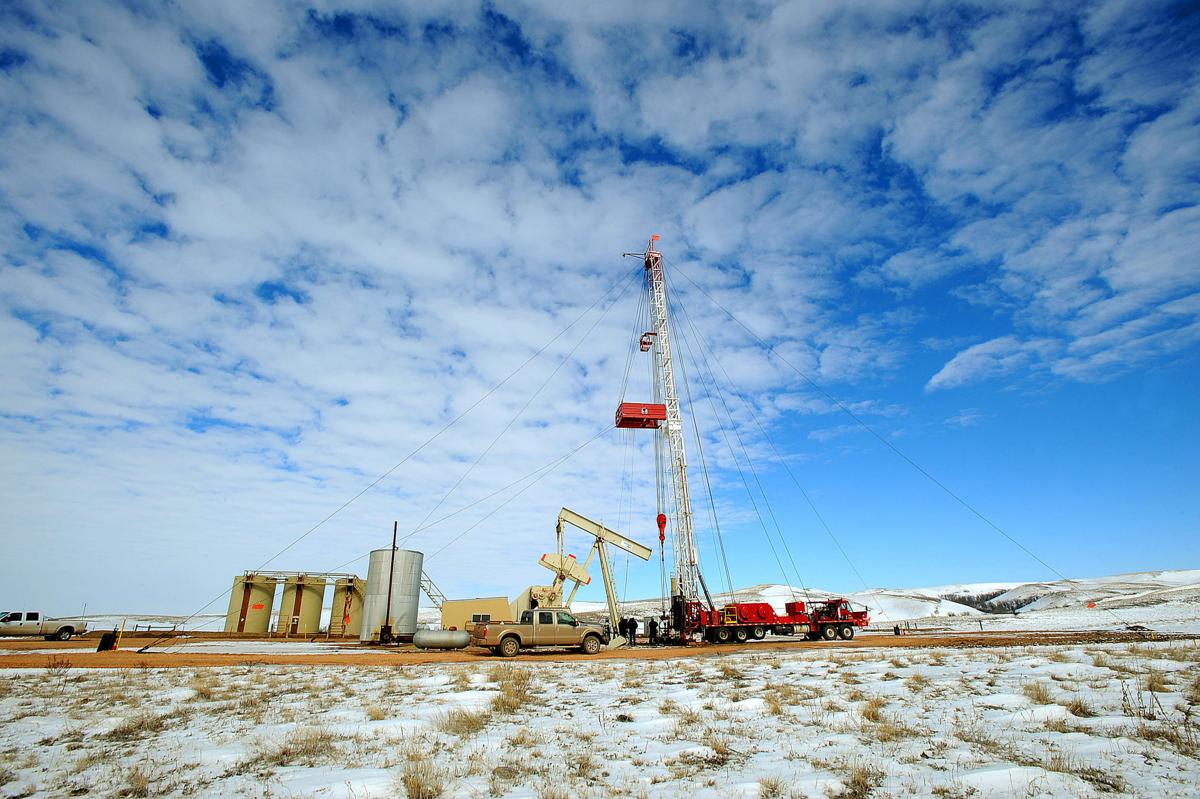 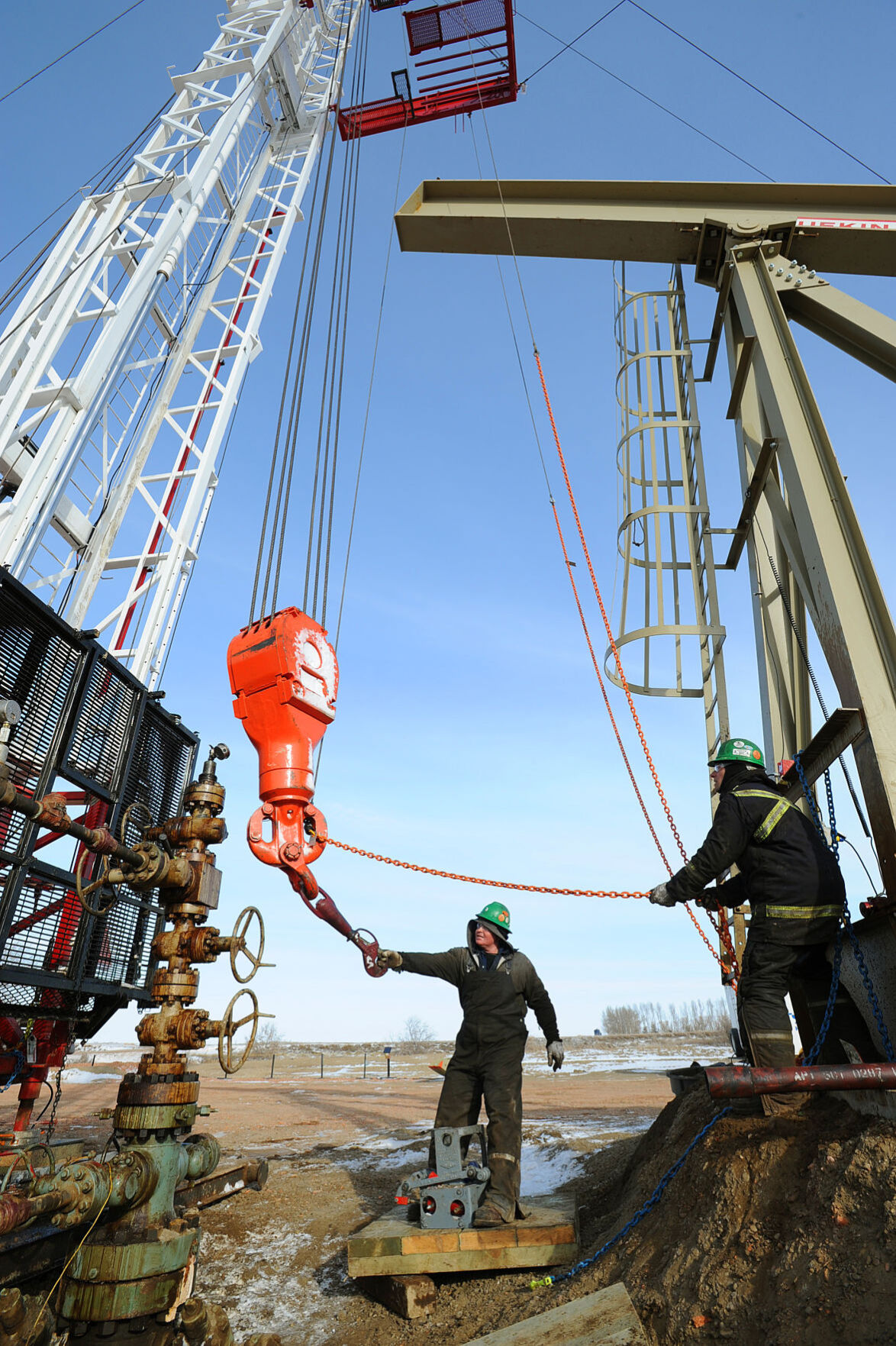 The crew of an MBI Energy Services workover rig finishes a new oil well near Fairview, Montana in 2013.

President Joe Biden is expected to suspend oil and gas leasing on federal land Wednesday, a move not likely to crimp Montana oil production despite the bluster from Republican politicians.

The dollars don’t match the fury of Montana’s Republican delegation, which has denounced Biden’s moratorium, compelled by climate change, as a “war on energy.”

“You can't just turn a switch and expect our entire country to find an alternative way to heat their homes and put fuel in their vehicles,” U.S. Rep. Matt Rosendale said in a tweet Tuesday. “President Biden's war on American energy proves that he's already putting American interests last and caving to the far-left of his party.”

U.S. Sen. Steve Daines said: “We should be prioritizing Made in America energy. Instead, @JoeBiden would rather have the U.S. dependent on the Middle East.”

It’s actually been years since the United States relied heavily on foreign oil. The U.S. Energy Information Administration put the nation’s daily oil consumption at 20.46 million barrels a day in 2019. The nation’s daily net imports that year were a half-million barrels and have plummeted without interruption every year since 2010 when U.S. oil production, driven by the fracking boom, surpassed net imports and never let up. U.S. production was a record 19.33 million barrels a day in 2019.

The Biden oil and gas decision's effect on Wyoming, explained

In Montana, where the U.S. Bureau of Land Management has offered 442,000 acres for federal lease during the Trump presidency, only about 40% of the leases drew buyers. Annual drilling on federal land in Montana has been in the single digits.

“Over the past four years, the past administration I think offered up more than 26 million acres of public land for lease. That’s an area roughly the size of Tennessee and I think they leased out like 6 million of those acres,” Jenkins said. “There’s a huge backlog of these leases that these companies have hoarded during the leasing binge that the previous administration was on. And people were getting these leases at really low rates. A lot of them were going for the minimum $2-an-acre bid and some of them were going at the noncompetitive rate of $1.50. There’s been a ton of leasing.”

Not every lease purchaser has been a well-capitalized energy company ready to drill. Robert Price, an energy speculator, compelled BLM to auction off 200,000 acres of Eastern Montana land, picking up 67,000 acres for $1.50 each. In the process, he made a New York Times feature on energy prospectors nailing down leases on federal land through noncompetitive bidding.

Price was selling would-be investors on his helium play east of Miles City, according to the online investor publication Proactive. The 60,000 acres, Price told would-be investors in Highlands Natural Resources, was worth $341 million. That was in 2016. Helium has yet to take off in Eastern Montana.

In 2018 alone, more than 100,000 acres of federal land in Montana was leased for $1.50 an acre through noncompetitive bidding, a point Conservatives for Responsible Stewardship was driving home ahead of Biden’s moratorium.

Montana's Democratic Sen. Jon Tester, plays role in this leasing fight, as well. In July 2020, Tester proposed a bill to end noncompetitive bidding on leases. That bill died at the end of 2020, but is among a list of bills Jenkins and others are hopeful will be introduced. At the time, Tester put the number of leased federal acres in Montana with no development at 1.4 million, meaning that 67% of what BLM had leased out wasn't producing oil, gas, or the royalties expected by the public.

The BLM Montana/Dakotas office has two lease sales in process that could be immediately affected by the moratorium, the first is March 21. The second sale is scheduled for June. Twice asked over four days whether Biden’s decisions would halt the sales, regional BLM officials couldn’t provide a useful response and referred all questions to staff in Washington, D.C.

The Montana Petroleum Association says activist judges are to blame for low interest in federal leases in Montana.

Whether the leases result in wells and royalty payments to the government, they still result in revenue from lease sales, Olson said. That’s money that wouldn’t be had without the leases, he reasoned. And if the leases weren’t litigated, Olson likes to conclude there would be oil, too.

The oil and gas industry has excoriated Morris for his rulings on oil and gas projects and the Keystone XL pipeline. In May of 2020, the judge vacated 287 oil and gas leases in Montana, ruling that the BLM didn’t provide analysis of how drilling operations would affect the climate or groundwater. He later vacated 440 oil and gas leases in Wyoming for violating federal sage grouse protections. The BLM hadn’t complied with federal environmental law.

Groups that successfully sued the Trump administration repeatedly over the last four years told Lee Montana Newspapers in 2020 that the federal government’s sloppiness in compliance had made it easier to prevail in court.

Daines and other Western state Republicans planned to send a letter to Biden on Wednesday asking for a meeting about the president’s oil and gas moves.

Rosendale is sticking to his guns on the moratorium taking the United States back to the days before fracking when more than half its oil was imported.

“Under the Obama Administration, OPEC countries were leading importers to the United States. If we continue to block domestic production, if our energy demand remains relatively constant, our reliance on OPEC countries will increase steadily over time, and we'll return to the pre-fracking revolution equilibrium,” said Harry Fones, a Rosendale spokesman. “Our net import in 2019 was 0.53 million barrels per day, versus the Obama administration's high of 9.67 million barrels per day. In 2019, the U.S. became a net total energy exporter for the first time since 1952.”

The percentage of the U.S. oil extracted from federal and tribal land is roughly 8%, according the the Bureau of Land Management, which isn't enough to send the United States back to a time when more than half its oil was imported. The other 91% of U.S. oil comes from private land or state land.  Roughly 9% of all natural gas and 6% of natural gas liquids produced in the United States come from federal lands.

The word from Washington is that one of the first official acts of the Biden presidency will be to cancel the permit for the Keystone XL Pipeline.

Montana’s congressional delegation, divided on accepting the election results of all the states just two weeks ago, congratulated President Jo…

The goal for companies is to lock in drilling rights on oil and gas leases on vast public lands where they make royalty payments on any resources extracted.

All nominated parcels included in the sale fall within habitat home to sage grouse, a point of contention for several conservation groups.

Energy payments to states in US West plummet in 2020

Nationwide, payments to states for drilling on public lands and in U.S. waters were down by $630 million, or about 26%, in fiscal year 2020 compared to the previous year.

South Dakota's Gov. Kristi Noem and the state's congressional delegation are criticizing President Joe Biden’s decision to cancel a permit needed to build the Keystone XL pipeline while a coalition of Indigenous people, environmental activists and some rural landowners are celebrating.

A judge has given the U.S. Army Corps of Engineers until Feb. 10 to say how it plans to deal with the Dakota Access Pipeline, which no longer has a permit for its Missouri River crossing.

How Biden's executive orders on climate change could change Wyoming

The order signed today requires the federal government to stop approving new oil and gas leases for public lands and minerals "to the extent possible." The order does not indicate how long the moratorium will last.

The legislation would prohibit the president and other top administration officials from suspending mineral leasing and permitting on federal lands and waters, unless Congress approves.

U.S. Rep. Matt Rosendale will serve on the Natural Resources and the Veterans Affairs committees, which are both important to Montana.

The bills introduced in both the House and Senate would prohibit the president or other top officials from suspending mineral leasing and permitting on federal lands and waters without congressional approval.

A U.S. District judge dealt another setback to the beleaguered Spring Creek coal mine, saying federal officials failed to consider how an 1,10…

Gov. Greg Gianforte got a firsthand look Friday at the material that will go unused and talked with the people who stand to lose income and ta…

The letter, which was co-signed by Republican governors in 16 other states including Montana and the Dakotas, called the Jan. 27 decision and lack of consultation with affected states by the Biden administration “alarming.”

The Biden administration's suspension of new oil and gas leases on federal land and water was blocked Tuesday by a federal judge in Louisiana.

The crew of an MBI Energy Services workover rig finishes a new oil well near Fairview, Montana in 2013.