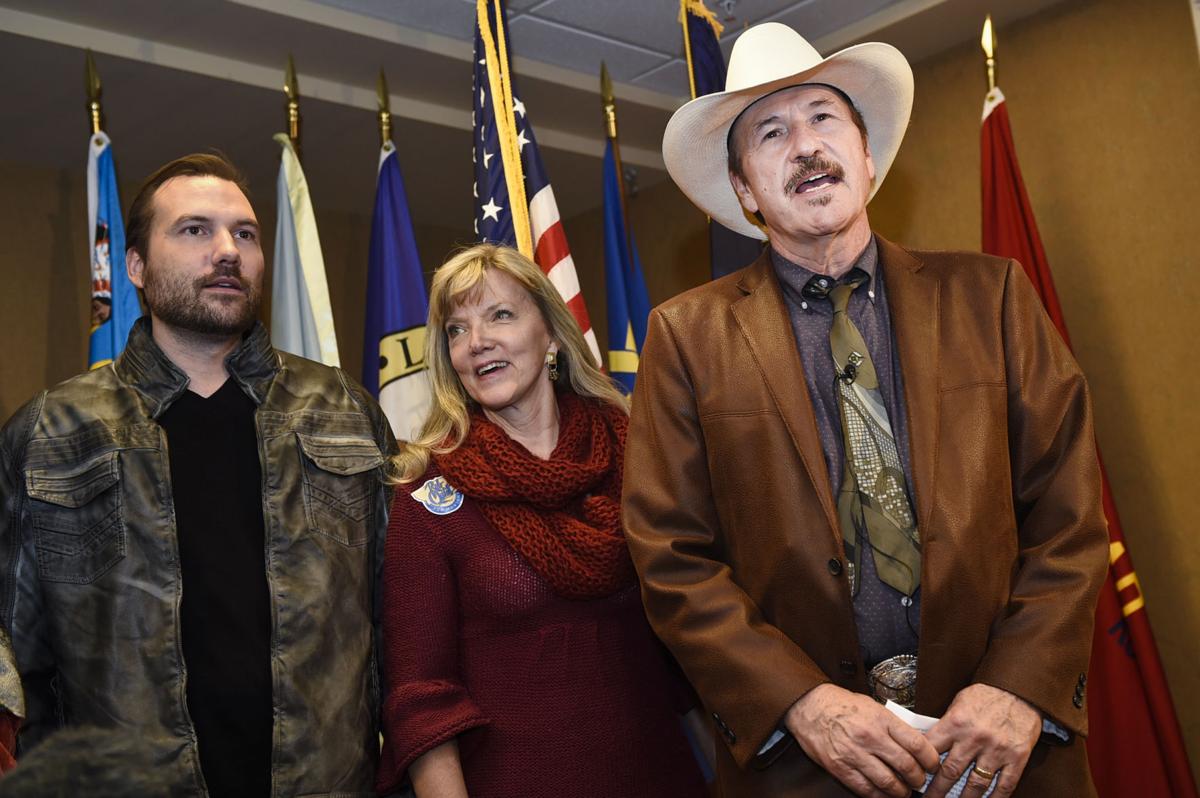 Democratic congressional candidate Rob Quist, right, flanked by his wife Bonni, center, and his son Guthrie, left, during a press conference after the Montana Democratic nomination convention in February. 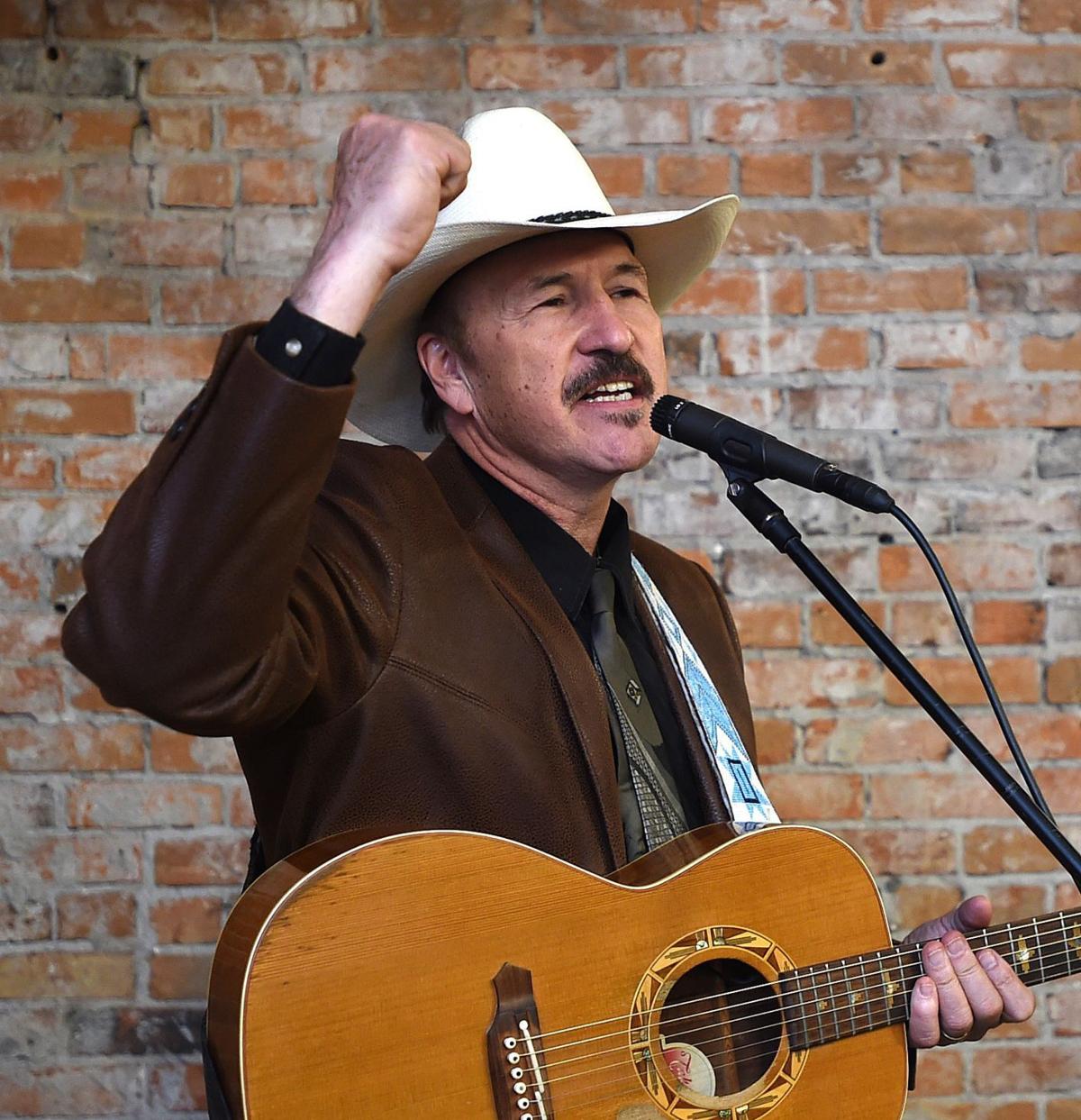 Rob Quist, Montana’s Democratic candidate for U.S. House, has a 16-year legacy of financial troubles that go beyond the property tax liens reported earlier this week by the Associated Press.

Flathead County court and property records indicate the popular musician turned politician has been turned over to collections, sued by a bank after not repaying a loan and accused of fraud and deceit by a former member of Mission Mountain Wood Band, the group that vaulted Quist to Montana stardom in the 1970s.

Financial records filed with the U.S. House also show that Quist has reported drawing a salary from his campaign, a practice that isn’t illegal, but also not typical. Quist won the Democratic Party's nomination for U.S House on March 5, defeating seven other candidates in a nominating convention.

Quist will face Republican Greg Gianforte and Libertarian Mark Wicks in a special election to fill Montana's at large House seat, vacated earlier this month by Interior Secretary Ryan Zinke. Ballots are to be mailed April 28. Voting ends May 25.

Quist attributed the debt trail Friday to 20-years of sporadic illness brought on by a gallbladder operation gone bad in 1996. The candidate said a surgeon accidentally cut his bile duct, a tube that delivers bile from the liver to the small intestine. The duct had to be repaired and Quist has been infection-prone ever since. He said a legal settlement with the Kalispell surgeon prevents him from discussing the botched operation in further detail.

“That was a real pivotal time in my life. I had kind of a five-year plan to make it” as a recording artist. “This was the fourth year of my five-year plan and I had everything in place,” Quist said. “I had the greatest musicians you could find in the Big Sky. I had a bus. I had a sound company and I had a record contract offer from Warner Western and things were getting ready to pop.”

Those plans didn’t pop, Quist said. They collapsed. Quist said he wasn’t able to tour regularly. The record contract offer fizzled. He said his debt problems, which are multiple, are bound to his poor health.

The oldest case involves Kraig Trippel, a Kalispell excavator who did $5,960 worth of work for Rob and Bonni Quist in the spring of 2001, but had to file a lien for payment after most of the bill went unpaid.

The date of the work is important because it’s 10 years before the health episode Quist said kept him from paying his property taxes earlier this decade. That tax debt crept to nearly $15,000 before the Department of Revenue filed liens for three years of unpaid taxes on Quist’s 20-acre ranch.

In court documents, Quist identifies one year, 2011, that he was unable to work because of poor health.

Trippel’s impression of Quist was that the musician was in good health and working in 2001. The contractor told The Billings Gazette Friday the Quists hired him to excavate and landscape an area for a stage and dance floor behind their barn and that work had to be done quickly because the space was going to be put to use.

There are all kinds of jobs Trippel does that can’t wait, emergency work like when someone needs a new septic drain field. The contractor will do that emergency work knowing it has to be done and payment will be slow. But the stage and dance area wasn’t one of those emergency jobs, he said.

“I’ve had people that live in a trailer house and don’t have a pot to pee in get out a shovel and try to do it themselves before calling me. If they can pay $100 or $200 a month, I’ll work with them,” Trippel said. “This wasn’t like that. And I guess I have an issue with someone not paying me for something that was being done just because it was important to pursue for that person.”

Trippel expected to be paid promptly. He said the Quists seemed to want special treatment.

“Both of them, they definitely had a sense of arrogance about them, because he was doing concerts and he was a singer and yada, yada, yada,” Trippel said. “And I don’t care. He’s just another dude to me.”

Two months after the work and Trippel’s attempts to collect, the Quists wrote him a check for $1,000. As September came to an end, the contractor filed a lien, which stayed on the property until January 2002.

Trippel was thinking of the lien last Monday as he watched the Kalispell TV evening news with his wife. The anchor was reporting Quists’ tax liens. Trippel’s 2001 lien wasn’t mentioned. The next morning, Bonni Quist turned up on Trippel’s caller ID. He didn’t pick up.

In 2007, the Quists didn’t pay their property taxes. The Montana Department of Revenue filed a lien against the Quists in 2015 for $8,189.38 for unpaid taxes and fees related to the 2007 delinquency. Court records show that In May 2016, the debt was paid off.

In 2010, the Quists stopped making payments on a 1998 line of credit from Wells Fargo. Quist said the matter involved a credit card that he charged on during episodes of poor health. The couple still owed $9,994.19 on the card when the Quists stopped paying the bill in March 2010. Wells Fargo sold the debt to Security Credit Services LLC, which sued the Quists for payment in 2014. The case is ongoing.

In 2011, Flathead County Justice Court ordered the Quists to pay $1,380.17 to Collection Bureau Services Inc., a debt collector in Missoula. The Quists were summoned to court, but didn’t respond, according to the lawsuit’s case history. Collection Bureau Services declined to discuss the debt when contacted by The Gazette last week. The debt was paid in September 2011, roughly 10 months after the lawsuit was filed.

That was the year Rob Quist wasn’t able to work, according to a lawsuit filed by the couple against U.S. Bank, which had threatened to foreclose on their property. The Quists are suing the bank and a title company essentially for not doing more to assist the couple as they tried unsuccessfully to divide and sell their land to pay off the bank. The case is ongoing and Quist isn’t comfortable talking about the lawsuit until it’s resolved.

In 2012, the Quists had problems paying their property taxes again. The Montana Department of Revenue filed a lien for 2012 taxes and fees totaling $4,624.19. The debt was satisfied by May 2016.

That May date when the Quists paid off their $15,000 tax debt is tied to a successful stretch of real estate sales by Bonni Quist, Rob said.

Riddle, in the lawsuit, said he learned of the “Private Stash” box set two years after its production from Mission Mountain Wood Band’s mastering engineer, Jeff Ader. Riddle had received no royalties. After failing to collect, he sued Quist for breach of contract, negligent misrepresentation, deceit and fraud.

Riddle did not respond when The Gazette attempted to contact him this week. His lawsuit was eventually dismissed in 2016.

Quist said he was able to come to an agreement fairly quickly with Riddle, who he said is now embarrassed that the lawsuit is coming out. Quist also admits that the box set was recorded at a time when he wasn’t healthy enough to perform and looking for another way to make some money.

“It was a real short period of time and we we’re trying to catch up financially and we hadn’t really caught him up to his royalties, and as soon as that happened, we sat down and worked out a situation where we could do that,” Quist said.

Quist said he hasn’t been shy about talking about his financial problems. He said they’re woven into his campaign narratives about his health and the need for a more serving government health care system. He said he’s told this story at the Missoula Public Library at the beginning of his campaign.

The candidate’s best earning days are behind him. His financial records filed with the U.S. House show that Quist made $13,798 as a musician, including $14.96 in royalties in the 12 months leading up to his candidacy. That’s less than the 69-year-old received from Social Security. His combined household income, including $2,000 in salary from the beginning of his campaign, was $50,000.

“These are issues that everyday Montanans face and quite frankly, I’ve been wanting to talk about this. I’ve been up front with it since day one when I first made my speech,” Quist said. “I think it’s really important that the people of Montana have somebody who has gone through the same issues that they have.”

From campaign controversies to the body slam: A year in Montana politics

While Montanans don’t have a vote in the U.S. House, where the bill to replace the Affordable Care is working its way through the process, the candidates to replace former U.S. Rep. Ryan Zinke have plenty to say about the legislation.

HELENA — Montana filed three tax liens to collect about $15,000 in back taxes against the Democrat running for the state's only congressional …

Montana voters will pick a new U.S. House representative in May, with little idea of who has been spending money in the special election.

Democratic congressional candidate Rob Quist, right, flanked by his wife Bonni, center, and his son Guthrie, left, during a press conference after the Montana Democratic nomination convention in February.