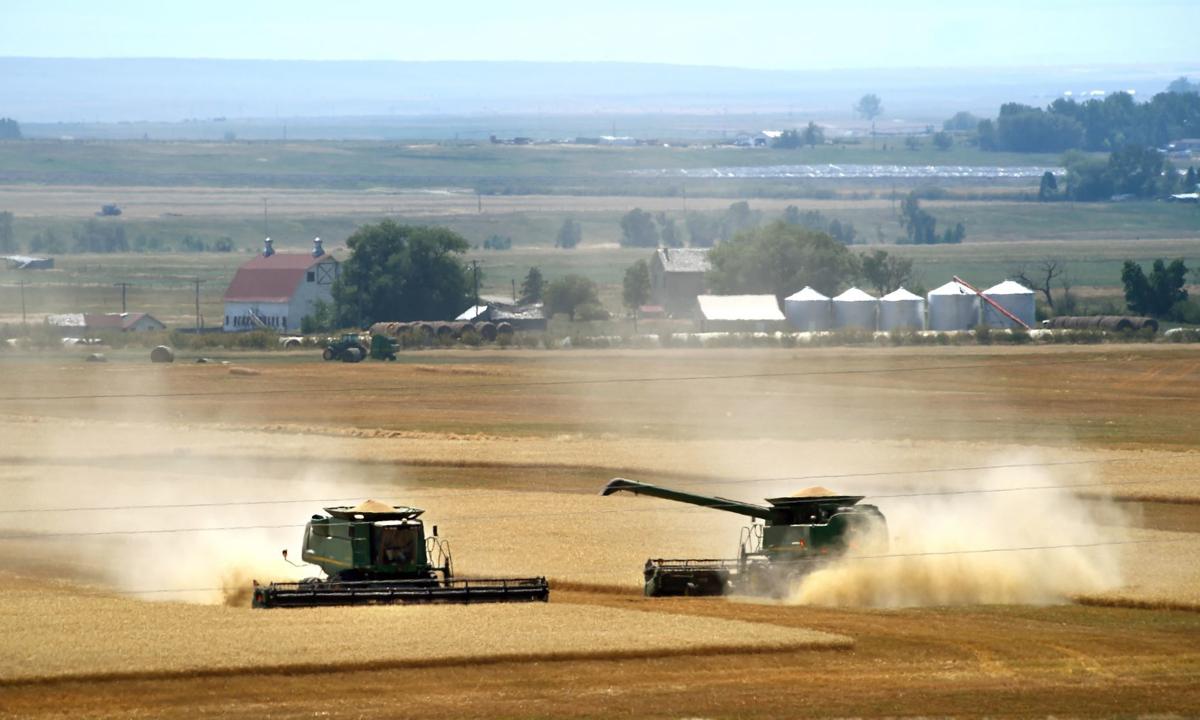 Combines work as winter wheat is harvested near Hobson in 2016. 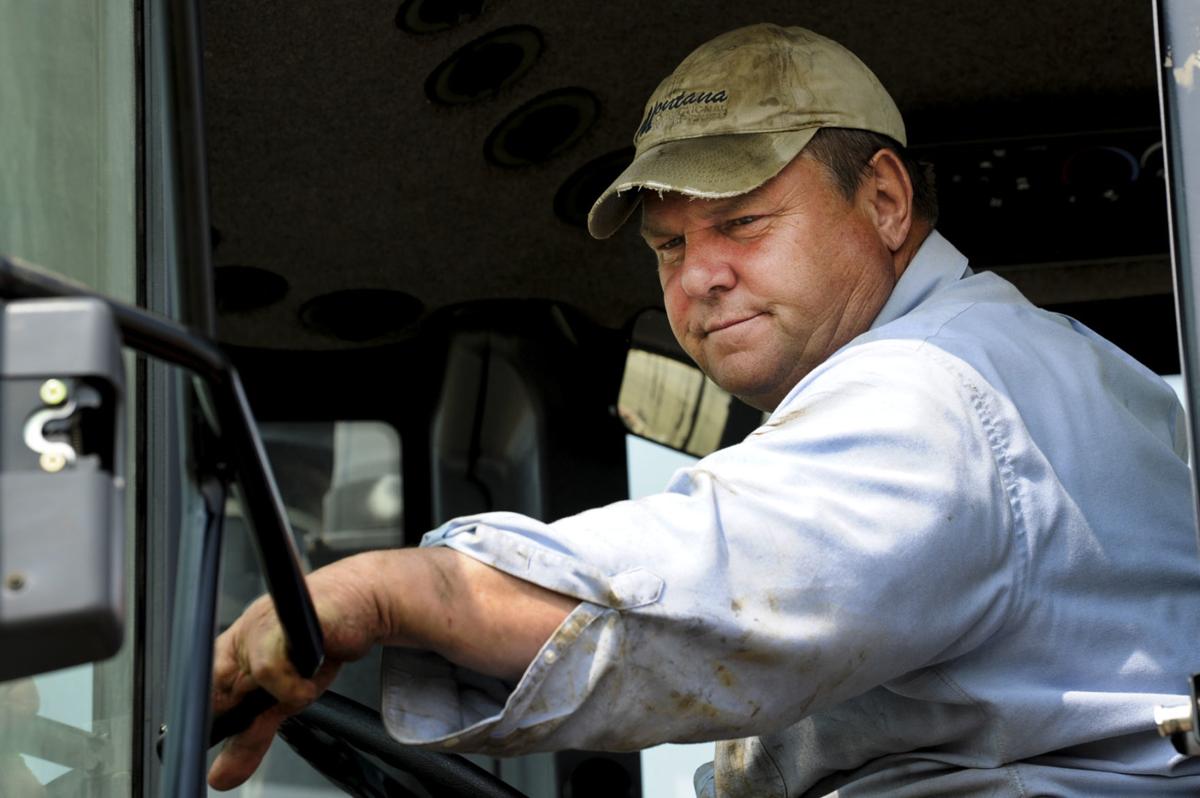 Sen. Jon Tester shuts the door to his tractor while working on the farm in August 2018.

Montana farmers are on the losing end of President Donald Trump’s trade policies, U.S. Sen. Jon Tester said Tuesday while calling on lawmakers to rein in the president.

Speaking on the Senate floor Tuesday morning, Tester, a Democrat, said low commodity prices stemming from Trump tariffs and trade wars were putting farmers out of business. He said it was time lawmakers reclaimed authority on trade matters.

“We need to hold the administration, the executive branch — whether there is a Democrat in the White House, a Republican in the White House — accountable on these issues that revolve around trade,” Tester said. “We’ve given away our power on trade. It is our job to deal with issues on trade. I am talking Congress’ job.”

The senator promised to introduce a bill soon to empower Congress on trade matters. He also repeated his invitation to host a Montana meeting between Trump and farmers. Now in his third term, Tester has repeatedly said he supports fair trade, not free trade. He hasn't voted to pass a free trade agreement during his tenure.

Tester said the current price for ordinary hard red winter wheat was $3.50 a bushel, about what farmers were getting in 1978. Senate floor speeches are routinely read into the Congressional record. Though the chamber is mostly empty when speeches are made, the speeches are televised to a national audience via C-SPAN. Tester farms near Big Sandy.

But wheat prices are also in line and actually a little better than prices in 2016, before Trump won election and more than a 18 months ahead of the president's first threats of tariffs against China. Those low 2016 prices were also before the president withdrew the United States from the Trans-Pacific Partnership, a 12-nation trade agreement that would have lowered tariffs on U.S. wheat in the Asian Pacific, particularly Japan, a major buyer of Montana wheat.

In 2016, ordinary hard red winter wheat prices had bottomed out at $2.16 a bushe ahead of the fall harvestl. The primary drivers for low prices now, and in 2016, are abundant global supply and cheap corn, which have pulled wheat prices down to unsustainable levels.

“In general, these are the second-lowest prices we’ve seen for Montana wheat this time of year since 2016,” said Anton Bekkerman, a Montana State University economist.

Both in 2016 and this year, farmers were already coming off abundant global harvests the previous year, which pushed prices lower. Then the current-year harvest came in better than expected. Canada in particular is having a better-than-expected harvest, which is putting pressure on prices for Montana grain, Bekkerman said. A premium payment for higher-protein grain, something on which Montana farmers rely, has also decreased because of supply.

Further complicating things are low corn prices. Ordinary wheat and corn compete with each other as animal feed. Cheap corn has had an undertow effect on prices for ordinary wheat and pulled wheat prices in general underwater.

Trade disputes and tariffs have also weighed down the wheat economy, Bekkerman said, though at this point trade matters have been around for 18 months or more and are already baked in. Trump backed out of the 11-nation Trans-Pacific Partnership in January 2017. The consequences of that exit have already been triggered with Montana’s global wheat competitors Canada and Australia facing lower tariffs than the U.S.in Japan because they stuck with TPP after American pulled out.

The president first started making trade threats against China in March 2018. Commodities markets have already responded to changes in trade, meaning that the current movement is caused by other factors.

“Yes, trade and tariffs are important, but they have been incorporated into market prices to a large extent and prices have stopped reacting nearly as much as they did last year to minor news and changes,” Bekkerman said. “This is part of the reason that the G7 announcement about improved relationships with Japan, and more of the same in the past few days, didn’t move the wheat or cattle markets very much: markets are waiting for much more concrete details before reacting. A year-and-a-half ago, there would have been more action.”

This week, Trump tweeted that a bilateral trade agreement between the United States and Japan would be finalized by month’s end. Commodities markets didn’t respond significantly.

As Gordon Stoner harvested durum wheat on his Outlook farm Tuesday, there were a host of pricing challenges on his mind. Rain has blanketed Stoner’s far-northeastern corner of Montana in the past 10 days, harming his durum’s “falling numbers,” a test for the enzyme alpha amylase.

As the number falls, the enzyme activity in the flour increases, and the wheat’s ability to make quality dough deteriorates. The dough can be sticky, hard to mix and unable to make good pasta. Durum is all about pasta.

Plan B for Stoner’s durum is selling it as animal feed, which puts it in direct competition with corn, the exact competition Bekkerman explained was pulling wheat prices downward. Stoner's neighbors are faced with the same challenges. Before the rain, the Hi-Line farmer was looking at a respectable number of bushels cut per acre and good quality. The bushels remain, but the quality has been watered down by untimely rain.

“Every farmer wants to cut bushels, but we want to get paid for it, too,” Stoner said. “I had chatted with an ethanol plant the other day. We may see a large part of the durum crop headed to feed or ethanol. Corn sets the price floor. What we find with feedlots is, unless there’s a lot of wheat available, they don’t want to change what they feed.”

Stoner is a trade veteran, as a past president of the National Association of Wheat Growers, he’s been to the Asian Pacific to face the challenges of getting wheat into markets generally important to the United States but specifically important to Montana, the nation's third largest wheat producing state. He saw no benefit to backing out of the Trans-Pacific Partnership as both Trump and Hillary Clinton promised withdrawal during the 2016 presidential election. He also doesn’t rank trade as the top challenge facing farmers currently.

“Supply and demand No. 1. Trade wars No. 2,” Stoner said. “And then I think a weakened global economy. All of those things contribute to it.”

There are technology issues facing U.S. farmers as Europe puts restrictions on imports of commodities exposed to glyphosate. Italy has imposed country-of-origin labeling rules on pasta ingredients, which has hurt farmers in Canada and the United States. India is increasing its tariffs on U.S. products, including lentils, which Stoner also grows, as the India-U.S. trade dispute enters another year.

There was a crackle on the radio inside Stoner’s combine as his harvest crew questioned whether they should stop to deal with a hydraulic leak or press on. If the pressure will hold, Stoner said, keep going.

U.S. Sen. Jon Tester is inviting the president to a sit down meeting with Montana farmers.