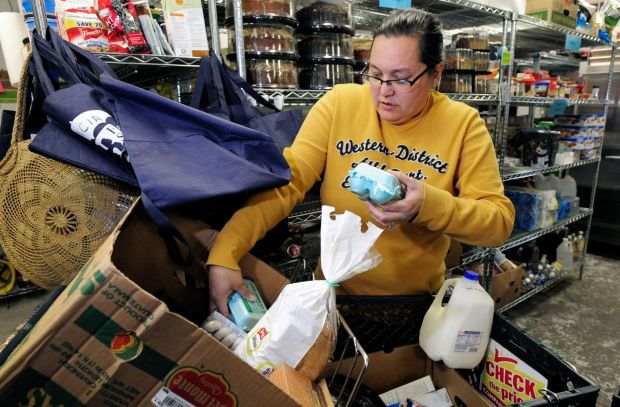 Michelle Reed, food room coordinator at Family Service Inc., fills food boxes in this file photo from 2014. Individuals and families often wait in lines to get boxes full of necessities, such as bread, milk, and produce. Michelle does what she can to offer assistance with dignity. 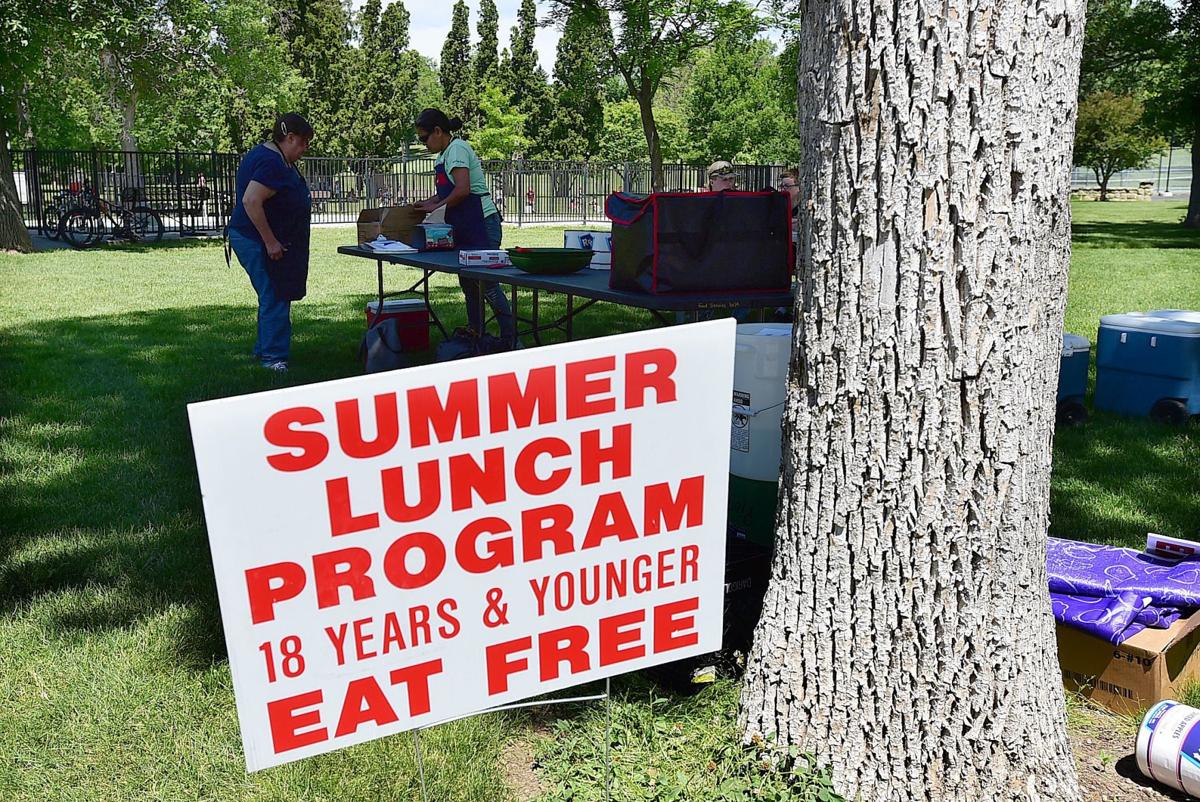 Summer lunch program workers prepare lunch at Pioneer Park on Wednesday. For some children from low-income families in Billings, these free lunches may be the only complete meals they eat during the summer. 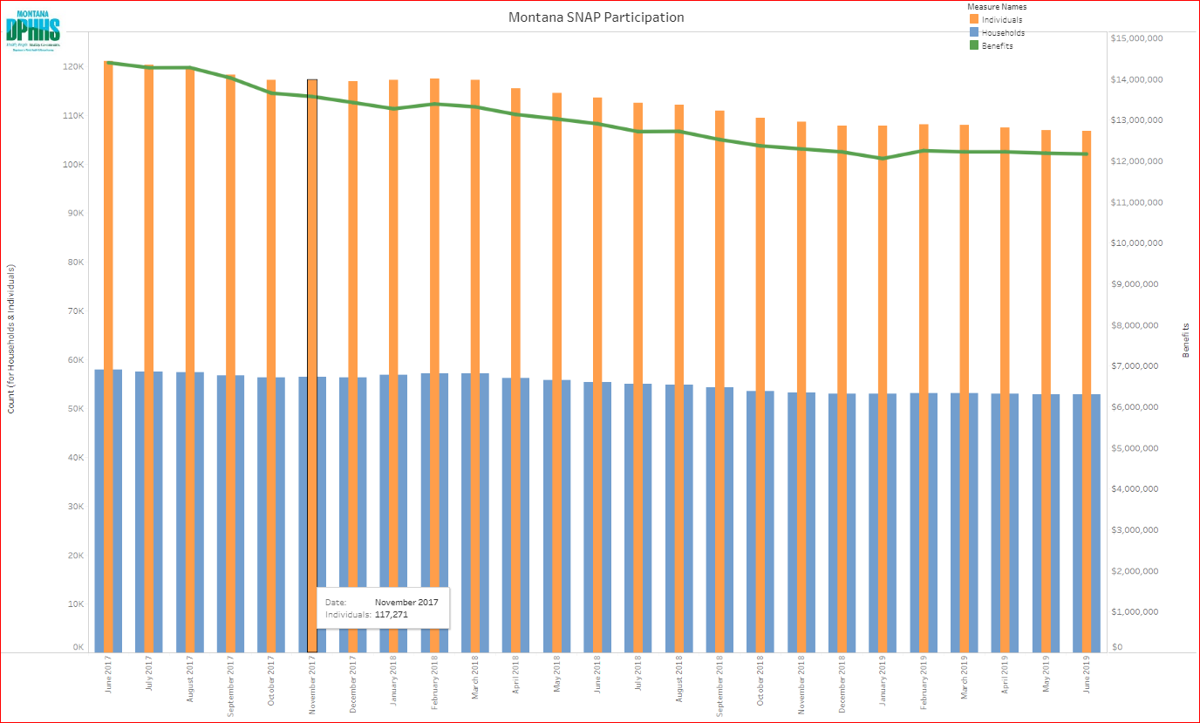 Montana enrollment in the federal Supplemental Nutrition Assistance Program, SNAP, better known has food stamps, has been on a gradual decline over the last two years.

Trump administration plans to cut back eligibility for food stamps, a move expected the trim 3 million people from the program, are getting mixed reviews from Montana’s congressional delegation.

At issue is a rule allowing families qualifying for other assistance programs, like Temporary Assistance for Needy Families, or TANF, to be automatically be enrolled in the food stamp program, officially known as Supplemental Nutrition Assistance Program, or SNAP. The reasoning behind the current practice, known as categorical eligibility, is that anyone poor enough to qualify for other programs has already proven that they lack the personal assets and income that might keep them out of SNAP.

U.S. Agriculture Secretary Sonny Perdue said SNAP enrollees should have to show what they have in savings and what their gross income is before being declared eligible. There are 3.1 million people currently enrolled in SNAP who wouldn’t make the cut if they had to disclose assets and income, the secretary told reporters Wednesday.

“The American people expect their government to be fair, efficient, and to have integrity — just as they do in their own homes, businesses, and communities,” Perdue said. “That is why we are changing the rules, preventing abuse of a critical safety net system, so those who need food assistance the most are the only ones who receive it.”

The proposed change was published in the Federal Register on July 24. The public will get 60 days after publication to comment before a final decision is made.

Testing for assets and gross income has always been controversial. The argument against the test is that a family should be able to grow savings without being kicked out of SNAP. There are 40 million people enrolled in SNAP nationwide. Montana has slightly more than 100,000 SNAP participants currently, at a cost of $12 million a month to the federal government. Enrollment has declined about 20,000 since 2017, according to the state Department of Public Health and Human Services. State enrollment in TANF is much smaller, about 7,500 individuals in June, down from 11,500 two years ago. Federal TANF spending in Montana is a little less than $1.5 million a month.

Because the monthly food benefits provided by SNAP supports a family for only a few weeks, organizations like Burhop’s are where low-income people turn when SNAP runs out.

There will be a purge of Montanans from the SNAP program because they won’t pass the asset and income tests, Burhop said. There will also be people who qualify but give up because the task of regularly reporting assets and gross income will be discouraging.

"We should be working to improve nutrition assistance programs for working families who are just trying to feed their kids,” Tester said in an email. “Instead, policies out of Washington, D.C., are recklessly stripping away what little help they have putting food on the table. This baseless decision will hurt the 3 million Americans who need it most, and I will be fighting like hell to stop it."

Only a few states do asset testing for SNAP now. Montana isn’t one of them. The basic qualifications for the program are that household gross income be less than 130% of the federal poverty level, or $32,640 for a family of four. The asset limit states can currently opt out of is $2,250 savings. The proposed rule change would take that option away.

Republicans Sen. Steve Daines and Rep. Greg Gianforte backed the Trump administration’s decision to close the loophole, saying it was important to focus the program.

“SNAP is an important safety net program for many Montanans, but it is essential that it is targeted to those in greatest need,” Daines said in an email. “I support Secretary Perdue’s efforts to reduce waste and make critical programs like SNAP more efficient, incentivize work, and ensure resources are directed toward those who need it most.”

Gianforte noted that in some states the government activity that prequalifies someone for SNAP is just being issued a brochure describing contacts and information to other assistance programs. Perdue cited the same example Wednesday.

The representative is running for Montana governor, a position under which he would oversee DPHHS, the state agency overseeing SNAP.

"SNAP is critical to many Montana families, and we should provide a safety net to those who need it most. A loophole exists, however, that allows SNAP benefits to go to recipients whose only eligibility is that they received a brochure,” Gianforte said in an email. “I appreciate the administration's move to close the loophole, save taxpayer money, and provide a safety net to those who truly need SNAP benefits."

House Republicans were all set to pass the 2018 farm bill last week, but then conservative voters joined with Democrats to kill the legislatio…