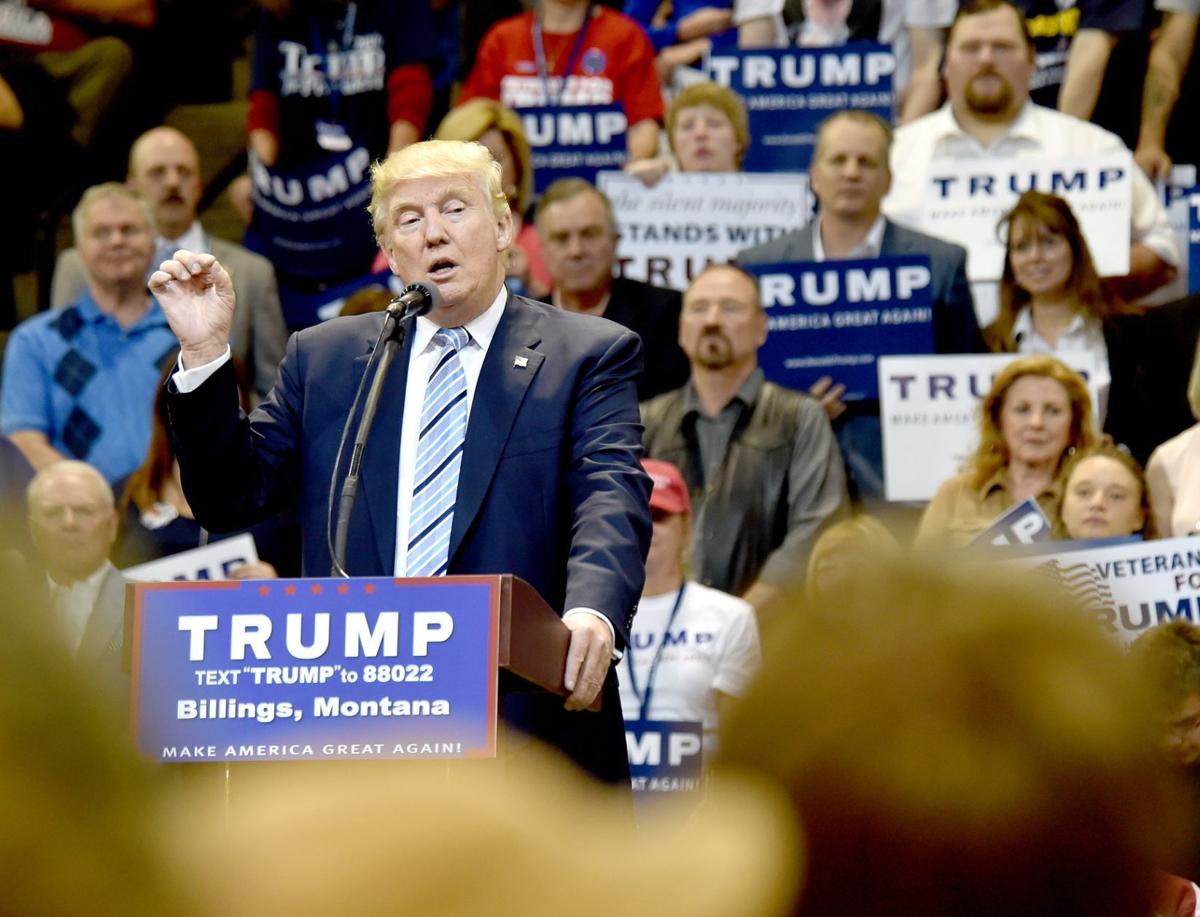 Donald Trump speaks to thousands on May 26 at Rimrock Auto Arena at MetraPark. 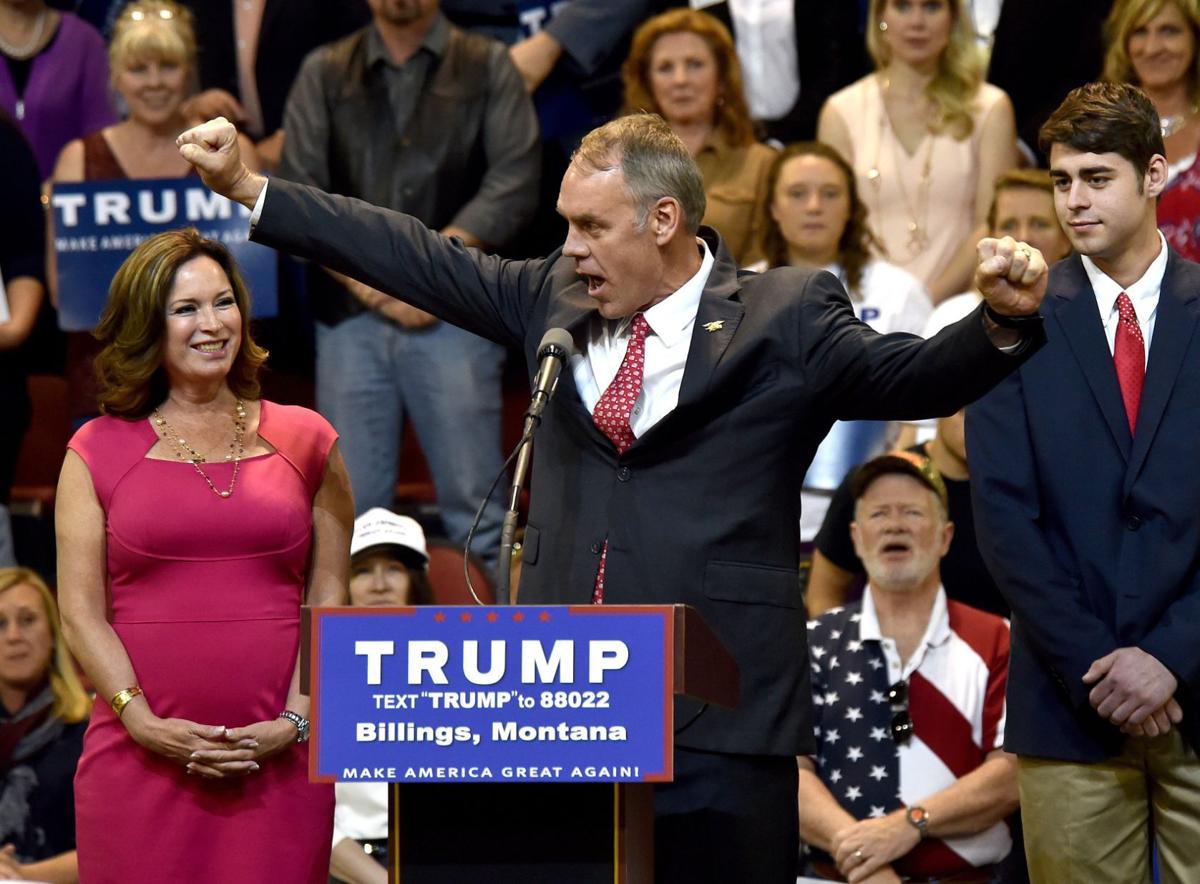 Rep. Ryan Zinke endorses Donald Trump before his speech to thousands in May at Rimrock Auto Arena at MetraPark. 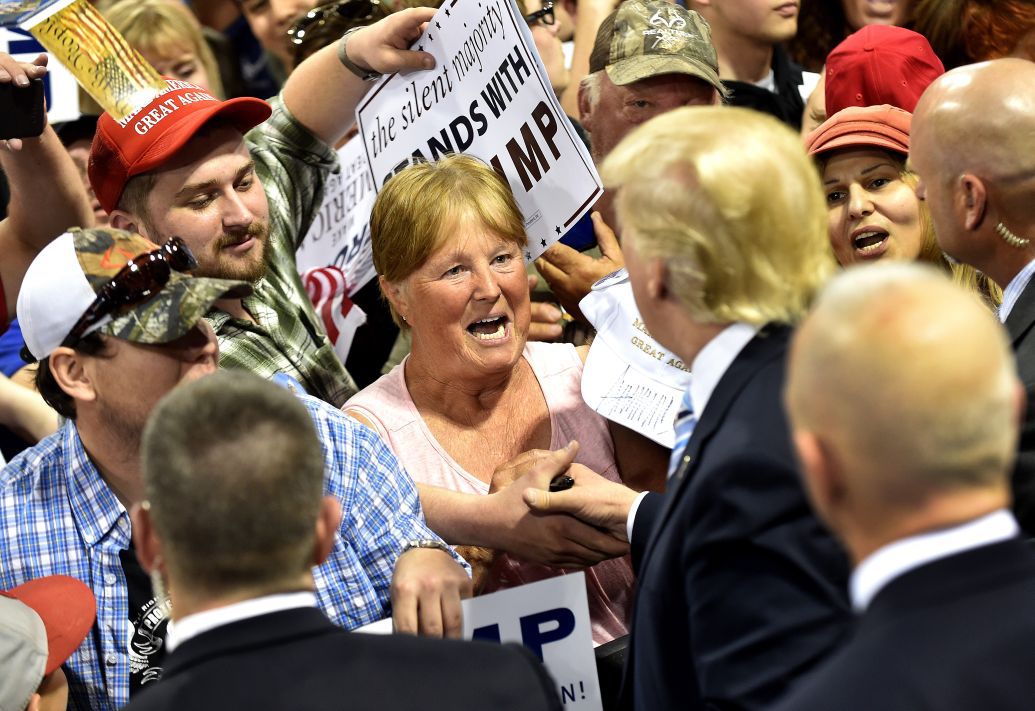 Donald Trump shakes hands and signs hats for fans after his speech Thursday at Rimrock Auto Arena at MetraPark. 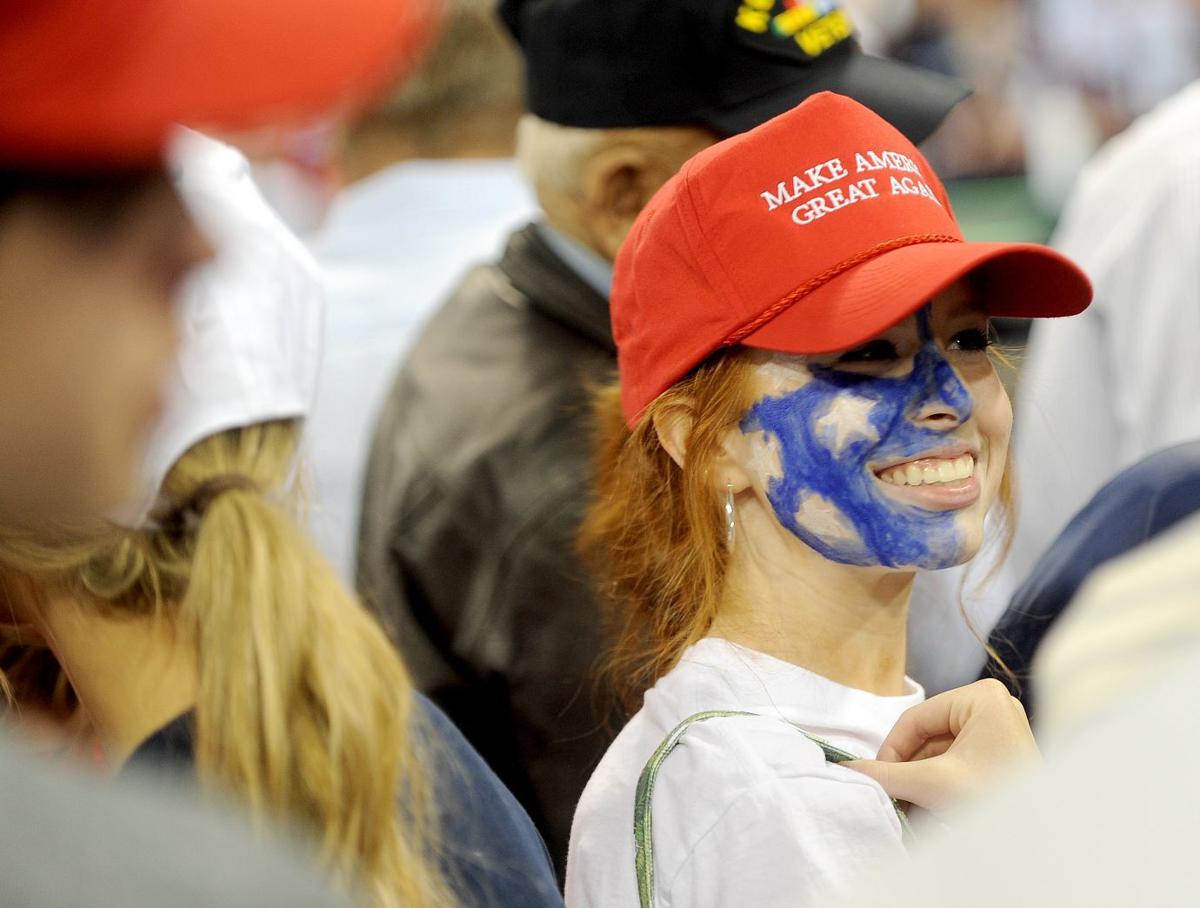 Audrey Miller, 15, of Bozeman painted her face with stars for the Donald Trump rally on Thursday at Rimrock Auto Arena at MetraPark. 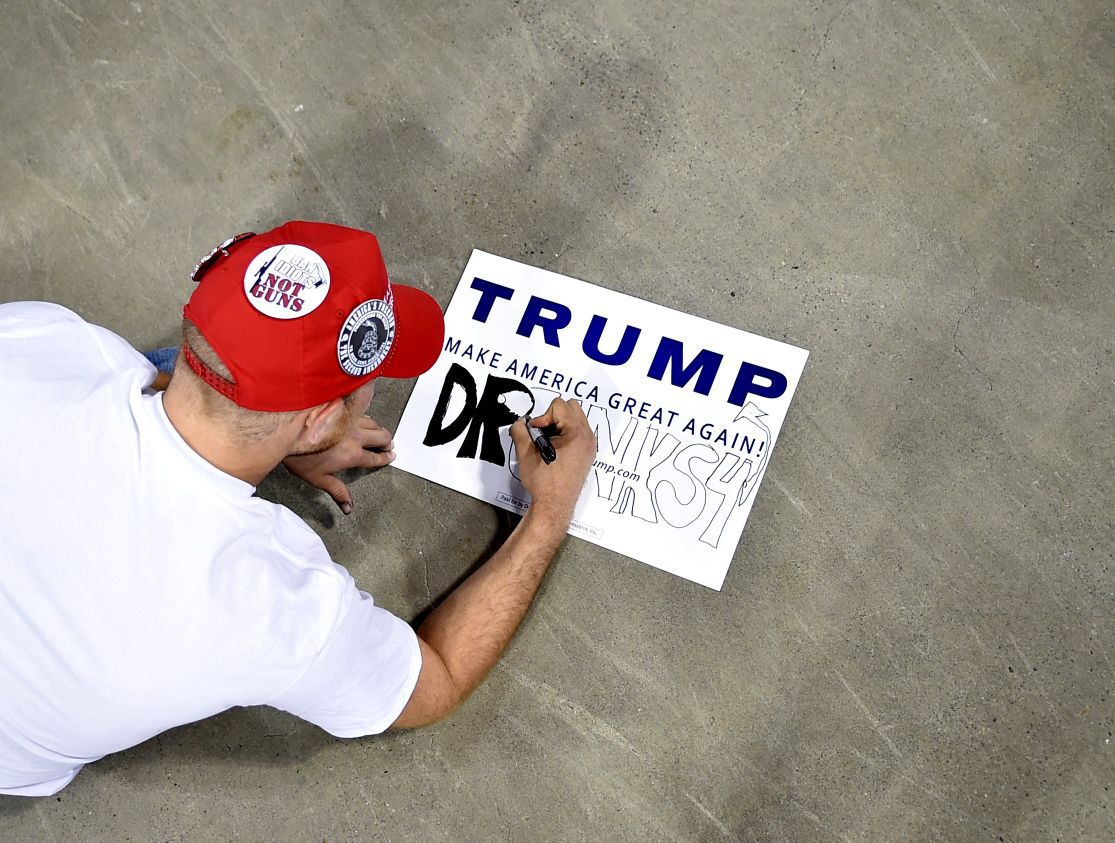 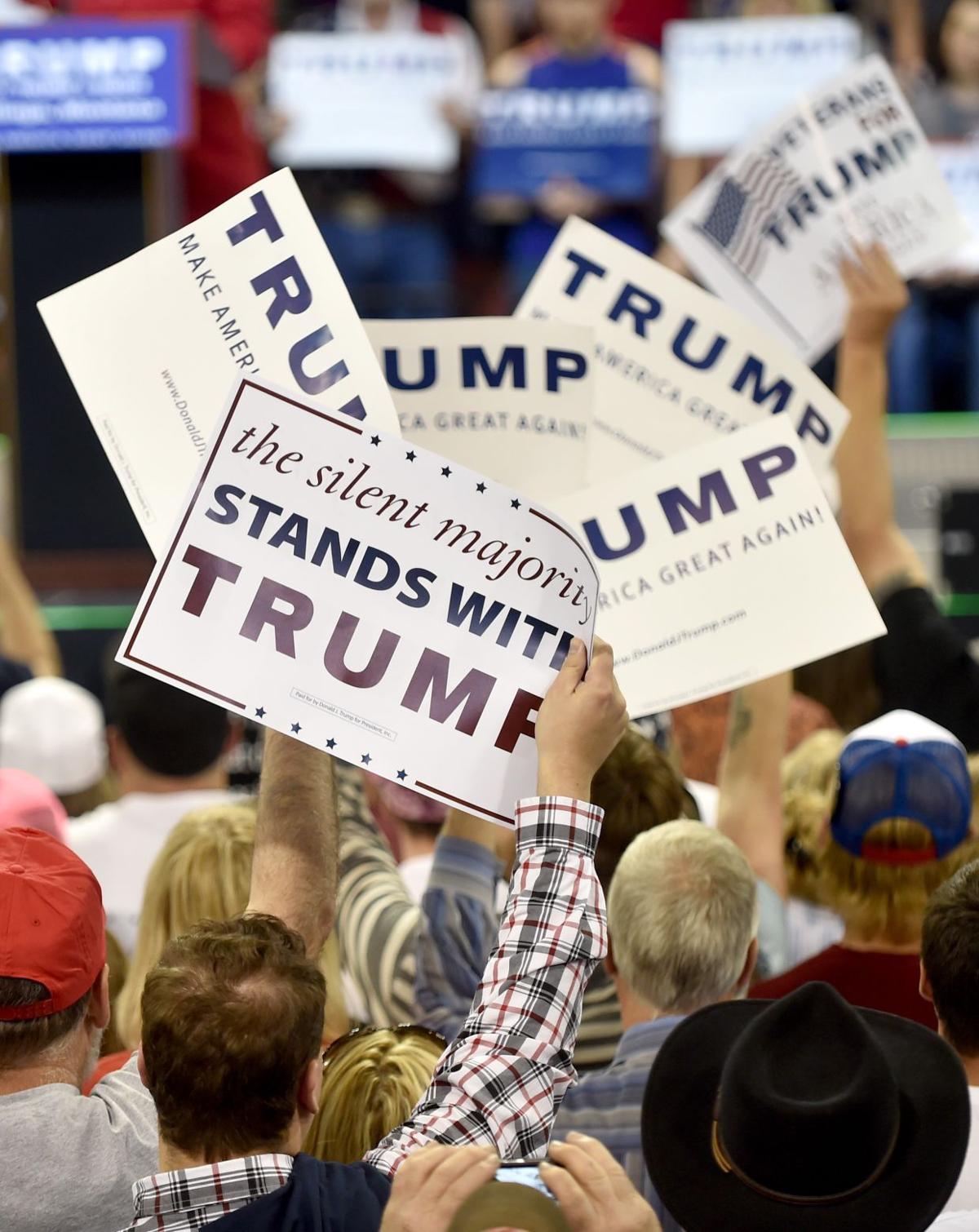 Supporters hold up Trump signs as they wait for Donald Trump to speak to thousands on Thursday at Rimrock Auto Arena at MetraPark. 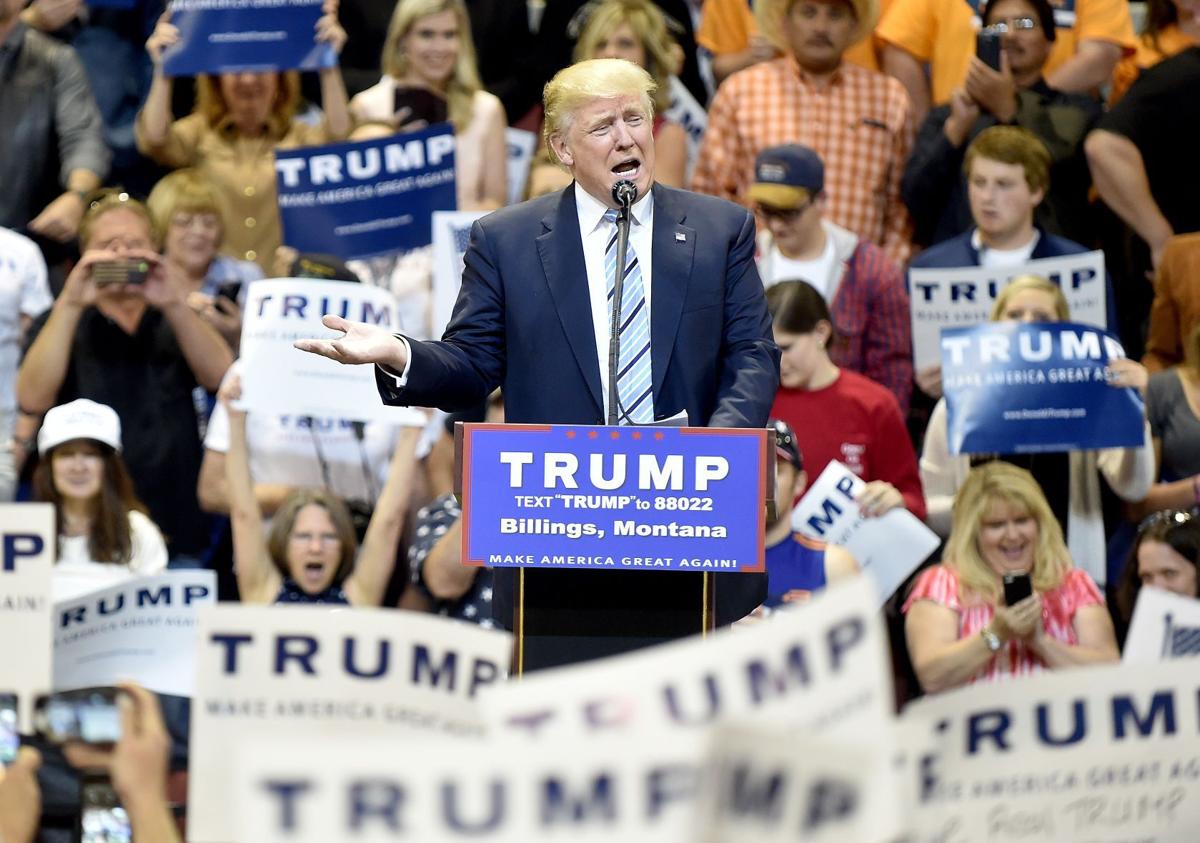 Donald Trump speaks to thousands on Thursday at Rimrock Auto Arena at MetraPark. 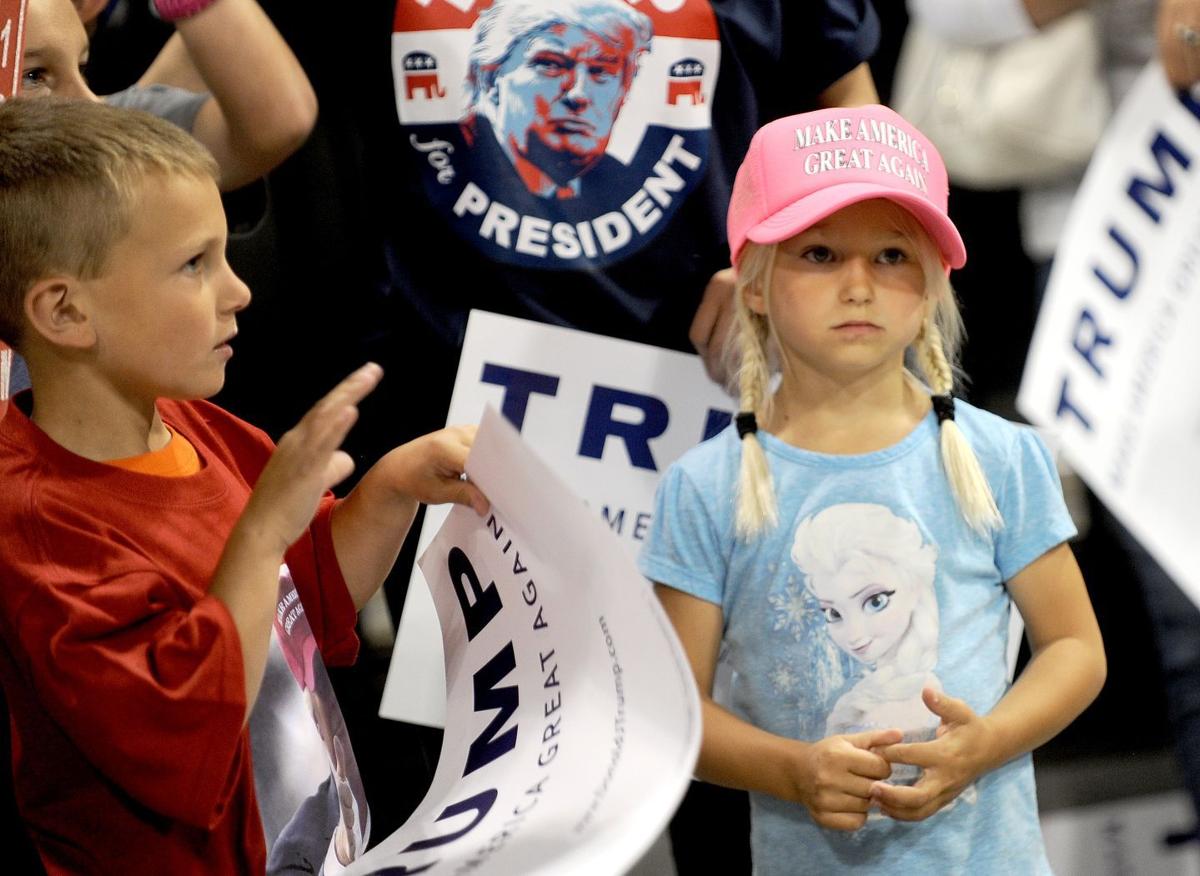 Camille Freese, 5, wears a pink "Make America Great Again" hat as she waits for Donald Trump to speak on Thursday at Rimrock Auto Arena at MetraPark.

No matter what Donald Trump said Thursday in the Rimrock Auto Arena at MetraPark in Billings, he could do no wrong. Before a crowd of several thousand, Trump riffed on oil, immigrants, trade deals and guns, never sticking with one subject long enough to see it to the end. He was the current champion of political scat jazz, the crowd floating The Donald’s stream of consciousness.

And then he was on to a different subject, punctuating his vignettes with unexpected shout-outs to the most unlikely of people to set foot in Montana’s largest city for a campaign rally.

“Harold Hamm, are you here? Harold, where the hell are you?” Trump said. And there was Hamm, the fracking pioneer who turned the Bakken into the Saudi Arabia of the Northern Plains, standing in the back of the room, grinning. “Oh, he’s got money. He knows more about energy in his finger than these other people.”

The oil magnate had played a key role in Trump’s energy speech earlier Thursday in Bismarck, N.D. Barry Switzer, the former coach of the Oklahoma Sooners and Dallas Cowboys got a shout-out, too, along with former Notre Dame coach Lou Holtz.

At one point, while talking about his victory in Florida, where Marco Rubio and Jeb Bush were mistakenly thought to be home-state shoo-ins to win, Trump abruptly paused and acknowledged a water bottle that had fallen from his podium and a hat thrown by a woman in the audience.

At other points he was more serious. Trump warned that the U.S. Supreme Court could see the replacement of three to five justices during the next presidential term. If a Democrat were to pick all the departing justices it would change the United States for decades.

“The court will never come back, and I’m not talking one issue or two issues, I’m talking about many issues,” Trump said. “We will become Venezuela,” which has replaced Greece as conservative America’s favorite cautionary meme of socialism’s dangers.

When he got to U.S. Rep. Ryan Zinke, R-Mont., Trump belted, “Where the hell is he, my man! He’s supported me from the very beginning, but it’s more his wife, right?” Lola Zinke was on the Trump train first, he said. It was a subtle way to pull both Zinkes into his speech.

Montana’s lone congressman introduced Trump to the crowd, warning the audience that a Hillary Clinton presidency would be disastrous for national security. He cited the terrorist attack on Benghazi as a Clinton failure and predicted worse to come under the Iran nuclear arms agreement.

The crowd loved it. They loved it when Trump proclaimed President Barack Obama as a gift to President Jimmy Carter’s reputation.

“He is the single best thing to happen to Jimmy Carter,” Trump said, “Because a lot of people are no longer looking at Jimmy Carter as our worst president."

Eating up Trump’s every word was a different kind of the Red Hat Society, mostly males, mostly white, with the words “make America great again” emblazoned above the bills of their ball caps. They were an audience of true believers, insisting like teenage fans of a red hot rock band that they were with Trump from the start, long before his meteoric rise to the top of the political charts.

When they were asked not to rough up protesters, should any surface, they chuckled. When he promised to build a wall across the nation’s southern border, they roared like a May storm dropping golf-ball-sized hail.

He was the billionaire they’d wanted to have a beer with, because they swore he was more like them than any of the other 16 Republican candidates who ran for president this election. And in the process of becoming presumptive Republican presidential nominee, Trump like many of them, had been counted out.

Wrobel was wearing a red Trump cap and sporting a giant red foam hand displaying an index finger pointed sharply in a No. 1 pose. Pierce said she bought it last fall after Trump flew into the Iowa State Fair in a helicopter to promote his candidacy.

After a 45-minute verbal sprint, Trump wrapped up by promising the crowd what has become his modern-day promise of not just a chicken in every pot, but more chicken than a pot can hold.

Democratic candidate Bernie Sanders and former President Bill Clinton, stumping for his wife, Hillary Clinton, have both made appearances in Billings. The Montana primary election is June 7.

Photos: Scenes from the Trump rally

Donald Trump is in Billings on Thursday. Here are photos from the event at MetraPark.

Thousands turn out for Trump rally at MetraPark in Billings

Jordan Loyda was halfway to Billings from the Flathead Valley where he makes his home when he remembered just how long the drive was.

Law enforcement agencies from local to federal levels coordinated in Billings on Thursday to protect Donald Trump and the people at his rally.

At least for Donald Trump’s most loyal Montana supporters, Saturday’s GOP delegate election results were not torn from the pages of The Donald…

In an hour-long speech, the former president worked to highlight the differences between Clinton and presumptive Republican nominee Donald Trump.

Sen. Bernie Sanders spoke frankly with The Gazette about a number of Montana issues before taking the stage in Billings on Wednesday.

Bernie Sanders reaches out to working class in Billings stop

Billings had a Berning love for Sen. Sanders on Wednesday night.

Could a Montanan be the next vice president of the United States?

WASHINGTON — Donald Trump claimed his place Wednesday as America's 45th president, an astonishing victory for the celebrity businessman and po…

Zinke and Trump have 'positive meeting' in New York Monday

Less than a year ago, Donald Trump was persona non grata in Montana GOP politics. The party office had no contact information for Trump's camp…

Bernie Sanders coming to Montana to campaign for Rob Quist

U.S. Sen. Bernie Sanders has announced that he will be campaigning across Montana in May to support the campaign for Congress of Democrat Rob Quist, a folk musician from the Flathead Valley.

Metra is ready for a busy day with Vice President Mike Pence and another event, officials say

A news website is reporting that President Donald Trump may visit Montana in the coming weeks as part of his effort to promote his tax plan.

Police, protesters gear up for Trump's visit to Great Falls

Donald Trump speaks to thousands on May 26 at Rimrock Auto Arena at MetraPark.

Rep. Ryan Zinke endorses Donald Trump before his speech to thousands in May at Rimrock Auto Arena at MetraPark.

Donald Trump shakes hands and signs hats for fans after his speech Thursday at Rimrock Auto Arena at MetraPark.

Audrey Miller, 15, of Bozeman painted her face with stars for the Donald Trump rally on Thursday at Rimrock Auto Arena at MetraPark.

Supporters hold up Trump signs as they wait for Donald Trump to speak to thousands on Thursday at Rimrock Auto Arena at MetraPark.

Donald Trump speaks to thousands on Thursday at Rimrock Auto Arena at MetraPark.

Camille Freese, 5, wears a pink "Make America Great Again" hat as she waits for Donald Trump to speak on Thursday at Rimrock Auto Arena at MetraPark.