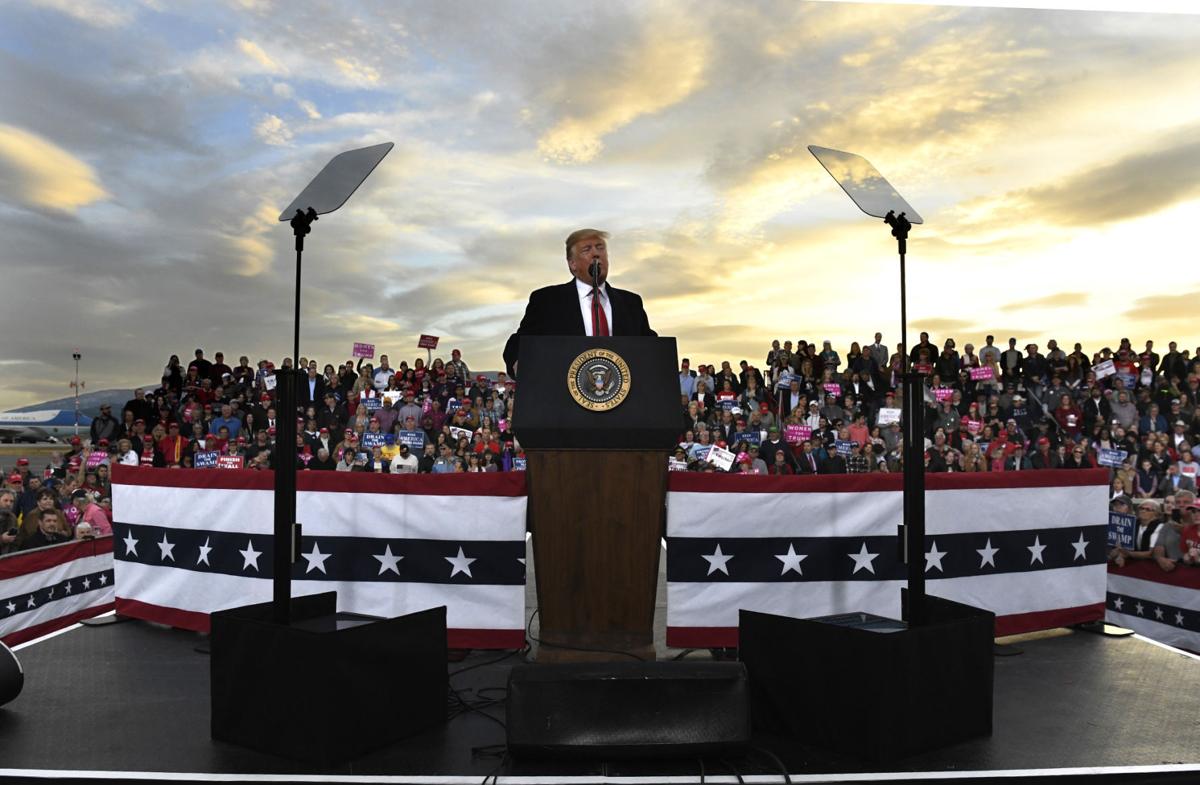 President Donald Trump speaks to a large crowd gathered Thursday evening at the Missoula International Airport during his third campaign trip to Montana this fall. 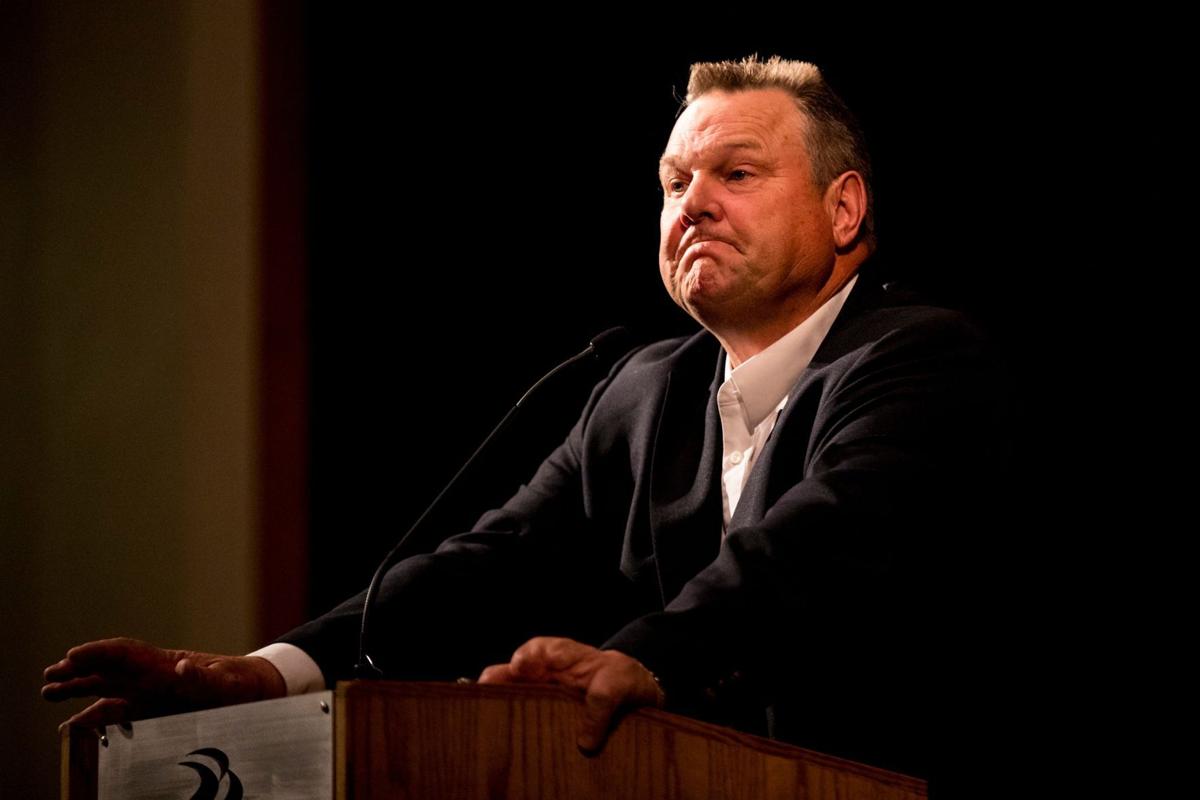 Sen. Jon Tester listens to questions during a town hall at MSU Billings' Petro Theater in Billings on Thursday.

The Trump administration is railing against a Montana senator for calling the federal government’s coronavirus response an “American failure."

In an email to the Montana news media, White House officials listed as proof of its effective response the amount of personal protective equipment shipped to Montana, while describing the state’s rate of positive COVID-19 tests as being within acceptable range. The description ran counter to assertions last Friday by Montana Sen. Jon Tester and three other Democrats describing the pandemic response and disastrous, while encouraging the president to do more.

“The Trump Administration continues to expend every effort to help Montana combat this plague," the White House email read. "Partnering with industry, the U.S. government has surged shipments of PPE to Montana with over 3 million masks (N95 and surgical/procedural), 95,000 face shields, almost 800,000 gowns, and 65 million pairs of gloves, delivered as of July 24. Over 6,000 tests have been conducted in a single day in Montana and the positivity rate has stayed below the recommended 5% since April. President Trump is committed to protecting and fighting for the great people of the Treasure State against this invisible enemy.”

The response came the same week the Washington, D.C., health department included Montana on its list of 14 high-risk states. Anyone visiting D.C. from those states who was traveling for "non-essential activities" must quarantine for 14 days once they arrive, according to a release issued Monday. Those traveling for essential reasons must monitor their health and seek care and self isolate if they show symptoms of COVID-19.

Tester, along with Democratic Sens. Patty Murray, of Washington; Patrick Leahy, of Vermont; and Richard Durbin, of Illinois, had written Trump on July 24, asking the president to lead a national response to the pandemic. The senators repeatedly described states as fending for themselves in the absence of a nationwide plan led by the president. They called on Trump to get federal money to states sooner and to improve COVID-19 testing.

“It is clear that the Administration's failure to lead on the procurement and distribution of PPE, or to marshal a comprehensive national testing and contact testing strategy has allowed the virus to spread and left the country in a very vulnerable position,” the senators wrote. “If it was not clear to this administration before, it should be clear now, wishful thinking and denying the problem will not protect American people or bring our economy back from the brink.

“It is well past time to change course," the senators wrote. "If there was ever a need for leadership at the federal level, it is here and now.”

Wednesday, Tester Spokesman Roy Loewenstein said the White House never gave a single example of where the senators’ assessment of the pandemic response was wrong.

“For months, Senator Tester has been in constant contact with Montana’s doctors and nurses on the frontlines of this crisis as they have saved lives without adequate supplies of protective equipment or a national testing strategy from this Administration," Loewenstein said. "It’s unclear why the White House is more focused on pushing anonymous statements in the press than working with him to help Montana’s frontline workers, but Senator Tester will keep fighting to hold the White House accountable and get Montanans the critical supplies needed to slow the spread of the virus and get folks back to work."

The senators had focused on three things: a second shortage of personal protective equipment for health workers in states where COVID-19 is surging; the slow release to states of federal funding approved by Congress four months ago; and a need for increased testing as a part of a national plan to combat the virus.

Their examples reflected concerns expressed by states in recent weeks, starting with the scramble for adequate processing of COVID-19 tests as the nation’s biggest labs become overwhelmed. Last week Quest Diagnostics, the nation’s largest private processor of COVID-19 tests, informed states it would take more than two weeks to process the current high volume of tests. Quest also indicated the testing problem would get worse in the fall as flu season hit.

States scrambled for a plan B after the Quest notice. Some, like Montana, announced that state universities would take over some testing, while some lab work was contracted to professionals other than Quest. In the weeks leading up to the announcement, some Montana communities had already began cutting back on asymptomatic testing in order to respond to a spike in the number of Montanans showing symptoms and needing tests. Missoula County paused asymptomatic testing July 8.

Wait for COVID test results goes from bad to worse, though turnaround times vary widely by state and lab.

Tester and the other senators called for a national testing response that didn’t compel states to compete for services among themselves.

Additionally, the senators pointed to $25 billion for testing in the Paycheck Protection Program, which was created by Congress in March. Less than half that money has been spent, the senators said.

The concerns about unspent funding resembled those of Montana Republicans in some counties who have said Montana Democratic Gov. Steve Bullock has been slow to pass federal funding to local governments with COVID-19 debts. The governor’s office last week said $300 million for local governments had been allocated, meaning the state had recognized that amount for a future payout. On July 23, the state Legislative Fiscal Division of the Montana Legislative Branch reported that most of the federal money that Montana had received for COVID-19 laboratory spending was unspent. In each case, the spending period for the funds extended into 2021.

The Trump Administration countered that it has a national defense strategy against COVID-19, which it referred to with the derogatory term “China Virus.” That plan used private labs to improve testing speed, while the government secured PPE and paid for early manufacturing of potential COVID-19 vaccines. The idea of funding vaccine manufacturing ahead of federal drug approval has been credited to Republican Steve Daines, of Montana. Federal funding has been used “to start up factories and deliver PPE on time,” the White House spokesman wrote.

“The CDC has an effective and robust testing and contact tracing system that has limited the spread of the virus and kept the death rate among the lowest in the world,” was the last line of the email.

The United States COVID-19 death toll surpassed 150,000 people Wednesday, according to tracking by Johns Hopkins University. The United States was adding more than 61,000 new cases a day, down about 10,000 cases a day from earlier in July. The U.S. is not only among the 10 most affected countries for new COVID-19 cases, according to Johns Hopkins, it has the most daily confirmed cases per 100,000 people on a five-day moving average for countries with populations of at least 1 million.

The Trump administration's email response to Tester's letter was a rare public reply to the many letters issued by the senator. It comes less than 100 days before the general election, which will include a tight race between incumbent Daines and Bullock for one of Montana's Senate seats. Daines is in a seat Republicans must hold to maintain a Senate majority.

As details about a fourth round of the federal COVID-19 relief spending surface in the Senate, Montana lawmakers are putting forth what they w…

The state's data dashboard also reported an additional death, for a total of 55 statewide.

Active cases of coronavirus in North Dakota dropped for a second straight day on Thursday, but officials reported the state's 103rd death.

The construction site of a $400 million luxury resort in Big Sky has led to at least 116 COVID-19 cases in July, public health officials confirmed to Montana Free Press.

With the U.S. Senate deadlocked as the additional $600 in weekly federal unemployment benefits meant to supplement state benefits expires at midnight Friday, both of Montana's senators called for action while placing blame on the other party.

President Donald Trump speaks to a large crowd gathered Thursday evening at the Missoula International Airport during his third campaign trip to Montana this fall.

Sen. Jon Tester listens to questions during a town hall at MSU Billings' Petro Theater in Billings on Thursday.