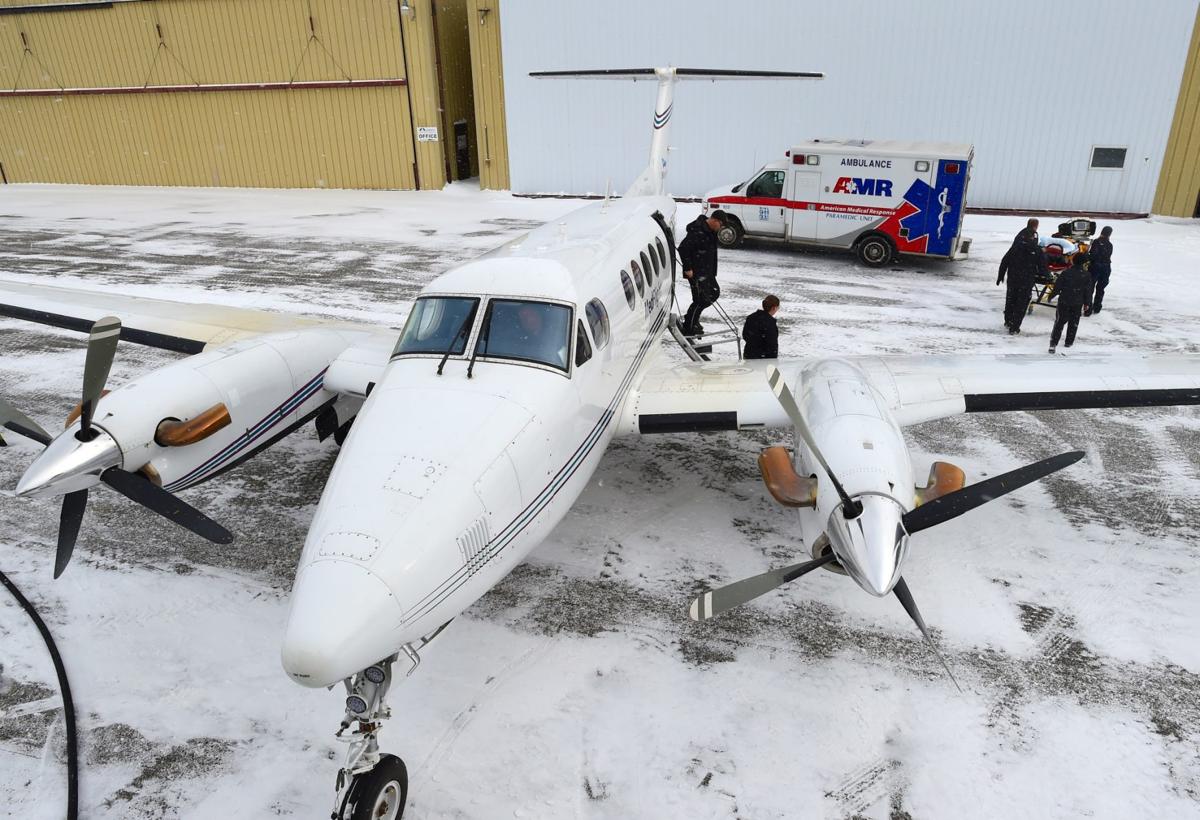 A patient is taken to an ambulance at the Billings airport after being flown from the Hi-Line in a Billings Clinic MedFlight Beechcraft King Air in this 2015 file photo. The hospital's fixed-wing organization serves an area of 188,000 square miles and has a collegial relationship with St. Vincent Healthcare’s air team and works closely with Benefis’ crew. 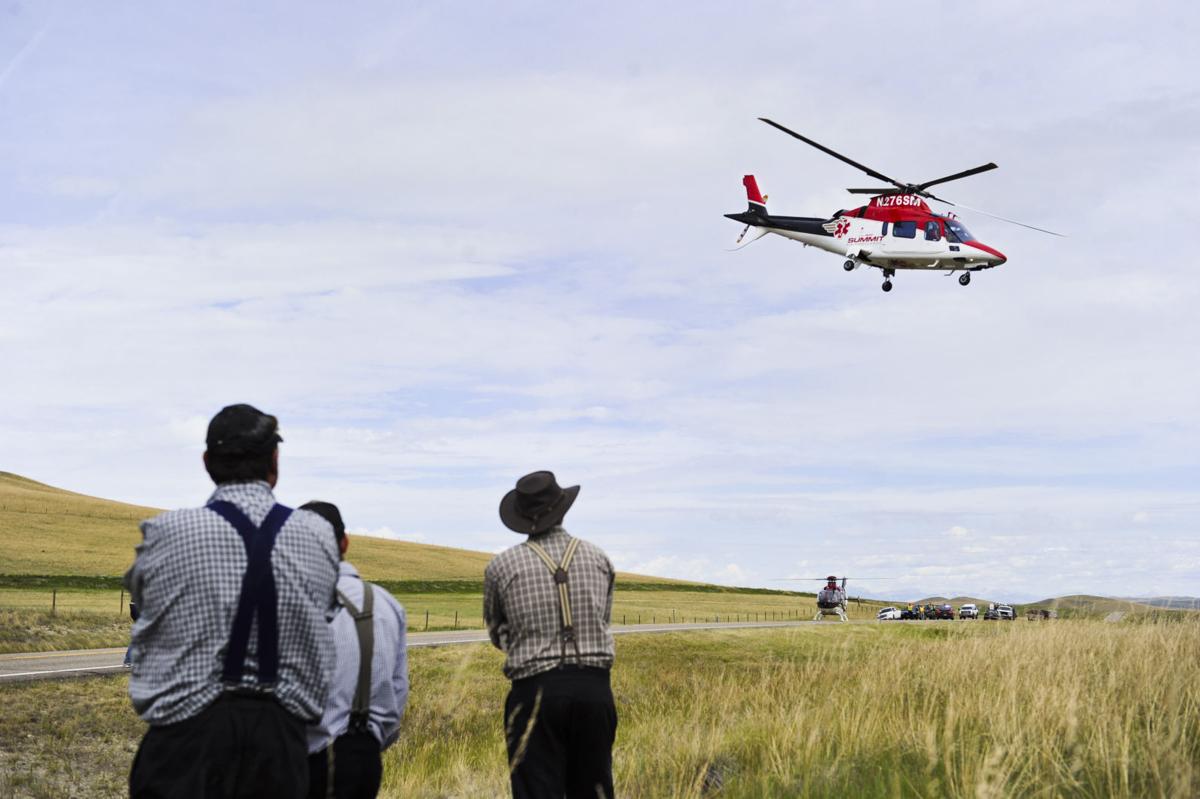 A Summit Air Ambulance helicopter takes off from a head-on collision on Highway 287 on July 15. Three people died and five were injured in the crash.

A patient is taken to an ambulance at the Billings airport after being flown from the Hi-Line in a Billings Clinic MedFlight Beechcraft King Air in this 2015 file photo. The hospital's fixed-wing organization serves an area of 188,000 square miles and has a collegial relationship with St. Vincent Healthcare’s air team and works closely with Benefis’ crew.

A Summit Air Ambulance helicopter takes off from a head-on collision on Highway 287 on July 15. Three people died and five were injured in the crash.

HELENA — Why can St. Vincent Healthcare in Billings profit from its medical flights while private companies that often bill more than the hospital say they won’t contract with insurers because they don’t pay enough to turn a profit?

The state auditor’s office received more than 20 complaints last year from Montanans who have received large bills for the medical flights, some more than $100,000.

The office got a call last week from a woman whose son required a flight from Bozeman Deaconess to a Denver hospital. The flight cost $100,000 and she received a "balance bill" of $90,000, Laslovich said.

St. Vincent Healthcare Chief Flight Nurse Chad Cady said his program is expensive to run, perhaps one of the more costly in the state because of the types of services it offers — but it still makes money and doesn’t shift costs to other departments in the hospital.

“It is a very expensive entity to operate, but when I have to look at my budget and justify it to my CFO and explain if we are in the red or are we in the black, the numbers show it.”

Bill Bryant, who works with REACH Air Medical Services, which operates Summit air ambulance in Helena and Bozeman, said hospitals can shift overhead costs around to help make their programs profitable and cited previous testimony from Missoula’s St. Patrick’s CEO that the facility lost $1.6 million a year on its program before shutting it down. Summit does not contract with insurers but has said it has started talking with one about the possibility.

“If they were adequate, both of those hospitals would at least be breaking even,” he said.

An independent review by an industry analyst has shown Summit has charged patients $15,965 per takeoff and $175 per mile on a fixed-wing flight.

Northeast Montana STAT Air Ambulance has been on both sides. When it was part of Frances Mahon Deaconess Hospital, STAT could share the cost of some employees like nurses with the hospital, but lost that ability after 2007 when it became a standalone provider for a four-hospital co-op that covers a large part of that remote corner of the state.

That year, Clay Berger, Northeast Montana STAT air ambulance cooperative program director, said it took 300 percent of what Medicare reimburses for flights to make a 10 to 15 percent profit. "That is why we enjoy that Allegiance contract of 250 percent, but when you get down into those areas of Medicaid, Medicare … we’re going backward."

Some providers are open to sharing what they charge per flight — a breakdown of the rate-per-mile once a patient is onboard and the fixed fee charged per takeoff — while some, typically the independent ones, aren’t. What’s not known now is how much flights cost the providers, something that would help show why St. Vincent can make a profit but others say they can’t.

At the meeting, Ronald Dewsnup, president and general manager of Allegiance Benefit Plan Management, said he could provide information on all air ambulance claims his company has dealt with before the next meeting April 7.

Insurers want to know the exact costs for providers so they know what percentage of costs they’re paying, and providers say they want to get equal, fair payments from insurance.

Bryant said it’s critical to look at the payer mix providers deal with — what percentage of people who receive flights are insured by Medicare, Medicaid, private insurance or who don’t carry insurance. That varies widely from county to county and affects how successful an operation is.

NorthWest MedStar, which is represented on the committee by business services manager Russell Hancock, is joining the Life Flight air ambulance network starting April 1. Life Flight has not participated with any interim committee work done in the past, but Hancock said he will continue to be a part of the working group representing Life Flight.

The next meeting of the Economic Affairs Interim Committee, which is looking at the air ambulance issue, is April 14.

Planned increases in Montana Medicaid co-payments went into effect statewide on June 1, and, while providers and clients knew they were coming…