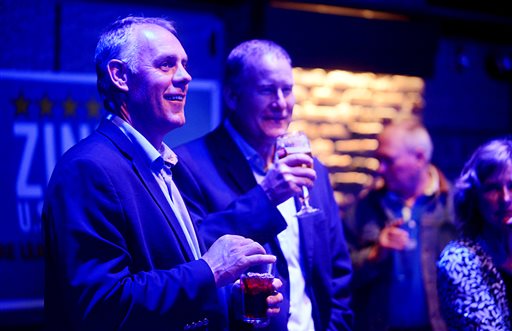 Ryan Zinke, left, and others watch as the results come in from a close five way House GOP race at Casey's Bar in Whitefish on Tuesday. 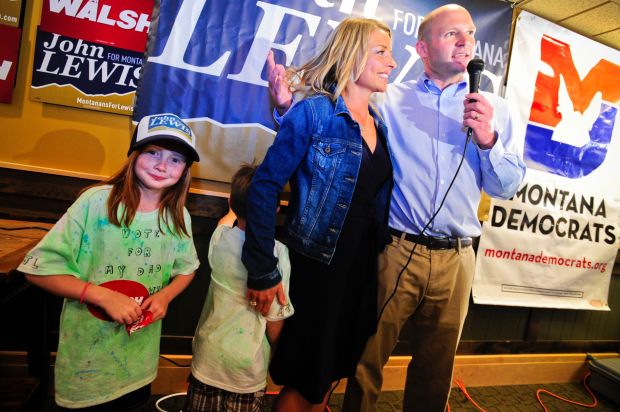 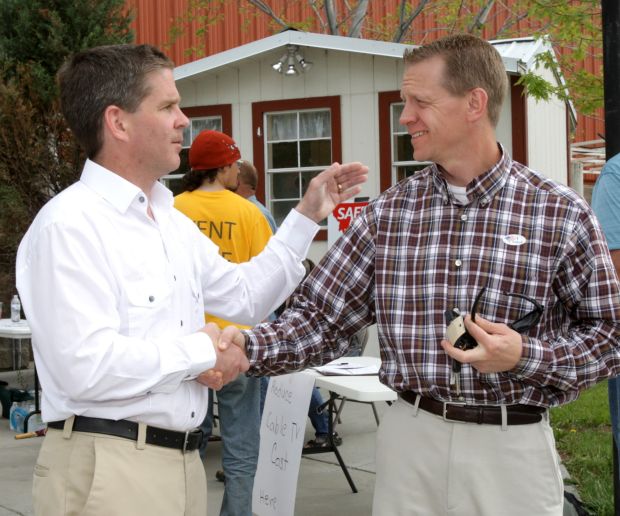 HELENA — Ryan Zinke, a former state senator from Whitefish, won a tightly contested Republican race for the U.S. House early Wednesday, while John Lewis rolled to a decisive victory over John Driscoll in the Democratic race.

The two men will face off in November for Montana’s open U.S. House seat. Also on the ballot will be Mike Fellows, a Libertarian candidate from Missoula.

The Associated Press called the race for Zinke at 1:16 a.m. Wednesday.

Zinke pulled past Corey Stapleton, a former senator from Billings who had taken the early lead, and defeated him by nearly 4,800 votes, with 91 percent of the precincts reporting. State Sen. Matt Rosendale of Glendive was third, followed by state Sen. Elsie Arntzen of Billings and Drew Turiano of Helena.

Here are the unofficial results with 91 percent of the precincts counted, according to the AP:

Zinke, reached by the State Bureau Tuesday night, said, “In this race, it’s a race about truth and it’s a race about the future of the Republican Party. I do think America is not only fixable, but we can rebuild and restore American exceptionalism. Ultimately it’s about the working family to make sure the American dream is viable.”

Stapleton, who grew up in Great Falls in Cascade County, had no immediate comment with the race still not called earlier Tuesday night.

The Republican primary race has been a tightly contested race between Zinke, Stapleton and Rosendale.

Zinke, who had raised the most money, came under attack by three former state GOP chairmen who contended his conservative campaign positions didn’t match his moderate voting record in the Senate. Zinke disagreed.

Meanwhile, on the Democratic side, Lewis, a former aide to Sen. Max Baucus making his first race, took a big lead that held up through the night over Driscoll, a former Public Service Commissioner and a frequent candidate. Both are from Helena, although Driscoll previously lived in Hamilton.

“I’m incredibly humbled by the support I received across Montana,” Lewis said. “It was pretty consistent in rural and urban areas. It reflects that people are responding to our vision for the future of Montana. That’s fighting for good-paying jobs. It’s fighting for working families, and it’s fighting for education and workforce development. These are all related.

With returns from 85 percent of the precincts, here were the results in the Democratic primary:

Six years ago, Driscoll pulled a major upset to win the House Democratic primary while raising no money against the Democratic establishment candidate, Jim Hunt. Driscoll declined to raise or spend any money then.

This time, Lewis got in the race early, beginning his campaign last fall, and has campaigned in all 56 counties. Driscoll filed shortly before the March 10 deadline. Once again Driscoll isn’t raising money, but said he would if he wins the primary.

Lewis, 36, is a Billings native who was raised in Missoula. He is a graduate of Western Washington University. He worked on the staff of U.S. Sen. Max Baucus for 12 years, including three years as his state director before resigning in August.

This is Lewis’ first run for public office.

Driscoll, 67, is a Los Angeles native who was raised in Hamilton. He is a graduate of Gonzaga University and has master’s degrees from Columbia University, Harvard University and the University of Montana. He is a retired colonel in the Montana National Guard who now writes nonfiction.

He is a former state representative who was speaker of the Montana House in 1977 and served on the Public Service Commission for 12 years. This is his sixth attempt to win a statewide race.

On the Republican side, Zinke, 52, is a Bozeman native who was raised in Whitefish. He has a bachelor’s degree in geology from the University of Oregon, with master’s degrees from National University and the University of San Diego. Zinke served for 23 years as a Navy SEAL.

Zinke is CEO of two consulting firms. In 2012, he was an unsuccessful candidate for lieutenant governor on a ticket headed by Neil Livingstone.

Rosendale, 53, is a Baltimore native who moved to Montana in 2002 and is a rancher and real estate developer. He is a graduate of Queen Anne’s County High School in Centreville, Md.

Stapleton, 46, is a Seattle native who was raised in Great Falls. He has a bachelor’s degree in engineering from the U.S. Naval Academy and a master’s degree from Temple University. He was a naval officer for five years and now works as an investment adviser in Billings.

He served eight years in the Montana Senate and was minority leader in 2007. Stapleton was runner-up in the seven-way primary for the Republican nomination for governor in 2012.

She served eight years in the Montana House before her election to the state Senate in 2012.

Turiano, 40, is a New York native who moved to Montana in 2006. He has a bachelor’s degree in political science from Pace University in New York and a master’s degree from Fordham University. He buys investment properties.

He lost a primary race for secretary of state in 2012.

Photos from the Montana primary election

HELENA — Montana voters will decide Tuesday the Democratic nominee in the campaign for U.S. House. Democrats see the open seat as their best c…

HELENA — Democratic U.S. House candidate John Lewis said he is someone focused on finding solutions and is willing to work with people from bo…

HELENA — Democratic U.S. House candidate John Driscoll said he has an ambitious agenda if he is elected as Montana’s next congressman.

Editor’s note: This concludes a series on the five Republican candidates for the U.S. House. Stories on the two Democratic House candidates ra…

Editor's note: Stories on each of the five Republican candidates for the U.S. House are continuing today.

HELENA — Former state Sen. Corey Stapleton of Billings has a standard answer when he’s asked why Montanans should vote for him in the five-way…

Arntzen describes herself as optimist in race for GOP House nomination

Editor's note: Stories on each of the five Republican candidates for the U.S. House will run starting today.

Turiano says he’s his own man in House race

Editor’s note: Stories on each of the five Republican candidates for the U.S. House are continuing today.

Election results from around Eastern Montana

There were lots of clear favorites in Eastern Montana GOP primaries.

HELENA — Montana voters were deciding Tuesday whether to nominate U.S. Sen John Walsh for the seat Gov. Steve Bullock appointed him to, and wh…

HELENA — Democratic Sen. John Walsh and Republican Rep. Steve Daines were just selected as their party nominees for the U.S. Senate, but their…

Ryan Zinke, left, and others watch as the results come in from a close five way House GOP race at Casey's Bar in Whitefish on Tuesday.