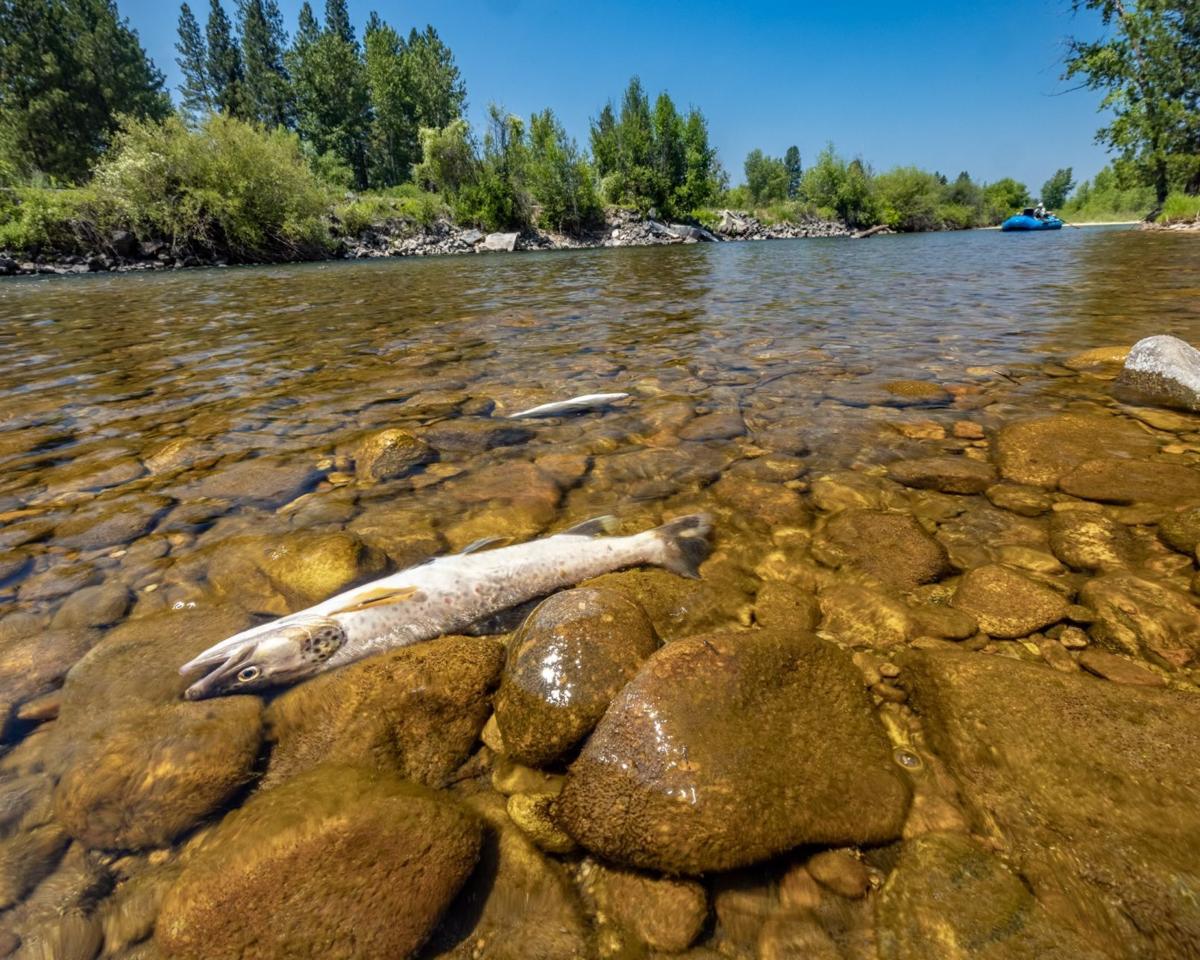 Dead trout lie on the edges of the Bitterroot River in mid-July after an extended heat wave raised water temperatures beyond what fish can endure without stress. 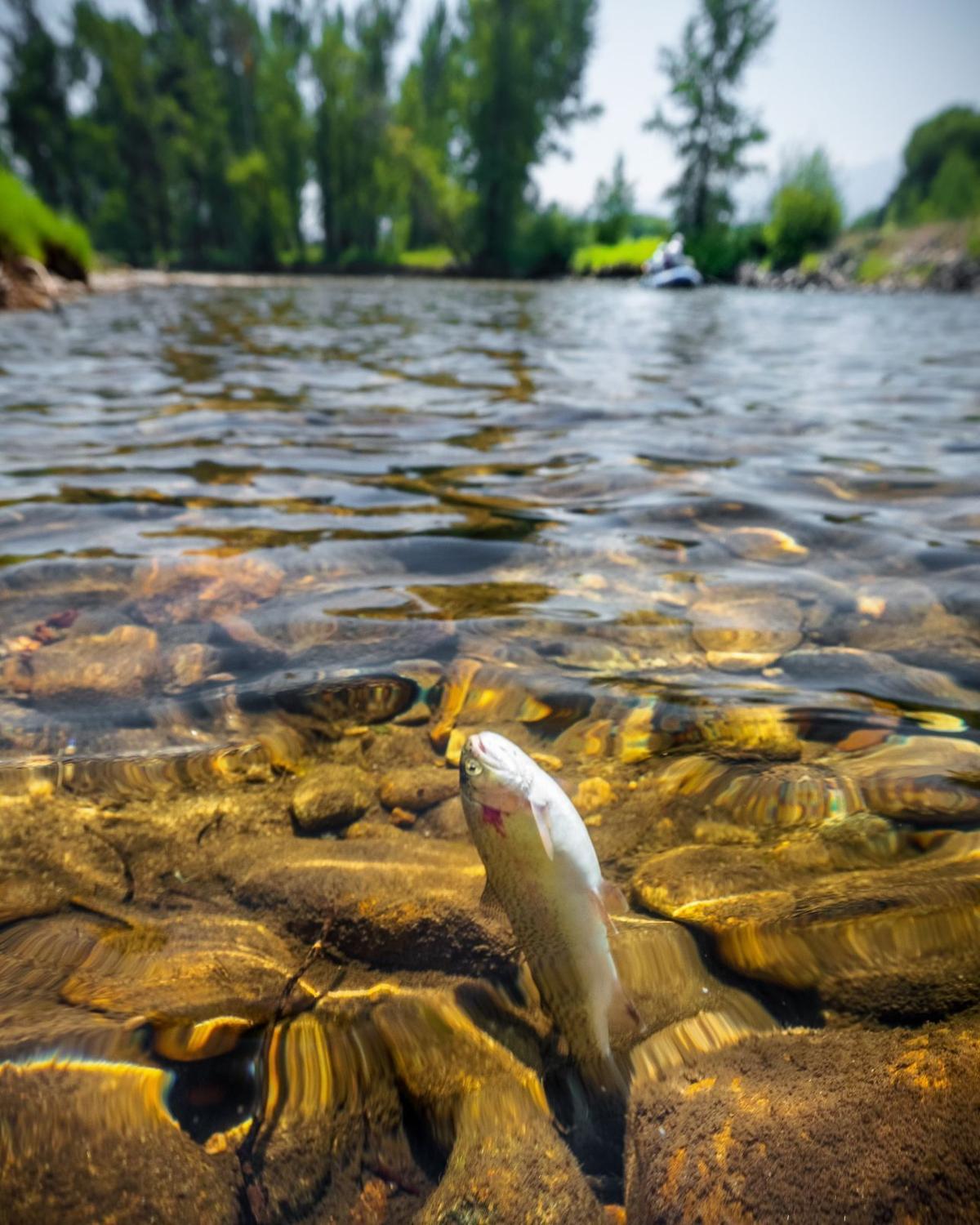 A cutthroat trout bleeds from the gills after probably being mishandled by an angler who didn't unhook it properly.

Wade Fellin wanted a break from chasing fish as a job, so he spent a day snorkeling in the Bitterroot River.

“I was excited to show my wife how many fish are down there, but we just got sick to our stomachs,” the owner of the Big Hole Lodge in Wise River said last week. “There were two cutthroats bleeding out — their gills pumping blood. Being in the water watching a fish die is pretty horrific.”

That scene was repeated numerous times as the Fellins found more and more dead or dying fish in one of Montana’s most popular angling destinations. Similar reports have come from the Clark Fork, Big Hole, Beaverhead, Jefferson and many other rivers across western Montana this summer.

July’s long stretch of unseasonably hot days has pushed water temperatures right to the edge of threatening for rainbow, cutthroat and brown trout, according to Department of Fish, Wildlife & Parks fisheries manager Pat Saffel. That may trigger afternoon restrictions, known as “Hoot Owl” rules, earlier than usual this summer.

“It’s a bit unique this year to have those early, 100-plus degrees that shot (water) temps up, but then it leveled off or even declined with the smoke,” Saffel said. “The extended ‘almost hitting criteria’ trend in temps is something new.  We’ll need to consider how to handle this situation.”

While wildfire smoke ruining the air quality and scenic views is generally considered bad, it actually helps fish by reducing the sun’s impact on water temperatures.

Trout get stressed when rivers approach 70 degrees. That leaves them with little energy to fight when hooked by an angler, or to recover after being handled. Anglers have reported seeing many dead trout with blood coming from their gills, indicating they did not survive a catch-and-release episode.

Meanwhile, anglers on the Beaverhead and Big Hole rivers are seeing trout and whitefish with large lesions, as well as the occasional dead fish. FWP fisheries biologist Matt Jaeger said no one knows what is causing the sores, although it’s known that low, warm water is stressing fish.

However, that doesn’t explain why fish with lesions are showing up even on the Beaverhead’s cooler stretches.

“Until we have a smoking gun from testing fish or a pathogen, it’s all just hypothesis,” Jaeger said.

One angler on the Big Hole below Maiden Rock captured a photo of a pod of whitefish with large lesions that looked like a bald spot between their eyes, Jaeger said. Some anglers are also reporting strange fish behavior, almost as if their air bladder was malfunctioning.

Hoot Owl restrictions prohibit river fishing between 2 p.m. and midnight on stretches of river that have been warmer than 73 degrees for three consecutive days. However, many anglers argue that trout stress out at temperatures above 67 degrees.

Long periods of hot weather pose a different problem for river wardens. Anglers and fishing guides need to know what’s OK to do, especially when guiding clients who come with reservations and pay hundreds of dollars a trip. A water temperature threshold is good for rule-making, but trout can still get in bad shape after too many days of warm water just below that standard.

“Coming up with criteria and transparent process and rules sometimes doesn’t effectively deal with all potential scenarios,” Saffel said. “However, the alternative would be to make the call as conditions present themselves, and this would lead to more confusion. I think having a clear and transparent process that we stick to is important for businesses and people planning trips.”

And that’s just for the people who are paying attention. Many river visitors come on their own, unaware of the challenges surrounding their recreational pastime.

Fellin and his fellow guides are seeing far more anglers chasing trout this summer than they did in 2019, which itself was a big-business year, he said. Many of them appear to be newcomers, who aren't familiar with how to handle a stressed fish.

“The ‘pan-danglers,’ the pandemic anglers, are here in force,” Fellin said. “Last year about 60 percent of our reservations didn’t come to the lodge. This year they rolled over their guide trip and they’re here. Everyone else bought boats and fly rods, everything got back-ordered, and now they have it.”

But what they also have, according to the pictures Fellin sees posted on social media, is little understanding about how to unhook a fish, how quickly it can be harmed while being held up for a photo, and its chances of survival after fighting a fly rod.

“It may swim off, and you feel good about it,” Fellin said. “But snorkeling the river was proof the fish swim away and die.”

Montana adds 664 COVID cases in last week, hospitalizations at highest average since May

Montana has averaged 71.6 COVID-19 patients in hospitals over the last week, the highest seven-day average since May. The state sits at 48.9% fully vaccinated.

An emergency airplane landing south of Hamilton led to the arrest of two Helena residents on felony theft and drug charges.

Sheridan County officials are asking the public for assistance in finding a man from Plentywood who went missing over the weekend.

Wildlife officials had to tranquilize the bear and move it by boat elsewhere in the park in the hope that tasting human food won't make the animal a recurring danger to people.

After Jordon Earl Linde was arrested Tuesday morning, his bond was set at $1.5 million, according to Undersheriff Clay Herbst.

In the past 20 years, Montana Fish, Wildlife & Parks has called its Smith water right 11 times and the Shields water right six times.

Dead trout lie on the edges of the Bitterroot River in mid-July after an extended heat wave raised water temperatures beyond what fish can endure without stress.

A cutthroat trout bleeds from the gills after probably being mishandled by an angler who didn't unhook it properly.