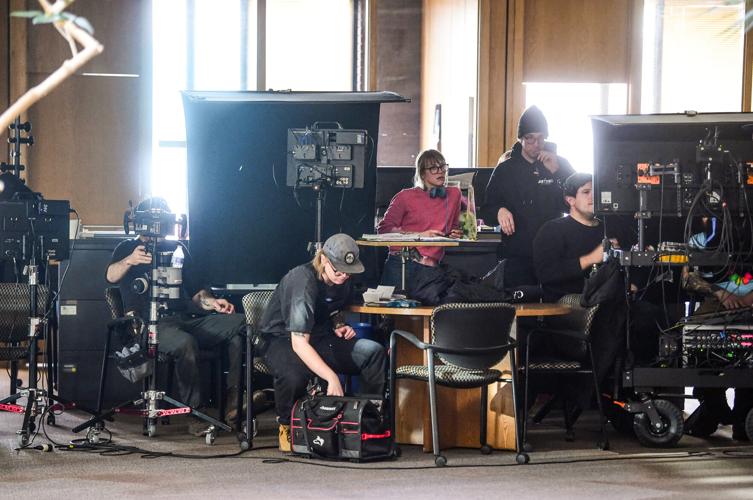 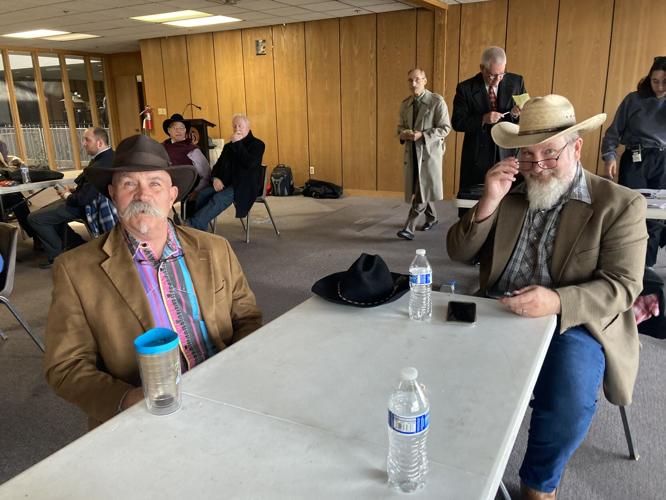 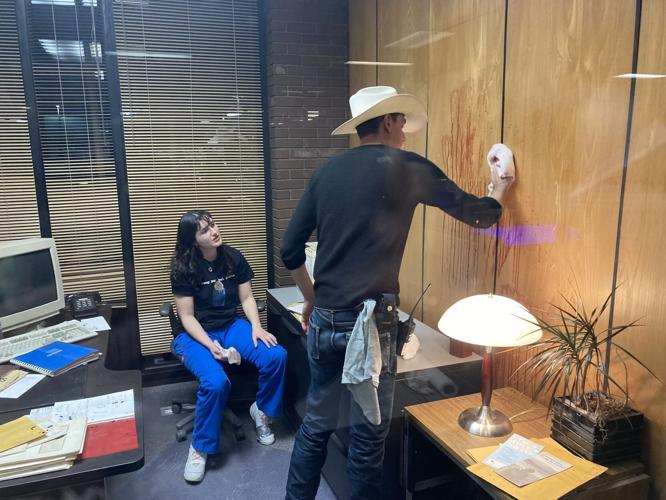 Set designers remove fake blood from the wall of an office at the Billings Gazette.

And the Academy Award for best fleeting glimpse of a background extra goes to......

On Wednesday, that caper took over the Billings Gazette building where, under the bright lights of a movie set, a fake gun was fired, fake blood was spilled, and an enraged crime boss smashed up real office furniture.

A few weeks ago, as the film’s producers were planning what scenes they’d film in our building, a casting director invited Gazette employees to work as extras. We’d have to be in the building anyway, putting out the daily paper as usual, we may as well pitch in.

The day before filming, our little troupe of Gazette extras, with some other community members, were assigned into several character groups, “stuffy businessmen” “office workers,” “portly managers” and “western wear businessmen.”

Cast against type, I was assigned to the western wear group and had to scramble to raid the closets of friends for boots, a cowboy hat and a bolo tie. A wardrobe assistant topped off my ensemble with a blue polyester western-yoked Gucci jacket with fringe on the sleeves, something only Hollywood would imagine a real Montana businessman would wear. Our photographer Amy Nelson’s secretary outfit included a bygone string of pearls. And our IT guy wore the kind of garish multi-colored denim snap shirt that would have made ‘90s Garth Brooks swoon.

Early on the day of shooting, the film crew of 20 or so people filled our parking lot with utility trucks, actor’s trailers, shuttle vans, a caterer, and some pre-‘90s cars for a street scene. All of the extras and other hangers-on scanned the crowd of visitors hoping to spot one of the stars. “Is he someone?” one Gazette employee asked me pointing to a tanned man in the parking lot flapping his arms to stay warm. I didn’t know.

Speaking of stars, we’ve been sworn to secrecy about the name of the film and who’s in it. The movie company plans a big publicity to-do in a few weeks and the handsome young lead actor is so hot in Hollywood right now that producers don’t want weird fans charging into Billings to hunt him down for a selfie.

But, anyone with half a minute on Google can figure it out. The film already has a Wikipedia page and an IMDb listing. And, the handsome young lead has already done an interview with the Hollywood Reporter in which he says he’s ready to “get gnarly in this indie thriller.”

The truth about appearing in a blockbuster movie is that it’s mostly boring. As extras, the real talent we drew on was a talent for scrolling mindlessly on our phones while waiting for our scene to be called. The waiting left plenty of time for my mind to wander, imagining myself gliding down the red carpet at the Academy Awards, wondering who I’d get to slap after accepting the Oscar for Best Extra.

The tedium is true for some on the crew, too. Once their specialist tasks are completed, they wait like everybody else. One sound engineer sitting in front of a panel of lights and dials would occasionally glance at one small monitor and smile. When I peeked over his shoulder to see what he was looking at he was watching a New York Rangers game on an iPhone.

My big scene came when my group of six or seven “western wear businessmen” assembled around a conference room table to listen to a futile pitch from one of the characters playing a down-on-his-luck traveling salesman. Our one acting instruction was to look bored.

Several of the scenes were laboriously set, with each specialist doing their thing. One woman, a continuity supervisor, took countless photos to ensure consistency between takes. Film nerds love mocking errors in films where something like an actor’s tie is loose in one part of a scene but tightened in another. One guy, a gaffer, carried about 20 rolls of tape on a harness like a bandolier. Another woman seemed to do nothing more than clap the clapperboard. There was a movie effects guy who expertly mixed a few pints of fake gore for a death scene, at one point telling an assistant, “I need more chunks.” And there was another guy I presumed was one of the directors because he was wearing a scarf.

After all this careful setting up, there were several rehearsals using crew members as stand-ins for the stars (still in their trailers). Adjustments were made, picture frames nudged, water glasses pushed a skoosh, blood stains from previous takes scrubbed, and then the stars appeared out of nowhere for their shot.

And then, late in the evening, they were done. The crew applauded. All of the stars but the lead graciously posed for selfies, and we extras waited for our not exactly Brad Pitt-sized paycheck, $150.

Can’t wait to see the Gazette on the big screen. There will be blood.

In 2021, the Department of Fish, Wildlife & Parks sold more than 66,600 nonresident deer and elk licenses.

Montana beef processing ramps up with help from feds, but more butchers are needed

Starting a ranch from scratch is no easy task, but Heidi and Gary Todd were determined to do so. They’d measure their revenue in pennies per p…

The crash knocked loose the semi-truck's windshield. Snow poured in and filled the cab. It solidified, and both men were trapped.

Hunting is allowed only in narrow areas near the park border, concentrating hunters in what’s been described as a firing line.

Lawmakers say a fatal bounty hunt in Butte was a "tipping point" to bail bond legislation at the Statehouse in Helena.

FWP launched the multiple-state investigation in 2015, after Cole “Sonny” Lawson III of Walterboro, S.C., was questioned at a Missouri gas station by a conservation officer.

The reforms come with some subtext as the state still faces litigation against bills the 2021 Legislature passed, which has featured some procedural maneuvers Republicans have rebutted as unfair.

Bill would make e-bike access the default in Montana

Under the bill, e-bikes would be allowed anywhere that regular bicycles are allowed, including streets, highways, roads, bike lanes, and bike- or multi-use paths. 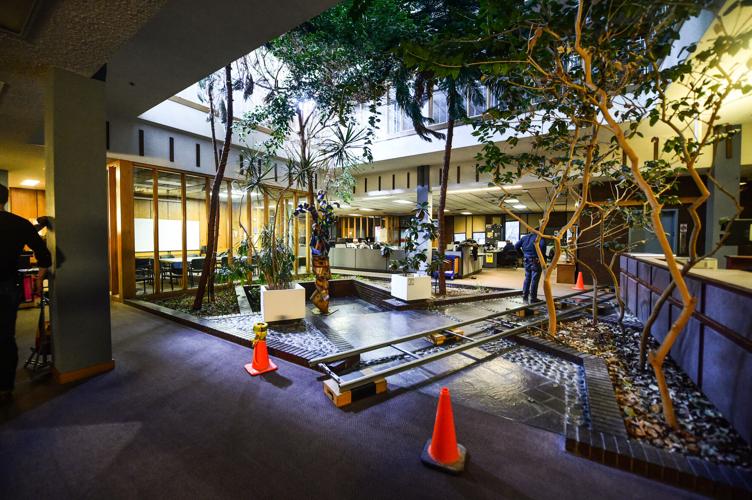 The film crew for the new Hollywood movie sets up a track for the camera near the entrance to the building at the Billings Gazette ahead of filming an important scene on Wednesday, Nov. 30. 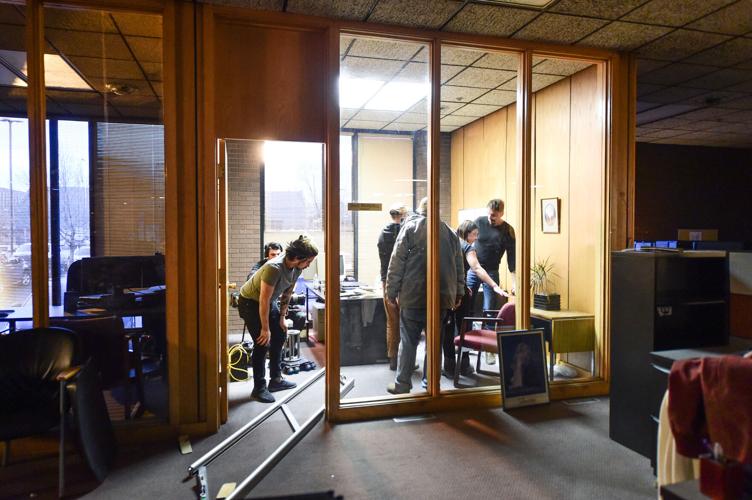 The film crew for the new Hollywood movie sets up in Billings Gazette President Dave Worstell's office at the Gazette on Wednesday, Nov. 30. 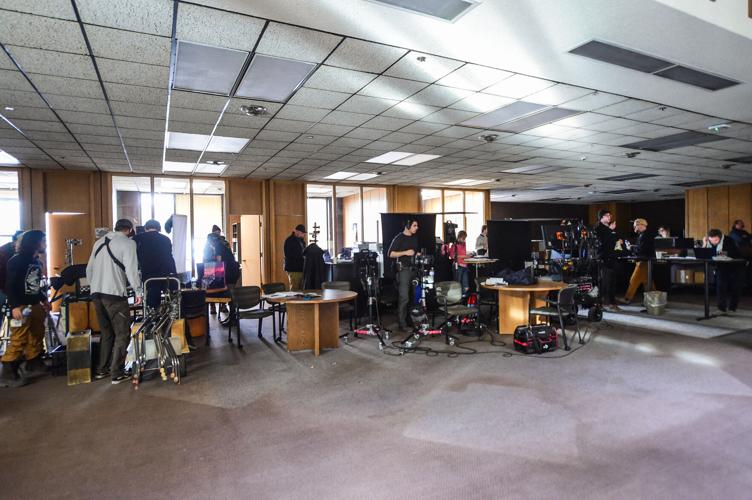 Set designers remove fake blood from the wall of an office at the Billings Gazette. 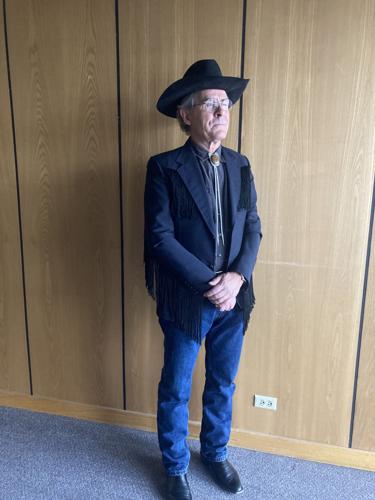 Chris Jorgensen dressed as a western wear business boss waits to be called to the set at the Billings Gazette. 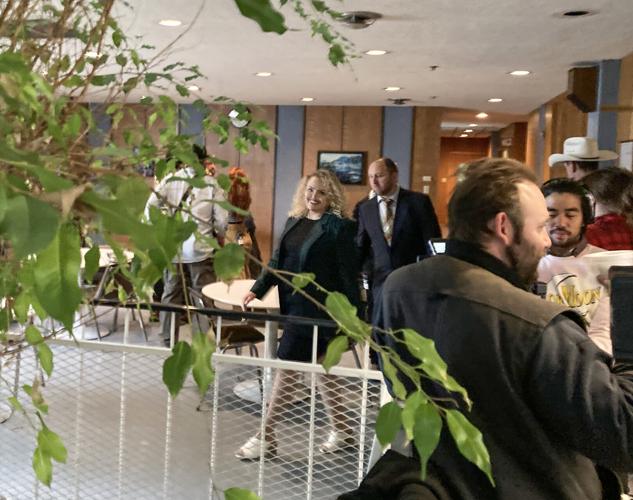 Billings Gazette photographer Amy Lynn Nelson was cast as an extra in the role of Office Worker in the new Hollywood film.