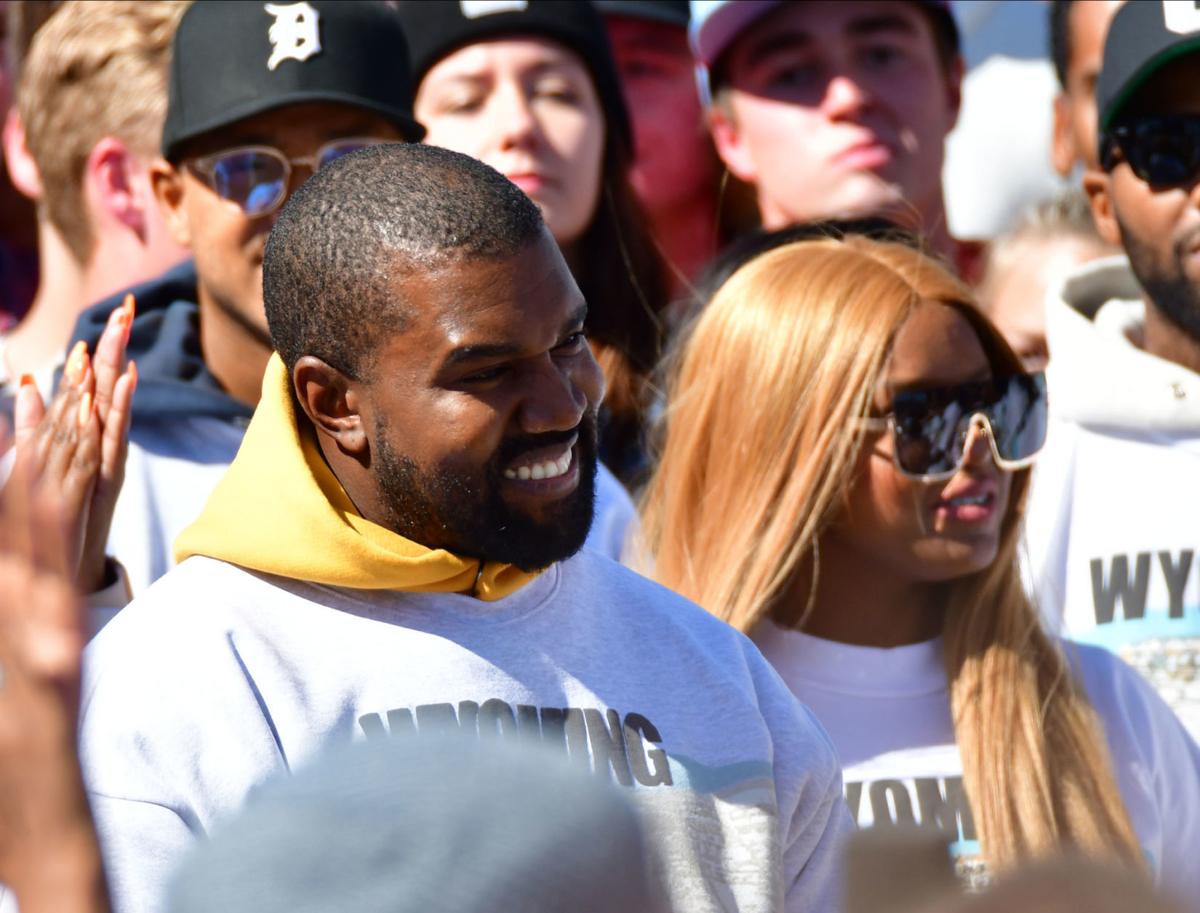 Kanye West and members of the choir for Sunday Service are seen participating in the event, which West brought to Cody, Wyoming on Sept. 22. 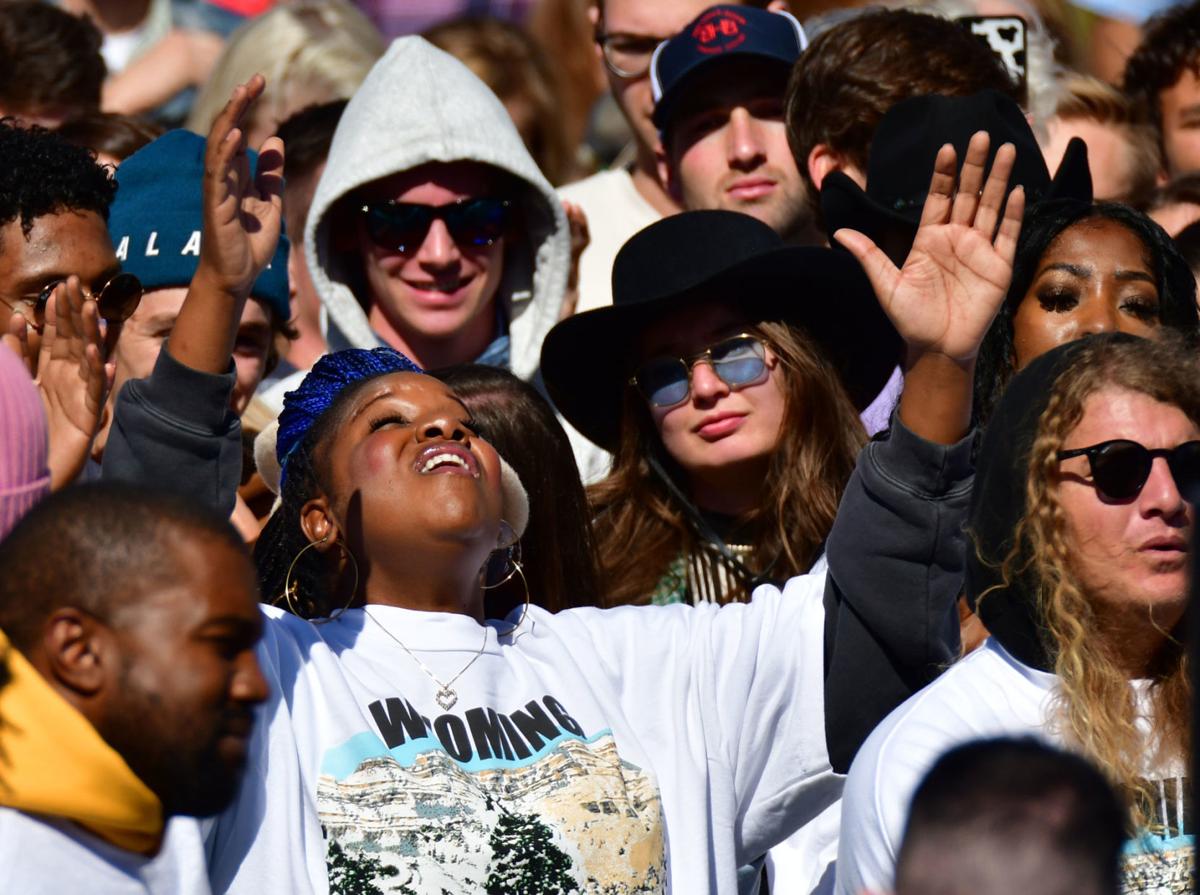 A member of the choir for Kanye West's Sunday Service sings during a worship service held in Cody, Wyoming on Sunday.

CASPER — Kanye West made headlines in 2019 for his ventures in Wyoming, which included buying property and moving his Adidas Yeezy clothing and shoe company headquarters to Cody, as well as recording, hosting his "Sunday Service" and creating music videos.

After the rapper announced in November he’d moved headquarters of his multibillion-dollar business to Cody, he and partners began preparations for a manufacturing facility — a “sample/prototype lab” — at the former Cody Laboratories warehouse. Meanwhile, Adidas started advertising for jobs based in Cody.

West also has talked about plans to farm hemp, cotton and wheat in Cody as well as to move all his manufacturing to South and North America, including his Cody property, within two years. West consulted with the mayor of Cody about locations for the “Sunday Service” he held in September, and the two also talked about topics including the tourism-driven economy and local interest in diversifying jobs.

A crowd of about 3,800 attended West’s “Sunday Service” worship service outside The Buffalo Bill Center of the West in Cody that featured a large choir.

Concerns that state regulations to protect sage grouse may apply to West’s project have slowed his plans to build a large “meditation center” on his Cody-area ranch. Wyoming wildlife officials also expressed concern about risk of animals falling into a hole being used in the construction and birds nesting in the structure. Local officials previously had denied a permit for the structure after West's “last-minute change to include residential space.” In addition to the change, the Park County Planning and Zoning Commission objected to "West already having done considerable work at the site" and told West's representatives to stop.

West has worked on or recorded his last two solo albums in Wyoming, including the new gospel album “Jesus Is King," as well as his "Kids See Ghosts" collaboration with Kid Cudi. West in 2018 threw a listening party near Jackson Hole for his "Ye" album attended by celebrities including Chris Rock, who introduced the album.

West recorded the album in Jackson. West's wife, Kim Kardashian West, posted on Twitter that he took the photo on the album cover on his way to the celebration. Other artists have flown in to Wyoming to collaborate with West on music projects.

West's latest two music videos feature footage of West and his family on his land in Wyoming, including one for “Follow God” from his latest album, which shows West and his father walking and driving ATVs. The “Closed on Sunday” video released later in November includes his wife and their four children on his Wyoming ranch, along with scenes of his "Sunday Service" choir and armored vehicles.

Some photography for West’s “Jesus is King” IMAX documentary film connected to the album was shot at his Cody area ranch as well.

From Weird Al to U.S. poet laureate: Local arts and entertainment had a big year in 2019

The Park County (Wyoming) Planning and Zoning Commission made the decision Tuesday after the rapper changed his plans for the structure near Cody.

Nathan Bender, author of "The Art of the English Trade Gun in North America" will speak on Feb. 24 to the Pahaska Corral of Westerners.

Nelly to play Casper as headliner of 4/2020 Spring Fest

Chingy, Twista, Do or Die and Sloan Bone of Bone Thugs-n-Harmony will also perform.

Half of the money raised by tickets and sponsorships will go to St. Jude's Children's Research Hospital, and the other will go to the cancer center in Cody.

Kanye West plans to use a former drug-manufacturing warehouse in Wyoming to create his Yeezy brand clothing and shoes.

Official: Kanye signature work in Wyoming too close to polls

Kanye West's campaign ran into trouble with the law Tuesday on his first day of trying to get on the presidential ballot in his adopted home state of Wyoming.

According to the Wyoming Highway Patrol, Star hit some slush on the road around mile marker 3.5 just after 8:30 a.m. Friday, veered off the roadway and overturned his Rolls Royce.

Kanye West and members of the choir for Sunday Service are seen participating in the event, which West brought to Cody, Wyoming on Sept. 22.

A member of the choir for Kanye West's Sunday Service sings during a worship service held in Cody, Wyoming on Sunday.