Bryan Raymond tested positive for the coronavirus in December 2020, and walked out of a Denver hospital with a newly transplanted pair of lungs in March 2021.

Raymond, 37, of Malta, woke up with a high fever and shortness of breath on Nov. 29. Because he knew the telltale signs of COVID-19, he received a test the next day and was told he was positive on Dec. 1.

He would soon become the first COVID-19 patient to receive a double lung transplant in Colorado. He's believed to be the first in the Rocky Mountain region.

But the challenges leading up to the surgery weren't easy to overcome, Raymond and his wife, Trinity, said in an interview with The Gazette on Thursday.

On Dec. 9 in Phillips County Hospital, Raymond's doctors discovered his oxygen saturation levels were as low as the 70s. Normal oxygen levels should be 90 or above.

He was quickly flown to Billings Clinic, about 200 miles away from his hometown.

"(The nurse practitioner) made the phone call for the flight crew and was like, 'We need to get you to Billings now,'" Raymond said.

On Dec. 17, Raymond was intubated and then placed on an ECMO, or extracorporeal membrane oxygenation, machine. The machine is like an artificial lung, using a cannula that is inserted into a major vein in the patient. The blood is oxygenated through the machine and is returned to the body while the lungs are resting, said Billings Clinic nurse and ECMO specialist Erika Dell.

Billings Clinic can typically care for only one patient on the ECMO machine at a time, since it requires a certain number of workers who are specially trained to use the equipment, said Dr. Fernando Caceres, Billings Clinic's ECMO program director who cared for Raymond.

Raymond was on the ECMO for nearly three months. About 22 days of that were spent at Billings Clinic. As Raymond's health worsened, Caceres began making calls to find a hospital that had the resources to either get Raymond off the ECMO or do a double lung transplant.

Many hospitals at the time weren't doing transplants because of the pandemic, Caceres said, and many were overwhelmed with coronavirus patients.

Finally, UCHealth University of Colorado Hospital took on the challenge and he was flown to Denver in early January. The hospital has more ECMO resources and performs heart, liver, kidney, pancreas and lung transplants, said Dr. Muhammad Aftab, a UCHealth cardiac and thoracic surgeon who cared for Raymond.

Raymond was kept sedated for most of his stay at UCHealth, Trinity Raymond said, since he would begin coughing to the point that it would interfere with the ECMO machine.

It became clearer that Raymond would need to get a transplant. To be placed on the United Network for Organ Sharing waiting list for a lung transplant, Raymond needed to not only test negative for COVID-19, but also get strong enough through physical therapy and be free from any other infection or health-related issues.

Before getting sick, Raymond weighed 245 pounds. After being bedridden for weeks, he weighed 175 pounds.

"By that time, he had lost so much muscle mass it required the physical therapist to completely support him to sit up and they would even have to hold his head up," Trinity Raymond said. "And at the same time, he's still testing positive for COVID."

Finally after using a specialized test that detected if Raymond was actively contagious, he received a negative result.

He continued physical therapy that required 10 to 12 people to help him walk on the ECMO machine, he said. He was listed as high priority for a transplant on Feb. 26. The 8-hour surgery took place March 6.

"I was nervous because I had been bedridden for so long, but Trinity and the physical therapist were there to push to make sure that I wasn't just going to give up and not do it," Raymond said.

After surgery, he experienced bleeding and was taken to the operating room again. The bleeding subsided, and doctors began waking Raymond up. After a few days, they discovered that his oxygen levels improved and his lungs were expanding when he breathed.

He was taken off the ECMO machine five days later on March 11.

"We're just thankful that there are people out there who are donors," Raymond said. "Not only organ donors, but blood donors, plasma donors — We can't thank the people enough that donate."

Raymond was discharged from UCHealth on April 12 and will live in recovery housing in Denver for another three months.

The Raymonds' four children, Ryder, 15; Renzey, 11; Raegyn, 5; and Rivyer, 3, still live in Malta and haven't seen their father since he fell ill.

He will have to visit UCHealth once a month for a year and will have to adopt lifestyle changes. He'll have to change his diet, continue physical therapy, and take it easy when it comes to daily tasks, like raking leaves, gardening and helping his father-in-law on his ranch.

At night, Raymond uses about a liter of oxygen while he sleeps, and because of his new lungs and the immunosuppressant medication, he'll have to wear a mask in public for the rest of his life.

"He was very determined to get better," Aftab said. "His determination, his grit, his desire to live was very strong."

Before getting COVID-19, Raymond worked for Phillips County as a road maintainer, operating snow plows, excavators and other machinery. In his free time, he was a basketball official from September to March. However, he won't be able to go back to that lifestyle.

Trinity is an elementary school teacher in Malta and has been on leave from her job since her husband became sick.

Residents of Malta have helped with fundraising, and a gofundme account has raised over $4,700.

To lower the risk of contracting the coronavirus again, Trinity Raymond received her vaccine in Montana when she visited their children for Easter. Bryan Raymond plans to get his shot a few months from now.

Right now, Raymond is focusing on feeling and getting better.

"We just have to figure out our new normal," Trinity Raymond said.

Billings Clinic is opening its new permanent viral triage unit Wednesday, where patients can get tested and evaluated for COVID-19 and other r…

Nursing students have been volunteering at Yellowstone County's COVID-19 vaccination clinics, including Cedar Hall at MetraPark and the Shrine Auditorium.

Montana reported 183 new cases of COVID-19 on Saturday, and four more of its residents have died due to the virus.

When Christopher Smith underwent spine surgery on April 7, he not only got the expertise of a surgeon, but also the accuracy of a robot. 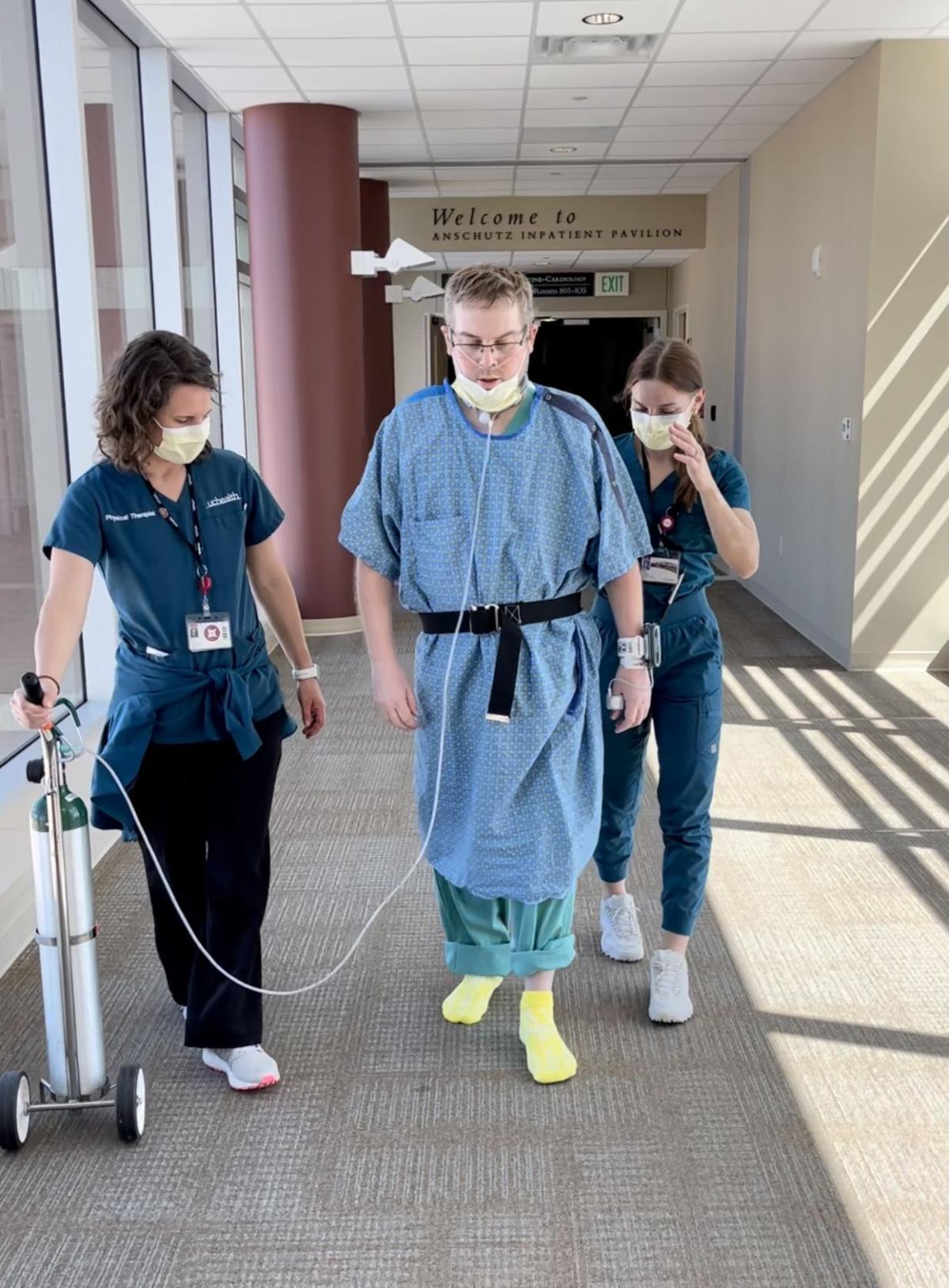 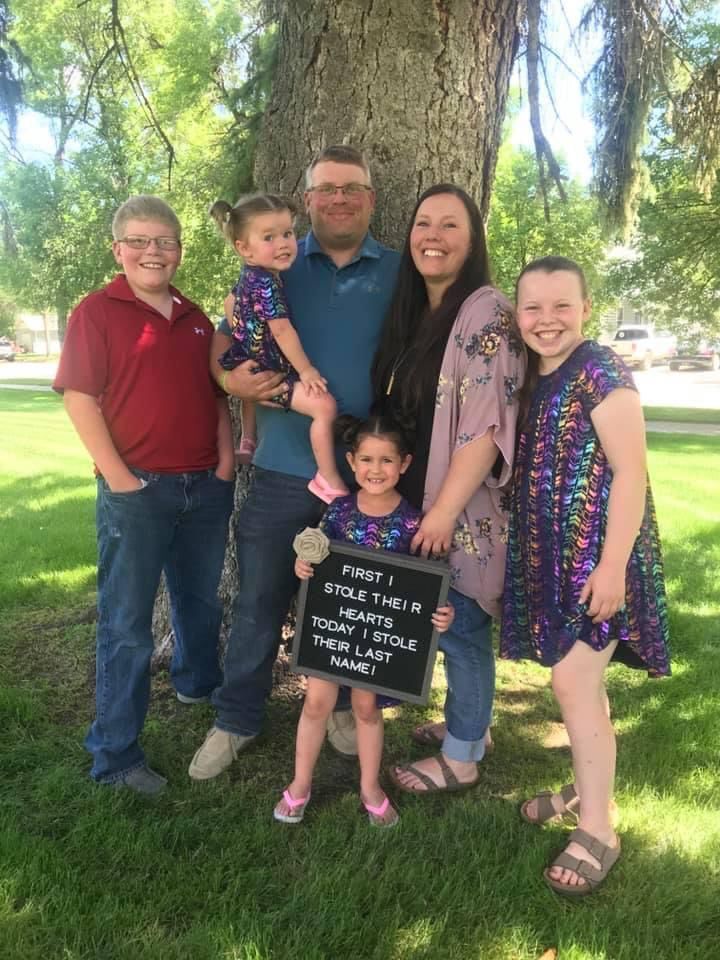 Bryan Raymond was the first COVID-19 patient to receive a double lung transplant in Colorado. Raymond and his wife, Trinity Raymond stand with their children, Ryder, Rivyer, Raegyn and Renzey in Malta. 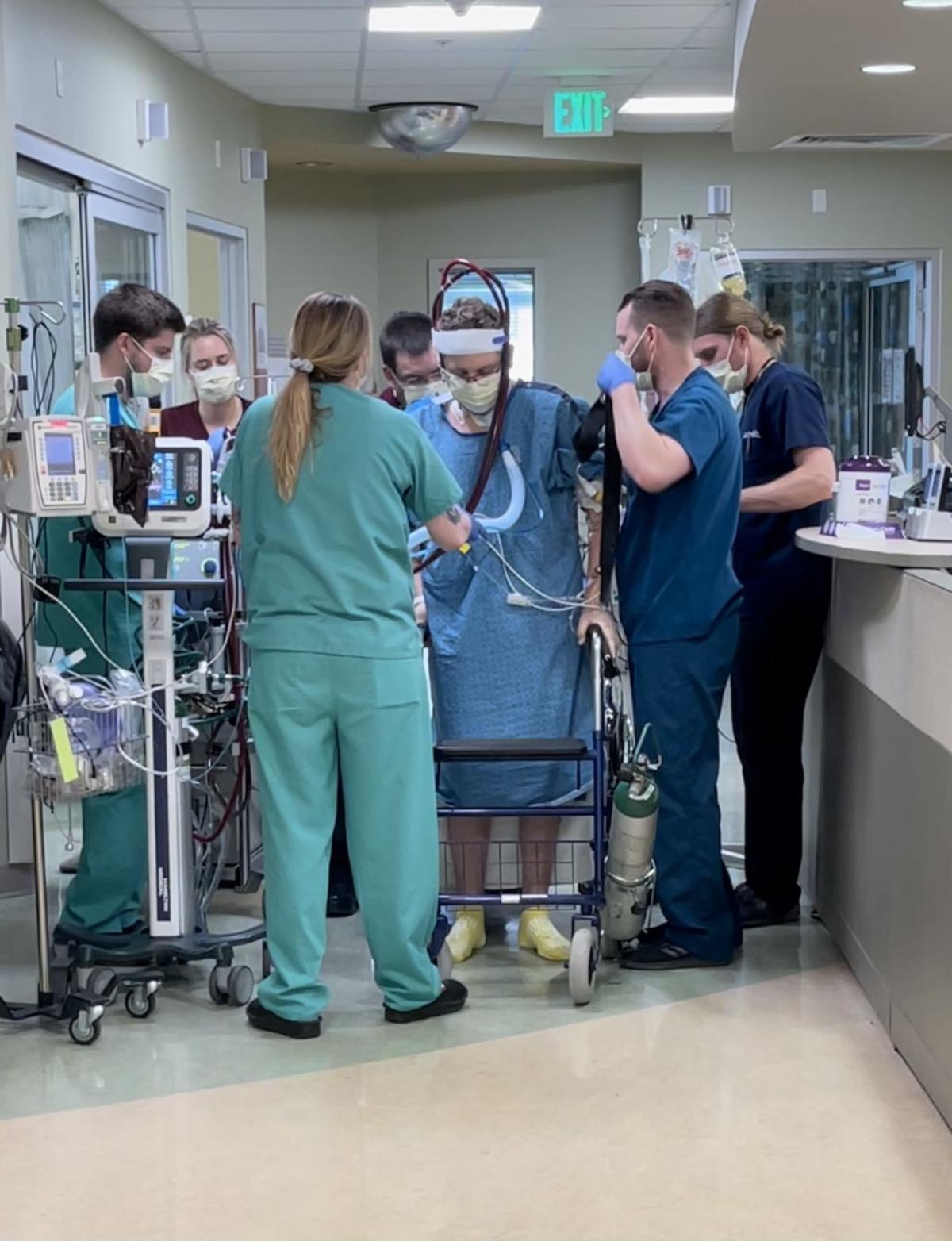 Bryan Raymond walks while attached to an extracorporeal membrane oxygenation, or ECMO, machine at UCHealth University of Colorado Hospital on March 3, 2021.