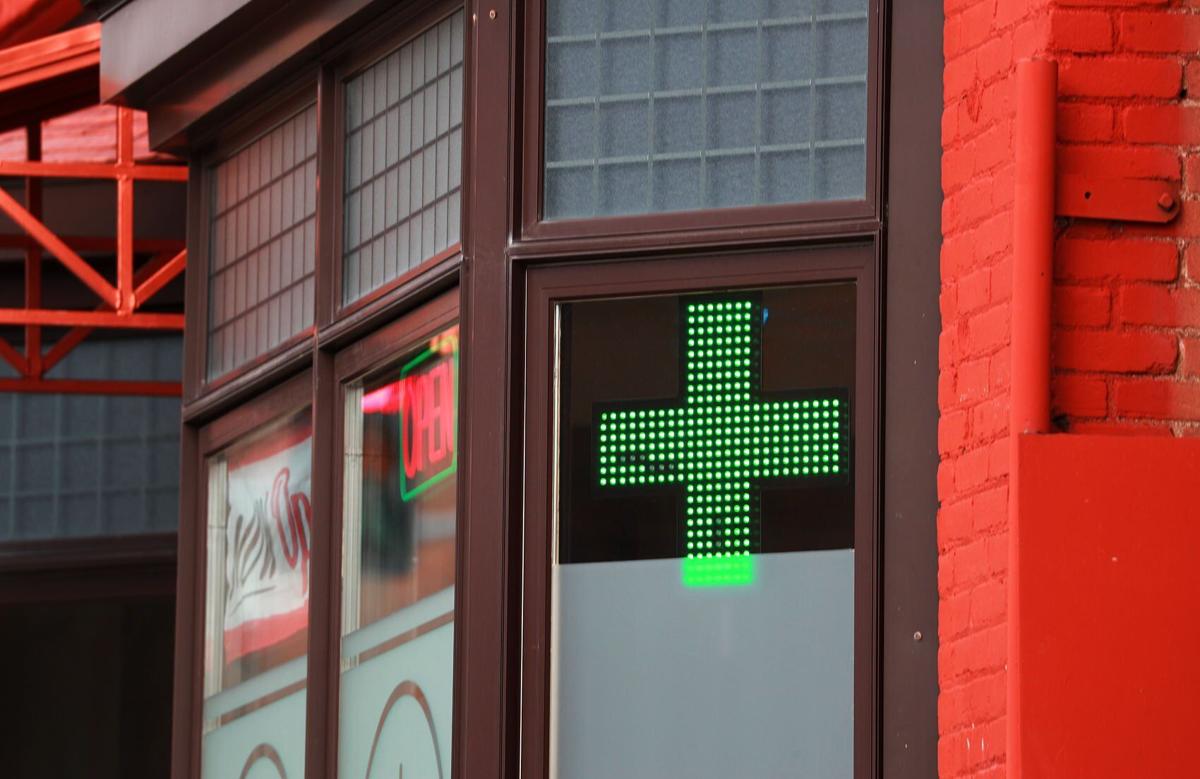 A green cross flashes in the store front of a cannibals dispensary located on Montana Street in Uptown Butte. The green cross is a symbol for medical marijuana. 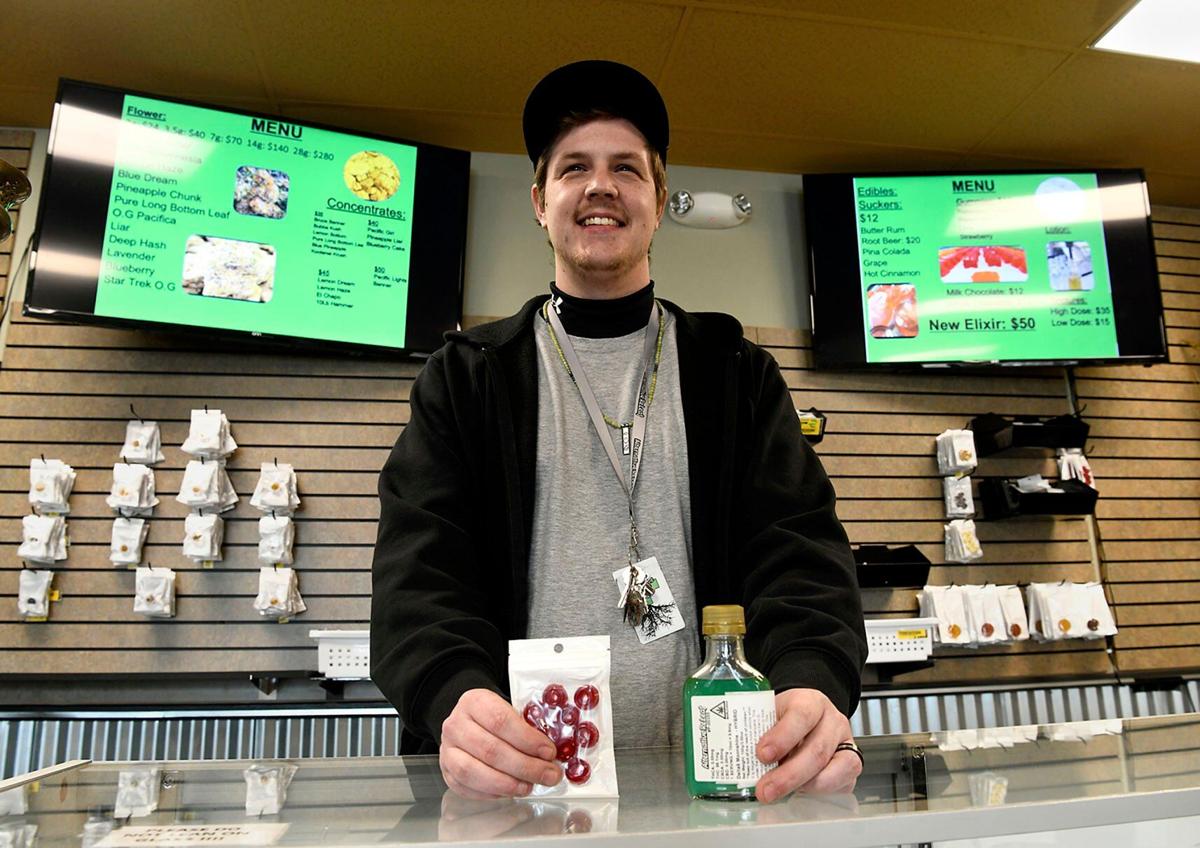 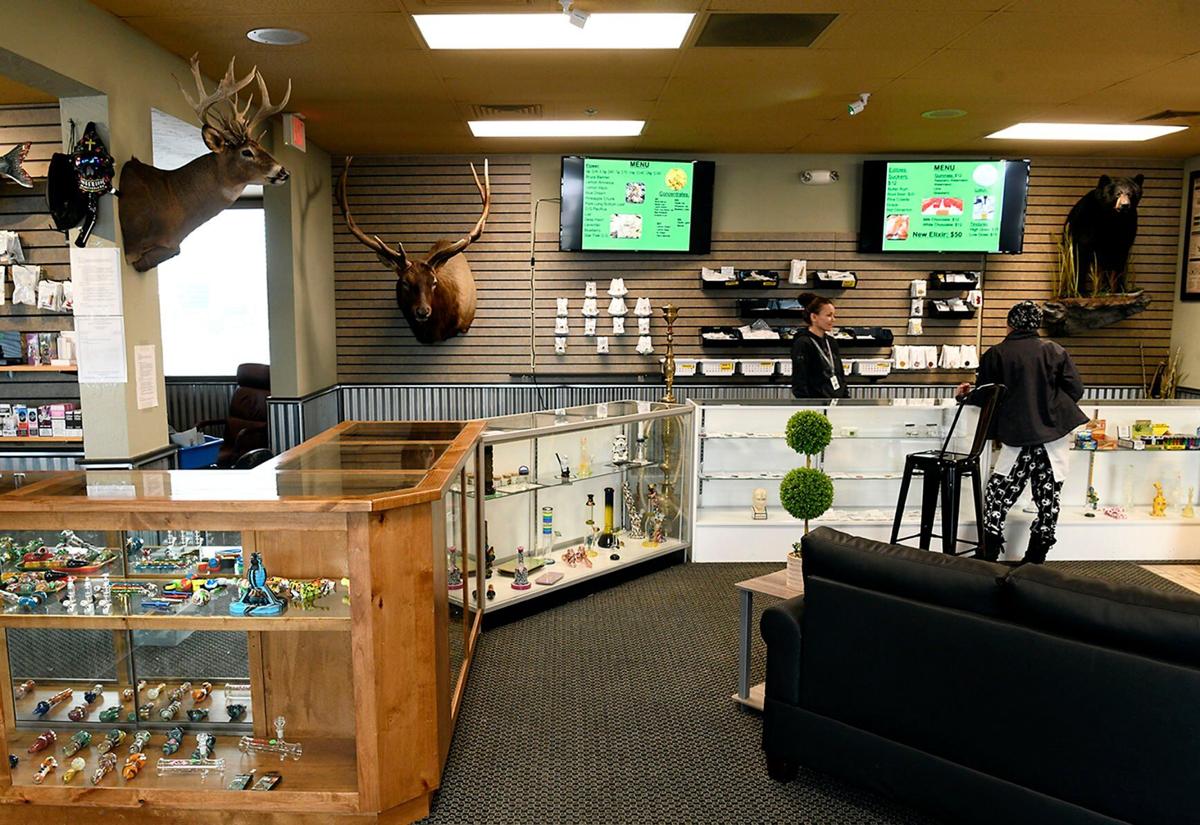 Alternative ReLeaf's location in Polson is roomy and features wildlife mounts around the store. Manager Zax Martin said the staff takes care of medical customers first when they visit the dispensary.

More than a year after voters approved legalizing marijuana for recreational use in Montana, anyone older than 21 can now walk into a dispensary and buy cannabis. That has medical marijuana user Joylynn Mane Wright worried.

Wright lives in Prairie County, the state’s fifth-least-populated county, with nearly 1,100 people. She already drives about 35 minutes to get to the marijuana dispensary nearest her home, which is 2½ hours northeast of Billings. And now she wonders how much more difficult it will be to get the cannabis she uses to relieve the chronic pain she developed after a 2017 spinal surgery.

“I’m really worried about supplies and what it’s going to cost,” she said.

For Wright and the approximately 55,000 other Montanans who hold medical marijuana cards and use cannabis for cancer, glaucoma, Crohn’s disease, central nervous system disorders and other ailments, the question is how will recreational marijuana affect their ability to access their medicine.

Pepper Petersen president and CEO of the Montana Cannabis Guild and a medical marijuana provider in Helena, said he’s been telling his patients to stock up because he thinks the state’s dispensaries will run out of pot in the short term.

“We are going to have cannabis shortages. Access will be a problem until supply can catch up with demand,” Petersen said. “How can we produce enough product for thousands of new users in January? The answer is we can’t.”

In Wright’s case, stocking up isn’t an option because of her fixed income, she said. She wonders how high the price of a pre-rolled joint, which now costs nearly $8, will rise and whether she’ll have to drive even farther to get her medicine.

Jared Moffat, a campaign manager for the Marijuana Policy Project, said a state’s market usually takes six to 12 months to stabilize after recreational cannabis becomes legal. One reason marijuana markets are unstable is that possessing and distributing the drug remain illegal under federal law, so moving products across state lines is not an option for dealing with a shortage. Everything that is sold in a state must be grown in that state.

Adding to the potential supply-chain problem is that Montana has restricted who can sell cannabis, at least initially. The legislation that set up the framework for Montana’s recreational marijuana market gave existing dispensaries an 18-month head start on new producers, meaning newly licensed sellers can’t get into the market until July 2023.

That leaves medical marijuana customers to compete with recreational users for a limited supply of cannabis.

About 80 dispensaries — just 18% of Montana’s 451 licensed dispensaries — plan to exclusively serve holders of medical marijuana cards, according to Czelsi Gómez, spokesperson for the Montana Department of Revenue, which oversees the state’s marijuana programs. The rest plan to cater to both recreational and medical users or to only recreational users.

Some states that have legalized recreational cannabis — including New Jersey and Illinois — have required dispensaries to maintain enough stock to ensure that medical users can get what they need.

Montana has not instituted such a rule. But Gomez said the 80 dispensaries that will serve only medical marijuana users will protect patients. “We believe the medical-only establishments are the safeguard for ensuring medical marijuana is available to registered cardholders,” Gomez said.

Some dispensary owners said they will reserve some of their supplies to ensure medical customers don’t run out. But others said they don’t plan on holding back, arguing that would be bad for business.

Barbie Turner, a co-owner of Alternative ReLeaf, a dispensary with locations in Polson and Libby, said she is worried about where medical users will get their cannabis. She said that if serving medical customers requires her to stop selling cannabis to recreational users, she will.

How big the recreational marijuana market will be is unclear. A University of Montana study cited survey results from 2017 and 2018 that found about 14% of Montana adults said they used cannabis in the previous month, compared with 9% of adults nationally.

Petersen and others said more people might become recreational users once cannabis products that can be smoked or eaten become easier to buy.

Turner said that she and her employees have been working for months to make sure they have enough marijuana but that she’s still worried about the supply. There are limits, both legally and financially, on how much a provider can grow, she said.

Shops will get some help, she said, when the state’s wholesale market opens in January, meaning that dispensaries will be able to sell to one another in bulk.

Although many dispensaries — especially in college towns such as Missoula and Bozeman — are bracing for shortages this month, Erin Bolster said she thinks the real test of marijuana supplies will come in the summer, when millions of tourists visit Yellowstone and Glacier national parks.

Bolster owns Tamarack Cannabis in the Flathead Valley, a popular tourist destination not far from Glacier National Park. Last summer, long before dispensaries could sell recreational cannabis, Bolster said, she would get one or two walk-ins and two or three calls a day from tourists who had heard Montana had legalized adult-use marijuana and wanted to see if they could buy.

Come summer, she thinks, the number of customers will skyrocket. That could mean even more competition for Montana’s medical marijuana there and in other popular destinations.

“We’ve been able to expand production,” Bolster said. “But the question is ‘Did we expand enough?’”

The Montana Grain Growers said it was confident Montana’s ag economy wouldn’t be negatively affected by the BNSF takeover of Montana Rail Link.

A Billings transgender woman has been awarded compensation by the Montana Human Rights Commission after Yellowstone County’s health insurance policy denied her all gender-affirming healthcare.

A woman was killed and a toddler hospitalized in a single vehicle crash west of Hardin on Tuesday.

Contract talks between the biggest freight railroads and unions that represent 105,000 employees are headed to mediation this week after the unions declared an impasse after two years of negotiations.

The Northern Cheyenne president has been accused of neglect and failing in the duties of her office, and will face a hearing with the tribal c…

Guns or marijuana, but not both

According to the federal Gun Control Act of 1968, marijuana customers — legal and otherwise — are prohibited from possessing firearms.

A truck driver from Texas said to have limited experience driving on snow and ice and two passengers in her Peterbilt 18-wheeler escaped serious injury early Tuesday when the eastbound truck jackknifed on Interstate 90 near Deer Lodge.

A green cross flashes in the store front of a cannibals dispensary located on Montana Street in Uptown Butte. The green cross is a symbol for medical marijuana.

Alternative ReLeaf's location in Polson is roomy and features wildlife mounts around the store. Manager Zax Martin said the staff takes care of medical customers first when they visit the dispensary.