The BOLO, which stands for "be on the lookout," was issued just after 4 p.m. on Wednesday by the FBI and asked for the public's help in finding Selena Shelley Faye Not Afraid.

It's the first official alert since a Missing and Endangered Persons Advisory was issued for Selena on New Year's Day, hours after she was last seen.

An amber alert has not been issued for the girl. Amber alerts, distributed to local media and as text messages to anyone in the region with a mobile phone, are used specifically for cases involving minors in which an abduction is believed to have occurred.

Selena was last seen New Year's Day around 2 p.m. at the eastbound rest area at mile marker 474 off of Interstate 90 between Billings and Hardin. She reportedly walked away from the rest stop after the people who were giving her a ride to Hardin drove off and left her and another woman at the rest area.

"Selena's direction of travel is unknown, but (she) may be in Big Horn, Yellowstone, Rosebud and Treasure counties," according to the FBI's alert. 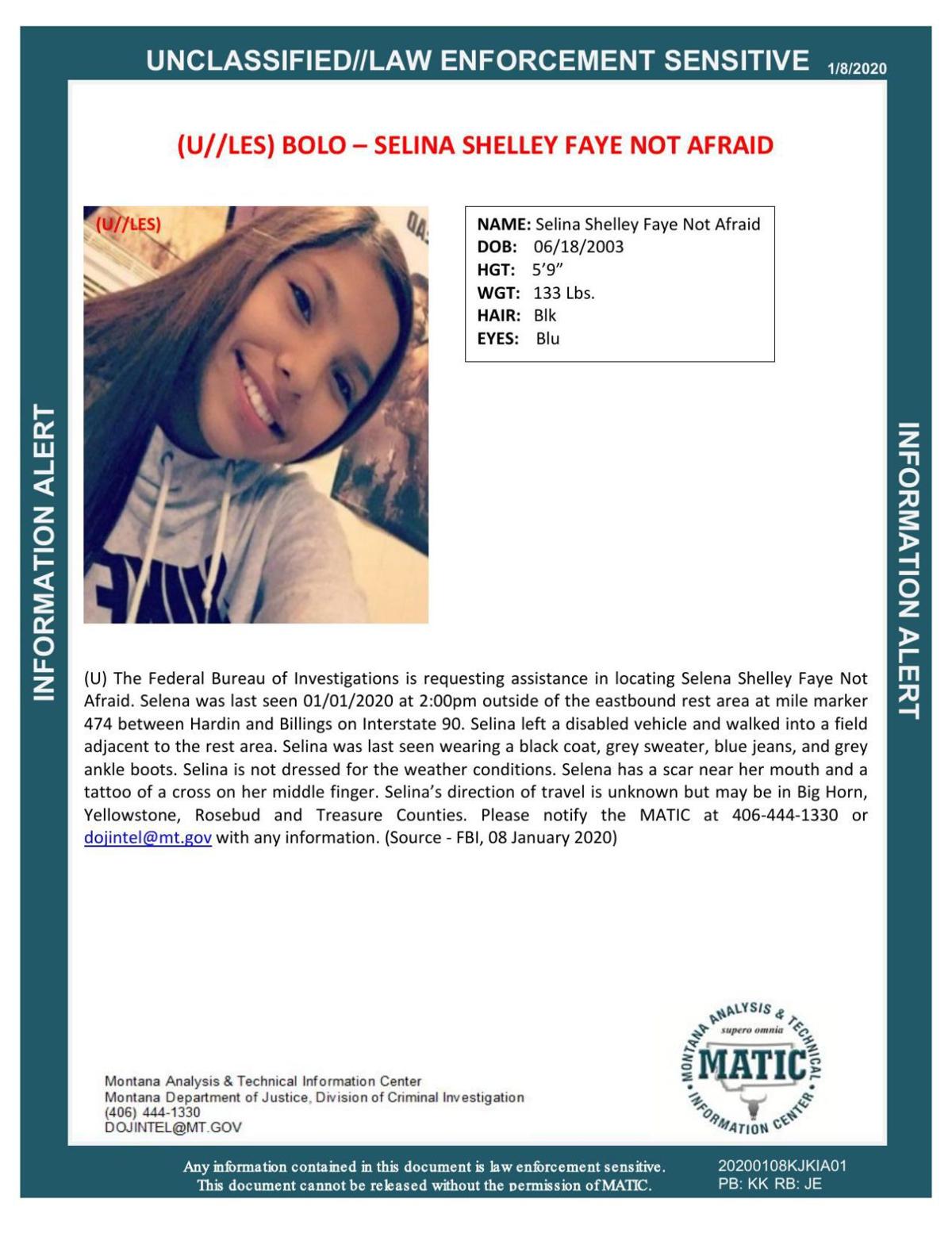 Selena was last seen wearing a black coat, grey sweater, blue jeans and grey ankle boots. She was not dressed for weather conditions. She's 5-foot-9-inches tall and weighs about 130 pounds.

She also has a scar near her mouth and a tattoo of a cross on her middle finger.

Law enforcement officers are looking for a green Subaru, possibly a Forester, with Wyoming plates that was seen at the closed rest stop Wednesday.

The FBI has been involved since the start of the search, according to spokesperson Sandra Barker. But Wednesday marked the first involvement of a special "child abduction" team. Local law enforcement asked for the team's help Tuesday.

The CARD team is a group of specialized investigators working from the sight of an abduction, often with behavioral analysis experts and technical specialists, according to the FBI.

The joint investigation into the "suspicious" disappearance of the teen included the FBI, BIA and numerous local and state law enforcement agencies, Big Hair said.

Neither Big Hair nor Undersheriff Eric Winburn would say what new resources the FBI had provided. Windburn said the FBI team would help organize and regroup the investigation but declined to comment on what the next moves in the investigation would be.

"We're doing everything we can to find her," Winburn said.

Searches at the rest area that began hours after she went missing have continued daily. Wednesday both volunteers and law enforcement searched areas south and southeast of the rest stop, Big Hair said. Searches have been conducted on foot, horseback and ATVs; and with helicopters, thermal drones and K-9 units.

Anyone with information on Selena is asked to call the Big Horn County Sheriff's Office tip line at 406-665-9800, or the Montana Analysis and Technical Information Center at 406-444-1330, or email dojintel@mt.gov.

The Billings Gazette has continued to examine one of the most urgent issues in Montana and our region — missing and murdered indigenous women and girls.

In Montana, Native Americans are just 6.7% of the total population, but make up 26% of missing persons cases.

The problem has persisted for generations, and many of the cases remain unsolved. The causes are numerous and complex, and any lasting solutions have been elusive.

Several bills aiming to combat the crisis of missing Native Americans in Montana are now on the books, after members of the Montana Legislatur…

Maria Campbell believes that honestly examining personal and community histories is essential to healing wounds of trauma and injustice, an en…

More in Complete coverage: The search for Selena Not Afraid (7 of 11)