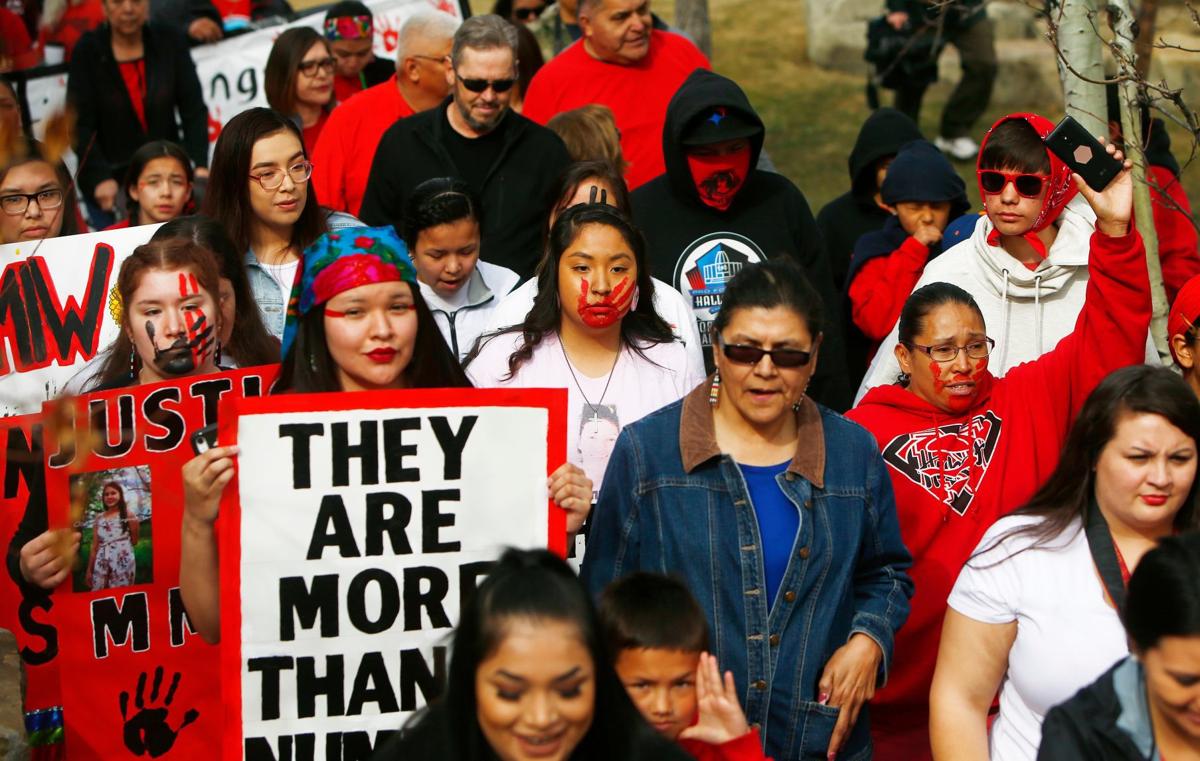 Marchers walk through Montana State University Billings campus during the Missing and Murdered Indigenous Women’s March in Billings on Friday. 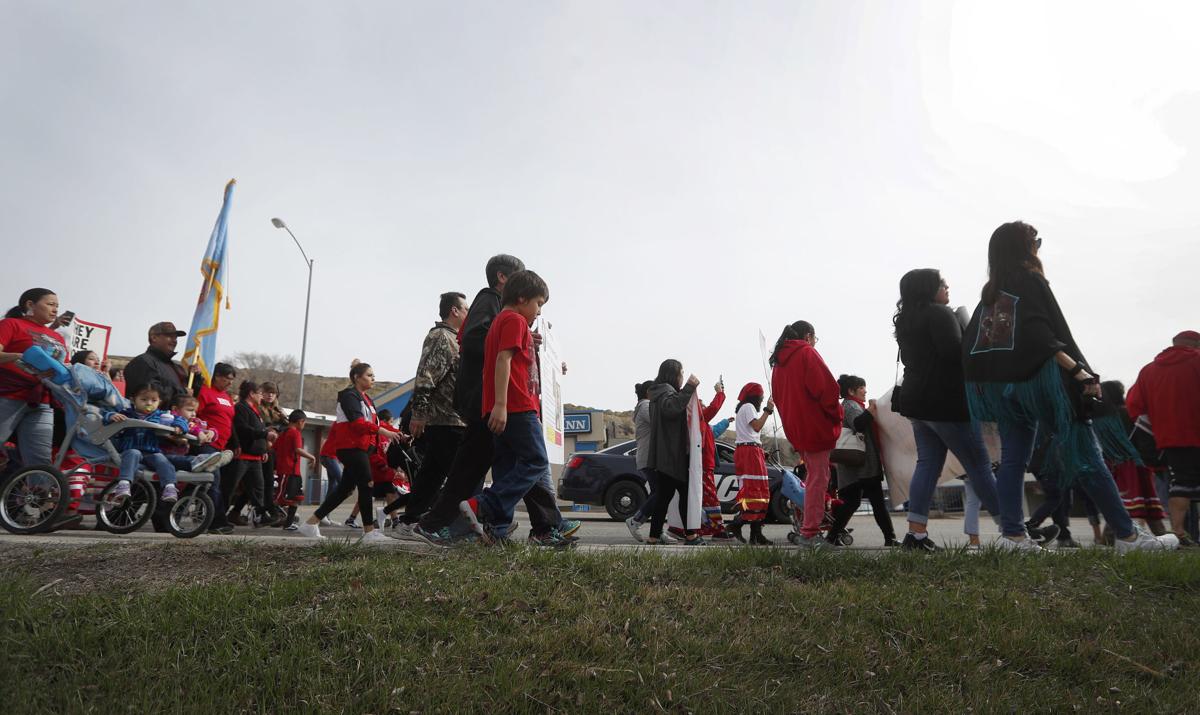 Marchers walk along North 27th Street during the Missing and Murdered Indigenous Women’s March in Billings on Friday.

Kenneth Brien said he doesn’t typically attend public rallies and events, but Friday morning, he joined about 400 others who marched through downtown Billings to help push the crisis of missing and murdered Native Americans to the fore.

For Brien, a Crow tribal member and Vietnam veteran, the event brought back difficult memories of the frigid night, shortly before Thanksgiving in 1977 when his sister Beverly “DeeDee” Brien didn’t come home. The 16-year-old girl was later found naked, beaten and frozen to death in the snow, about 3 miles from the Hardin movie theater where her friends last saw her.

In Montana, Native Americans are just 6.7 percent of the total population, but make up 26 percent of missing persons cases. The problem has persisted for generations and the causes are numerous and complex. 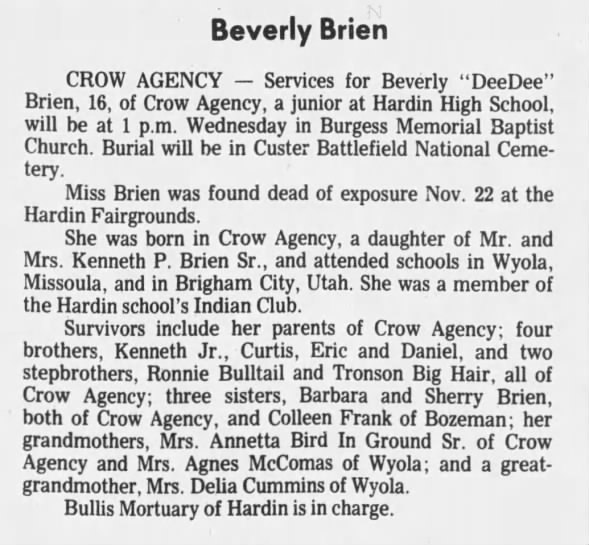 Her obituary, published a week later in The Billings Gazette, stated her cause of death as exposure. But Brien and other members of her family believe she was abducted, assaulted and then kicked out of a car, after she went outside the theater to get her purse.

“For me, I don’t know how to describe this walk. It just brings back memories that I put in little corners, slammed the door shut like I did my military service, and locked the door,” Brien said, speaking shortly before the march began at the Native American Achievement Center on the Montana State University Billings campus. “Every Thanksgiving, it never goes away. The emotions that come out in you, it never goes away.”

The event was billed as the “MMIW March,” a reference to the movement to raise awareness of missing and murdered indigenous women. Native women and girls in Montana go missing and are victims of violence at rates far higher than the state’s overall population.

A half-dozen traditional singers and drummers helped lead the procession as it filed down the west sidewalk of North 27th Street. Most of the marchers wore red and many carried signs with pictures of their missing or murdered loved ones, as well as several of the growing movement’s slogans: “Say her name;” “No more stolen sisters;” “#NotInvisible.”

Organized by the Native American Achievement Center, the Native American Development Corporation and the Rocky Mountain Tribal Leaders Council, the march and subsequent speeches on the Yellowstone County Courthouse lawn attracted hundreds of Native and non-Native people from the region, many sharing personal stories similar to Brien’s.

Shawnae King’s sister, Shacaiah Harding, disappeared in Billings in July. Standing beside their mother at the end of the march, King asked the crowd to pray for Harding’s return, and to say her name in unison.

“There’s a lot of stigma behind my sister right now. She was an addict, I will admit that. And I don’t know if that’s what’s causing her case to not be so known,” she said. “Either way, she’s missing. And a lot of times I feel like she’s forgotten. I feel like her name isn’t out there enough."

Pausing at times as her voice wavered with emotion, Paula Castro of Lame Deer recalled the days following the December disappearance of her 14-year-old daughter, Henny Scott. The Northern Cheyenne girl was found dead by a volunteer search party two weeks after she was reported missing, near a house on the Northern Cheyenne Reservation.

“It didn’t even take three and a half hours to find my daughter,” said Castro, who has been critical of tribal and Bureau of Indian Affairs police who she said brushed aside her concerns. “What we need is more warriors to help with this process. Somebody who’s going to bridge the gap, someone there who’s going to take us seriously.

"… Where I’m at now, we’re not on the same page. I have no idea where my daughter’s investigation is going because nobody has contacted me, nobody has let me know anything.”

Like Castro, King and Brien, others in attendance criticized law enforcement’s response to their loved one’s cases. Federal legislation known as “Savanna’s Act,” which failed to clear Congress last year, has been reintroduced by North Dakota’s two senators, and would require federal agencies to develop protocols for dealing with missing-person reports on Indian reservations. It also aims to increase cooperation among law enforcement agencies with jurisdiction on or near reservations.

Among several Montana politicians at the rally was the state’s Republican Sen. Steve Daines, who said he would push his congressional colleagues to pass Savanna’s Act during this Congress. It previously sailed through the Senate unanimously before stalling out in the House.

Speaking after his remarks on the courthouse lawn, Daines added that he will seek increases in federal dollars for BIA and FBI law enforcement working in Indian Country. Like Montana’s other senator, Democrat Jon Tester, whose representative also provided remarks to the crowd, Daines sits on the Senate committees on Indian Affairs and Appropriations.

“The amount of effort expended on this crisis is woefully underfunded,” Daines said. “We do not have enough resources and law enforcement to address this crisis.”

Northern Cheyenne President Rynalea Whiteman Pena emceed the event, echoing others’ remarks when she repeated that the crisis extends to Native American men and boys, not just women.

A 14-year-old girl who was found dead two weeks after she was reported missing in December died from hypothermia, the state medical examiner's…

4 brothers plot how to watch 4 grandkids in 3 tourneys

Pardon the Brien brothers if they won’t know whether they’re coming or going this week during the state's six high school basketball tournaments.

A bill that would have created Hanna's Act, named after a murdered Native woman, looked poised to clear the state Senate on Friday but was delayed as part of an effort to save a Republican-sponsored bill offering a homegrown approach to addressing the issue of missing and murdered Native women.

Lawmakers and state agency leadership admitted Monday that legislation named after a murdered Native woman and meant to avoid the circumstances that led to her death in the future is toothless.

After an amendment restored the requirement that the Department of Justice create a missing persons specialist position and put back funding for the job, a Senate committee Tuesday passed Hanna's Act.

The report of death for Olivia Lone Bear is not a public record because it is part of an active investigation, North Dakota Attorney General Wayne Stenehjem wrote in an opinion issued Friday.

Why do so many Native American women get murdered or disappear? Congress is aiming to find out

In some places, Native American women are more than 10 times more likely than the rest of the population to be murdered.

'A bill of life and death': Legislature passes Hanna's Act

A bill to create a missing persons specialist within the Department of Justice to help facilitate timely searches when people disappear passed the Legislature on Tuesday and is heading to Gov. Steve Bullock, who is expected to sign it.

Darryl LaCounte has been appointed to the position of director of the Bureau of Indian Affairs in the U.S. Department of the Interior, according to an announcement made Monday by the Assistant Secretary of Indian Affairs Tara Mac Lean Sweeney.

For the past three weeks, artist Terri Porta has been using spray paint to transform a wall at Montana State University Billings into a piece …

Crow Tribal Chairman A.J. Not Afraid, speaking for the tribe, has endorsed the reelection of U.S. Sen Steve Daines.

Marchers walk through Montana State University Billings campus during the Missing and Murdered Indigenous Women’s March in Billings on Friday. 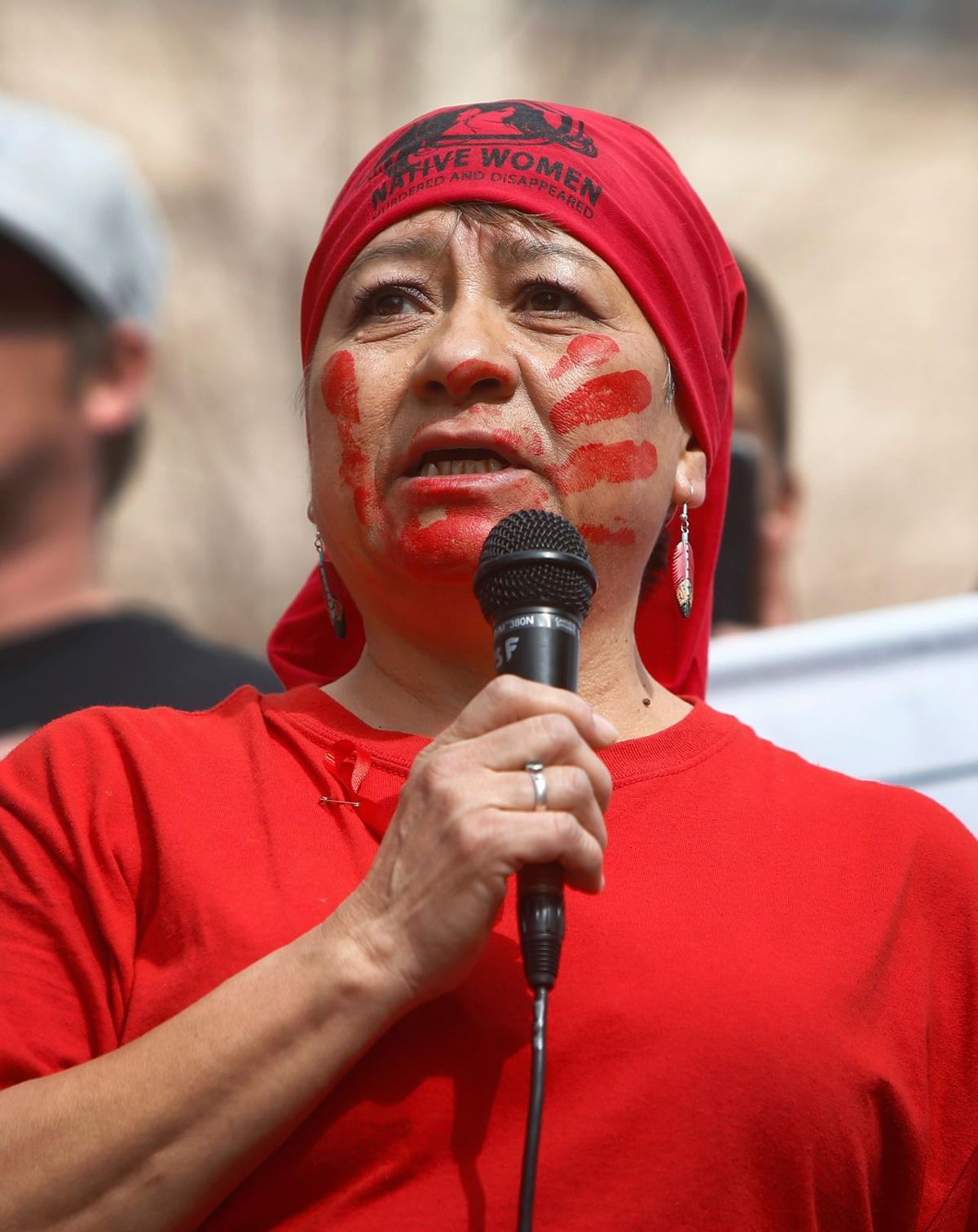 Rynalea Whiteman Pena, the president of the Northern Cheyenne Tribe, speaks during the program following the march on the lawn of the Yellowstone County Courthouse.

Marchers walk along North 27th Street during the Missing and Murdered Indigenous Women’s March in Billings on Friday. 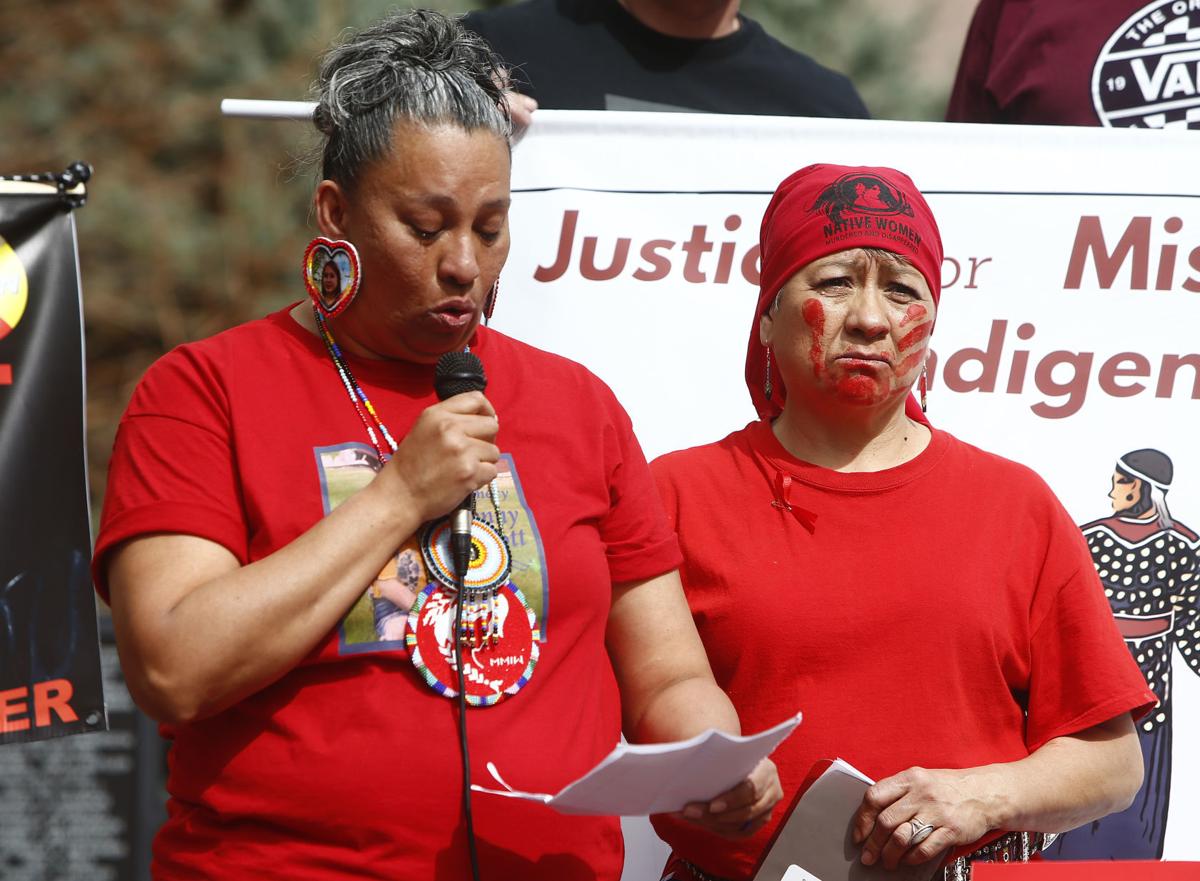 Paula Castro, left, mother of Henny Scott, speaks beside Rynalea Whiteman Pena, the president of the Northern Cheyenne Tribe, during the program following the Missing and Murdered Indigenous Women’s March on the lawn of the Yellowstone County Courthouse in Billings in April 2019. 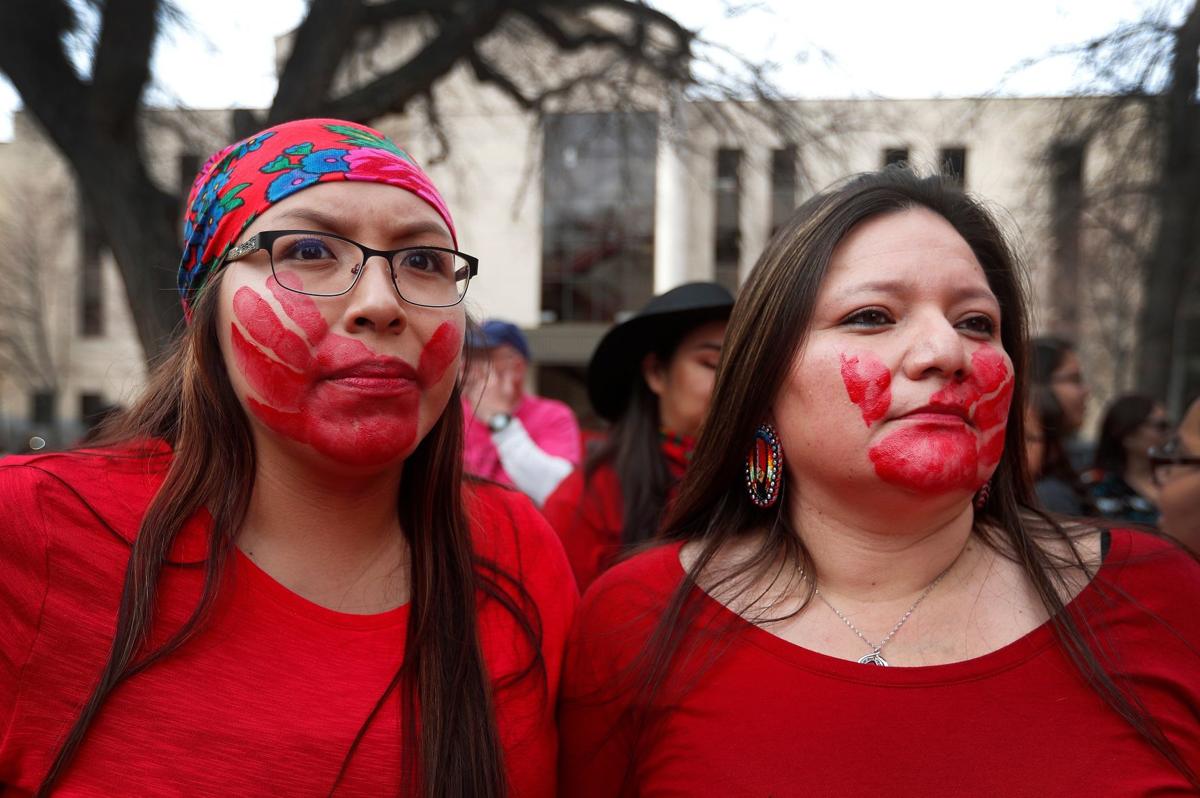 Emily Enick, left, and RoyAnn Enick, of the Crow Tribe, watch during the program following the Missing and Murdered Indigenous Women’s March on the lawn of the Yellowstone County Courthouse in Billings on Friday. 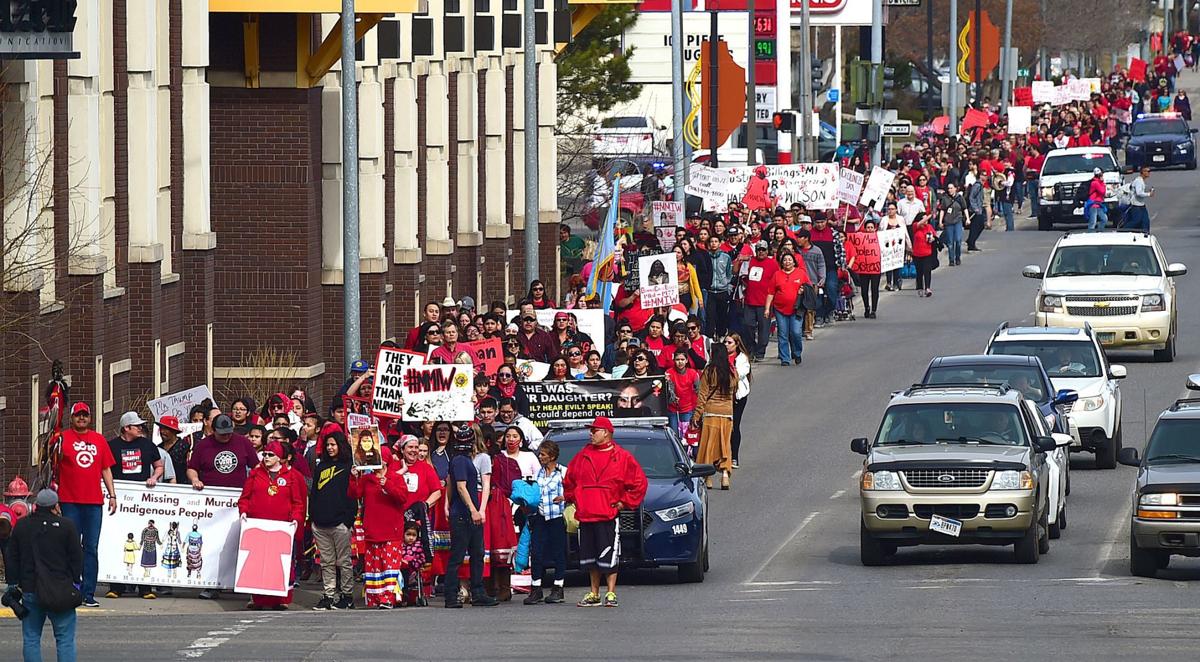 Hundreds attend Missing and Murdered Indigenous Women March in Billings on Friday. The march started at MSU Billings and ended with a rally on the lawn at the Yellowstone County Courthouse. 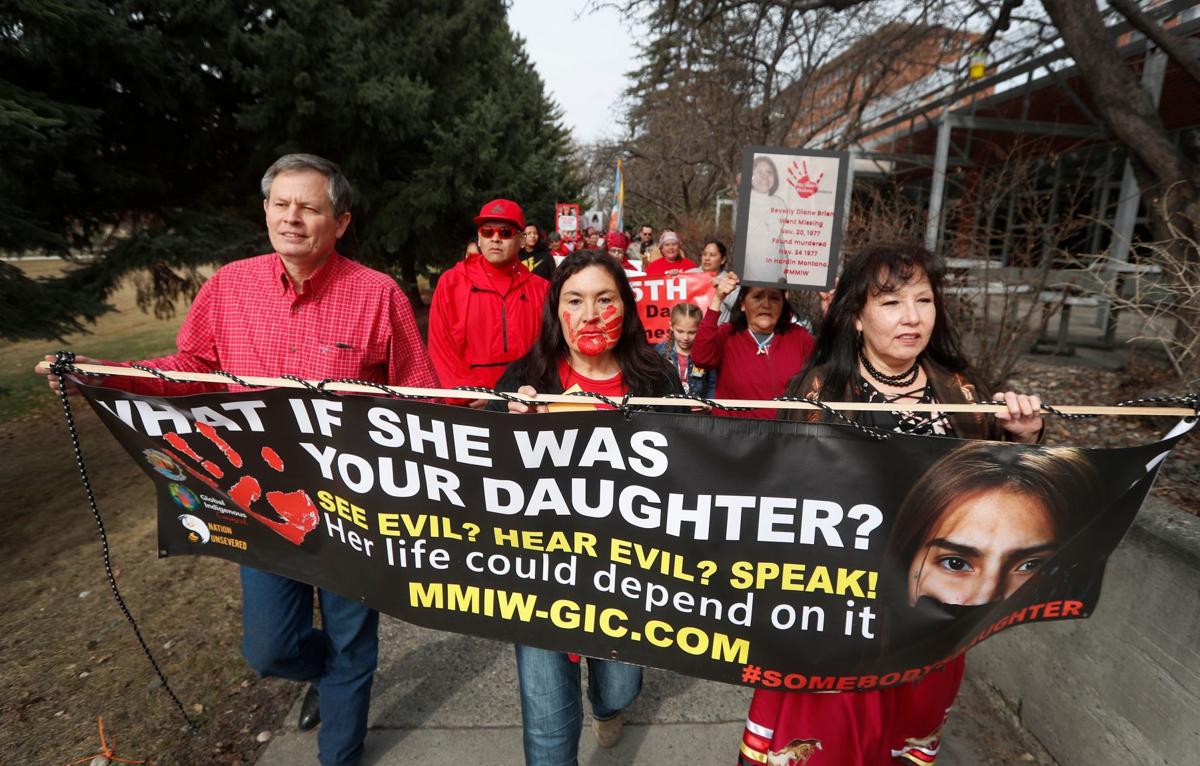 Sen. Steve Daines, left, carries a banner with fellow marchers through MSU Billings during the Missing and Murdered Indigenous Women’s March in Billings on Friday.