Responding to recent murders on the Northern Cheyenne Reservation, Montana's U.S. senators are asking the FBI to and Bureau of Indian Affairs to do more to investigate and communicate with victims’ families and local governments.

The Wednesday letters from Sens. Jon Tester and Steve Daines follow a tight-lipped FBI response to an apparent homicide in broad daylight that was recorded in a residential neighborhood near Lame Deer and posted to Facebook. A message circulated with the post read: “this was a couple hours ago. People are saying that they couldn’t get the cops to show up. Those guys ended up fighting and they killed him right there in broad daylight on the street in Lame Deer.”

The video was taken down after it was widely circulated.

The FBI declined to offer any details about the apparent murder or the victim, other than to say a murder was being investigated, when contacted by Lee Montana Newspapers on Tuesday.

Local Sheriff Allen Fulton, who is also the deputy coroner of Rosebud County, said he too was unable to get federal agents to respond.

Monday’s death was at least the second since June, in which Northern Cheyenne Tribal officials were angered by the response of the FBI and Bureau of Indian Affairs, the two law enforcement agencies charged with investigating felony crimes on reservations.

“I have heard from Northern Cheyenne Tribal leadership and multiple family members regarding these recent deaths,” Tester said in a letter to FBI Director Christopher Wray. “The loss of these individuals has rippled through the community, as has alarm at the growing number of cases. Tribal leadership and family members of the deceased have raised consistent concerns about the lack of communication from both the BIA and FBI.”

Chronically poor federal response to missing and murdered Indigenous people is at the core of the movement demanding justice for missing and murdered Indigenous women and people. In Montana those concerns came to a boil in late 2018 when a 14-year-old Northern Cheyenne girl, Henny Scott, went missing for more than a week before federal officials began treating the teen as a missing person. Volunteers formed a search party eventually found Henny's body in a residential backyard more than two weeks after she was last seen. After notifying the FBI, volunteers stood vigil over Henny's body until the FBI arrived the next day.

"Tragically, we lost the life of Cory Blackwolf yesterday. Cory was a young Northern Cheyenne man whose gruesome killing and kidnapping were displayed on a Facebook video for hours before eventually being taken down," Daines said in a letter to U.S. Attorney General William Barr. "These heinous acts and injustices cannot continue to happen and it is imperative that additional resources are promptly made available and you actively coordinate with the Tribe to address this crisis."

Northern Cheyenne President Rynalea Pena wrote Montana’s congressional delegation July 24 asking them to do something about the BIA’s handling of major crimes on the reservation in recent years. Pena accused the BIA of creating a “lawless society” by not providing enough BIA officers or having a functional local jail, and for not sharing crime statistics with the tribal government.

“Our community is suffering from the tragic consequences of BIA’s reckless disregard or our safety, including fatalities, domestic and sexual violence and abuse,” Pena said in her letter.

Both Sens. Tester, a Democrat, andDaines, a Republican, are members of the Senate Indian Affairs Committee, which has worked on the federal response to violence toward and murder of Indigenous people.

Other recent deaths of the reservation included Kymani Littlebird, 19, found dead outside Lame Deer in June. Littlebird’s family has petitioned the federal government for information and say they have received nothing. Lonnie Flatness, 65, a Marine Corps veteran, was killed in his home July 3. In March, Christie Woddenthigh, 33, was killed by a car, prompting a BIA investigation.

Tester had in December 2019 requested the BIA open Lame Deer Jail as an 8-hour hold facility, but that hadn’t happened by June. The jail is in disrepair.

Tester said in a press release that he called Pena on Wednesday and promised to push federal agents to work with the tribal government and be transparent about their investigations. 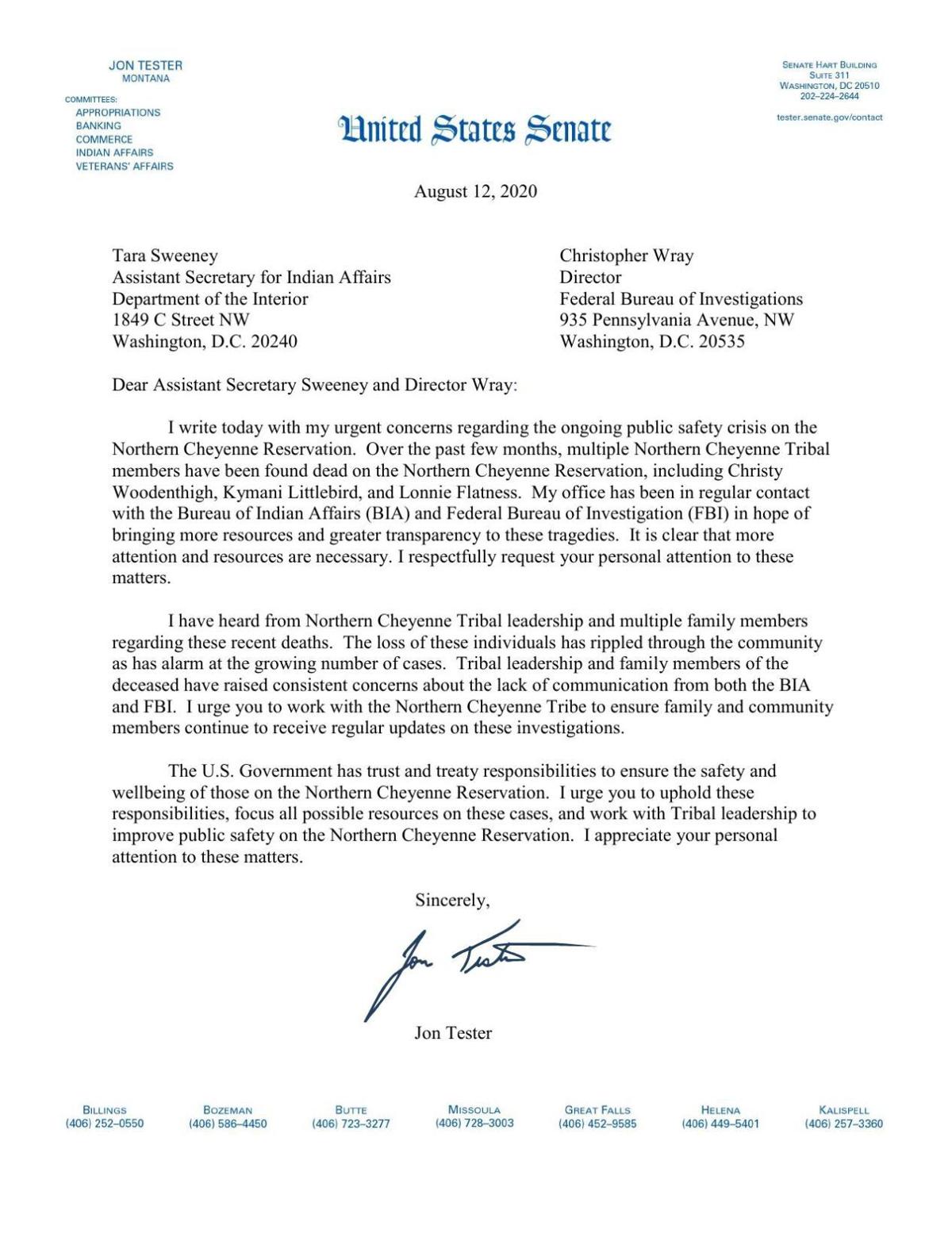 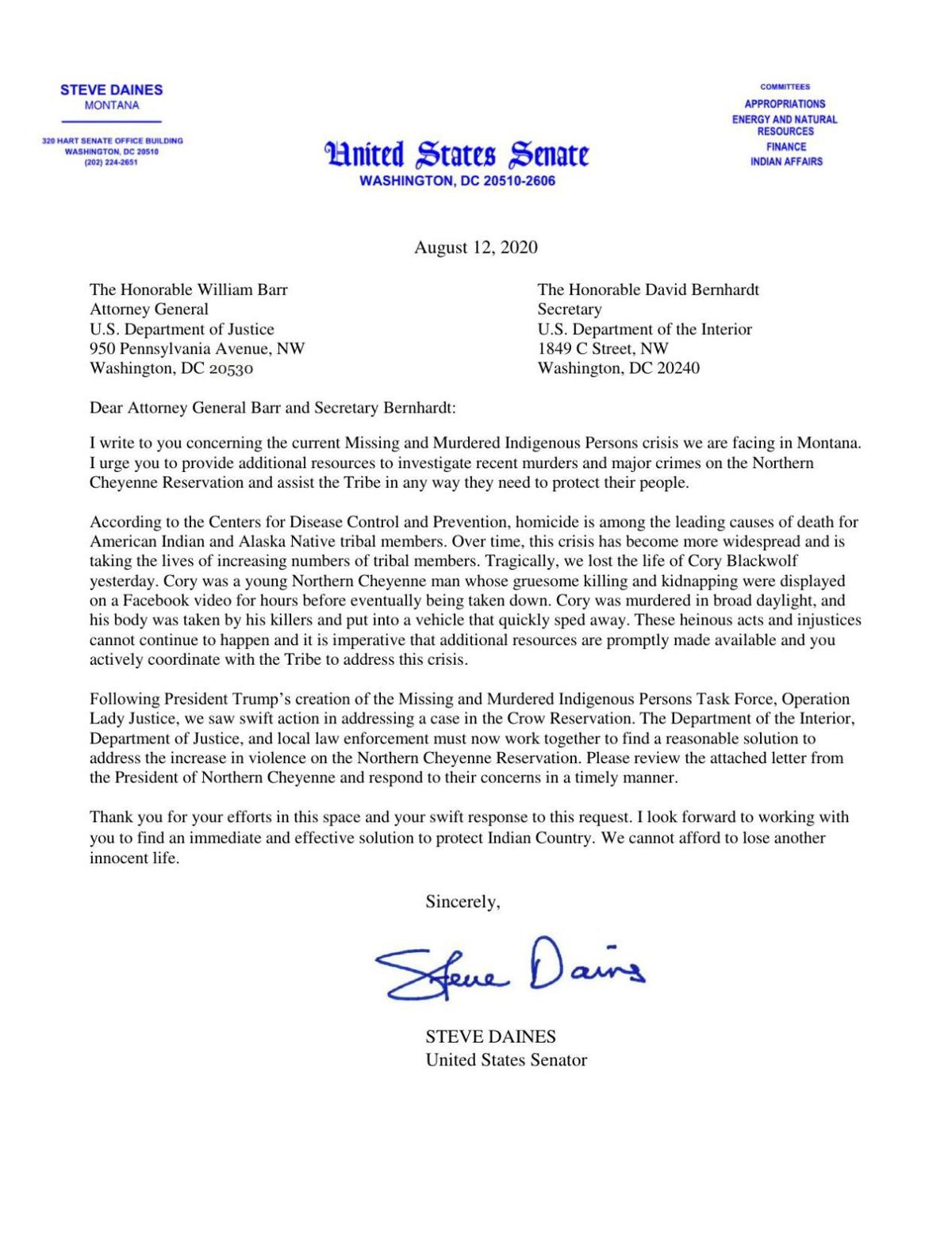 The Northern Cheyenne People’s Camp has transitioned from staffing an emergency response to the outbreak of COVID-19 to providing law enforcement on the reservation.

A federal office meant to solve cold cases in Indian Country opened Thursday in Billings, one of seven across the nation meant to address miss…

A missing 15-year-old girl from the Crow Reservation last seen on Monday has been found safe.

Malinda Harris, whose daughter Hanna was murdered in 2013 near Lame Deer, has been a leader in the push for more awareness of missing and murd…

HARDIN — Cheska Not Afraid came to advocate for her close friend, Shacaiah Blue Harding, during a rally for Murdered and Missing Indigenous Pe…

The death of 16-year-old Selena Not Afraid has been ruled accidental.

The Roosevelt County sheriff is asking for help finding a Wolf Point woman suspected of kidnapping an infant Thursday.

Fatal stabbing at downtown Billings Hardee's was in self defense, prosecutors say

A fatal stabbing in downtown Billings in 2018 was done in self defense, but the stabber faces a felony for hiding the knife from police, the c…

A Rosebud County deputy coroner identified a man who died on the Northern Cheyenne Indian Reservation on Monday. The man's death is being inve…

President Donald Trump on Saturday signed a bill named for a Fargo murder victim to address cases of missing and murdered Native Americans. 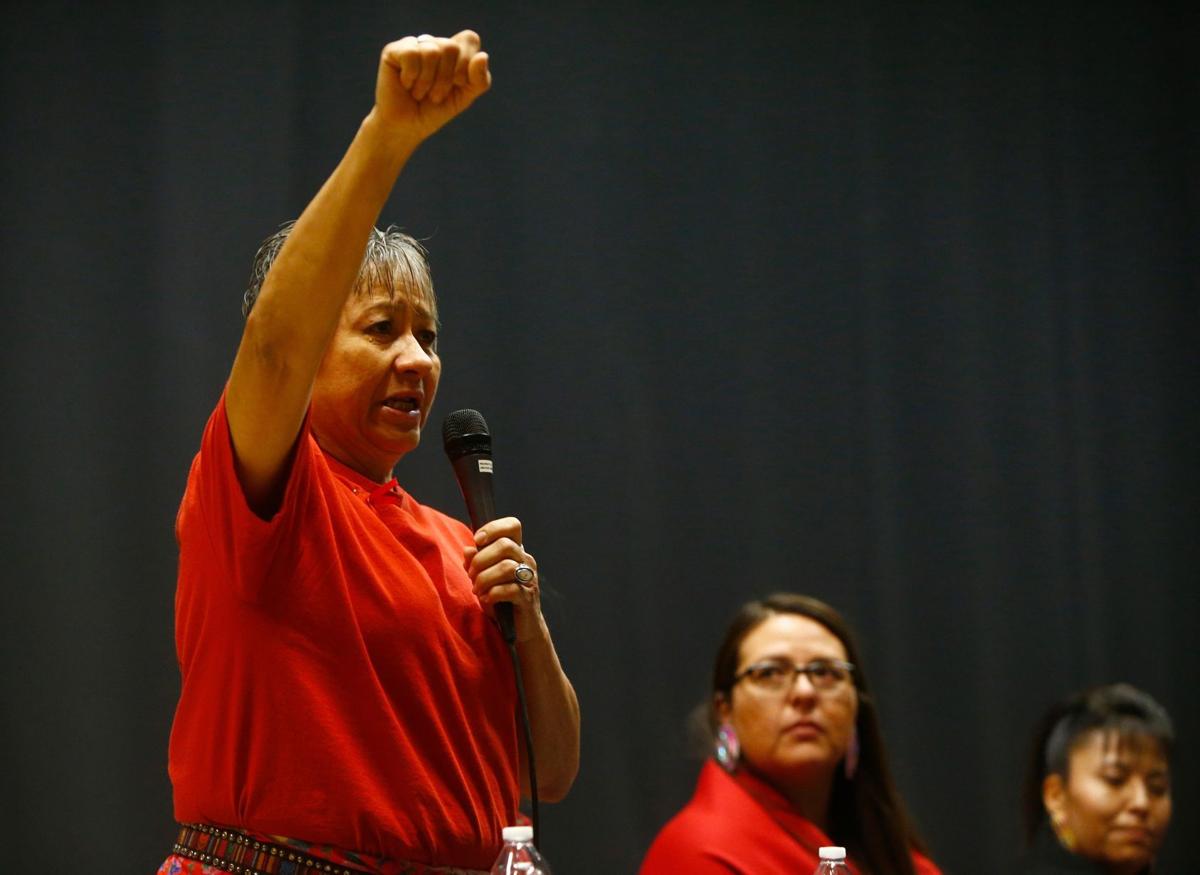 Rynalea Whiteman Pena, president of the Northern Cheyenne Tribe, raises her arm as she stands up during a panel discussion after a screening of "Silent No More" hosted by Billings Urban Indian Health and Wellness Center at the Lincoln Center in February 2019.