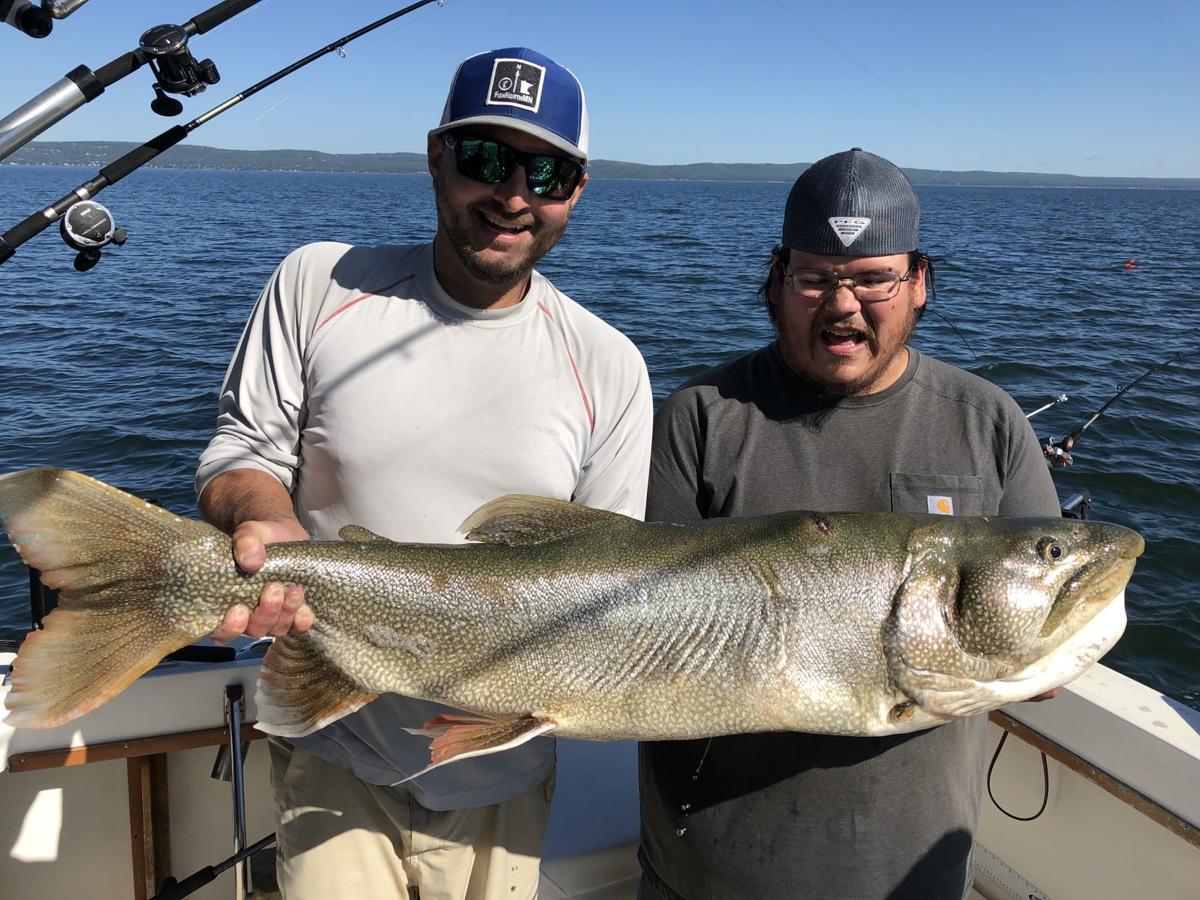 Charter Capt. Jordan Korzenowski, left, and angler Steven Gotchie hold up a 45 1/2-inch lake trout Gotchie caught Aug. 9 just off Duluth on Lake Superior. The fish, the biggest lake trout anyone recalls being caught near Duluth, was immediately released. If it had been kept it may have been the new Minnesota state record lake trout.

DULUTH, Minn. — A lake trout landed during a chartered fishing outing on Lake Superior may have smashed the state record.

Charter captain Jordan Korzenowski at first thought his lure was bouncing on the sandy bottom of Lake Superior about 5 miles out from the Duluth Aerial Lift Bridge.

But when he grabbed the stout rod, he felt the telltale pumps of a big fish.

“I immediately handed it to the client, of course, and then the battle started,’’ Korzenowski said.

What ensued was 20 minutes of sheer fishing fun as the client, Steven Gotchie from Spring Lake in Itasca County, battled what may well have been the new Minnesota state record lake trout.

Only we’ll never know for sure. Gotchie and Korzenowski released the monster fish after it was landed.

The record is 43 pounds, 8 ounces caught in 1955 by an unknown angler fishing in Lake Superior near Hovland in Cook County.

“I’m not going to claim this fish was a new state record. But it’s the biggest fish caught around this part of the lake in a long time,’’ Korzenowski said. “I just feel humble to be part of it. And I think it’s cool that it’s back out there for another angler to catch.”

Korzenowski operates FishNorthMN charters out of Duluth with co-captain Kent Paulsen. It’s their third year in the charter fishing business, although Korzenowski has been fishing the big lake for more than a decade. His boat, True North, had a fairly slow morning Friday when the big fish hit at 9:58 a.m. He had a wire rod with 150 feet of line out in 110 feet of water, which means the lure was very close to the bottom.

He was trolling a green “squid’’ lure with a dead smelt as bait, called a meat rig by big-lake anglers. A few inches in front of that was an 11-inch-long shiny flasher, a piece of metal that attracts fish to come and smell — and hopefully bite — the smelt.

Gotchie "got the fish into 80 feet (of line out on the reel) and then the fish just stopped. It wouldn't budge. He had to pump and reel 5 feet at a time the rest of the way,’’ Korzenowski said. “When that thing first came into view, its mouth looked like a 5-gallon bucket.”

The FishNorthMN team (FishNorthMN.com) always encourages clients to release fish over 30 inches — those are the oldest fish and prime spawners to produce more fish. “But it’s up to them. They're paying me to catch fish so it’s their call,’’ he noted. “But in this case he wanted to let it swim.”

The release was quick and went well, Korzenowski said, adding that the monster trout “rocketed straight down to the bottom. It came out of very cold water, and even at the surface we were at 58-degree water, so it was cold enough for a healthy release.”

Lake trout are native to Lake Superior and are about the apex predator in the big lake. They also are the bread-and-butter fish for sport anglers and charter captains, with salmon less common.

To put this in perspective, this fish was twice the size of lake trout considered trophies for Lake Superior. The average lake trout caught at the western end of Lake Superior ranges from 3-5 pounds, with 10-pounders considered special and 20-pounders rare. There are 30-and 40-pound redfin lakers caught regularly near Isle Royale in Michigan waters. But anything close to 50 pounds is a monster for anywhere in Lake Superior, or anywhere in the world, really. Only in far northern Canadian waters that are sparsely fished do lake trout get any bigger than that.

Peter Dahl of Happy Hooker charters in Duluth has been a charter captain for 32 years and has never seen a 45-inch lake trout come to the boat. Happy Hooker has six boats that make about 1,000 charter trips each summer.

“I don’t know of anything ever caught around here that big,’’ Dahl said. “Anything over 40 inches would be amazing.”

Cory Goldsworthy, Lake Superior area fisheries supervisor for the Minnesota Department of Natural Resources, said it’s hard to estimate the age of Gotchie's big lake trout without taking a fin out of it. Trout over 36-inches long caught and aged by researchers in the past have varied from 15 to 30 years old, he said. But this fish could be as old as 67.

“The fish appears to have been clipped (had a clipped front right fin) so it’s a stocked fish. That right-front fin clip goes as far back as 1952,’’ Goldsworthy said, noting the photo of the big fish showed it had suffered but survived several lamprey wounds.

The Minnesota DNR has a catch-and-release state record category for four species — muskie, sturgeon, pike and catfish — but not for lake trout.