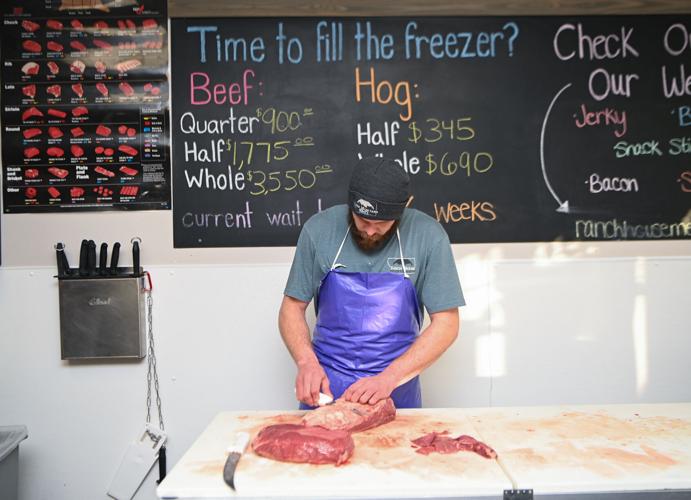 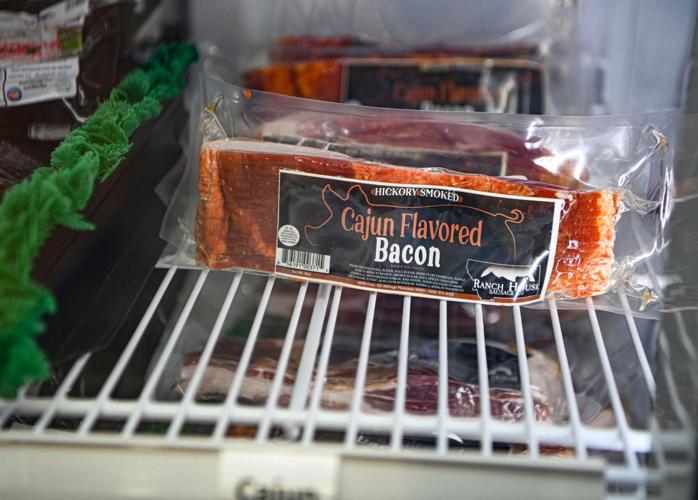 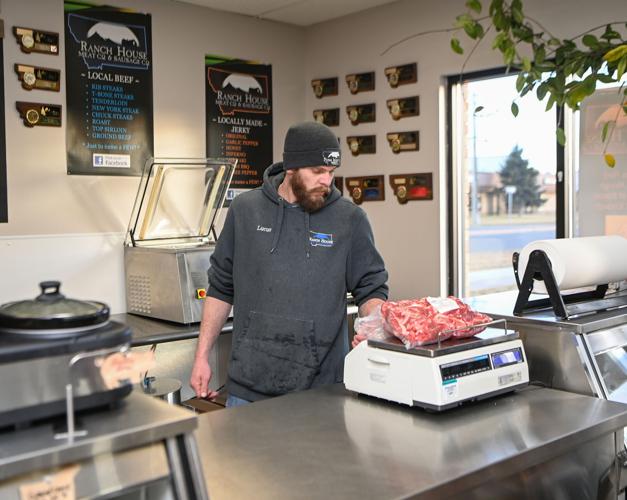 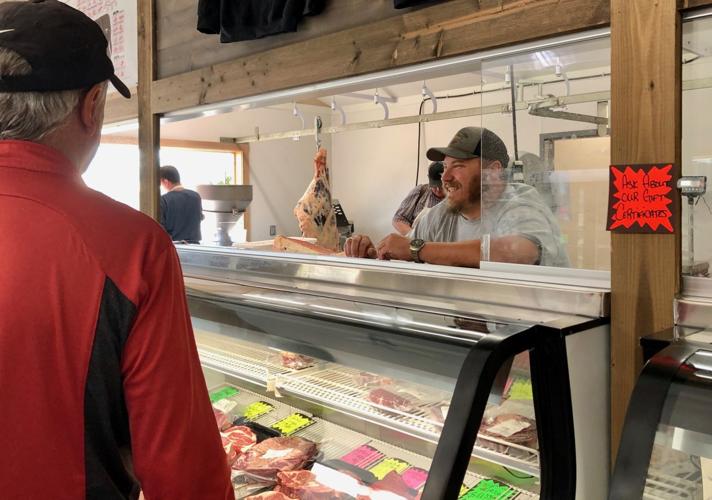 Max Nash greets shoppers at Polson’s Montana Marbled Meats, which focuses on selling beef, lamb and pork raised in the area. The shop makes it own jerky, sausage and brats, too. 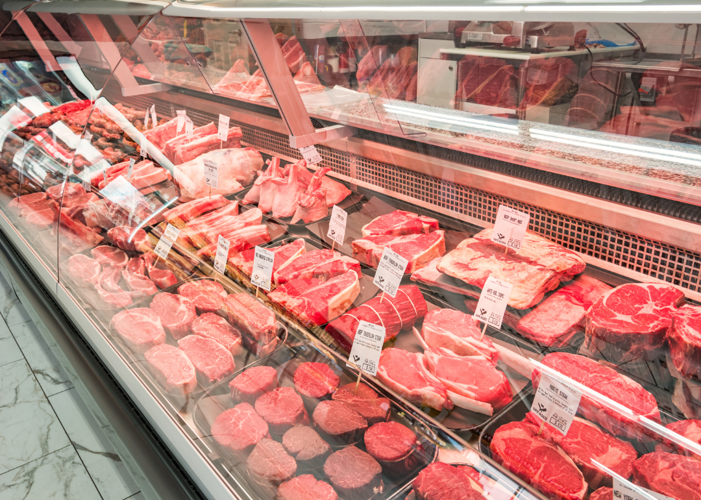 Starting a ranch from scratch is no easy task, but Heidi and Gary Todd were determined to do so. They’d measure their revenue in pennies per pound and stay involved with their lambs and cattle from birth to butcherblock.

It helped that Gary’s town-job was at Big Timber’s Pioneer Meats, one of a dozen or so Montana processors that has gained a toehold in the competitive retail grocery market. Soon, the Todds were being counted among the wave of Montana producers getting meat to market without feeding into the supply chain of a large meatpacker.

The number of cattle slaughtered in Montana has increased 75% since the start of the COVID-19 pandemic, fueled by rancher frustration with monopoly meatpackers and emptying refrigerated meat cases in grocery stores.

In 2022, more than 37,000 head of cattle weighing 500 pounds or more had been slaughtered in Montana, slightly down from 38,500, the high water mark set in 2021. Baked into the count by the U.S. Department of Agriculture are state-inspected slaughters, roughly 7,524 head butchered commercially.

The head count for Montana is still smalltime, given that that national daily cattle slaughter is about 120,000, according the U.S. Department of Agriculture Ag Marketing Statistics Service.

The federal government has invested billions in local meat processing since the start of the pandemic, including close to $20 million in Montana. That initiative hasn’t stopped.

“For Montana, I mentioned Todd Family Meats, but there are five other projects that are being funded and financed in Montana through the Value-Added Producer Grant Program. The key here, I think, is that we're constantly looking for ways in which farmers can figure out new approaches to improve income, especially for small and midsize producers,” Vilsack said. “There are several strategies. One strategy is by adding value to whatever it is they're producing. If you have a Value-Added Producer, Grant, you're essentially in a position to take something that would otherwise be sold as a commodity, you're processing it, you're adding value to it, right on the farm.”

The push for more local beef processing was underway before the pandemic hit. The disparity between what grocery shoppers were paying for beef and what ranchers were being paid for cattle had hit uneconomical levels by January 2020. Slaughter cattle were selling for as little as $0.62 a pound by the time COVID-19 arrived in Montana. Meanwhile, the price of wholesale cuts, which is what grocers buy and butcher down to retail packages, has increased $31.

In the first months of the pandemic, large meatpacking plants began shutting down because of outbreaks. Closed meatpacking plants don’t need live cattle, which further suppressed demand and the prices ranchers were being paid. There are four meatpacking companies that control 85% of the market in the United States.

Ranchers have always sold some beef outside of the supply chain feeding big meatpackers. Typically those transactions are done through "custom exempt" processing, in which a rancher sells an animal pre-slaughter, brings an animal to the butcher to be killed and processed, pays for the work and then the end customer picks it up. It's a common workaround to avoid tighter inspection for retail sale. In 2022, there were 18,134 custom exempt cattle slaughters, reports the Montana Department of Livestock.

Local meat processors might have expanded more during the past two years, but for one major challenge: experienced meat cutters are hard to come by. The struggle to find experienced help persists, said Shane Flowers of Ranch House Meats in Billings.

“There are going to be some challenges to be honest with you, because labor is still an issue. I think that's where the biggest problems are,” Flower said. “It’s been one of our biggest challenges, getting enough guys even to get the job done.”

As meat processing increased in Montana, businesses turned to states like Kansas and Colorado — states with big meatpacking plants — for cutters. But poaching skilled workers from the industry’s big players has its limits. A cutter in a large meatpacking operation often just makes the same cut all day, never gaining the experience of butchering an entire carcass, Flowers explained.

The small processors need cutters who can butcher an entire animal.

“I don't know a processor right now that isn't struggling to get help, as far as that goes,” Flowers said. “We’ve got a brand new one here in Billings. I know the last time I talked to those guys, I think they ended up sourcing some out of Kansas. Over in Hardin, he had to try to get some out of Kansas or Missouri, somewhere down that area. You can't add that many square feet of new processing in Montana, spread out the skilled laborers all over hell and back and actually expect it to be sustainable. You have to hope you get a new class of people that are willing to learn that skill.”

There’s another challenge rarely discussed at the beginning of Montana’s meat processing boom and that’s what happens when large meatpackers begin lowering prices. Beef prices peaked in November 2021 at $7.01 a pound, the price reflecting all cuts averaged together, excluding veal. By November 2022, the average price was $6.50. The data comes from the Consumer Price Index published by the U.S. Bureau of Labor Statistics.

Butcher Ken Braaten, has seen an increase in beef demand at his Kalispell business Farm to Market Pork, where his family-farmed pigs are the core of the operation. He runs a butcher shop in Missoula, as well. Braaten worries that higher beef prices will lower consumer demand.

"The demand is better, We're giving our producers a better dollar amount, which is great, and that's what they deserve. But it's getting passed on to the end user, which I think is potentially a dangerous thing," Braaten said. "When do you start seeing customers ask if other proteins are a better option because nobody can afford a steak? I live in a different economy, or in different world in the Flathead Valley, than a large chunk of Montana does. My business specifically depends a lot on money from people that have moved in and are used to higher prices than what the average Montanan is used to."

Flowers said the large meatpackers — Cargill, JBS USA, Tyson and National Beef — will protect their turf by lowering prices, a move that will put stress on the growing number of small, local meat processors.

“I think Vilsack’s a great secretary, to be honest with you. I'm not trying to knock him at all, but they put out those USDA grants for small processors to grow and do what they want to do. And I think it was a great deal for those guys to do,” Flowers said. “But those big packers got a sense of that, they decided they were going to go out there and compete pretty heavily against the small packer. You know, they control 85% of the processing in the United States. They don't want to go to 80%.”

Soaring US egg prices put pressure on consumers, businesses. Here's what to expect in the months ahead.

A lingering bird flu outbreak, combined with soaring feed, fuel and labor costs, has led to U.S. egg prices more than doubling over the past year.

Green jobs are booming, but too few employees have the right skills. Here are 4 ways to close the gap

Green jobs go beyond solar panel installation and wind turbine maintenance. They’re found in fields from design to economics and in many types of management.

The U.S. Department of the Interior has renamed five places in California, North Dakota, Tennessee and Texas that previously included a racist term for a Native American woman. Thursday's changes come as part of a yearlong process in which the historically offensive word “squaw” has been removed from the names of geographic sites across the country. Interior Secretary Deb Haaland says in a statement that “words matter,” particularly as the agency works to make these sites accessible and welcoming to people of all backgrounds. She calls the term in question "harmful."

Determining who is first in time with water rights has been the duty of the Montana Water Court since 1979.

President Joe Biden walked a muddy stretch of the U.S.-Mexico border and inspected a busy port of entry Sunday on his first trip to the region after two years in office, a visit shadowed by the fraught politics of immigration as Republicans blame him for record numbers of migrants crossing into the country.

The total number of teaching licenses in Montana has decreased by 9% in the last five years, according to the 2022 teacher licensure report from the Office of Public Instruction.

Max Nash greets shoppers at Polson’s Montana Marbled Meats, which focuses on selling beef, lamb and pork raised in the area. The shop makes it own jerky, sausage and brats, too.