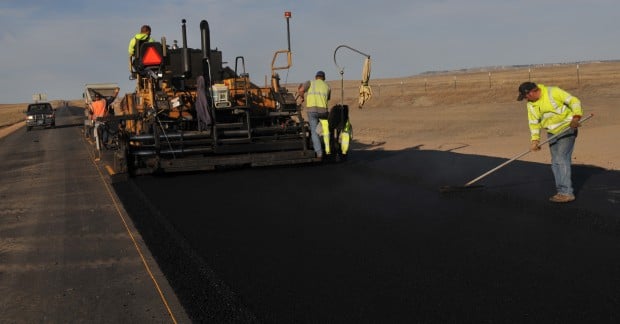 Road crews finish up paving a remote section of Highway 323 between Ekalaka and Alzada Monday evening. The roadcrews they have already seen a huge increase in the amount of traffic that use the road. A pilot car can be seen at left without cars following it. 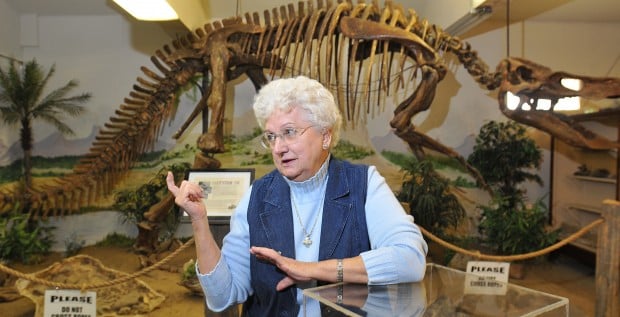 Carter County museum receptionist, Gwen Schultz explains how the museum aquired the dinosaur that was found in the Ekalaka area. The museum has hopes of getting many more visitors now that Highway 323 is paved. 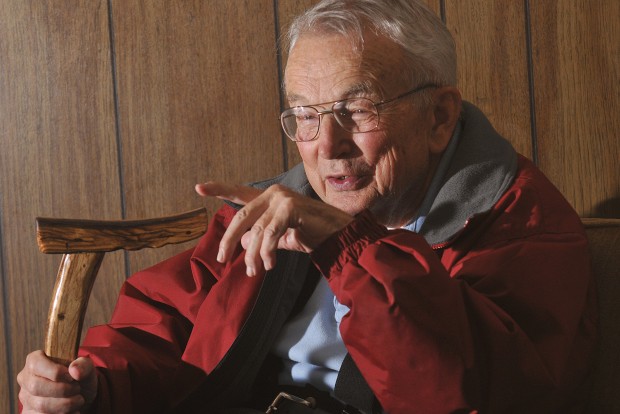 Kup Quade of Ekalaka, has waited all his life to see the paving of Highway 323. His son Mike says he will take him for ride down the road as soon as it is finished. Construction is scheduled to be completed this week. 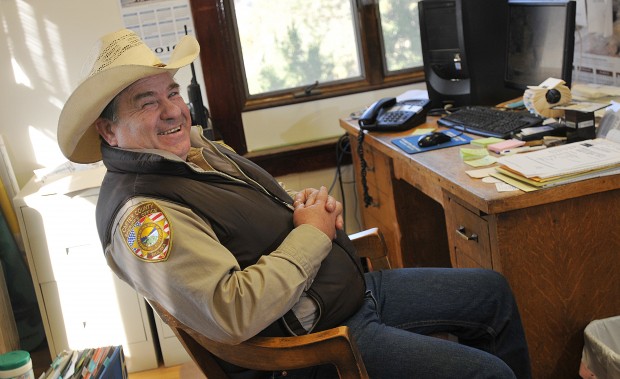 Carter County sheriff, Rusty Jardee hopes the state of Montana will get another highway patrol to help patrol Highway 323 now that it is fully paved from Ekalaka to Alzada.

Road crews work on paving Highway 323 between Ekalaka and Alzada.
ED KEMMICK Of The Gazette Staff

EKALAKA — Residents of this remote town in southeastern Montana have lost one of their main claims to distinction, but don’t look for any of them to mourn the loss.

When the first layer of asphalt was laid down last week on the only remaining stretch of gravel on Highway 323 between Ekalaka and Alzada, Ekalaka could no longer bill itself as the only county seat in the United States that didn’t have a paved road running through it. Until last week, as the locals liked to say, you could drive to it, but you had to back out.

By Thursday afternoon, crews from Prince Inc. in Forsyth finished laying the second layer of asphalt, and on Friday, the entire 72-mile stretch was open for business with no construction delays, all the way from Ekalaka to Alzada.

It’s a day many residents of Carter County thought would never come.

“Oh, you just can’t imagine,” said Gwen Schultz, working as a receptionist at the Carter County Museum in Ekalaka. “We can’t quite get it through our heads that it’s paved all the way.”

Efforts to build a usable road between Ekalaka and Alzada date back to the 1920s. A makeshift farm road was replaced with a gravel road in the 1950s, and during the 1960s and ’70s the asphalt was slowly extended south of Ekalaka as money became available. The piece finished this week was 16 miles long.

The road between Ekalaka and Alzada winds through the pine-covered hills of the Custer National Forest on the northern end, then drops down into wide-open prairies and badlands on the way to Alzada.

Highway 323 is a vital link in that sparsely populated corner of the state, but when the road was unpaved, a blizzard could make it impassable. Even a decent rain could turn it into a gumbo quagmire.

Roscoe Howell, a Carter County commissioner in the 1930s, lived in Albion, about 10 miles north of Alzada. According to “Shifting Scenes,” a history of Carter County, Howell once drove to Belle Fourche, S.D., then to Bowman, N.D., over to Baker and down to Ekalaka to attend a county commission meeting — a round trip of nearly 500 miles.

Like Shultz, Jardee is amazed the road is finished.

“You can quote me on this,” he said. “I never thought they’d get it done in my term.”

His term will end in January. Jardee, who used to drive trucks down that long stretch of gravel, isn’t seeking re-election this year, ending his 20-year career as sheriff.

It’s doubtful anyone worked longer on getting the road done than Roland “Kup” Quade, retired president of the First National Bank in Ekalaka. He was the treasurer of the Central Canadian-United States-Mexican Highway Association even before he moved to Ekalaka from Wibaux in 1967. The association, founded in 1924, always considered a road from Ekalaka to Alzada a top priority.

When Ted Schwinden was governor in the 1980s, he told Quade that as much as he’d like to help, it was unlikely that either of them would see the project completed in their lifetimes. They both made it. Schwinden, 85, is living in Arizona. Quade, 84, is still living in Ekalaka.

His son, Michael Quade, now president of the renamed Summit National Bank, said he and his father will drive down to Alzada one day soon to celebrate the project’s end. He jokingly suggested that he might even set up a folding chair in the middle of the highway to let his father sit down and enjoy it for a spell.

They would have to be careful. The road used to see maybe 40 vehicles a day, but even when the last 16 miles remained unpaved, traffic counts were picking up, partly because of increased usage by trucks serving the booming oil industry in North Dakota and parts of Eastern Montana. Transportation officials figure the traffic count will jump to at least 100 a day now, and then slowly increase.

In addition to making it easier to travel to and from those oil fields, the newly paved highway will help farmers and ranchers as far north as Culbertson move their cattle and other commodities to markets to the south and will give truckers a much more direct route through southeastern Montana.

Everybody is looking at sizable jumps in tourism, particularly during the annual motorcycle rally in Sturgis, S.D. The Carter County Museum, which is on the Montana Dinosaur Trail and whose displays include a huge, nearly complete skeleton of a hadrosaur, expects a lot more people to put the museum on their itinerary.

Erin Lutts, the external-relations manager for Mid-Rivers Communications, oversees rural development efforts throughout the 30,000 square miles of Eastern Montana served by Mid-Rivers. She said the Ekalaka-to-Alzada road project has been a priority for Mid-Rivers since she joined the co-op in 1999.

“It was a project we identified earlier on that would be of benefit to more than one or two counties,” she said. “There’s people interested in that road in our entire coverage area.”

Nancy Espy, chairwoman of the Eastern Montana Transportation Commission, has been on the commission for 12 years and has been pushing long and hard for Highway 323. She lives in Broadus now, but she and her husband used to have a ranch in Carter County, so she knows how important that road is to farmers and ranchers.

“The benefits of that road will be unbelievable,” she said.

She’ll vouch for it

As for claims that Ekalaka was the only county seat in the country on a dead-end road, at least in bad weather, Espy said, “I’m very certain that’s absolutely true.”

She also knows how bad the road was when it was wet.

“Sometimes you had to knock out the gumbo from under your fenders before you could turn right or left,” she said.

Jardee, the sheriff, said the closest wrecking services are in Belle Fourche and Broadus, so when cars got stuck it was usually somebody in his department who had to pull vehicles out of the muck or a snow bank — either that or seek help from a farmer. When he or his deputies went down that road in bad weather, Jardee said, they would go in two trucks in case one got stuck.

But in the years when he was driving a big rig down that road, he figured he didn’t have any choice, since going by any other route was too expensive.

“I’d chain up and plow through,” he said.

Michael Quade used a similar description. There were times when he took the long way through North Dakota to reach Rapid City, S.D., he said, but most of the time, “we just four-wheel-drived up and plowed through it.”

In addition to all the other benefits of a paved road, getting the project completed means it will now become a state road, no longer the responsibility of the county. Carter County Commissioner Jim Courtney said it was expensive to maintain, especially because so many trucks used it even before it was completely paved.

“We had to re-gravel that road every other year,” he said.

Courtney, like so many other people in Carter County, can’t quite get used to the idea that Highway 323 is now a real road.

“It’s hard to believe it,” he said — “driving blacktop south.”

EKALAKA — Highway 323 runs fairly straight between Ekalaka and Alzada, but the long process of getting the road built was full of twists and turns.

Photos from the paving of Highway 323

Road crews finish up paving a remote section of Highway 323 between Ekalaka and Alzada Monday evening. The roadcrews they have already seen a huge increase in the amount of traffic that use the road. A pilot car can be seen at left without cars following it.

Carter County museum receptionist, Gwen Schultz explains how the museum aquired the dinosaur that was found in the Ekalaka area. The museum has hopes of getting many more visitors now that Highway 323 is paved.

Kup Quade of Ekalaka, has waited all his life to see the paving of Highway 323. His son Mike says he will take him for ride down the road as soon as it is finished. Construction is scheduled to be completed this week.

Carter County sheriff, Rusty Jardee hopes the state of Montana will get another highway patrol to help patrol Highway 323 now that it is fully paved from Ekalaka to Alzada.