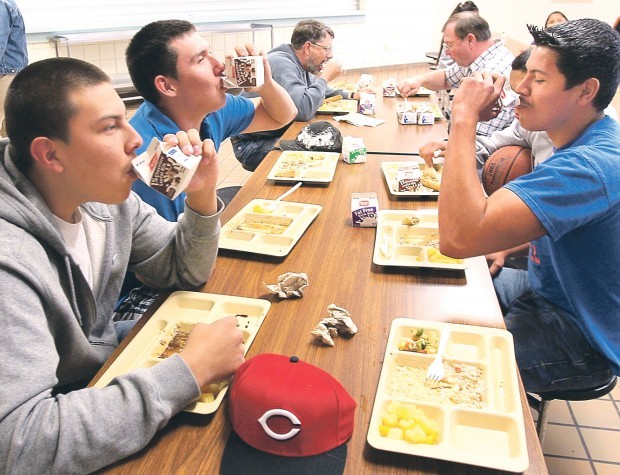 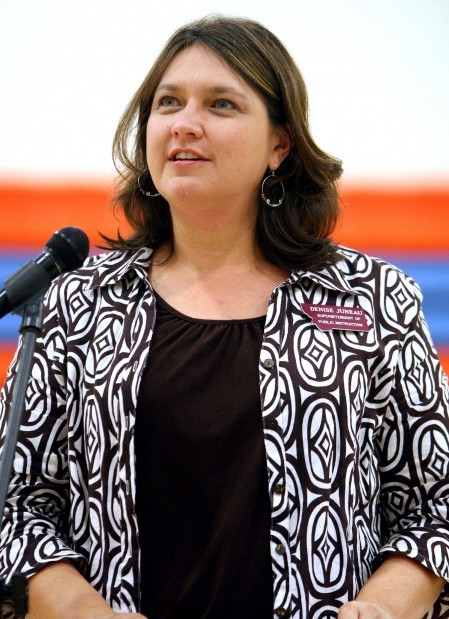 Students play basketball during their lunch period at Lodge Grass High School in late May. 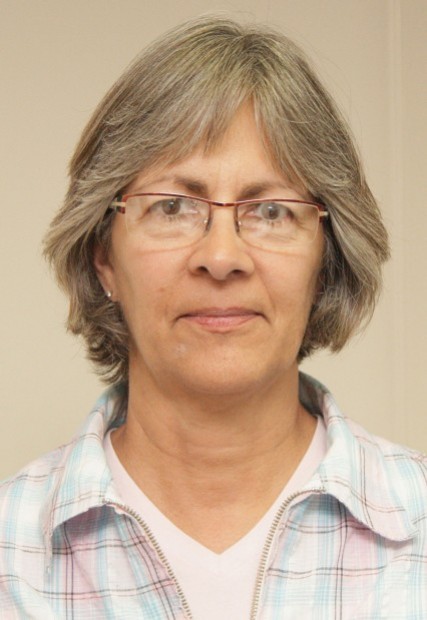 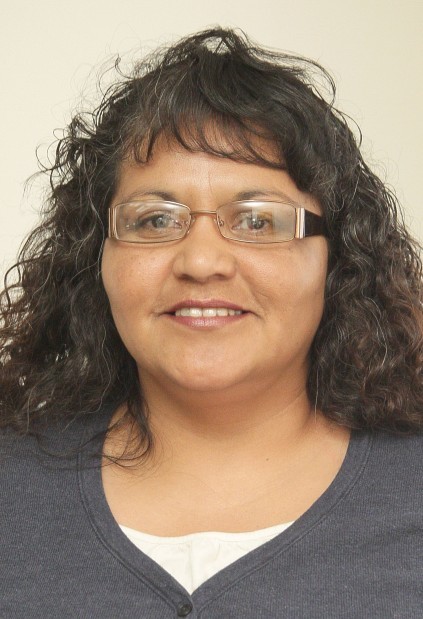 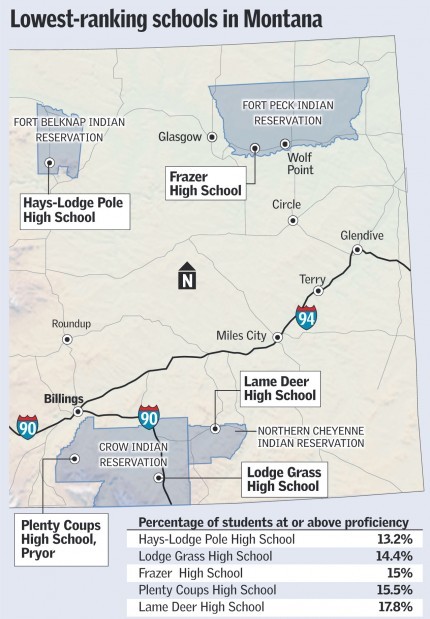 Students play basketball during their lunch period at Lodge Grass High School in late May.

First in a two-day series

There is no glory for the five high schools on the bottom of Montana’s academic ladder — except perhaps on the basketball court.

It won’t come as a shock to most that the lowest-ranking schools in the state are in isolated communities on Indian reservations, that the students are among the most economically disadvantaged or that the schools have been failing students for years.

What may be a surprise is that they are all in Eastern Montana. From the bottom up, according to proficiency scores reported by the Montana Office of Public Instruction (OPI), they are Hays-Lodge Pole with 13.2 percent of its students at or above proficient levels; Lodge Grass High School, with 14.4 percent; Frazer High School with 15 percent; Plenty Coups High School in Pryor at 15.5 percent; and Lame Deer High School at 17.8 percent.

Each school struggles in its own way, but there is one constant, said Denise Juneau, Montana superintendent of schools. Poverty.

“We had a guy here who used to do a lot of data analysis,” she said. “He found four basic factors — deep poverty, poverty that spans generations, areas of concentrated poverty and isolated impoverished communities. Look anywhere in the country and you’ll find schools with those factors not performing well.”

Almost as soon as Juneau was elected to office in 2008, supporting these and other faltering schools became one of her top goals. When opportunity came knocking in the form of an additional $9.7 million in federal stimulus money, OPI was already ahead of the game in formulating a strategy to help what were defined as Montana’s “persistently lowest-achieving schools.”

OPI’s application for the additional Schools Improvement Grant (SIG) has been submitted to the federal government. If it is accepted, and OPI seems confident that it will be, the total available to help the lowest-performing schools would be $11.4 million.

All but Hays-Lodge Pole, which could not reach agreement with its teachers’ union, have joined in partnership with OPI in a major new program aimed at propelling the schools and their students to new academic heights.

“It’s like a huge leap of faith,” said Sandy Watts, Big Horn County superintendent of schools. “But there are great kids, great parents in every community wherever you go. This is a perfect opportunity to step up.”

Lodge Grass and Pryor are eager to set an example they hope will serve as a precedent for other schools not doing as well as they would like, she said.

OPI’s strategy has not been without controversy — school officials who worry that local control will be lost and staff who fear they will be fired. But there are also strong feelings among parents and trustees that this may be their best shot at a dramatic turnaround.

“We named them Schools of Promise,” Juneau said.

The approach will be positive and intense, she said. In most of the schools, OPI specialists are already in place studying curriculum, talking with school boards and parents, working with teachers and preparing to transform the schools on a harrowingly short deadline.

“When students walk into school in the fall, things will be very, very different,” Juneau pledged.

With an infusion of federal stimulus dollars, each district could be receiving between $75,000 and $2 million in extra assistance every year for three years.

That doesn’t mean that OPI will be writing big checks and mailing them to the districts. Most of the assistance will come directly from the state in the form of on-the-ground experts in the schools who will serve as mentors, resources for best practices and coaches for teachers, administrators and school boards.

OPI will use the money for planning, curriculum review and teacher and staff training — some of it in-school and a lot of it over the summer so districts can hit the ground running next fall. Depending on where the gaps are, the grant could provide money for textbooks, technology and some improvements to the schools themselves.

There will be new methods of evaluating teachers, the details of which are still under negotiation, but which will include, for the first time, a look at student achievement. Teachers who continue to meet goals and improve will see bonuses and other incentives. They’ll also be compensated for extra training and extra time working with students either in the classroom or one on one.

Teachers who do not improve may be removed. But before that happens, teachers will have access to any training they need to do their jobs.

Students may get a full range of assistance beyond the classroom, Juneau said. She would like to see services dedicated to students’ mental and physical health wrapped into the in-house services available to students. Children can’t learn if their attention is distracted by more immediate needs that seem concentrated in these poverty-plagued reservation schools.

Transformation will not be painless. For starters, by federal mandate, school principals who have been in place more than two years will have to be replaced. In Lodge Grass, Principal John Small, a veteran of 15 years at the helm, will step aside and receive a new assignment somewhere in the district.

The same will happen to his sister, Veronica Small Eastman, who has been principal at Lame Deer High School for three years. She has a contract for next year, but it does not say what her new job will be.

Pryor will keep its principal. Frazer’s superintendent and principal, Don Johnson, is retiring this spring. A replacement will be coming from Nebraska.

Elizabeth Old Chief, chairman of the Lodge Grass High School Board, said trustees did not want to replace Small, but realized that there was no choice if the district was to remain in the Schools of Promise program. Everyone recognized that the board could not turn down such a rare opportunity.

“It was something we had to do,” she said. “We aren’t able to compete for grants. Parents are taking their kids to different schools. We just slowly started running out of resources because of our inability to compete.”

In terms of educational evolution, Schools of Promise is progressing at breakneck speed. Much of it will be in place next fall.

“When teachers and students walk in the door next fall they will notice a difference,” said Bryan Kott, interim superintendent at Lame Deer. “The atmosphere and the attitude will be different.”

“We want to make school a place children want to get up and go to every morning,” Juneau said.

State would handle funding for Schools of Promise effort

Second in a two-day series

State gets $11.5M for struggling schools

HELENA — Montana  will receive an $11.5 million federal grant to help turn around up to seven of the state's struggling schools, the state's t…