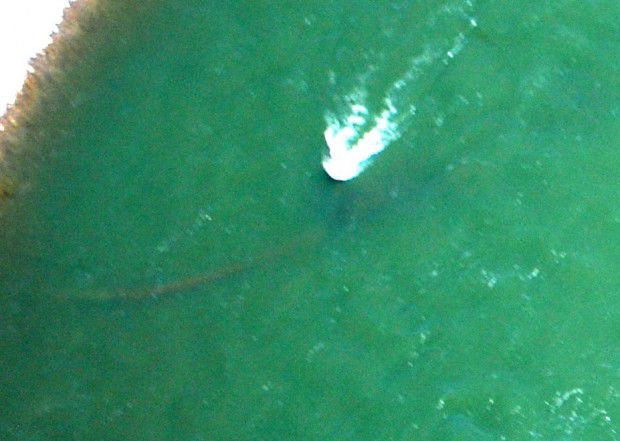 The broken Silvertip pipeline breaks water on the north side of the Yellowstone River in this aerial photo taken Aug. 27. 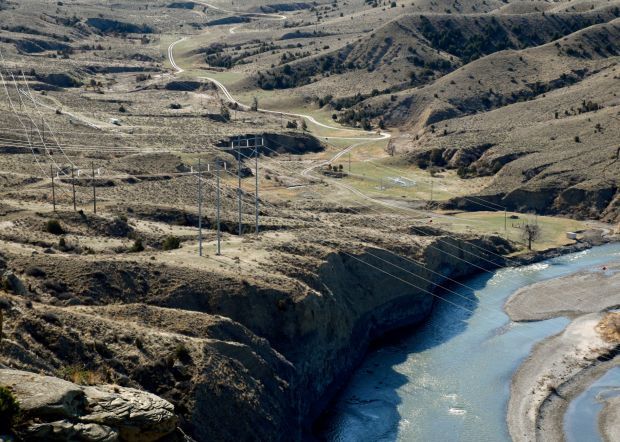 The Bitter Creek drainage on the south side of the Yellowstone River where a crew is preparing to install a new oil pipeline under the river.

Pipeline is laid out along the Bitter Creek drainage south of the Yellowstone River as crews recently were preparing to replace an oil pipeline under the river. 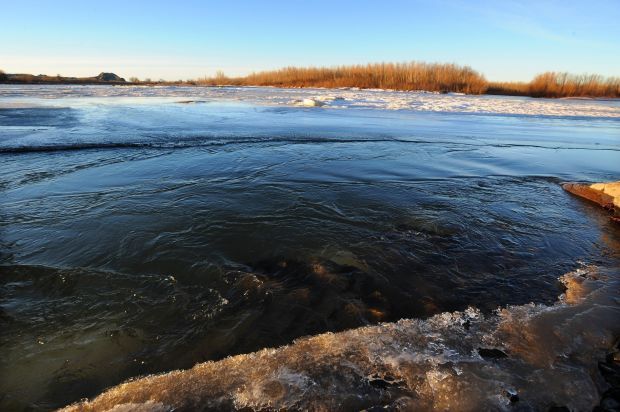 Water flows past Glendive after Bridger Pipeline’s oil spill in the Yellowstone River on Jan. 23.

Two pipelines have dumped 70,000 gallons of crude into the nation’s longest free-flowing river in the last four years. What they have in common is that right up until breaking, both were considered safe.

That “all clear” by regulators has sparked concern about whether the federal government is setting the bar too low for pipeline safety and ignoring destructive river conditions. There are 39 gas and oil pipelines beneath the Yellowstone River, and many, like the two that have polluted the Yellowstone since 2011, are buried less than 10 feet beneath the riverbed. The federal government requires a minimum of only 48 inches of cover over pipelines in rivers 100 feet or wider.

The Yellowstone River is constantly rechanneling, in some places migrating several hundred feet during a few decades. It’s not only moving outward, but also downward, carving deeper trenches in the river bottom in some places. The river’s flows fluctuate widely, from 3,000 cubic feet of water per second in downtown Billings this week to more than 60,000 cubic feet during runoff last spring.

At some pipeline crossings, the changing river conditions are not only significant, but also unique. Federal pipeline regulations aren’t addressing those site-specific hazards, said Karen Boyd, a geomorphologist who has documented decades of change along the Yellowstone River.

“I guess my issue with the pipelines is that there are very general requirements for the pipelines, and it’s really hard to take into account all those things,” Boyd said.

The river into which oil companies trenched and buried pipelines decades ago doesn’t necessarily resemble today’s Yellowstone. Some of the transformation is natural, some is human caused. Every bridge pillar, every old car sunk in the river to riprap a bank from erosion or block a side channel changes the way the Yellowstone behaves.

Boyd, who helped map the river for the Yellowstone River Conservation District Council, said there’s more than 130 miles of “armor” along the river’s banks. That armor keeps the river from spreading outward, but also forces the Yellowstone’s powerful current downward. Since the 1950s, the Yellowstone has also lost 90 miles of side channels, which means more water is traveling down a single trough that can only get deeper over time.

In the case of the Poplar pipeline crossing, where 30,000 gallons of Bakken crude spewed into the Yellowstone and contaminated the drinking water of nearby Glendive, the river has changed a lot, migrating 256 feet since 1950 and also deepening as it moves to a single channel. River flows here in recent years have been as high as 100,000 cubic feet per second.

“That’s a big river, and so this whole issue of cover over trenched pipelines appears to be a very arbitrary requirement that is not in scale with the river,” Boyd said.

The river can scour through several yards of riverbed in a single year, easily exposing a pipeline. In fact, around bridge pylons, the Yellowstone can scour down 20 feet during peak flows and later fill the hole as currents calm and release silt. Pipeline companies might miss this entire process because of infrequent checks on crossings.

The federal regulations for pipelines at river crossings are not very protective, said Rebecca Craven of the national watchdog group Pipeline Safety Trust. Crossing inspections are left up to pipeline owners and required only once every five years. The federal requirement that pipelines be buried at least 48 inches only specifies the depth at the time of installation and not forever after.

The federal Pipeline Hazardous Materials and Safety Administration told The Gazette recently that while the submerged section of pipe must only be inspected once every five years, the pipeline right-of-way on dry land is inspected 26 times a year. Safety requirements might be higher for pipelines at river crossings near populated or environmentally sensitive areas, or where rivers are a community’s sole drinking water source.

There isn't much on the regulatory books about meeting unique river challenges.

At both the Silvertip and Poplar pipeline breaks there were unique changes to the river upstream that should have warned officials that the risk of a pipeline disaster was increasing.

At the Poplar pipeline crossing, a permanent island had formed immediately upstream from the Poplar pipeline since the pipe’s installation in 1967. At least initially, the island was more of a sandbar constantly relocating to accommodate spring current, but then trees took root on the sandbar, which made the island more permanent. The river that once split the island began favoring one channel. As that favored channel began taking on more water, it deepened. Landowners who were worried about losing land to erosion began girding their banks, which not only directed more water to the channel, but also made it impossible for the Yellowstone to expand outward.

If there’s one rule to river expansion that bodes poorly for trenched pipelines, Boyd said, it’s that rivers that can’t expand outward expand downward by scouring the river bottom.

Something, or things, had scoured the Poplar pipeline bare by Jan. 17. The pipeline owner, Bridger Pipeline LLC, had last been inspected in 2012 and based on that inspection, federal regulators considered the pipeline adequately buried at a depth of 8 feet beneath the riverbed. After the ice cleared this spring, it was determined that 120 feet of the pipeline lay bare on the river bottom.

The rusty brown image of the broken Silvertip pipeline, which spewed 42,000 gallons of oil into the Yellowstone in 2011, could be seen snaking bare for several yards beneath the Yellowstone’s deep green waters after flood waters receded near Laurel. In that case, a railroad bridge and highway bridge had constricted the Yellowstone River, forcing the current to scour downward during spring flooding.

Even as oil pipelines make the news because of the controversial Keystone XL pipeline from Canada to Oklahoma, there’s been little discussion about the dangers of river scour, said engineer Chris Thornton. Thornton is a professor at Colorado State University, where some of the nation’s best river scour research is done.

Scour isn’t just something that affects pipelines; it’s something to which the pipelines actually contribute and accelerate once their cover is swept away.

“It can cause scour in the river. It becomes a weir by definition, the water plunges over the top of it scouring the downstream side. Then when it passes under it, you have a floodgate that can turn flow,” Thornton said.

There are no sure ways to gird a trenched pipeline from river scour. In some cases, crews use blocks of concrete webbed together with cables to drape over trenches and protect them from the river. Pipeline companies might also use mattress-style bags of grout draped over a trench and mixed with water to form a concrete blanket.

“You can also bore them deeper. It’s frightfully expensive to do,” Thornton said.

After Exxon’s Silvertip pipeline broke downstream from Laurel in 2011, Montana leaned on the federal Pipeline Hazardous Materials Safety Administration for a more detailed report on the major pipe crossings across state rivers.

"At the time, they looked at 39 crossings that were open cut (trenched),” said Bonnie Lovelace, of Montana’s Department of Environmental Quality. “Now, it’s down to 25.”

Pipeline companies reported plans to begin boring several of the pipelines deep below Montana rivers over five years. Much of that work is done, including some drilling that started before the 2011 Silvertip pipeline break.

“Obviously, we’re in the business of transporting petroleum, and that’s a responsibility, one we take real serious,” said Mike Stahly, CHS pipeline safety manager. “We need to take care of the public and the environment, and obviously leaks on the Yellowstone aren’t acceptable.”

The cost of drilling horizontally for a pipeline beneath a river can range from $100 to $400 a foot, Stahly said, depending on how hard the ground is.

This month, the PHMSA submitted an updated pipeline report to the state of Montana. The report indicates that some companies have been aggressively boring pipelines deep below the river. Phillips 66 has bored 10 pipelines deeper beneath Montana rivers since 2011. Phillips just started work on an 11th pipe south of Billings this month, according to permits.

Spectra Energy was second, with six pipelines bored deep in the past four years. CHS has bored six pipelines, though much of its work predated the Silvertip spill, and it has done one since.

The two dozen trenched pipeline crossings remaining on Montana rivers are typically at depths of 10 feet or less. One of those crossings is a wide, five-pipeline trench located at Coulson Park in Billings, where an Interstate 90 bridge and river rechanneling are sending the Yellowstone deeper less than a mile from the Lockwood drinking water intake.

Pipeline that spilled into Yellowstone to be removed

The company responsible for a 30,000-gallon oil spill into Montana’s Yellowstone River will try to remove its breached pipeline Wednesday as r…

BISMARCK, N.D. — The North Dakota Game and Fish Department says a January oil pipeline spill on the Yellowstone River did not affect paddlefish.

Montana’s four oil refineries — Calumet in Great Falls, CHS in Laurel, Phillips and ExxonMobil in Billings — have been able to refine tar sand…

Before the U.S. Senate decides the future of the nation’s oil pipeline police — the Pipeline and Hazardous Materials Safety Administration — t…

BISMARCK, N.D. — A company with a history of oil field-related spills in North Dakota and Montana is being hampered by winter weather in its c…

The broken Silvertip pipeline breaks water on the north side of the Yellowstone River in this aerial photo taken Aug. 27.

The Bitter Creek drainage on the south side of the Yellowstone River where a crew is preparing to install a new oil pipeline under the river.

Pipeline is laid out along the Bitter Creek drainage south of the Yellowstone River as crews recently were preparing to replace an oil pipeline under the river.

Water flows past Glendive after Bridger Pipeline’s oil spill in the Yellowstone River on Jan. 23.