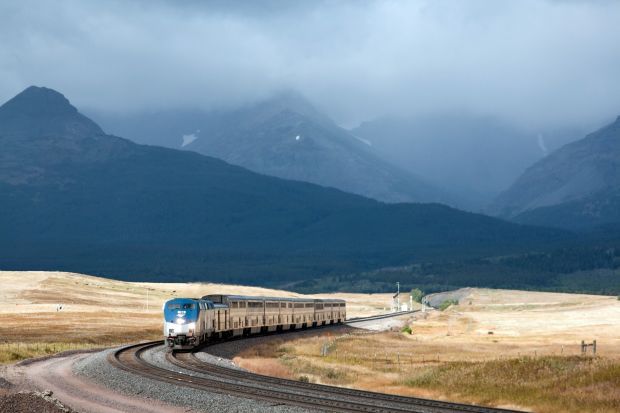 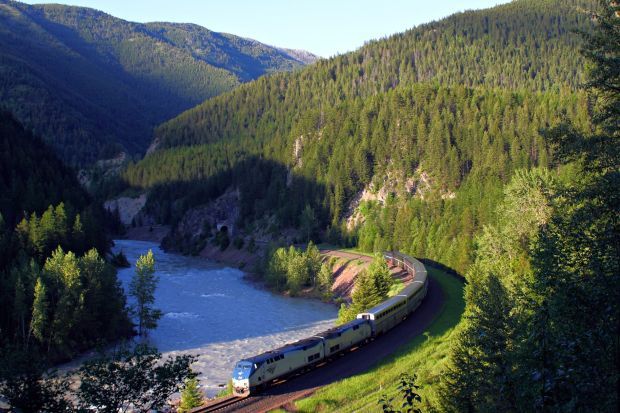 WHITEFISH — About an hour before dawn on a Friday morning, Amtrak's eastbound Empire Builder crept into the station, already an hour and one minute late into its 2,206-mile journey from Seattle to Chicago.

Under the glow of the yellow station lights, a handful of passengers hauled their luggage off the train while another group waited to climb aboard. In the minutes before the train pulled out of the station to continue its journey east, the sparse crowd had already dispersed and the platform, with the exception of a conductor and a woman looking for her lost bags, was empty.

Eighty-five years after its debut as the Great Northern Railway's premier passenger service to the west, the Empire Builder is broken.

Extreme freight congestion in the northern plains, particularly in North Dakota's Bakken region, has resulted in major delays for Amtrak's passenger service between Chicago and Seattle and Portland. Five years after the Empire Builder had some of Amtrak's best on-time performance rates, even outpacing Amtrak's high-speed Acela train between Boston and Washington, delays of three to five hours are now commonplace. It was even worse this winter, when the train was sometimes 12 hours late.

In June, the westbound Empire Builder, train No. 7, stayed on schedule a scant 10 percent of the time. The eastbound train, No. 8, had a zero percent on-time rate.

In hopes of addressing the delays, Amtrak modified the train's schedule in April. Now it travels through Northwest Montana earlier in the morning and later at night, much to the chagrin of area businesses that say the change has done little to help the Flathead Valley, especially during the busy summer tourism season.

Passengers are also starting to notice the delays and are abandoning train travel in droves. Ridership on the Empire Builder from June 2013, when it moved 49,813 people, to June 2014 has dropped 19 percent. The decline comes just two years after the train had its best year ever, hauling more than 543,000 people in 2012, a 15.8 percent increase over the previous year. Meanwhile, the Empire Builder's decline comes as flights out of Glacier Park International Airport are up more than 12 percent.

The situation on the train is, as National Association of Railroad Passengers (NARP) Montana representative Barry Green put it, "disheartening and disgusting."

But it wasn't always this way. On June 11, 1929, the first Empire Builder departed Chicago with a train of luxury passenger cars that were, according to the Great Northern Railway Historical Society, "the last word in comfort, amenities and speed for their day." The train's name came from the Great Northern's founder, James J. Hill, who dedicated his life to building a railroad empire that still spans the continent today.

The train crossed the country in a brisk 63 hours. In 1935, an added bit of luxury arrived when the train was outfitted with air-conditioned passenger cars. For more than four decades the train was the pride of the Great Northern, and Northwest Montana, especially the area around Glacier National Park, was among its most popular destinations.

In March 1970, the Great Northern merged with three other railroads to become Burlington Northern, later renamed BNSF Railway. The 1960s and 1970s were a trying time for America's railroads, especially those in the passenger business. With the growing popularity of commercial flights and an ever-expanding highway system, railroads were losing more and more passengers to planes and cars.

In order to save intercity passenger service, Congress passed the Rail Passenger Service Act in 1970 that led to the creation of Amtrak, a private, for-profit railroad company owned and funded by the government. Amtrak ran its first trains on May 1, 1971, including the Empire Builder. As part of the deal to relieve freight companies of having to operate passenger trains, the railroads agreed to let Amtrak run its trains on their tracks.

Amtrak had its fair share of growing pains and was the subject of numerous cuts as it tried to shed redundant routes in the 1970s and 1980s. Through it all, the Empire Builder survived.

In 2012, Amtrak boasted its biggest year ever, when it hauled 31.2 million passengers nationally, an increase of 49 percent since 2000. In 2013, Amtrak's ridership numbers increased again, moving 31.6 million passengers.

While Amtrak was hauling more passengers, BNSF was starting to haul even more freight, particularly intermodal, grain and crude oil from North Dakota. The traffic increases created a railroad "logjam," wrote National Association of Railroad Passengers president and CEO Ross Capon in a letter to U.S. Secretary of Transportation Anthony Foxx in January. In that same letter asking Foxx to step in and find a solution, Capon accused BNSF of giving crude oil a "priority over people."

"I think the increase in (freight traffic) caught us all off guard," said Green, NARP's Montana passenger rail advocate and a locomotive engineer for 37 years. "There's just a lot of freight to move."

The problems facing Amtrak were made even worse by a historically harsh winter in North Dakota and Montana that caused derailments and avalanches, which closed the rail line over Marias Pass. On the days the Empire Builder wasn't replaced with a bus, it sometimes ran 11 or 12 hours late.

"All of those factors combined and created a perfect storm for the Empire Builder and it struggled," said Jim Brzezinski, Amtrak route director for the train. "When you go from being the number one on-time performance train on the entire system to being dead last, it's a shock."

Yet NARP vice president Sean Jeans-Gail points to another reason why the Empire Builder and other Amtrak trains have been running late.

In 2008, the Passenger Rail Investment and Improvement Act gave Amtrak the ability to penalize railroads if passenger trains were consistently late for two consecutive quarters because of freight-train congestion. The system appeared to be working and during the 2013 fiscal year, Amtrak trains were on schedule 85 percent of the time.

But in 2011, the Association of American Railroads sued the U.S. Department of Transportation, arguing that the new rule was illegal, in part, because Amtrak helped write it. In 2013, the U.S. Court of Appeals overturned the rule, saying that Amtrak is a private company and that it could not regulate other private companies. Since then, Amtrak's on-time, system-wide performance has dropped nearly 12 points.

In June, the Supreme Court announced it would review the appellate court decision. The case is expected to be argued late this year or early next year. Amtrak spokesperson Marc Magliari said although Amtrak is not part of the lawsuit, it will be watching the case with interest.

In hopes of improving the on-time performance of the Empire Builder, Amtrak changed its schedule to allow the train more time to travel from station to station. The new schedule has the train leaving Seattle and Portland three hours earlier going east. That means it arrives in Whitefish at 4:26 a.m., rather than its normal 7:26 a.m. The westbound run also arrives later, pulling into Whitefish just before 10:30 p.m. — when it's on time.

Brzezinski, the route director, said the changes were made so the Empire Builder can meet other trains in Chicago and passengers can make their connecting trips.

But the changes don't sit well with Dylan Boyle, director of the Whitefish Visitors and Convention Bureau. He said the visitor center has made a big push in recent years to encourage people to take the train to Whitefish, even offering a 20 percent discount during winter months to entice skiers and snowboarders to visit Whitefish Mountain Resort. The earlier and later arrivals make taking the train less convenient for visitors.

"Where can people go at 4:30 a.m. because there is nothing open at that hour," Boyle said, adding that the train station closes at 5 a.m. "It's not very welcoming to get off the train and find a dark town. That's not the experience we want for our visitors."

Boyle, citing data from the University of Montana's Institute for Tourism and Recreational Research, said the consistent delays and inconvenient arrival and departure times have resulted in fewer people coming to Whitefish by train. According to the institute, 65,000 people arrived or departed on the Empire Builder in Whitefish in 2013. From January to May of this year, there have only been 20,000 riders and it's unclear if those numbers will catch up.

Christie Dunn, general manager of the Belton Chalet in West Glacier has seen a decline in guests coming from the train as well. She said in years past there would be a rush of guests at the front desk of the historic railroad hotel when the train arrived, sometimes requiring two staff members, but that hasn't happened this summer.

Brzezinski said Amtrak understands that the new arrival times are inconvenient for communities in Northwest Montana and that they hope to return to the old schedule soon. When that might happen is unknown.

One thing that is clear is that the old schedule will probably not return until after the construction season. This year, BNSF Railway is spending $5 billion on infrastructure improvements across its 32,000-mile system, including $1 billion on its line across the northern part of the country throughout Montana and North Dakota. BNSF spokesperson Matt Jones said the investment would help expand capacity so BNSF's rail lines through the region can handle the additional freight trains and, hopefully, keep Amtrak's Empire Builder on time.

"There is a light at the end of the tunnel," Brzezinski said. "Things are improving, but we do have a long way to go."

Brzezinski said the delays have resulted in a drop in customer satisfaction, but noted one area that hasn't been impacted: customer service. Brzezinski, who manages the crews who work onboard the train, said despite this year's hardships riders have given Amtrak's employees on the Empire Builder high marks.

Each Empire Builder train has an onboard crew of about 12 people, including sleeping car and coach attendants, kitchen staff and lounge car employees. Each crew works six days straight, or one round trip, and then has six days off. The delays, however, have meant many shifts run longer than normal.

"These crews are tired but they are still delivering good, friendly service," Brzezinski said.

Brzezinski said solid customer service would be the base of the Empire Builder's recovery - after that "we just need to get the train over the road."

Boyle is also hopeful that the Empire Builder, a train with deep roots in Whitefish and Glacier National Park, can return to its former glory.

"The railroad is iconic in Whitefish and being able to come here by train is a big part of our brand," he said. "I'm just worried we could lose that."

NEAR WAGNER, Mont. — The train rolls past distant hills.

Over three decades have elapsed since Amtrak's North Coast Hiawatha last rolled through southern Montana. But following the abandonment of the…