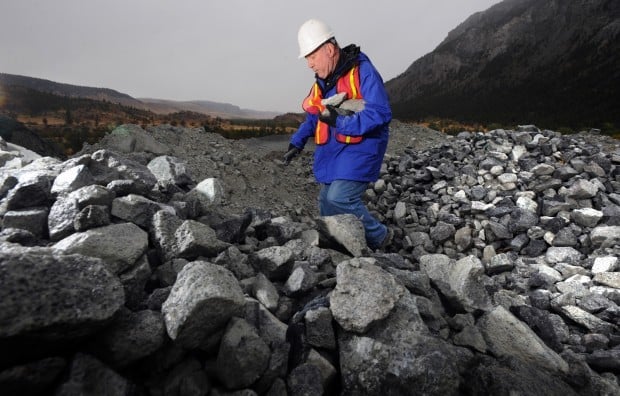 USGS project geologist Doug Stoeser looks through a huge pile of waste rock from the Stillwater Mine in Nye Wednesday afternoon. Stoeser is working in conjunction with NASA to find the perfect combination of minerals from mine waste to closely simulate a lunar surface to prepare for future moon explorations. 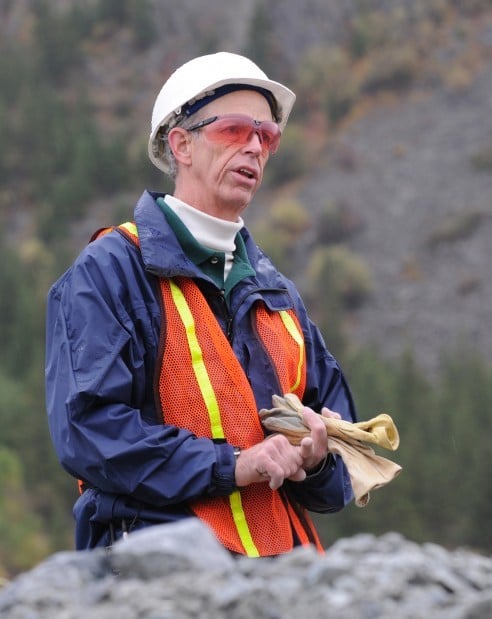 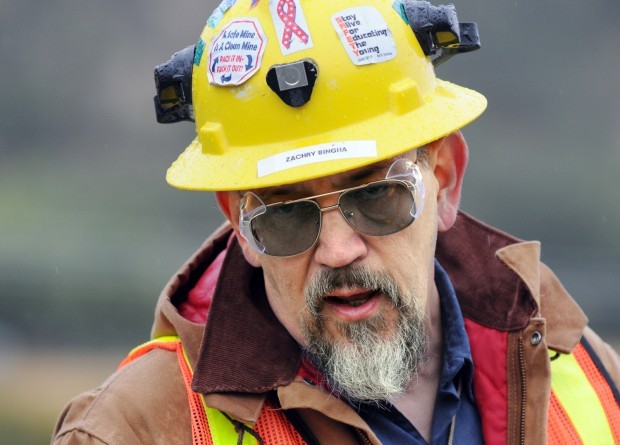 NASA geologist Doug Rickman explains the importance of closely simulating a lunar surface so engineers can determine how equipment, such as drill bits, will work in the environment. 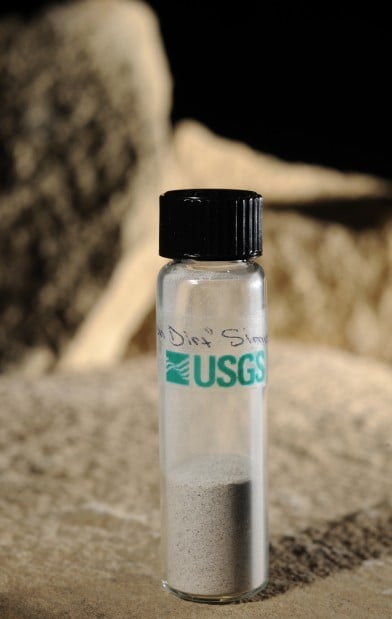 A vile holds a sample of the "Moon Dirt Simulant."
CLAIR JOHNSON Of The Gazette Staff

NYE - The piles of waste rock from the Stillwater Mine look like ordinary rocks. But like the rare platinum group metals found in the underground mine near here, the mine's geology also contains rocks with an unusual combination of minerals and chemistry that resembles lunar dirt.

This week, scientists from NASA and the U.S. Geological Survey collected rock samples for processing into a fine gray powder that is very similar to moon dirt. NASA plans to use the simulated moon dirt to test new technology that would be used in a permanent lunar station.

NASA wants to build a station, probably at the moon's southern pole, where astronauts would live and work and provide support for space explorations.

Doug Rickman, NASA's project scientist from the Marshall Space Flight Center in Huntsville, Ala., said the Apollo moon missions brought back 800 to 900 pounds of the material called regolith. But NASA needs much more regolith for testing purposes.

Regolith means "broken rock'' and is everywhere, Rickman said, pointing to rock outcrops along the mountain side. He doesn't like to call the lunar material "soil'' because it gives people the false idea that plants could grow in it.

The minerals that comprise regolith can be found in lots of places, Rickman said, "but finding them together is much rarer.''

"They're good at catching their own mistakes,'' Rickman said. That's important when doing something new, he added.

Stephen Wilson, a USGS research chemist from Denver, said the agency knew where to find the material NASA sought. "Oh, go to the Stillwater,'' he said. "The Stillwater is one of the unique places that can do it. What is waste rock for the Stillwater mine is exactly what we want.''

USGS began collecting the rock samples for testing in 2007 and so far has made five trips to the mine site. Wilson said it took two trips to find an outcrop -"a big block of really great rock''- that appears to have a higher grade of minerals. Another source of the regolith material is in the waste rock dug from the mine to get to the platinum-bearing ore.

So far, USGS has collected 20 tons of Stillwater rocks and has processed 4 tons into regolith in Denver, Wilson said. The project is in the early phase, during which USGS is sampling and testing the rock for quality and consistency and to learn "what will and what won't work,'' he said.

While artificial regolith has been made before, the new material is "unprecedented'' in its complexity and similarity to the regolith found at moon's southern pole, USGS said.

The material will be used to test technology that would be used in a lunar station. The technology includes constructing building supplies from lunar material, reducing the health effects of dust, extracting oxygen from regolith to make water and air and making rocket fuel for space travel.

If all goes well, USGS could process more than 100 tons of regolith material for NASA in the next five to 10 years, Wilson said.

On Wednesday, scientists collected 50 buckets of waste rock samples from 50-ton piles. The bucket samples will be ground up and tested to determine the average mineral content for future processing, Wilson said.

The Stillwater Mine Co. has been "incredibly helpful,'' Rickman said. He estimated the company has contributed $50,000 to $100,000 in resources to the project. "They want to help us get back to the moon,'' he said.

And why go back to the moon? Establishing a lunar base free of the Earth's gravity could help turn the moon into a kind of gas station and allow for exploration anywhere, Rickman said.

"It would completely change things," Rickman said. "I think it's worthwhile to invest in the future.''

Where does Donald Trump stand now?

Stillwater Mining Co. may be up for sale

USGS project geologist Doug Stoeser looks through a huge pile of waste rock from the Stillwater Mine in Nye Wednesday afternoon. Stoeser is working in conjunction with NASA to find the perfect combination of minerals from mine waste to closely simulate a lunar surface to prepare for future moon explorations.

NASA geologist Doug Rickman explains the importance of closely simulating a lunar surface so engineers can determine how equipment, such as drill bits, will work in the environment.

A vile holds a sample of the "Moon Dirt Simulant."
© Copyright 2021 Billings Gazette, 401 N Broadway Billings, MT | Terms of Use | Privacy Policy
Powered by BLOX Content Management System from TownNews.com.
You don't have any notifications.