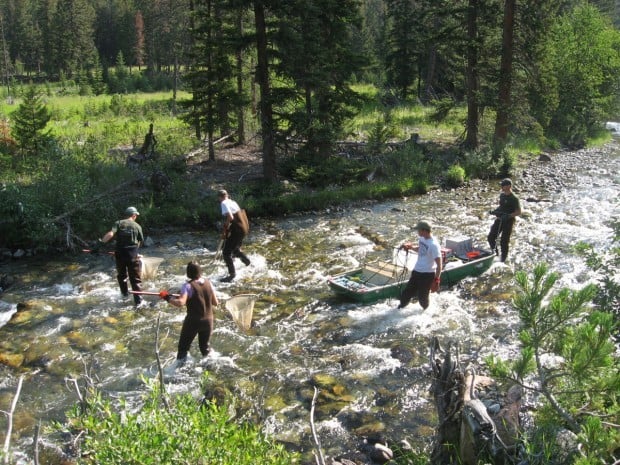 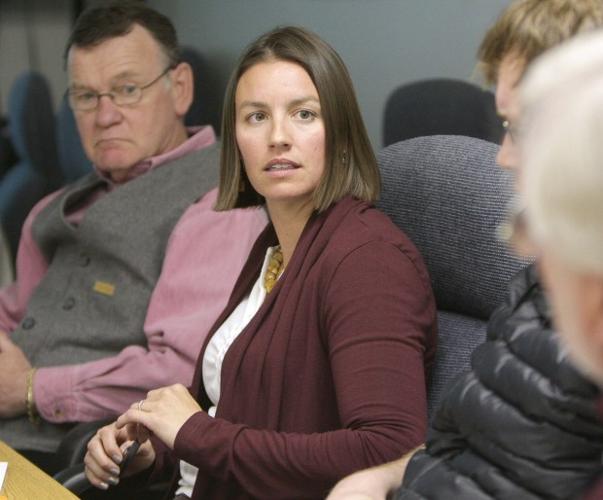 Environmental engineer Sarah Zuzulock is a third-party consultant who was hired to help with the water monitoring program. Zuzulock is paid by Northern Plains, with money provided by Stillwater Mining Co. Since coming on board, she has trained dozens of community volunteers to assist with water and biological monitoring around both mine sites. 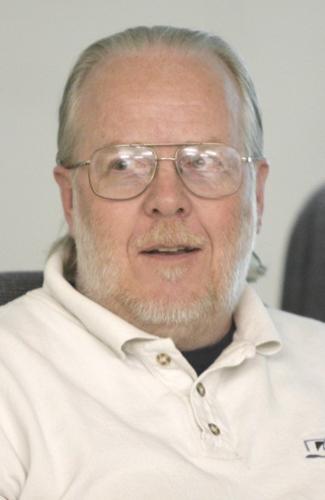 Norm Tjeltbeit, Chair of the Stillwater Protective Association, attends a Stillwater Mine Good Neighbors Agreement meeting at Columbus May 12, 2010. 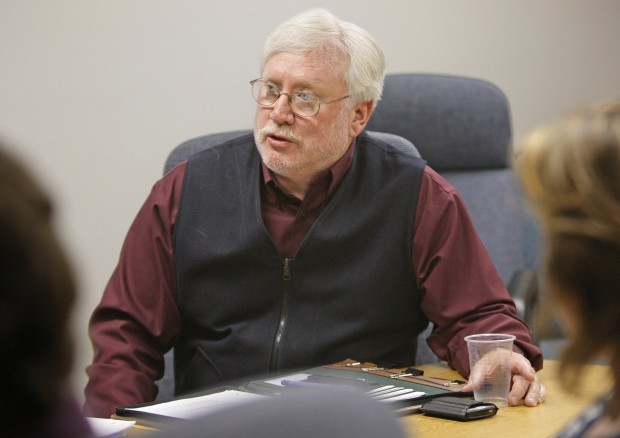 Bruce Gilbert, Stillwater Mine Director Environmental and Government Affairs attends a Stillwater Mine Good Neighbors Agreement meeting at Columbus May 12, 2010.
LINDA HALSTEAD-ACHARYA Of The Gazette Staff

In the blackness of 3:30 a.m., the miners climbing onto a bus at Sam’s Club are not likely thinking about the Good Neighbor Agreement.

But it was the groundbreaking pact that spawned the Stillwater Mining Co. busing program, which today carries hundreds of Stillwater employees from communities across south-central Montana to their jobs at Nye and the East Boulder.

This month, the Good Neighbor Agreement marks its 10th anniversary. The parties involved — Stillwater Mining Co. and three local resource councils — see cause to celebrate the agreement that strives to protect the environment while encouraging economic development.

“Agreements come and agreements go,” said Bruce Gilbert, director of environmental and governmental affairs at Stillwater. “The proof is whether they last. To my mind, we’ve silenced many of the skeptics.”

Gilbert himself was a skeptic 11 years ago when he sat at the table during negotiations. And he wasn’t the only one. Members of today’s two oversight committees include a number of the same faces that forged the original agreement. They say the test of time has strengthened their bonds.

“People on all sides have tried to put themselves in the other person’s shoes,” said Norm Tjeltveit, committee member and chair of the Stillwater Protective Association, the Stillwater Valley-based resource council. “To me, that has done nothing but enhance other’s points of view.”

In the 10 years since its implementation, the agreement has withstood a major recession, the buyout of Stillwater Mining Co. by a Russian firm and a dramatic drop in price of precious metals.

And the decade of cooperation has not been without internal struggles.

“There have been some really hard-fought battles and bitter disagreements, but it’s all happened transparently,” said Jerry Iverson, a committee member and member of the Big Timber-based Cottonwood Resource Council, which joined forces with Northern Plains Resource Council and the SPA to negotiate the original agreement with the mine.

Though the Good Neighbor Agreement garners little attention now — “In some ways, I think we’re victims of our success, it works so smoothly,” Iverson said — it established standards between mining and conservation groups that have yet to be duplicated.

“There’s nothing under the table,” Gilbert said. “They get involved in the discussions even before we submit them to the agencies. We’re just providing them information up front instead of making them dig for it.”

The list of terms goes on, including the formation of active oversight committees for each mine site and a technology committee tasked with studying the latest and best industry practices. The agreement even stipulated that Stillwater set aside nearly 4,000 acres in conservation easements and cover the costs of scientific monitoring by an independent consultant.

“We pay them (consultants) to tell those folks (council members) what we think we’ve already told them,” Gilbert said, smiling.

In addition to its litany of environmental safeguards, the agreement guarantees certain provisions for the life of the mine, regardless of changes in ownership, management or council membership. Finally, the agreement offers a structure for conflict resolution, which is cited by many as one of the document’s strengths.

“It’s like a marriage,” Tjeltveit said. “You find a way to make it work.”

Ten years ago, when mine management and council members first sat down together the atmosphere was anything but like a marriage. Tensions were high, remembers Arleen Boyd, then-chair of the SPA. There was distrust and sometimes hostility that escalated into yelling, fists slammed on the table and participants walking out of discussions.

Fueled by a history of conflict, including legal battles at both mine sites, it’s no surprise the divide was deep. The litigation had stalled the mine’s plans and offered leverage for the resource councils, but left neither side satisfied.

“That taught us a lot about going to court,” Iverson said. “It’s uncomfortable, hostile and really unpredictable. It led us and the company to wonder if there was not a better way to go forward.”

Eventually the councils joined forces and Stillwater agreed to discussions. Boyd, who had recently retired from the corporate world, was confident the mine could do more than meet minimum requirements.

“Our mantra, talking with them, became ‘If you can afford it, you can do it right’,” she said.

Talks started in spring 1999, and after hundreds of hours of give and take during many months the parties shook hands. But the deal broke down in January 2000, when the council members walked out over the addition of confidentiality clauses to the draft agreement.

Yet, the good faith established even that early in the process eventually won out. Representatives from all parties signed the Good Neighbor Agreement on May 8, 2000.

“I think that’s why we’re so anxious to celebrate,” Gilbert said. “It almost didn’t happen.”

For the mine, the devil was in the details of implementation. With no model to follow, it took longer than anticipated to meet the agreement’s objectives.

The 2001 hiring of third-party consultant Sarah Zuzulock, a senior environmental engineer with Kuipers and Associates, advanced the crucial water monitoring program. Zuzulock is paid by Northern Plains, with money provided by Stillwater Mining Co. Since coming on board, she has trained dozens of community volunteers to assist with water and biological monitoring around both mine sites.

As an independent voice, Zuzulock continues to attend oversight meetings.

“My main focus has been the environmental aspects,” she said. “But you can’t help but get attached to it and to the people, too.”

Throughout her years of involvement, Zuzulock says the mine has never tried to sway her advice to the resource councils. She also notes that the results of the independent monitoring were consistent with what the mine was reporting.

Due to the transparency made possible through the agreement, she can speak freely about matters that concern the councils today. There are still points of contention about the mine’s plans to expand operations, she said. And members of the councils at both mine sites are keeping close track of nitrogen plumes, which originate from blasting operations.

In a paper she authored, Zuzulock cited strengths and weaknesses of the Good Neighbor Agreement.

The level of trust and communication, along with shared responsibility to maintain the area’s rural character and pristine water quality were among the positives.

On the down side, she noted the difficulty in maintaining community involvement.

“The community thinks the Good Neighbor Agreement keeps everything under control. It may make the community more complacent,” she said. “The same point could be said for the regulatory agencies. Over the years, there seems to be less concern.”

Agreement with a bite

The Good Neighbor Agreement between Stillwater Mining and the three resource councils is not the first to be referred to using the same terminology. What sets it apart, participants say, is its broad scope and the fact that it’s legally binding.

“Most are handshake agreements and don’t have the teeth,” Zuzulock said.

Gilbert has given industry presentations on Stillwater’s experience but can only cite one mine — a gold mine in Washington state — that has followed its lead. In the last few years, however, he’s had more calls about the agreement than the first eight years combined.

“The Good Neighbor Agreement scares people in industry,” he said. “They wonder ‘How are we going to implement something like that, and where is the incentive?’ ”

Considering the cost — Stillwater has invested several million dollars to date — the question bears asking. Although none of the local parties could ever hope to quantify the benefits with a dollar value, Gilbert has no qualms that such an agreement is the best way to go.

“The reality is, if you can spend more time making progress in the permitting process, in new technologies and new treatment efficiencies, that’s money well spent,” Gilbert said. “It would be great if it becomes the norm. In my mind, it’s the right way to do business.”

Although the 10th anniversary of the Good Neighbor Agreement officially took place earlier this month, festivities, including picnics sponsored by the resource councils and Stillwater Mining Co., are scheduled for later this summer.

Two “middle aged dudes who made a drunken mistake a long time ago” dropped off a sign they had stolen from the restaurant two decades ago.

Environmental engineer Sarah Zuzulock is a third-party consultant who was hired to help with the water monitoring program. Zuzulock is paid by Northern Plains, with money provided by Stillwater Mining Co. Since coming on board, she has trained dozens of community volunteers to assist with water and biological monitoring around both mine sites.

Norm Tjeltbeit, Chair of the Stillwater Protective Association, attends a Stillwater Mine Good Neighbors Agreement meeting at Columbus May 12, 2010.

Bruce Gilbert, Stillwater Mine Director Environmental and Government Affairs attends a Stillwater Mine Good Neighbors Agreement meeting at Columbus May 12, 2010.
© Copyright 2022 Billings Gazette, 401 N Broadway Billings, MT 59102 | Terms of Use | Privacy Policy | Do Not Sell My Info | Cookie Preferences
Powered by BLOX Content Management System from TownNews.com.
You don't have any notifications.