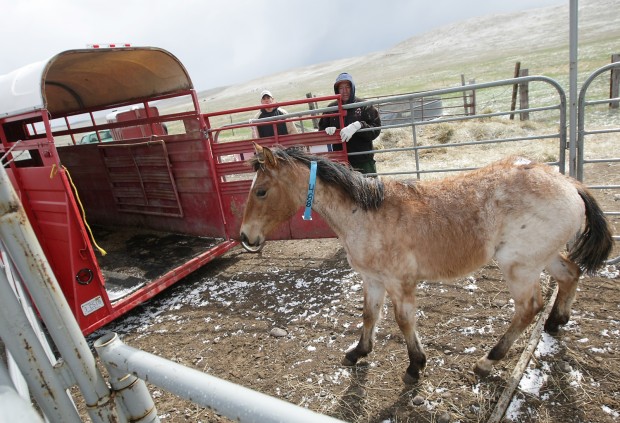 A horse tagged #488 is loaded into a trailer on Sunday, April 3, 2011 at a horse auction at the former Leachman Ranch. 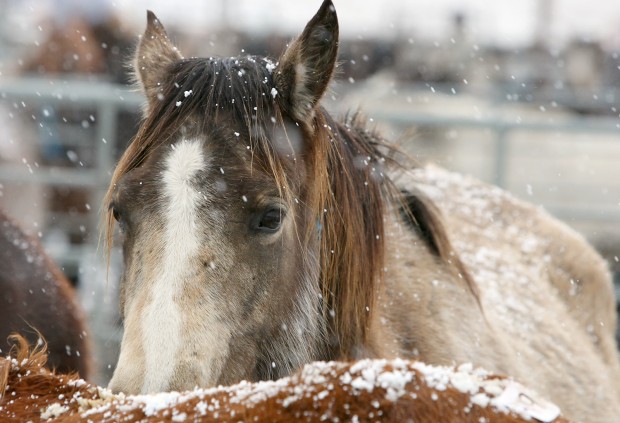 A horse, covered in snow, waits in a holding pen after being auction off at the former Leachman Ranch in 2011. 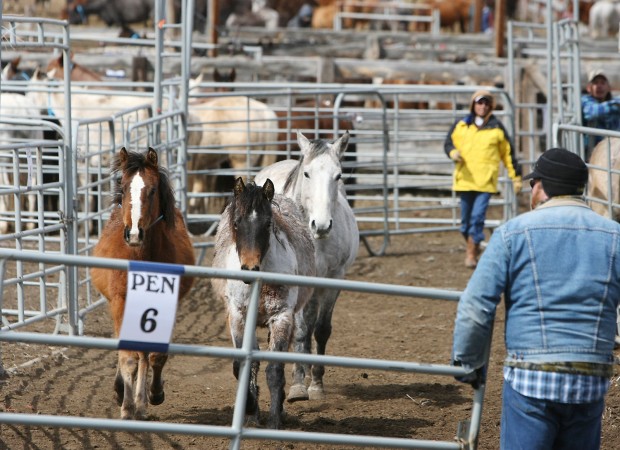 Three horses are sent to a holding pen after being purchased during the second day of a horse auction at the former Leachman Ranch on Sunday, April 3, 2011.

﻿Last weekend’s sale of horses seized for trespassing on the Crow Reservation drew buyers from across the country and Canada who spent $380,365 on 804 Leachman quarter horses.

Every Leachman horse run through the sales ring sold. The other 25 out of a total 829 horses got swept up in the Crow Tribe roundup and were reclaimed by their owners.

Absarokee auctioneer Rick Young said he has never sold more than 100 horses at one time.

“I thought it was awesome, just a very, very well-run deal, and I was well-pleased with the prices the horses brought, all things considered,” he said.

This has been called the largest sale of trespassing livestock in the history of the Bureau of Indian Affairs.

The BIA confiscated the horses after giving the owner, Jim Leachman of Billings, a notice last October and another last month that his horses were trespassing on tribal lands. He failed to pay the bills to reclaim his horses, and that cleared the way for this sale on the Home Place ranch 16 miles east of Billings.

International publicity and Internet chatter about the horses, many rescued from starvation last winter, probably pushed prices higher than they might have been, Young said.

“This was such a unique situation that normal market values may have varied considerably due to outside circumstances,” he said. “There were a lot of people this weekend trying to save the horses.”

Crow Agency BIA Superintendent Vianna Stewart said people will be sorting and loading horses until Thursday or Friday, so she won’t be able to total up the costs of the operation until the end of this week.

“We don’t know if there is money left over yet. If so, he (Leachman) has creditors who have liens,” she said.

Yellowstone County Sheriff Mike Linder was there both days with five department members.

“Our office was just basically there for security. There was a lot of money out there,” the sheriff said.

Shepherd veterinarian Jeff Peila drew blood from 400 horses needing papers to travel out of state or into Canada. The Canadian horses will be loaded last because they have to get health certificates signed in Helena, which takes longer, he said.

Jim Glenn of Sidney, Iowa, bought six horses. Prices for horses across the United States are depressed, but not at this sale, he said.

“I just wanted some of the horses. The Jim Leachman horses are really great horses,” he said.

Leachman is scheduled to appear in Justice Court again April 12 on animal cruelty charges. Yellowstone County Attorney Scott Twito has charged him with 14 counts, seven primary and seven alternative, of misdemeanor animal cruelty. Leachman has pleaded not guilty on all counts and faces a jury trial on June 3.

Wyola rancher Delano White Clay was hauling his yearling filly home on Monday after waiting four hours on Sunday when the load-out operation was backed up with too many horses.

And at least one buyer was saddened by failing to buy a favorite mare.

So, Charles Fochs of Wisconsin Dells, Wis., is trying to find her new owner and offer a better price. Despite an empty trailer heading home, the 1,058-mile trip was worth it, he said.

“We heard this would be one of the largest private horse auctions ever and that you’d probably never see another one like it again,” he said. “We decided we wanted to see that part of history.”

-- 25 horses swept up on the roundup were reclaimed by their owners.

-- $555 average price for the younger stallions.

More than 800 quarter horses are auctioned off in a sale on a ranch south of Billings on Saturday.

Planning started in earnest Tuesday to set up for this weekend's sale of as many as 829 horses on a ranch east of Billings.

﻿James Leachman, the Billings-area rancher charged with animal abuse for alleged mistreatment of a large herd of horses, has been denied a pub…

A 2nd auction of Leachman horses is set near Poplar

Two years ago, the Crow Tribe auctioned off more than 800 of James Leachman's horses on a ranch east of Billings. A similar scene will play ou…

Leachman gets public defender, for now, on animal abuse charges

A horse tagged #488 is loaded into a trailer on Sunday, April 3, 2011 at a horse auction at the former Leachman Ranch.

A horse, covered in snow, waits in a holding pen after being auction off at the former Leachman Ranch in 2011.

Three horses are sent to a holding pen after being purchased during the second day of a horse auction at the former Leachman Ranch on Sunday, April 3, 2011.
© Copyright 2021 Billings Gazette, 401 N Broadway Billings, MT | Terms of Use | Privacy Policy
Powered by BLOX Content Management System from TownNews.com.
You don't have any notifications.