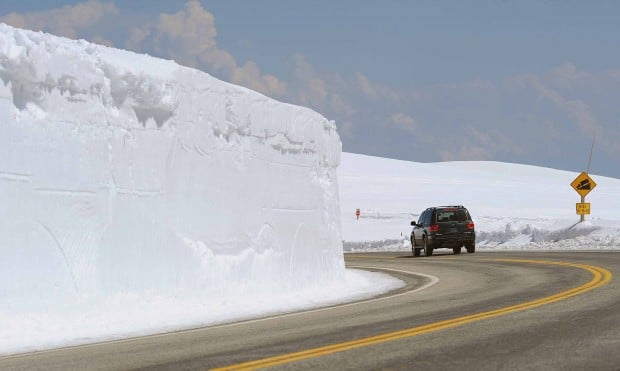 A vehicle winds through deep, white snow on U.S. Highway 212 on the Montana side of the Beartooth Pass on June 2. The highway is now completely open. 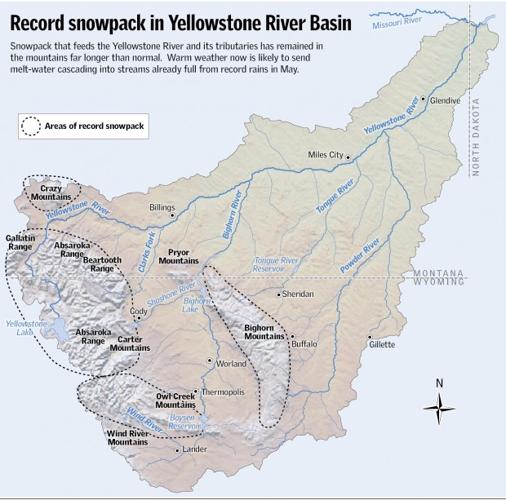 By LORNA THACKERAY Of The Gazette Staff

Almost on cue, big rainy storm systems that saturated Eastern Montana in May are transitioning into a warmer, drier weather pattern fit for spring.

But an abominable snowpack lurking in the mountains will make it a wet season with high water likely through July.

Most Montana river basins had well above normal snowpack this winter and spring, and about 85 percent of it is still up there, according to Scott Oviatt, water supply specialist for the U.S. Natural Resources Conservation Service.

It should have started melting out a month ago, and rivers would normally be approaching their seasonal crests about now. This year, however, hasn't conformed to any pattern that could be called normal.

"Many sites are just now reaching their winter peaks in the last two weeks," Oviatt said. "The Bighorns and eastern Beartooths were still accumulating snow with that last storm."

Statewide snowpack stands at 257 percent of average for this time of year, and some basins are much higher. The lower Yellowstone, the stretch of the river between Custer and the Missouri River, is at 308 percent of normal.

Those numbers do not represent peak snowpack for the season but reflect the fact that very little of it has melted. Because the pack has held so long, it has become dangerous. Chances of a slow, gradual melt are significantly reduced now that Montana has entered a season where sudden, prolonged warm weather could send melt water cascading into already bloated streams.

Tom Frieders, warnings coordination meteorologist for the National Weather Service in Billings, said there is still hope that the snowpack could melt at a rate that won't overwhelm the state's waterways.

"Just a minor shift in the weather pattern, with colder air heading south, could limit how fast it melts," he said. "But if we get three, four, five days in a row of 80-degree weather, we're going to see a lot of water come out of the mountains."

So far, mountain temperatures have remained below freezing at night.

The long-term forecast suggests cooler and wetter-than-normal weather in June. Cooler would be good, but wetter could mean more snow at higher elevations, Oviatt said.

The pack is ripe and ready to melt, he said. For the most part, it has reached a uniform temperature of 32 degrees. It won't take much to get it moving now.

Staggering amounts of snow water remain locked in the pack. In the Musselshell Basin, which has 386 percent of normal snowpack for this time of year, the Snotel site at Crystal Lake reports 15.7 inches of snow water. Normally, just 0.7 inch would be left to melt.

In the upper Yellowstone Basin, the Cole Creek Snotel near Red Lodge would have 11 inches of snow water left in a normal year. This year it has 25.5 inches, or 232 percent of normal. The Two Ocean Plateau Snotel shows 54.3 inches to go. Normally, just 25.2 inches would be left.

On the lower Yellowstone, the Snotel at Bald Mountain shows 41.1 inches left. Normally it would have 16.7 inches. Cloud Peak Reservoir's Snotel shows 27.7 inches of snow water still tied up in snowpack. Normal would be 7.7 inches.

"The main point of emphasis is that this is such a unique year," Oviatt said. "None of us can recall a year like this. We've seen high snowpack years before, but none where it's sitting there this long."

Lorna Thackeray can be reached at 657-1314 or lthackeray@billingsgazette.com

﻿Even today, carving a ribbon of pavement up the sheer cliff rising out of the Rock Creek Valley seems an audacious undertaking.

﻿RED LODGE — In a typical year, motorists driving to the top of the Beartooth Pass when it opens on Memorial Day weekend wouldn’t see as much …

A vehicle winds through deep, white snow on U.S. Highway 212 on the Montana side of the Beartooth Pass on June 2. The highway is now completely open.