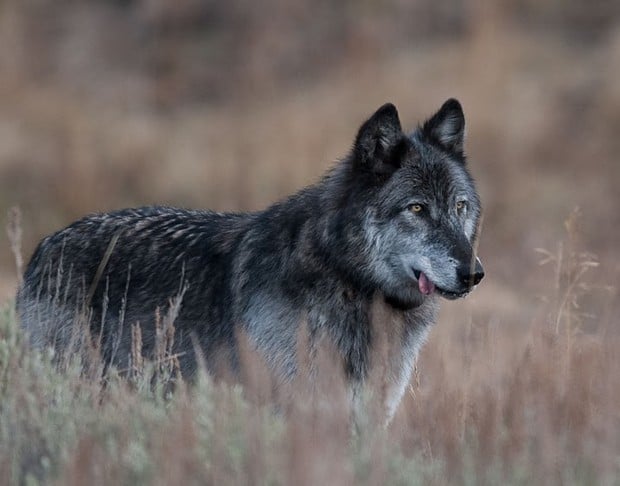 A lone female wolf pauses with its tongue hanging out after hearing a nearby pack howl. 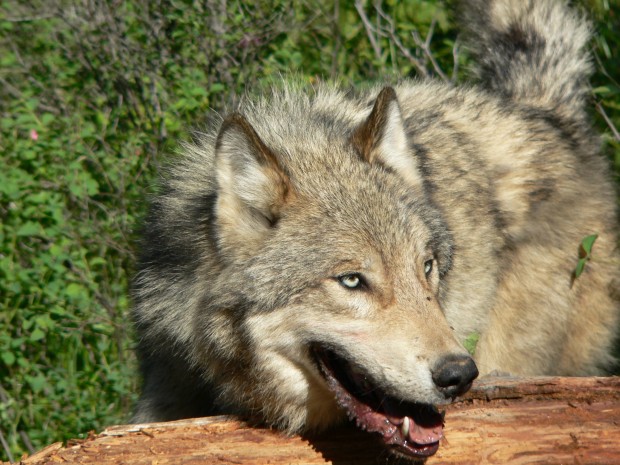 The U.S. Department of Agriculture reports cattle losses to wolves in Wyoming are considerably lower than losses in Montana and Idaho, states where wolves were recently delisted. Wyoming would like its wolves delisted, also.
Tom Lutey

As Wyoming fights to join Montana and Idaho in getting its gray wolves removed from the endangered species list, a new report indicates that its cattle have fared better with the predator.

The U.S. Department of Agriculture last week reported that the number of cattle killed in Wyoming by wolves was actually decreasing while kills in neighboring Montana and Idaho had risen sharply.

Five years earlier, Montana and Idaho's losses were in line with Wyoming's, but as wolf populations in those states grew, so did the wolf toll on cattle. Wyoming saw a slight decline.

Outfitters have complained that elk populations around Yellowstone National Park have been dramatically thinned by wolves.

However, wolf advocates say attention to livestock kills in all three states is misguided. Weather, infection and other causes were the biggest killers of cattle in all three states, with wolves accounting for a very small percentage of the deaths. Nationwide, the carnivore predators of all species, including dogs, accounted for less than 1 percent of the cattle kills.

"Wolves are really way down the list as an insignificant factor killing livestock," said Michael Robinson, of the Center for Biological Diversity.

Robinson argues that not only are wolves a small source of cattle kills, but they're also a source for which ranchers are fully compensated. Ranchers are paid for cattle killed by wolves, even when cattle have been put out to pasture on public land where wolves are known to exist.

Bodner said wolves have killed more cattle in Montana and Idaho because in those states there are more cattle occupying areas where wolves are located.

Wolf populations in Montana and Idaho could decline this year as those states begin managing wolves no longer listed as endangered. Montana and Idaho succeeded in getting wolves delisted last month after Sen. Jon Tester, D-Mont., and Rep. Mike Simpson, R-Idaho, inserted the wolf delisting language into the 2011 appropriations bill.

It was a bill Congress had to pass in order to avoid a government shutdown. The inserted language didn't include Wyoming, which now seeks its own congressional fix.

Once hunted to extinction in the West, wolves were reintroduced to the region in the 1990s. An estimated 1,200 wolves now live in Montana and Idaho. Wyoming's population is believed to be 343, according to the U.S. Fish and Wildlife service.

Both Montana and Idaho plan wolf hunts this year. Montana would like hunters to kill 220 gray wolves. Idaho could set its quota by August. Meantime, Idaho has already sanctioned two wolf kills to curb wildlife and pet deaths associated with wolves. Sheriff's deputies around the mountain community of Elk City, have been authorized to kill wolves under disaster emergency rules.

Wolves weren't the only predator cause listed in the USDA report issued last week. Coyotes were credited for roughly 5 percent of Montana's adult cattle lost to predators. Coyotes accounted for nearly 47 percent of the state's calves killed by predators.

John Steuber, director of U.S. Wildlife Services for Montana said coyotes have benefited by living in areas occupied by gray wolves on the endangered species list. That's because poisoned bait and snares cannot be used against coyotes wherever endangered species, like wolves or grizzly bears, might be killed by mistake.

When ranchers want to know which predator killed their livestock, they call Steuber's Billings office. His staff will investigate predator damage scenes to determine the culprit.

The U.S. Department of Fish and Wildlife fingered black bears for 245 destroyed bee colonies last year. Ravens for pecking the eyes out of 19 kid goats. Grizzly bears for killing 10 cows, six calves, 24 sheep and a llama.

Wolves were the suspect in the deaths of 61 cows, 378 calves, three guard dogs and two herd dogs investigated by U.S. Wildlife, Steuber said. But coyotes were a force.

A 'Snow Moon' may be the reason you're having trouble sleeping

A 'Snow Moon' may be the reason you're having trouble sleeping

A lone female wolf pauses with its tongue hanging out after hearing a nearby pack howl.

The U.S. Department of Agriculture reports cattle losses to wolves in Wyoming are considerably lower than losses in Montana and Idaho, states where wolves were recently delisted. Wyoming would like its wolves delisted, also.
© Copyright 2021 Billings Gazette, 401 N Broadway Billings, MT | Terms of Use | Privacy Policy
Powered by BLOX Content Management System from TownNews.com.
You don't have any notifications.