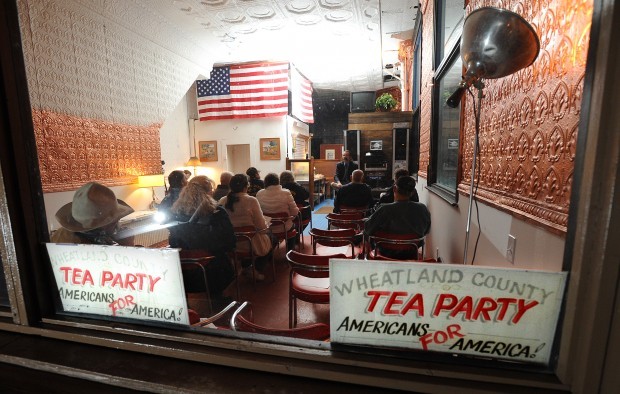 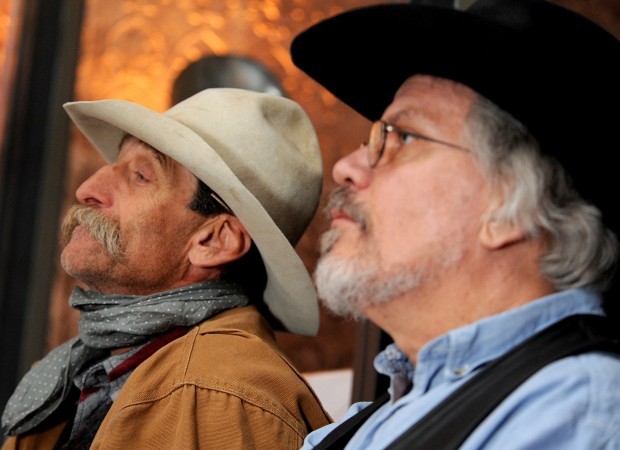 HARLOWTON — In this sleepy farm town of 948 people, the light in the windows of the old bank building the Tea Party calls home are the only ones burning for several blocks.

There are as many people gathered inside as there are patrons at the Sportsman’s Bar and Steakhouse a half-mile to the east. And that’s saying something because there’s playoff baseball, hot food and alcohol at the bar. The menu at the bank consists of cold government talk, coffee in plastic-foam cups and, as the fall chill settles in, no heat.

But Philip Wilsman gets the meeting going with the Pledge of Allegiance and a progress report that warms the attendees. The group that hasn’t existed for six months has been drawing as many as 45 people to its meetings. And it has taken on the role of local government watchdog, something it believes Wheatland County desperately needed.

The group is leaning on the county to return unspent law enforcment funds collected from Harlowton. County Commissioners have agreed to discuss the request.

Heads in the group begin nodding in approval, and as the report goes on, it becomes the clear that Tea Party groups in rural areas are doing something their city cousin’s have struggled with: They’ve affected the way their local governments operate.

On this night the assembly is a patchwork quilt of community newcomers, farmers, townies and even a cowboy armed with six guns.

The group credits the Central Montana Tea Party in Lewistown for helping to defeat a $10.7 million bond levy for a new middle school. It also recognized the Oath Keepers and Sweet Grass County Patriots for scuttling a public park in Big Timber.

The Patriots are a group based on the idea that Americans are “losing our constitutional government.” The Oath Keepers is a conservative group of current and retired members of the military, law enforcement or firefighters concerned with what they see as an overreaching government. Only members of those public-servant groups are eligible for full membership. They are not part of the Tea Party.

Dick Erlandson won’t go as far as Wilsman in crediting the Central Montana Tea Party for defeating the middle school bond issue last month in Lewistown. A founder of the Tea Party there, Erlandson said his group simply made an effort to get information out the voters by organizing a public forum that drew more than 100 people.

“Our purpose is to unite not divide,” Erlandson said. “We presented the pros and cons. They wanted to do another school here, and we needed one like you know what. It got defeated almost 3 to 1. We’re interested in better education, but if we did the school, then we’d have the budget tied up and couldn’t get better teachers.”

The Central Montana Tea Party has the biggest roadside billboard for hundreds of miles in any direction. It’s a 16-by-4-foot, red, white and blue sign right on the main drag that proclaims “The Tea Party: Americans for America.”

Politically, Erlandson’s group has attracted candidates from both parties to its political forums, where the crowd exposure goes beyond what candidates experience in a political debate. At a Central Montana Tea Party forum, the candidates sit at the front of the room and field questions from the audience.

The forum was a learning experience for Kurt Myllymaki, a 26-year-old Democrat from Stanford taking a run at the state House.

“I had the comfort of knowing I wasn’t going to lose many votes,” Myllymaki joked.

In a field of five candidates for the various offices, Myllymaki was the only Democrat. He was little worried about the questions going into the forum, but they weren’t that hard, though he says he received more of a drilling than the other candidates. But, in a small community when a sizable group requests your presence, you go.

Erlandson said the Central Montana Tea Party has the potential to grow.

But in Fergus County, Paul won, as he did in Judith Basin County next door and Blaine County to the north. The Atlantic magazine crowned Paul “the brain of the Tea Party” earlier this year as it became clear that the Tea Party’s concern of unchecked federal spending and strict constitutionalism and attention to pre-Depression government history lined up well with Paul’s beliefs.

But Tea Party groups at the rural levels have also made local government matters bread-and-butter issues.

In Harlowton, Wilsman and the other Tea Parties sort through the issues on the November ballot, sometimes disagreeing over whether certain constitutional initiatives are good or bad for the community. When they move on to local issues, everyone tunes in a little more.

This Tea Party group didn’t form on April 15, 2009, as so many around the country did. It formed just a few months ago after the June primary. Tea parties working the polls as election observers saw behavior they considered illegal. County election officials began counting ballots around noon, while people were still voting. Then an election worker began making phone calls, which the Tea Partiers suspect was to relay results. Results usually aren’t announced to anyone before the polls close.

There was a heated law enforcement race between current Wheatland County Sheriff James Rosenberg and Everett Misner. Rosenberg’s wife is serving time in federal prison for stealing public funds, and the issue is playing against Rosenberg’s bid for re-election.

Wheatland County elections official Mary Miller said she doesn’t think the Tea Party members observed what they think they did. Ballots were counted before voting stopped, which Miller doesn’t have a problem with. But the election official making phone calls was on the phone with Miller talking about a ballot-marking machine that wasn’t functioning well, she said.

The county is changing they way it counts votes this election to address the Tea Party’s concerns, Miller said. All vote counting will take place at the courthouse instead of at precincts where the public votes. Proctors will be assigned to the ballot counters, who won’t be allowed to even go to the bathroom without someone in tow to make sure no information is being shared with the outside world.

“That’s what we’ve tried to do, and hopefully it will help,” Miller said.