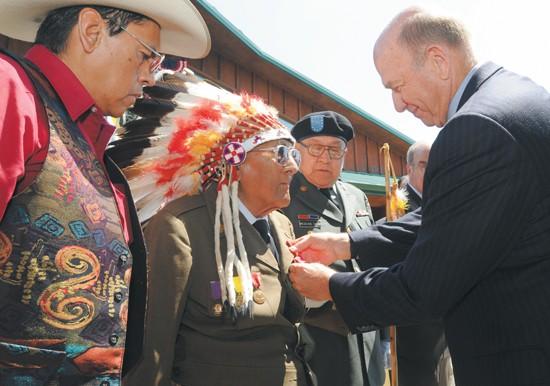 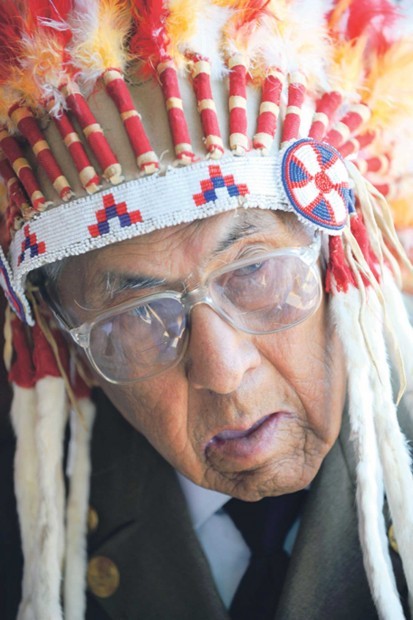 Crow historian Joe Medicine Crow listens to speakers during his ceremony to receive the Bronze Star in June 2008.
LORNA THACKERAY Of The Gazette Staff

Crow tribal historian Joe Medicine Crow has received many honors in his long and illustrious life, but none can top the one President Barack Obama will bestow on him at the White House on Aug. 12.

The 96-year-old author, scholar and World War II veteran is among 16 people selected to receive the 2009 Presidential Medal of Freedom, the nation's highest civilian honor.

"Obviously, I am quite surprised that I was selected for such a high and distinguished award," Medicine Crow said through a spokesman, Christopher Kortlander of Garryowen. "I am humbled and honored to join the ranks of the renowned citizens who have received this medal over the last 62 years."

In announcing the recipients Thursday, a White House press release said Medicine Crow's "contributions to the preservation of the culture and history of the First Americans are matched only by his importance as a role model to young Native Americans across the country."

"You know that President Obama is my clan nephew now," Medicine Crow noted. "I met him here on the Crow Reservation when he was adopted by the parents of our current chairman, Mary and Hartford "Sonny" Black Eagle."

Obama was campaigning for president last year when he made a stop on the Crow Reservation.

"I sang Senator Obama a praise song, and now I know the song worked. Now that Barack Obama is the president of the United States, he is entitled to the victory song that was given to me by my grandfather, White Man Runs Him, who was General Custer's scout."

Medicine Crow gained his warrior chief status while fighting in Europe during World War II. Last year, he was awarded the Bronze Star by the U.S. Army for his war service. At the same time, the government of France made him a knight of the French Legion of Honor.

Born in 1913, Medicine Crow was the first of his tribe to earn a master's degree, which he received from the University of Southern California in 1939. The title of his thesis was "The Effects of European Culture Contacts upon the Economic, Social and Religious Life of the Crow Indians."

He was working on his doctoral dissertation at USC when World War II ended his academic career. USC awarded him an honorary doctorate in 2003. He also received honorary doctorates from the University of Montana and Rocky Mountain College.

Over the years, Medicine Crow has written several books on Crow history and culture, including his latest, "Counting Coups," published by National Geographic, Kortlander said.

Kortlander, founder of the Custer Battlefield Museum at Garryowen and a longtime friend of Medicine Crow, said he will accompany the Crow honoree to Washington next month.

"He is approaching 97 years of age and continues to be mentally sharp as an arrow," Kortlander said. "I am so proud for Joe that President Obama recognized him with this high honor."

Medicine Crow was nominated for the Medal of Freedom by Sen. Jon Tester, D-Mont., and retired Sen. Alan Simpson, R-Wyo., in March 2008.

"Anyone who's had the honor of meeting Joe knows he's an American hero," Tester, a member of the Senate Veterans' Affairs Committee, said Thursday. "Joe earned the Presidential Medal of Freedom a long time ago. His lifetime of hard work, his devotion to the Crow Tribe and his dedication to this country will always be remembered."

Tester said he plans to attend the ceremony.

The other 15 Medal of Freedom recipients

HARDIN - The Big Horn County Historical Society will hold a book signing and holiday open house from 2 to 4 p.m. Saturday.

The oldest living Crow Indian veteran has been nominated for the Presidential Medal of Freedom.

Crow historian Joe Medicine Crow listens to speakers during his ceremony to receive the Bronze Star in June 2008.
© Copyright 2021 Billings Gazette, 401 N Broadway Billings, MT | Terms of Use | Privacy Policy
Powered by BLOX Content Management System from TownNews.com.
You don't have any notifications.