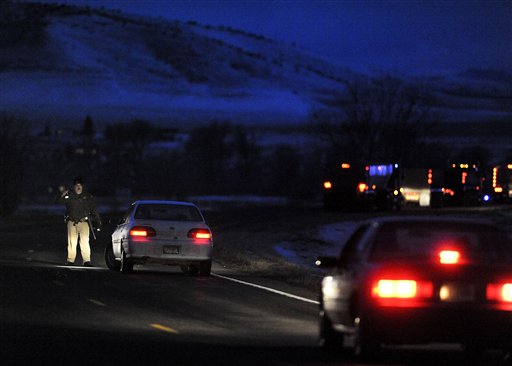 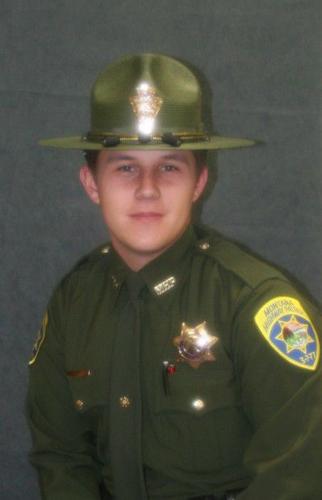 Moments before he was gunned down in a shootout, a young Montana Highway Patrol officer came upon a running pickup truck that was parked in the middle of a rural road, authorities said Thursday.

Trooper David DeLaittre called in to the dispatcher before going to investigate Wednesday afternoon. That was the last anybody heard from the 23-year-old officer.

When a police officer from the nearby town of Three Forks arrived, he found DeLaittre alone, shot and maybe already dead. Spent rounds around DeLaittre's vehicle signaled that a shootout had taken place near the spot where three rivers join to form the Missouri River.

"There were a number of rounds fired, multiple rounds by both individuals. Trooper DeLaittre was able to return fire," Gallatin County Sheriff James Cashell said.

The body of the alleged shooter, 56-year-old Errol Brent Bouldin, was found in his truck hours later, about 35 miles north in an area that his family told authorities he liked to frequent. His cause of death had not yet been determined.

"We do believe the suspect was wounded in the exchange with Trooper DeLaittre, however, we have not confirmed that," Cashell said.

Both men were from Three Forks, a southwestern Montana town of about 1,700, though it was not immediately clear if they knew each other. It also was not clear what sparked the shootout, and Cashell said there were no witnesses.

"We may never know exactly what transpired there," Cashell said.

Bouldin's ex-wife, Debra Bouldin of Camp Verde, Ariz., told The Associated Press in a telephone interview that Bouldin had nearly died from a rattlesnake bite in 2005, and that experience changed him and left him bitter. They divorced in 2006 and she had not spoken to him since, Debra Bouldin said.

"He kind of went off the deep end," she said. "That snake bite was the change of everything."

Belgrade police Sgt. David Keen said a warrant for Bouldin's arrest was issued Dec. 3, 2009, on a contempt charge, meaning Bouldin either failed to appear in court or did not comply with a court order.

DeLaittre's death sparked a manhunt of more than 100 local, state and federal law enforcement officers that stretched into the night.

Police initially believed the gunman was on foot, but the sheriff's office later learned the shooter was Bouldin, a dog trainer, and that he was driving a 1999 green Ford F250 pickup and headed north. Cashell did not specify how authorities came across the information.

Broadwater County Sheriff Brenda Ludwig said Cashell's office tipped her deputies that Bouldin may have headed to a valley outside the town of Townsend that Bouldin's family said he frequented.

Ludwig said there was no confrontation between authorities and Bouldin, and the officers who found his pickup discovered his body inside. They would not speculate whether he died from wounds received during the shootout or otherwise.

DeLaittre was sworn in November 2008 and was one of the youngest troopers on the force, if not the youngest, Attorney General Steve Bullock said. His father had also been a trooper.

"That one of the patrol's young troopers, only 23 years old, should pay for his dedication to public service with his life is largely incomprehensible to me," Bullock said.

Seven other Montana Highway Patrol officers have died in the line of duty, two by shooting, according to the Association of Montana Troopers.

Funeral arrangements for DeLaittre were being set for sometime next week, Bullock said.

Read the latest stories about the slain trooper and suspected shooter.

Slain trooper had always dreamed of being MHP officer

The first thing that comes to Helen Fergus' mind when asked about her grandson, 23-year-old David DeLaittre, is a memory from 20 years ago.

Police searched into the night to find a man who shot and killed a Montana Highway Patrol officer, only to find him dead in his truck late Wed…

THREE FORKS — Funeral services will be held for a young Montana trooper who was killed in a shootout during a traffic stop.

BOZEMAN — A Bozeman lawmaker has introduced a bill to name a four-mile section of U.S. Highway 287 through Three Forks in honor of Montana Hig…

Highway to be named in honor of slain Montana trooper