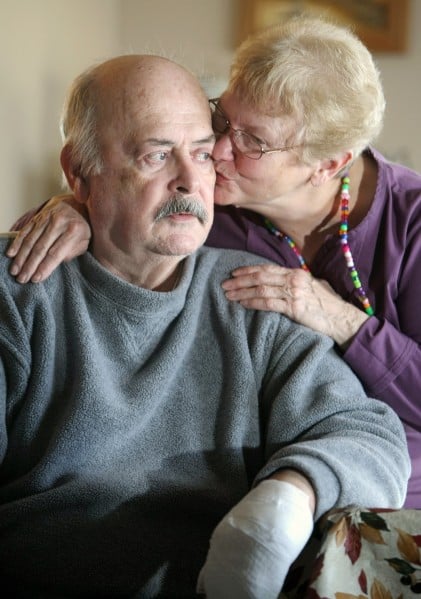 Pat Latraverse kisses her husband, Jerry, on Friday after talking about Jerry's rescue outside Big Timber on Thanksgiving Day. Jerry suffered frostbite on his hands, below, after being stranded outside his home during a blizzard. 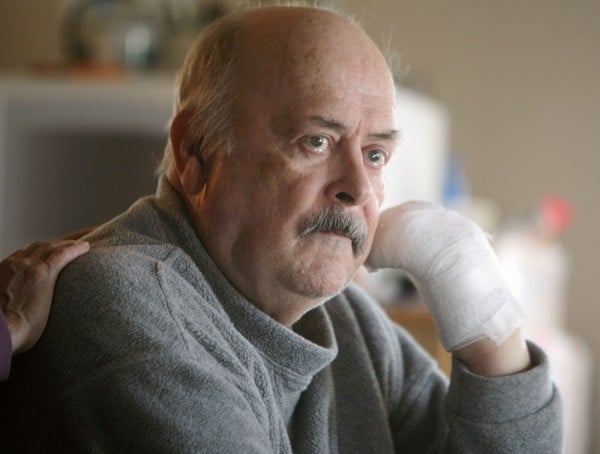 Jerry Latraverse's eyes fill with tears while talking about his Thanksgiving Day rescue on Friday in Big Timber. Jerry suffered frostbite after being stranded outside his home during blizzard conditions. 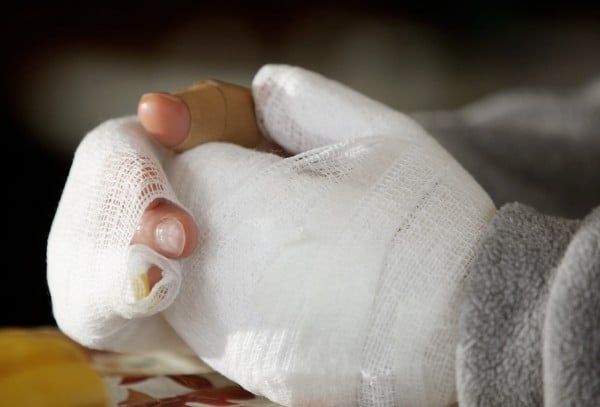 Jerry Latraverse suffered frostbite on his hands after being rescued from blizzard conditions on Thanksgiving Day near Big Timber.

Jerry Latraverse lay in a snow drift, his pants dragged down to his knees, caught on the backyard fence he'd just managed to climb, his gloves clutched in one of his hands.

It was about 8 p.m. Wednesday, the night before Thanksgiving. The wind was blowing in 70 mph gusts, and the snow was coming down fast. Just 200 feet away stood the back door of his house, lights shining brightly.

He hollered out to his wife, trying to be heard over the wind, and then he began to slip in and out of consciousness.

Latraverse, 70, is a big man. He weighs about 285 pounds and lives with his wife, Pat, in a country house along Solberg Lane, a spur off the Howie Road that leads into Big Timber. All Wednesday they had been preparing for Thanksgiving and waiting for their daughter Debbie, from Denver, to get to town for the holiday.

It seemed all week that one storm system after another had been blowing through town. It was no different on Wednesday. Solberg Lane was beginning to blow over with snow by early evening.

“Our whole road was drifting like crazy,” said J.V. Moody, the Latraverses' neighbor and a Montana Highway Patrol trooper.

Another neighbor, Kathie LoPiccolo, was watching the storm. She lives a half-mile up the lane from the Latraverse place and had a few more errands in town.

She had no desire to drive in that weather, so she strapped on her cross-country skis and headed into town with her sled to carry home some last-minute Thanksgiving groceries. Her 15-year-old son Joseph was finishing up at work and she planned to pick him up on the way back.

The trek into town was exhausting, she said.

It was already dark when Latraverse's daughter finally pulled into town. She drove up Howie Road, which had just been plowed, and turned onto Solberg. Her car ran into a berm of snow and got stuck. She called up to the house and Jerry came down to pick her up in his four-wheel-drive vehicle.

“I hopped in my pickup and tried to get down to her,” he said.

In the meantime, Debbie had started to walk up the road to meet her dad. Latraverse got halfway down Solberg, near Moody's house, and drove into a snow drift, stuck. He couldn't go any farther.

He grabbed his gloves and got out of his truck as Debbie came walking up. She offered to walk with her dad down to her car and they'd go to town together. Jerry said he'd rather go home and started walking back.

“Not one of my better decisions,” he said with a rueful smile.

In town, Kathie and Joseph LoPiccolo decided they'd get some dinner before hiking back home. Kathie was spent from the trip down and wanted to get some food in her system before making the return trip.

They stopped at a place and got burgers and fries, talking and listening to the storm blow. Once they finished, the two bundled up, stepped outside and began working their way home.

With his daughter on her way to town, Latraverse turned around and started the half-mile climb back to his house.

“It was dark and blowing like crazy,” he said.

The hike back was grueling. At his age and size, Latraverse moved slow. He trundled through the snow until he reached his own property.

He could see the lights of his house through the blowing snow and stopped at the barbed wire fence enclosing his backyard. He was cold and tired.

Using what little energy he had left, he climbed over the fence, tripped and fell to the other side. His pants had gotten caught on something on the fence, and he ended up nearly face down in a snow drift, his jeans around his knees.

Sometime during the process, he had pulled off his gloves to fiddle with his pants. When he tried, he couldn't get the gloves back on his hands.

“That was it, and I just couldn't go anymore,” he said.

So he began shouting over the wind to his wife.

“I heard him yelling my name,” Pat said.

She called her friend Marian Bainter to let her know what had happened and that she was going out after her husband. She then grabbed a blanket and scrambled outside and found him in the snow. At 5 feet, 1 inch, she knew she would have no chance of moving him.

With the blanket, Pat tried as best she could in the wind to cover up Jerry and get him protected. She wanted to get him inside. The door was only dozens of feet away, but she couldn't do it.

“My brain knew what to do, but my body couldn't do it,” she said, emotion choking her voice.

So she sat in the storm with Jerry and waited.

At about 8:30 p.m. Moody, a half-mile down the road, had just gotten off his shift with the Highway Patrol. Pulling into his place, he saw the empty Latraverse truck in the road and thought it was odd. Once inside, his phone rang.

The Sweet Grass County Sheriff's Office was calling. A dispatcher had received a call from Bainter saying that Jerry was trapped out in the storm. The sheriff's office wanted to know if Moody could go out looking for him.

Moody put his gear back on, grabbed his flashlight and headed back out into the storm.

The wind was blowing so hard “you couldn't see or hear anything,” he said.

With his girlfriend, also an MHP trooper, he started at the truck to see if they could find footprints. Moody thought he saw a pair headed up the road toward the Latraverse place.

As they approached the fence, they thought they could see a shape through the blowing storm.

“I could see a lump laying in the snow,” Moody said.

They hopped over the fence and found Jerry in the snow with Pat nearby.

“When I got there, he was in tough shape,” Moody said.

Latraverse's hands were completely exposed as were patches of his back. His bare knees were buried in the snow.

They tried to lift him, to help him walk back to the house, but it didn't work. Both Latraverse and Moody fell back into the snow. Latraverse was barely responsive and couldn't move.

Moody asked Pat if she had a sled they could put him on. Pat told him they had one in the barn but she didn't think she could get there through the storm.

Meanwhile, Kathie and Joseph LoPiccolo were coming up the road pulling their load of groceries.

Moody saw his neighbors, saw the sled and ran over to them. Quickly they unloaded the groceries and ran through the snow back to the fence.

There, they rolled Jerry onto the sled and pulled him across the backyard, through the door and into the living room, where Moody began to revive him.

“He got it together,” Pat Latraverse said of Moody as they piled blankets on Jerry and rubbed his body. “He was relentless. He wouldn't stop.”

Moody knew Jerry needed serious medical attention, but the road was impassable. They wouldn't be able to get the emergency medical technicians to the house.

So they called another neighbor, Norm Starr. Starr lived near the bottom of the lane and had a backhoe that could clear a path up the road for the EMTs. He fired up the tractor, and the emergency personnel followed him up the road in a caravan to pick up Jerry.

“We live in one hell of a nice town,” Jerry Latraverse said, choking up.

He and Pat are staying in town with Marian Bainter until the lane to their house is completely cleared. Jerry's hands are all bandaged up, with blisters and burns on seven of his 10 fingers. His knees are damaged, too.

Still, they feel blessed. They celebrated Thanksgiving on Friday with Debbie and Marian, thankful that Jerry was alive.

Pat Latraverse said if it hadn't been for their neighbors, Jerry wouldn't have survived. Another 15 or 20 minutes out in the cold and that would have been it, she said. They saved his life.

Like Moody and the others, Kathie LoPiccolo had a matter-of-fact attitude about the rescue.

“It's just what friends do,” she said.

Pat Latraverse kisses her husband, Jerry, on Friday after talking about Jerry's rescue outside Big Timber on Thanksgiving Day. Jerry suffered frostbite on his hands, below, after being stranded outside his home during a blizzard.

Jerry Latraverse's eyes fill with tears while talking about his Thanksgiving Day rescue on Friday in Big Timber. Jerry suffered frostbite after being stranded outside his home during blizzard conditions.

Jerry Latraverse suffered frostbite on his hands after being rescued from blizzard conditions on Thanksgiving Day near Big Timber.