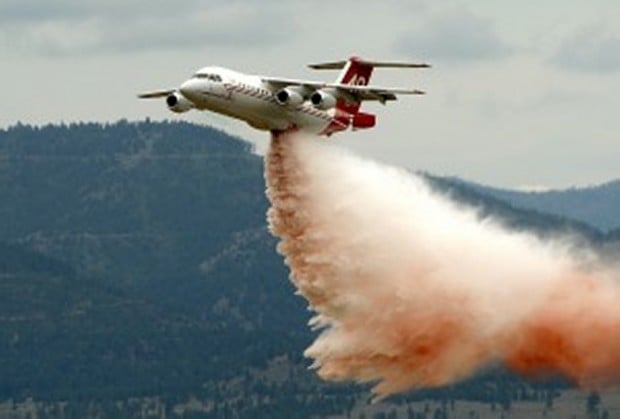 A Neptune Aviation air tanker, the BAe-146-200, makes a water drop while flushing fire retardant out of its tanks at Missoula International Airport in June 2012. 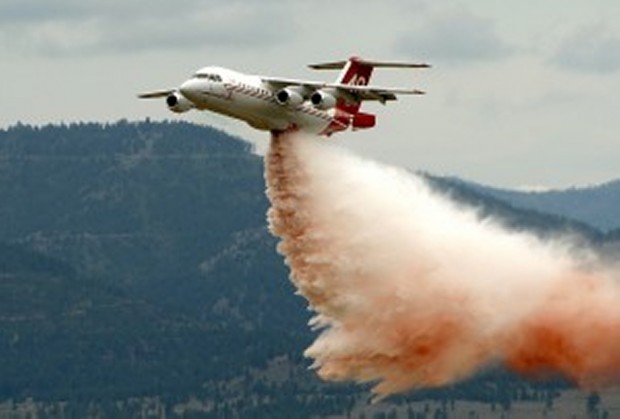 “We anticipate having both of those airplanes up no later than the first of August,” Neptune president Dan Snyder said of the award for two BAe-146 aircraft. They will join a third BAe and seven Cold War-vintage P2V propeller-powered planes in the Neptune firefighting fleet.

The contracts for seven new planes came ahead of a scheduled June 25 release date after President Barack Obama signed legislation on Wednesday relieving the Forest Service of a 30-day waiting period on major purchases. The bill passed both chambers of Congress by unanimous consent.

“This is a major milestone in our efforts to modernize the large air tanker fleet, which plays a vital role in wildfire suppression,” said Forest Service Chief Tom Tidwell. “As we mourn the recent loss of two air tanker pilots, we must continue to meet our responsibility to be prepared to respond vigorously to wildfires threatening lives, communities, and cultural and natural resources.”

Those pilots were Todd Tompkins, 48, and Ronnie Edwin Chambless, 40, both of Boise, Idaho. The men were flying Neptune P2V Tanker 11 when it crashed on June 3 during a retardant drop on the White Rock fire along the Utah-Nevada border. On the same day, another P2V belonging to Minden Aviation crash-landed in Minden, Nev., after one of its landing gears malfunctioned.

The crashes reduced the nation’s large air tanker fleet from 11 to nine planes just as a major fire season was getting under way in the Southwest. While the Forest Service had been working on its next-generation tanker replacement for the past several years, the fatalities and loss of planes added new emphasis to awarding the contracts.

The Forest Service spends about $50 million a year on firefighting aircraft, according to National Interagency Fire Center spokeswoman Jennifer Jones. The new contracts are worth upward of $508 million over five years, although Jones said that figure is not likely to be reached. The actual spending depends on how many fires and flights each company makes during a season.

“We made a decision that these aircraft are important, so we’re going to fund them and fly them,” Harbour said Wednesday. “They’re more expensive, but we also believe the return on investment is going to be better for the taxpayers. They have considerably more capacity. They’re considerably quicker. They have better engine systems. We think they’re going to be more effective, more efficient, with lower maintenance – it’s what we were looking for.”

Neptune put its four-engine jet bomber in service last fall, and won a one-year contract to use it in 2012 before the next-generation awards were made. So far, the BAe-146 is the only modern, private firefighting plane with a tested retardant tank. Harbour said the other new planes still had to complete their testing.

“The platforms (airplanes) we’re confident in, and we’re confident in the designs of retardant tanks,” he said. “But they have not been constructed, and they are not yet tested in the target plane configuration. That will take place this winter and into spring of next year.

“The schedule for delivery in 2013 will be phased in over the fire season,” he went on. “We’re hoping for some earlier than others. That’s why we’re happy with the response on these contracts. The plans each contractor submitted took significant investment to show us how they could be successful in a short amount of time. Each one, we felt, will produce and will be capable of giving us next-generation planes.”

Snyder said Neptune would continue to fly its remaining P2Vs, which are on contract through the rest of the year. While the company plans to retire those planes as it brings on more modern aircraft, Snyder said the changeover would be phased in as the Forest Service is able to pay for the new planes.

“We will not be replacing any P2Vs this year,” Snyder said. “We have to provide them through the remainder of the year. These new planes are in addition to the contract we’re operating under.”

Neptune has already trained flight crews for the BAes, and will be cross-training its maintenance crews to work on both the jet and propeller planes at its Missoula facility. The company employs about 150 people at a base near the Missoula International Airport.

Minden Aviation had two P2V bombers on contract with the Forest Service this year, but lost one in the June 3 crash-landing.

Aero Flite owns five Canadair CL-215 scooper planes that suck water out of lakes to drop on flames. Two of those are on contract with the Forest Service, and Harbour said they might see a larger firefighting role in the future.

“They really function more in the niche where heavy-lift helicopters are now, in direct attack,” Harbour said. “They were effective last year, and we’re going to continue to see how they work.”

Large air tankers like the BAe and P2V provide indirect attack, dropping slurry on unburned areas to slow fire progress. Helicopters and scooper planes drop water directly on flames or hotspots to assist ground crews at the edge of a fire.

Aero Air is a Portland-area private jet charter business. Harbour said it also has been active providing firefighting helicopters. The Forest Service added a lot of heavy-lift helicopters to its firefighting capacity, but is now reassessing that move.

“If we can get large air tankers at the right numbers, there may be options to reduce the numbers of heavy helicopters we use,” Harbour said. “They could be cut back, based on performance and efficiency analyses.”

None of the new contracts went to very large air tankers such as McDonnell-Douglas DC-10s or Boeing 747s that have been converted to slurry bombers. Those planes have a daily availability rate of $50,000 and hourly flight rate of $22,000, but can carry almost 12,000 gallons of retardant.

“The focus of this contract was air tankers in 3,000- to 5,000-gallon range,” Harbour said. “They’re the kind we can use in lots of places and situations, the tool in the tool box you can reach for very frequently. We have no plans for a long-term exclusive-use contract focused on very large air tankers.”

A look at current wildfires across the U.S. Updated daily.

A Neptune Aviation air tanker, the BAe-146-200, makes a water drop while flushing fire retardant out of its tanks at Missoula International Airport in June 2012.