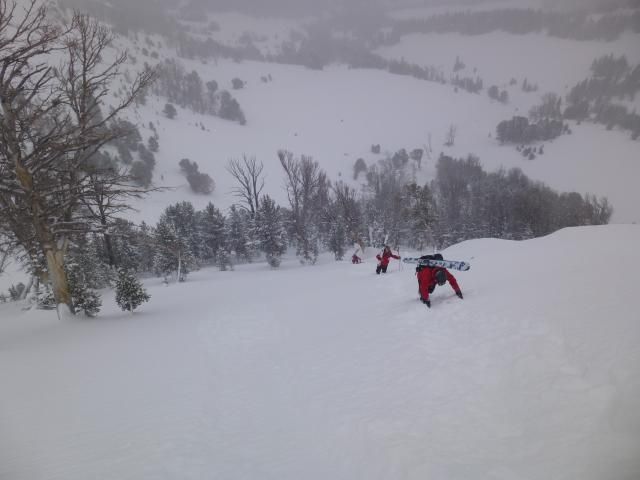 Skiers climb the slope where Darren Johnson was killed in an avalanche on Jan. 19. 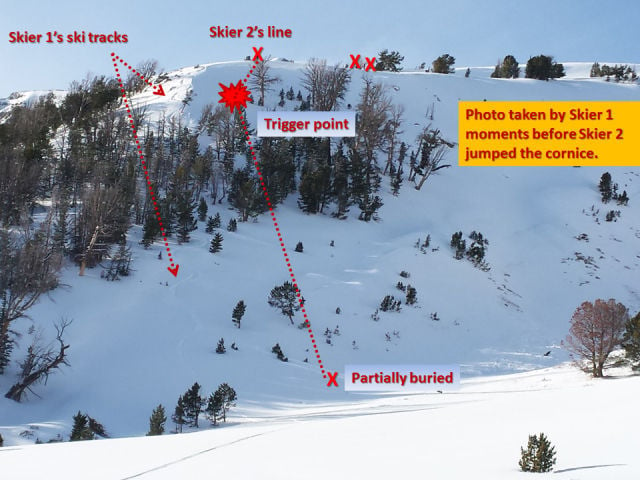 Darren Johnson was the second skier to move across the area where the avalanche occurred. He triggered the slide when he jumped from a cornice onto the wind packed slope.

An avalanche near Big Sky that resulted in a ski patrol member's death was triggered by humans, an investigation shows.

On Jan. 19, Darren Johnson, 34, died while assisting the Montana State University Avalanche Research Team in the Cedar Basin area, according to a release from the Yellowstone Club.

The statement confirmed Johnson worked for the Club beginning in November 2010. He was headed back into the ski area boundaries after the group had spent the day in backcountry areas.

Doug Chabot, director of Gallatin National Forest Avalanche Center, which conducted the investigation into the avalanche, said Johnson and the other members of his group understood the signs of instability and recognized the slope was dangerous.

“We don’t know why Darren made the decision he made, but what we do know is he decided to jump in a steep wind-loaded slope that had the deep-wind layer,” Chabot said.

A thick, dense layer of snow topped a thin, weak base layer, setting the stage for the deadly slide. Chabot said the group identified the danger the slope held and decided to take a different route across the terrain to minimize the chance of triggering an avalanche. It's not clear why Johnson chose to ski the slope anyway.

Chabot said snow conditions are only one factor in fatal avalanches. A human element often plays a less predictable part in the equation.

“It’s not common (for experienced backcountry skiers to trigger avalanches), but it’s not rare either,” he said. “It happens, and the reason it happens is experts, myself included, make mistakes. We’re human. That’s why we carry rescue gear.”

Johnson jumped from a cornice onto a wind-loaded slope in an area owned by the Yellowstone Club. His second turn triggered a slide 2 to 4 feet deep and 300 feet wide. He was carried about 300 feet and through an area with a thick group of trees, according to a report released by Chabot.

Johnson was partially buried in snow. The other skiers reached him in less than three minutes, but the trauma he suffered from traveling through the trees was fatal.

Johnson and the other members of the group carried beacons, shovels and other rescue gear. None of the skiers wore helmets, but Chabot said Johnson’s injuries were so extensive a helmet probably wouldn’t have saved his life.

The Associated Press reported Monday that 10 people have been killed in avalanches across the West in the previous 10 days. The fatal slides made the month the deadliest month for avalanches in about two decades.

The Colorado Avalanche Information Center told the AP two skiers died in a slide while backcountry skiing near the Jackson Hole Ski Resort on Sunday. There have been 14 avalanche deaths reported this season.

Breaking down the causes

The most common types of avalanches and reasons for them differ somewhat between the Pacific Northwest, where larger snow storms followed by rain are common, and the Rockies, where weak layers of snow hardened by cold and dry weather can give out deep within the snowpack. However, experts say that seemingly small changes in conditions can make a big difference in risk and that a long period without fatalities can give backcountry users a false sense of security.

January is often a time when those weak layers can cause problems in the Rockies. In parts of Colorado, where two people have died in avalanches in different parts of the state this month, the top layer of snow sat around for a while in dry, cold weather becoming sugary and unable to adhere with the snow that eventually fell on top, said Spencer Logan, a forecaster with the state's avalanche center.

"It's the kind of recipe that's just waiting for someone to find the wrong spot and trigger an avalanche," said Logan, who said more people have died in slides so far this January since January 1997.

When it comes to avalanche safety, a recent study says solo travelers or pairs are less likely to be caught in a snow slide.

10 die in Western avalanches in 10 days

DENVER — Ten people have died in avalanches across the West in the last 10 days, making this month the deadliest January for slides in nearly …

Skiers climb the slope where Darren Johnson was killed in an avalanche on Jan. 19.

Darren Johnson was the second skier to move across the area where the avalanche occurred. He triggered the slide when he jumped from a cornice onto the wind packed slope.