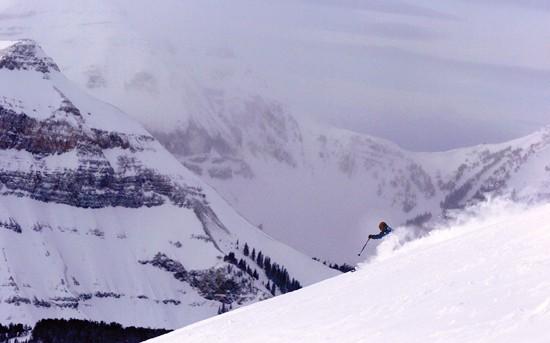 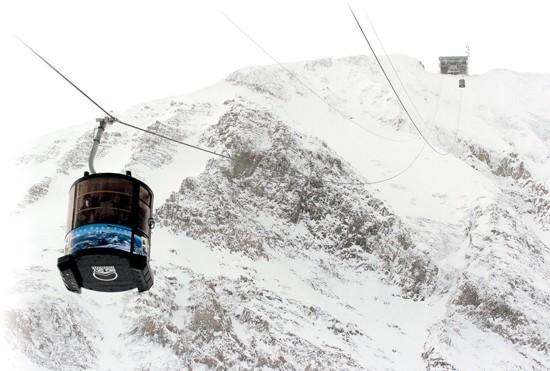 The tram makes its way to the top of Lone Mountain, elevation 11,166 feet. 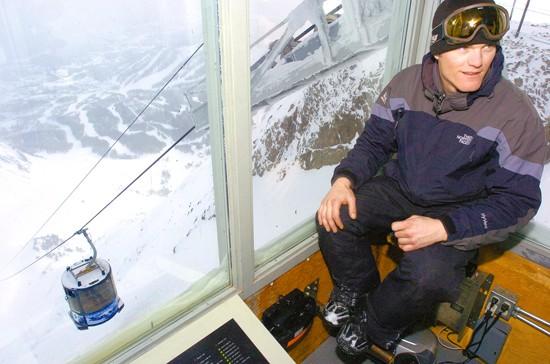 Lift operator Ryan Aaker works at the top of the Big Sky tram. 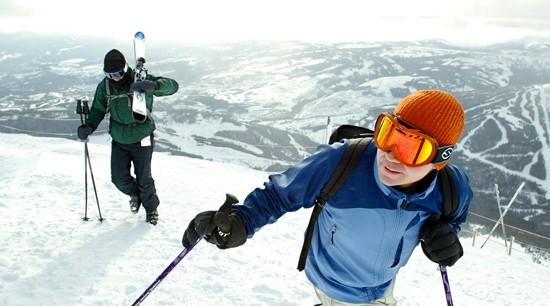 Dax Schieffer, right, and Brett French take in the view from the top of Lone Mountain.

For Lynn and Robert Jenni of Big Sky, the Lone Peak Tram has meant more than just a means to snowboard some radical runs.

On March 30, 1996, they were married atop the lift. The Tram carried the bride, groom and 75 people to the summit for a ceremony.

"It had just dumped the night before, but it was blue sky and cold that day," Lynn Jenni said. "At the end of the ceremony, we all went off the backside and trashed Liberty Bowl."

This winter the Tram, which opened to the public on Dec. 23, 1995, celebrates its 10th anniversary along with the Jennis. In those 10 years, there's no doubt the lift and the terrain it accesses have left an indelible mark on Big Sky Resort.

During its first year of operation, the Lone Peak Tram stood at the pinnacle of the U.S. ski industry, opening 11,166-foot high Lone Mountain to skiers and snowboarders without a hike.

Back then, the Tram gave Big Sky the biggest vertical drop — 4,180 vertical feet — in the United States, garnering oohs, aahs and plenty of applause from the ski press for the ski area, now owned by Boyne USA Resorts. But only a year later, Aspen Snowmass spoiled the party by unveiling a lift 326 feet higher.

Snowmass hasn't, however, overshadowed Lone Mountain's terrain. One run off the top, the Big Couloir, is a double black diamond (extreme) with a yellow exclamation point (sign out with ski patrol, beacon, shovel and partner required). Although most of the 25 named runs off the mountaintop average between 30 to 40 degrees in pitch, intermediate skiers can still ride to the top of the mountain and back just to check out the expansive view.

Adding such steep terrain to its menu forever changed the flavor of Big Sky Resort by tripling the amount of expert terrain and expanding the mountain by 50 percent, adding 1,200 acres. To ski or snowboard from the top of Lone Mountain via Liberty Bowl to the base area became a six-mile run.

But after the Tram was opened for business, Schernthaner said, the resort seemed to change overnight.

"Wow! It's imposing. You go up that sheer vertical face and it feels like you're going to crash into the rocks," he said of the Tram ride.

"Before the Tram was built, there were only a handful of hard-core skiers who would hike up to ski the back side of the mountain," he said. "You'd have it all to yourself. Now, you can do Tram laps. Ski as much as you can."

Part of a $3 million project to upgrade Big Sky Resort, the Lone Peak Tram was a novelty for the U.S. ski industry. It was the new kid on the block compared to Jackson Hole Mountain Resort's now 40-year-old Aerial Tram, which will be closed at the end of this summer. And in an industry where numbers are everything, Big Sky now has 4,350 feet of skiable vertical.

Helicopters made 3,000 trips to the top of Lone Mountain to build the facility, hauling construction equipment, workers and concrete.

The result is a lift much like those found in Europe's Alps. Two Trams, or cabins, alternately haul about 15 skiers, snowboarders or sightseers a half-mile upwards in about four minutes. At the highest point, the cars are about 500 feet above ground.

A 250-horsepower high-speed electric motor powers the lift. The mile-long cable that carries the Tram cars is almost 2 inches thick. And because the cable stretches as the cars reach their midpoint, the large bull wheels through which the cables turn actually slide to loosen and then tighten the cable during the ride up.

No slouch, the Tram is the fastest lift on the mountain, moving its cars at 13 mph up the 1,450-foot vertical climb. On a good day, the Tram can transport more than 120 people an hour to the 11,150-foot high unloading site.

This is where Tram operator Ryan Aaker, 25, likes to spend his days. An avid snowboarder, he relishes the chance to make a quick run down Crons Pocket or the Big Couloir before the public arrives. And you can't beat the views on a clear day — one that includes the Spanish Peaks to the left, the Hyalite and Absaroka mountains dead ahead and, to the right, the precipitous Madison range.

"This is the best seat in the house," Aaker said, hopping up onto a small, padded ledge that offers a glimpse straight off the edge of the peak. "Some guys can't close the door" to the cabin, he noted, due to the sense of claustrophobia in the tiny room dangling off the edge of the concrete precipice.

Working at the second-highest office in the state (the ski patrol next door is highest) does have its challenges, Aaker said. In only his second week on the job, the mountain experienced 100 mph winds.

"I couldn't bring myself to get in the cabin by myself," Aaker recalled with a laugh. But with little other choice in how to get down, he stepped in and closed the door. Now, such incidents are part of the routine.

"I had a guy last year who crawled off the Tram," Aaker said. "His kids were running around and he was yelling at them to get back here.

"Some people won't even get out of the cabin," he said. "They want to go straight back down."

Top of the heap

Nearby, just feet below Lone Mountain's summit, the ski patrol's office is sheltered on the second story of a concrete bunker. The office resembles a college dorm room. A hot plate stands at the ready to heat up a nearby can of refried beans. Maps of other ski resorts paper one wall. Men's magazines, such as Maxim, litter the office's two picnic tables. A minimum of two patrollers staff the office all day.

With the addition of the Tram, Big Sky Resort added another 10 patrollers a day to its staff, said Bob Dixon, who heads Big Sky's ski patrol.

The installation of the Tram actually made Dixon's job easier in some respects, he said.

"We used to have to do a lot of hiking to get to our avalanche control routes," Dixon said. "And it didn't increase the number of accidents that much, like we had anticipated, because of the quality of skiers up there."

Ski patroller Pete Gibbons, on an exchange visit from Sun Valley, Idaho, praised the terrain that the Tram has opened up.

"Give us this day our daily Couloir," he said, snow melting off his reddened face. Asked about skiing from the top of Lone Mountain, Gibbons smiled and said. "It's a very alpine experience, and there are consequences. But these guys do such a good job that it's not bad."

Brett French can be reached at french@billingsgazette.com or at 657-1387.

The tram makes its way to the top of Lone Mountain, elevation 11,166 feet.

Lift operator Ryan Aaker works at the top of the Big Sky tram.

Dax Schieffer, right, and Brett French take in the view from the top of Lone Mountain.
© Copyright 2020 Billings Gazette, 401 N Broadway Billings, MT | Terms of Use | Privacy Policy
Powered by BLOX Content Management System from TownNews.com.
You don't have any notifications.