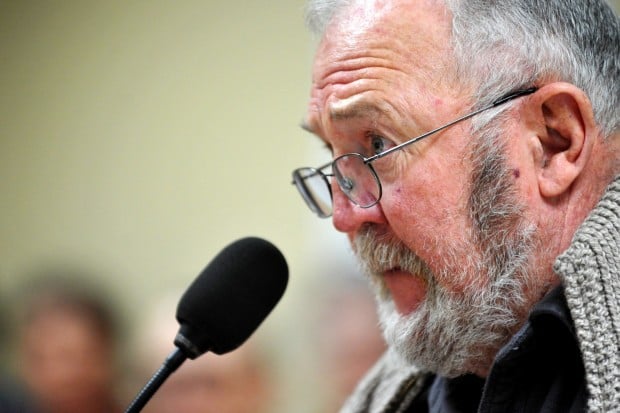 Frank Jay Rigler, a proponent of HB 249, testifies Tuesday afternoon during a hearing. 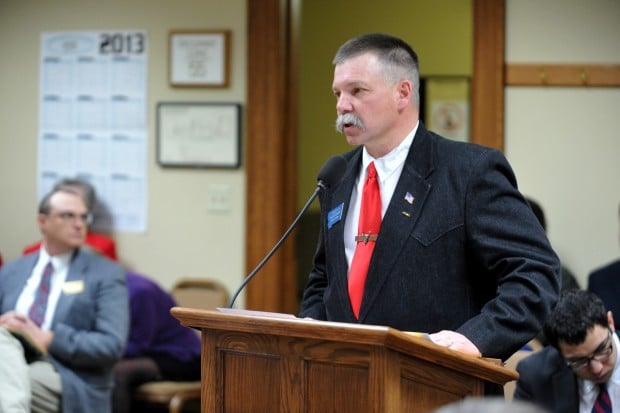 Rep. Alan Doane, R-Dawson, speaks before the Fish, Wildlife and Parks committee Tuesday afternoon about HB 349, which he introduced.

HELENA — A bill that would allow wild bison to be shot on sight if they trespass on private property received mixed reviews during a agriculture committee hearing Tuesday.

Alan Doane, R-Bloomfield, characterized his House Bill 249 as a private-property measure that addresses how landowners can address wild bison on their property.

“It allows the property owner to make decisions on what happens on your property,” Doane said. “It’s hard for somebody to say in Helena how to let somebody in Timbuktu handle a potentially dangerous situation.

“… A free man in a free country who owns deeded property should be able to say what he does on his property.”

Bill Hoppe, whose family has ranched next to Yellowstone National Park for six generations, said the wild bison that roam outside of the park are “dangerous, destructive and diseased.” He noted that in Gardiner, metal pens have been installed at school bus stops to protect children from the wild bison.

“So we’re corralling our kids and letting dangerous animals run free at the school bus stop,” Hoppe said. “And 50 percent of the Yellowstone bison carry brucellosis, which is a threat to livestock and the livestock industry. It’s a threat to human health as well.”

Other proponents of the bill, including ranchers in northeast Montana, added that free-ranging bison are known to scare horses, run through fences and eat crops.

“Private property rights are paramount to our way of life,” said Jim Steinbeisser with the Montana Stockgrowers Association. “I do like the idea of us to have recourse while protecting our livestock from bison.”

However, others testified that the state is working on a bison management plan for the wild animals, and while they appreciate the need for property owners to protect their investments, this bill isn’t the way to go about that.

“I find it ironic that all those native species are such a problem for the foreign introduced species that were brought in from Europe,” Stan Frasier said. “The bill is a bad idea. If you pass it people will do the same for cattle on public lands.”

Shane Morigeau, with the Confederated Salish and Kootenai Tribes, said the bill reduces bison status to that of “vermin” and interferes with agreements among the tribes and state and federal agencies on bison management. He noted that there hasn’t been a documented case of brucellosis being transferred from wild Yellowstone bison to cattle — the disease can make both domestic and wild animals abort their fetuses — and that the bill is “trying to fix something that’s not broken.”

“If passed, HB249 is a dangerous precedent and opens the door to killing all wildlife that moves onto private property,” Morigeau said.

Jim Kropp, Montana Fish, Wildlife and Parks chief law enforcement officer, noted that statutes already are in place for property owners who feel threatened to shoot wild animals, then promptly call his agency to report it.

Mike Fox, a Fort Belknap tribal counsel member, questioned whether elk also should be shot for trespassing since they’re carriers of brucellosis. He said bison aren’t any more dangerous than a domestic bull as long as they’re given space, and that they’ve provided a strong economic boost to his community.

“We have managed the buffalo for 20 years,” Fox said. “My biggest concern with this bill is it’s goes too far. It’s basically killing buffalo on sight.”

Regardless of what happens with the bill, Kropp urged the committee to move forward cautiously because anytime Montana does anything with wild bison, the activities are watched not just nationally but internationally.

“Everyone has a lot of passion concerning this issue and it’s a very contentious issue on many fronts,” Kropp said. “Back when we shot animals on public and private lands it was on the national news every night.

“What’s important is already spelled out in law.”

He quoted from a 1940 Supreme Court decision in which the justices noted that wild game existed in Montana long before people, and that anyone who acquires property in Montana does so with the knowledge that they’ll share it with wildlife.

“Wild game does not possess the power to distinguish between fructus naturales (natural food) and fructus industrials (crops), and cannot like domestic animals be controlled through an owner,” Kropp said, reading from the decision. “Accordingly, a property owner in this state must recognize the fact that there may be some injury to property or inconvenience from wild game for which there is no recourse.”

He added that the decision was affirmed earlier this year by a Park County judge.

Can CO2 be transformed into jet fuel?

Can CO2 be transformed into jet fuel?

Frank Jay Rigler, a proponent of HB 249, testifies Tuesday afternoon during a hearing.

Rep. Alan Doane, R-Dawson, speaks before the Fish, Wildlife and Parks committee Tuesday afternoon about HB 349, which he introduced.