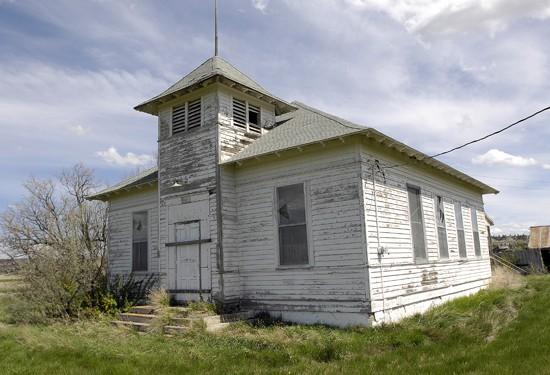 This abandoned schoolhouse in Bighorn is one of many closed schools in Treasure County. 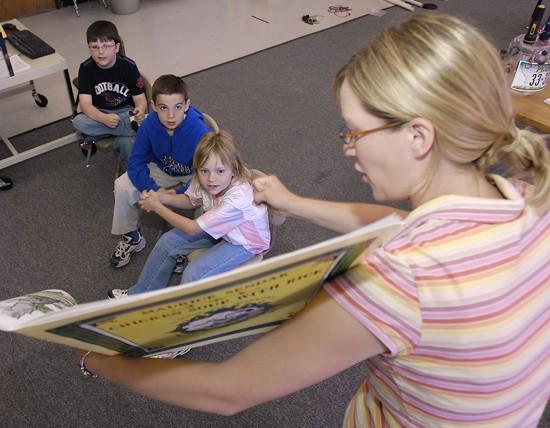 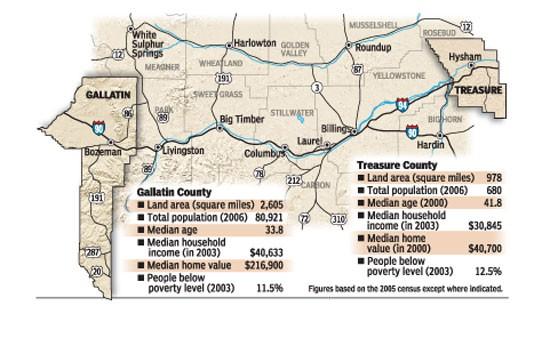 BRETT FRENCH Of the Gazette Staff

Jim Sylvester says the economic viability of small towns in Montana can be predicted by a simple factor: Do they have a Town Pump gas station?

"They've done their market research," said Sylvester, an economist at the Bureau of Business and Economic Research at the University of Montana. "Towns with a Town Pump are going to survive longer than those without one."

Maybe fittingly, the gas station in Hysham, the seat of Treasure County, is a Sinclair station. The company's mascot is a dinosaur. Based on his formula, Sylvester speculated that Hysham is a community in trouble, and along with it the entire Eastern Montana county.

Here's the trend Town Pump's bean counters may have charted: With only 680 people, Treasure is the fastest-shrinking county in the state, falling 21 percent in six years. Its populace can take some solace in the fact that, despite the loss, it is still only the second-smallest county in the state. Petroleum County, two counties directly north of Billings, and its 474 scattered residents claim top honors for being at the bottom.

"There were more than 2,000 people in Treasure County when it became a county during the homestead era," said Mack Cole, 70, a Treasure County commissioner and former state senator.

In 1919, Treasure was carved out of Rosebud County to the east. But since its heyday, when land was given away to lure settlers, Treasure has seen a fairly steady population decline because of changes in the economy and agriculture.

By 1969, the county's last rural school, in the small community of Myers, was consolidated with the Hysham School District. Now there is only the one school, and even its continued existence seems shaky.

"The way the state is funding schools, it's like they want us to close," said Larry Fink, the 55-year-old school superintendent and librarian, and also Hysham's mayor. "That would be sad for us, because we're the only school in the county."

Treasure County schools have been boarded up at Bighorn, Myers, Sanders and Sarpy Creek, to name a few. Some students ride the bus 30 miles to reach Hysham School in the town situated just south of the Yellowstone River. All told, 131 students attend the K-12 school.

But based on the school's enrollment, and the county's aging population, the future is grim. Treasure County's median age is 47. Fewer new students are entering the school system, and the school will see a net loss of nine students next year. Perhaps most alarming to Fink is that only three students are in first grade, six in kindergarten.

"When I came here 30-some years ago as an elementary teacher, there were more than 100 students in the high school alone," he said. "There were still families with 12 kids. We don't have those anymore."

Now, with positions such as his consolidated, the school has a staff of 19 - still the largest employer in the county.

Fink worries that if the school continues to lose students and the money they bring in, the state will force a consolidation with the town of Forsyth, 30 miles to the east in Rosebud County. Fink and others fear that would mean the end of Hysham.

"It does get really tough for them," Sylvester said. "Your tax base is disappearing. It's getting down to the point you may see county consolidation in 20 years. They have to. It's fiscally irresponsible not to."

Kathleen Thomas, Treasure County treasurer and county superintendent of schools, said she wouldn't be surprised if county consolidation were considered down the road.

"I hate to see that, but some year it might occur," she said.

Thomas moved to Hysham more than 27 years ago from the Big Timber area, got married and raised a family. She likes small-town life.

The grocery store has been around since 1918 and still charges purchases to family accounts. An Irish setter lolls around in front of the Brunswick Café and Bar on Elliott Avenue. A sign outside the café advertises the lunch special, chipped beef on toast.

Almost half of Treasure County's population lives in Hysham.

"There's not all the hassle and hustle and bustle," she said. "I like when you know your neighbor, and you're not a stranger. It's a rural area, but it's not far from Billings."

Despite the amenities of Hysham that Thomas describes, all four of her children have left the county.

"There's just nothing much to keep and attract the young people," she said.

Instead, she points to retirees moving in from the Billings area and out-of-staters buying up large ranches as possible economic salvations for the community, or at least a way to keep the population stable.

"Places like Treasure County are seeing an increase in out-of-staters buying big chunks of land," said Randy Carpenter, a land-use planner for the Sonoran Institute in Bozeman, which tracks western trends.

Frank Borman, one of the first astronauts to orbit the moon, bought a ranch in Treasure County. E. Stanley Kroenke, a son-in-law to Wal-Mart founder Sam Walton, also owns one of the county's largest tracts of land.

"A lot of it is just, man, you've got 12,000 acres in Montana," Carpenter said. "You've got someone to run your ranch and you come out there two weeks a year."

Bird hunting, or hunting in general, is frequently cited as a reason for purchasing one of the large ranches, Carpenter said. Often, the absentee landowners will lease out the acreage to locals for farming and grazing, a modern version of sharecropping.

"But the average person looking to raise a family and get a decent job, they're not moving in," Carpenter said.

That's not entirely true. A few young people do return to take over a family business, or commute to other towns to work, or to live with family while paying off college debt. But there aren't many.

Some local farmers and ranchers also stubbornly hang on in the face of climbing real estate values.

Cole, the county commissioner, resides on a ranch that has been in his family for more than 100 years. Although the acreage about 15 miles west of Forsyth still produces sugar beets, corn and hay, all of the irrigated land has been leased out. There's still dryland wheat to be farmed, and he runs Black Angus cattle and raises registered quarter horses with the help of his son, Cass, who supplements his income by teaching in Forsyth.

"Treasure County is an agricultural county," Cole said. "Farms and ranches are getting bigger. Tractors are replacing people. It used to be a lot of hand labor. But now one person does the work of four or five people. And that's why counties like Treasure are losing people."

"The land's so expensive you couldn't come in and buy it and pay for it farming or ranching," Cole said. "It's amazing what places are selling for."

Despite the worrisome outlook, Cole still holds out hope that some industry may find the county desirable and build a plant that will attract workers and their families and revive the economy.

"It doesn't have to be Colstrip," he said of the town to the southeast that is built around coal extraction and power generation. "A small industry would be a salvation."

But Carpenter, of the Sonoran Institute, said extractive industry is not the answer for counties that want to see stable growth.

"The smartest economic development in the long run is education and training for a job force, amenities like schools and maintaining natural resources," he said. "That's the future of the New West economy. Maintaining those amenities your place has is key."

Carpenter, who moved to Bozeman from Iowa, said his former state went the wrong direction when it built up a huge hog farming industry. Small Iowa towns are now dying as young people choose not to stay in the family farming business, he said.

"Maybe Treasure County can do it right and develop industry while protecting its amenities," Carpenter said.

Or maybe Treasure County's amenity is having no development, little industry and the problems associated with growth.

"It's a nice community," said Carol Gamble, who helps run the Groceries and More store in Hysham. "You can let the kids run. But there aren't a lot of job opportunities."

BreAnn Lytle, 18, attended all 12 years of her schooling in Hysham. She graduated this spring with 10 classmates.

"I like the smallness," she said. "I couldn't imagine not knowing everyone, because here, you know everyone and the names of their dog."

Her classmate Nicole Iskes, 18, agreed and said she has no desire to settle in a larger town or city.

"I plan to settle down in a rural community," Iskes said. "I just like the atmosphere. Everyone waves at you."

Yet both young women will pack up next fall and travel east for college - Lytle to Dawson Community College in Glendive and Iskes to Miles City Community College. Lytle said she wouldn't mind returning to Hysham after she earns her teaching certification.

"But I don't know if there'll be much of a school if I decide to come back," she added. "All the young people aren't coming back"

Yet hope remains the hook that Hysham residents hang their hats on.

"I can foresee, within the next 10 years, the boom will be over in Western Montana," said Fink, the school superintendent/librarian and town mayor. "People will want more elbow room and will move to the east. If we can survive until Billings moves this way …"

This abandoned schoolhouse in Bighorn is one of many closed schools in Treasure County.