A Buddhist shrine is fenced against cows. The religion was driven underground during occupation by the Soviet Union in the early 1900s. 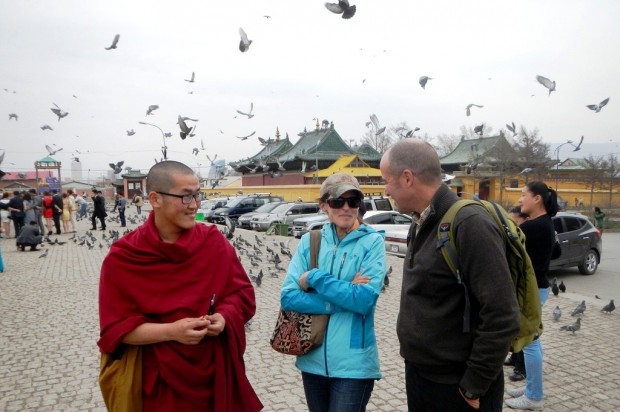 A Mongolian monk talks with Rebecca Watters and Stuart Jennings, who traveled to the country for the Tributary Fund, a Bozeman-based nonprofit. 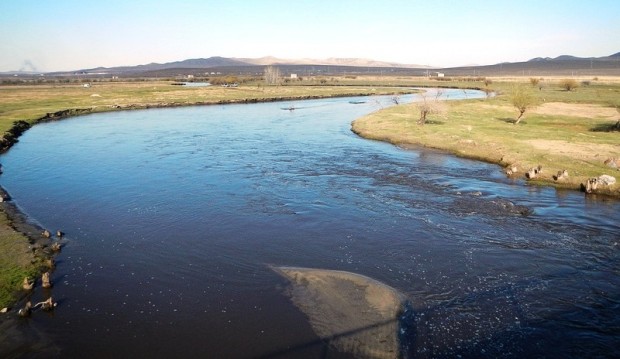 A Mongolian river bank shows the lack of vegetation in the heavily grazed countryside. 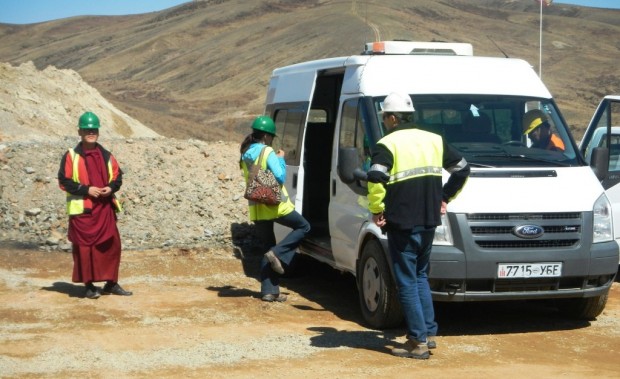 A monk in a hard hat waits for the Bozeman group to return to the van during a tour of a Mongolian mine. 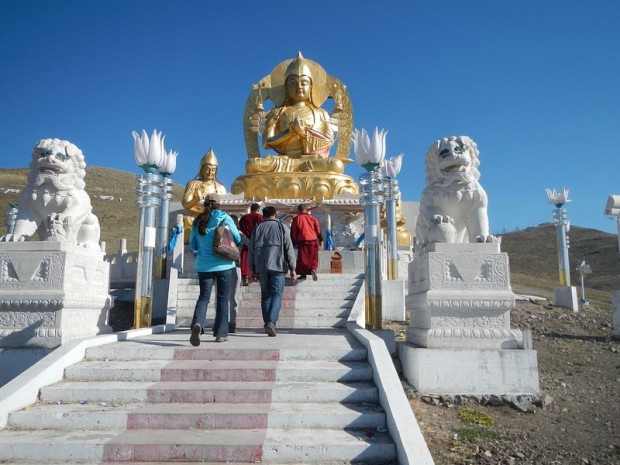 The group stopped to visit shrines along the way. 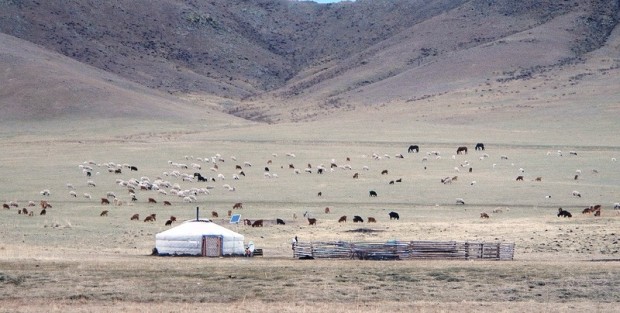 A ger is the traditional yurt-like housing used by many of the nomadic Mongolian herdsmen and their families.

Envision Montana with little or no range management and only marginal environmental regulation and you get an idea of what the stressed portions of Mongolia’s countryside look like.

It's just one step away from a desert.

Bozeman reclamation scientist Stuart Jennings, who recently visited the country, described it as a nation that has almost three times as many people as Montana on more than four times as much land with more than 20 times as many livestock.

“So a blade of grass doesn’t stand a chance in that country,” he said.

Jennings was one of three scientists from Bozeman who traveled to Mongolia in May for the Tributary Fund. Since 2004 when the group, based in Bozeman, was founded, it has worked to enhance environmental stewardship in Mongolia, partly by bringing Buddhist monks to Montana to educate them.

In Billings, the monks have visited with the Northern Plains Resource Council to learn how the group worked with Stillwater Mining Co. to develop a “good neighbor” plan. Since monks are respected in Mongolia, the Tributary Fund sees them as a crucial link to spreading a sense of environmentalism in the country, as well as using their monasteries as demonstration sites for growing native plants.

In May, the Tributary Fund decided to send -- for the first time -- some Montana scientists to Mongolia to offer the monks and government officials information and assistance on how to rebuild their hardworking landscape. Besides Jennings, the group included Bozeman geomorphologist Karin Boyd, wildlife biologist Rebecca Watters and Montana State University professor of reclamation science Cathy Zabinski. Chuluunchimeg Luvsandash, Mongolian Country director for the Tributary Fund, acted as interpreter.

“We wanted to create a situation where the monastery would be a demonstration site, providing an educational presence for people who visited the monastery on how to reintroduce species,” said Susan Higgins, the fund’s managing and program director. “But the monks had an idea of a beautiful garden with fountains,” she said -- not necessarily well suited to the dry, windy climate.

“The team was really struck with the cultural perception of what should be,” she added.

In a way, Mongolia isn’t much different from Montana when it was first exploited for its resources — minerals, timber and grazing land -- around the turn of the 20th century. Like the younger Montana, Mongolia is experiencing a mining boom in coal, gold and copper, its main exports. The mining has created new wealth, but also has fostered a greater gap between the country’s haves and have-nots. Students are leaving their nomadic herder families to go to school and not returning to the agrarian life. Many Mongolians still live in yurt-like tents, called gers, in the countryside, while in the city, coal heats so many homes that the air is polluted with a thick gray blanket of smog.

After spending two weeks touring the nation to understand the challenges and to take stock of the limited resources available, the team offered a few ideas at a conference on reclamation.

“They presented their findings on how to create lasting habits in tune with the environment and rugged lands of Mongolia,” Higgins said.

Whether the suggestions will foster any change, though, is uncertain. For one thing, some of the monks simply wanted to improve their monastery’s grounds to have a garden-like setting, no matter what type of species may best be suited to the soils and climate. For another, there were few sources of seeds to plant native species, and basic irrigation systems are nonexistent. There’s also the problems of dealing with people who have little or no science background and a young government that, although willing to adapt, has little experience with environmental restoration.

Jennings said the Mongolians don’t see sediments running into streams as pollution, despite the debilitating effects it can have on waterways and the resulting loss of topsoil. They also don’t realize that heavy grazing, its compaction of the soil and the resulting flashy runoff of rainwater is hurting the topsoil’s ability to maintain vegetation.

Continuing on their current path will eventually deplete the topsoil and vegetation to the point that much of the current grazing land will become a desert, Jennings said, but the Mongolians don’t necessarily understand the threats or how to implement change.

“They very much want to do the right thing on the land, but they’re pretty well entrenched in the way they’ve done things,” he said.

Mongolia has often been a country in turmoil. Caught between the two super states of China and Russia, it has been occupied by both and also has invaded both countries. In the 13th century, Ghengis Khan united warring Mongol clans and created an army that won the largest contiguous empire in history.

Under Soviet rule between 1930 and 1940, it is estimated that one-third of Mongolia’s male population was executed. It wasn’t until 1996 that the first noncommunist government was elected, after spending much of the 20th century battling with China and the Soviet Union. Since then, the country of about 3 million has been struggling to chart a new political course after years of invasive rule and economic collapse following the Soviet Union’s withdrawal.

Two “middle aged dudes who made a drunken mistake a long time ago” dropped off a sign they had stolen from the restaurant two decades ago.

About 29.8 million walleye fry were stocked in Fort Peck Reservoir in June with another 1 million fry going into Tongue River Reservoir.

A Buddhist shrine is fenced against cows. The religion was driven underground during occupation by the Soviet Union in the early 1900s.

A Mongolian monk talks with Rebecca Watters and Stuart Jennings, who traveled to the country for the Tributary Fund, a Bozeman-based nonprofit.

A Mongolian river bank shows the lack of vegetation in the heavily grazed countryside.

A monk in a hard hat waits for the Bozeman group to return to the van during a tour of a Mongolian mine.

The group stopped to visit shrines along the way.

A ger is the traditional yurt-like housing used by many of the nomadic Mongolian herdsmen and their families.