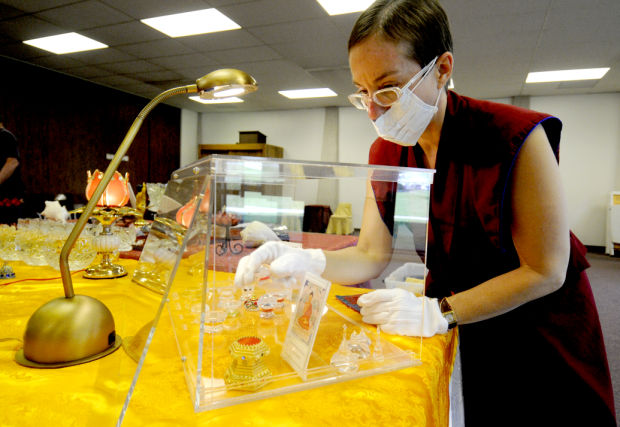 A relic more than 2,500 years old of the Buddha Shakyamuni is among those on display. 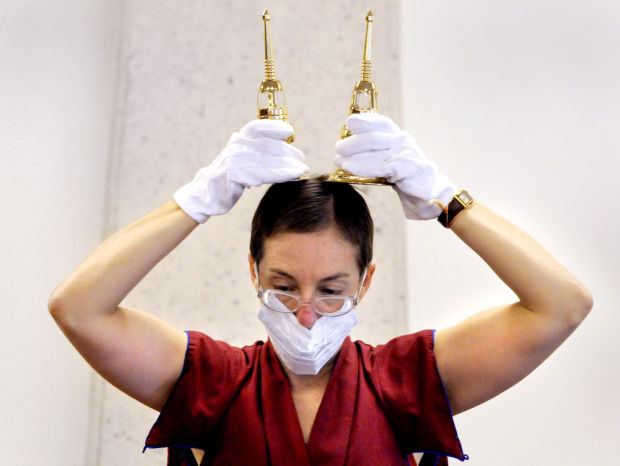 Norbu, a Buddhist nun, carries stupas Friday to be displayed at the Buddha Relic Tour at Missoula College during the weekend. She carries the sacred relics on her head, she says, to always keep them in a position above her and also for security if someone should bump into her while carrying them.

MISSOULA — Like setting a beautiful table for the holidays, a handful of Missoula volunteers on Friday helped to arrange a world-renowned exhibit of ancient and sacred relics of the historical Buddha Shakyamuni and other Buddhist masters.

First, they pushed several tables together, then covered the expanse with luscious gold and red silks. Next, they set a life-sized golden statue of the Maitreya Buddha atop the shimmering cloths, then encircled the statue with jewels, chimes, bells and crystal bowls filled with water.

Placed along the edges of the table were small Plexiglass cases housing the sacred relics believed to embody the masters’ spiritual qualities of compassion and wisdom.

More than 1,000 relics in all — which resemble pearl-like crystals of varying sizes — were found in the cremation ashes of the Buddhist masters, said Amanda Russell, exhibit organizer.

“They are said to hold the enlightened quality of mind,” Russell said as the exhibit was assembled at the Missoula College of the University of Montana. “They are not actually parts of the body; they are parts of the mind ...”

“For example, this happens in nature when you think of a diamond,” Russell said. “It is carbon that is compressed. The difference is that these great masters are changing the components of their cells through meditation.”

Strange as it may sound, Russell said, scientists at Harvard and Stanford have been studying monks who have meditated more than 10,000 hours because they see structural and functional differences in the nuerological system of the monks’ brains.

“Whatever these great masters cultivate, which is said to be unconditional love during these states of meditation, crystallizes to form the relics during the cremation.”

Eight of the relics were donated by the Dalai Lama and were rescued from Tibet in 1959 after the invasion of China.

Many of the other relics come from the collection of Buddhist Lama Zopa Rinpoche, who created the relic tour in 2001, which has been shown in 67 countries and visited by more than 1.4 million people.

Normally, such sacred relics are enshrined and everyday people don’t get to see them with the naked eye, Russell said. Rinpoche felt the world needed to have access to the power and symbol of these wise, compassionate men.

The exhibit is not a Buddhist event, Russell said, but is intended for people from all walks of life and faith to learn about the historical sacred relics.

“It’s transforming,” she said. “There is this sacred space for people to come into and step out of the everyday busy world to take a moment to reflect.

“I think that is the most healing, that time to decompress. No matter what your religion or background, you are here to cultivate love – and that is universal to all of us. This is the space that cultivates those seeds.”

Transferring the tiny relics from the safety of their traveling cases to the exhibit table is done with intense mindfulness and respect.

Head bowed and wearing gloves, Norbu, a Buddhist nun, reverentially carried the relics and carefully set them in their assigned place on the table.

The honor of handling such sacredness is so profound, the thought made her cry, she said.

“I feel such gratitude,” Norbu said, and grateful “to be able to contribute to the world in a different way, for people to experience a moment of peace, a moment of grace.”

A free public exhibit of ancient and sacred relics of the historical Buddha Shakyamuni and other great Buddhist masters from India, Tibet, Korea and China will be on display Saturday and Sunday at the Missoula College of the University of Montana, 909 South Ave. W. The exhibit is in the Health and Business Building, Room HB01, from 10 a.m. to 6 p.m. Saturday and 11 a.m. to 6 p.m. Sunday. For more information about the exhibit and the relics, go to maitreyarelictour.com.

A relic more than 2,500 years old of the Buddha Shakyamuni is among those on display.

Norbu, a Buddhist nun, carries stupas Friday to be displayed at the Buddha Relic Tour at Missoula College during the weekend. She carries the sacred relics on her head, she says, to always keep them in a position above her and also for security if someone should bump into her while carrying them.