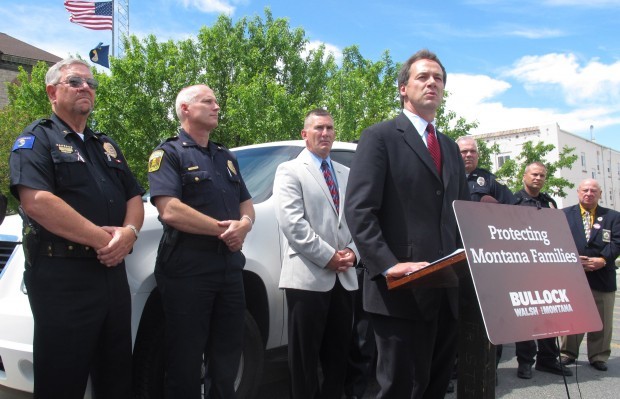 Montana Attorney General Steve Bullock speaks June 29 after receiving the endorsement of some law enforcement officials in front of the Lewis and Clark County Courthouse in Helena. 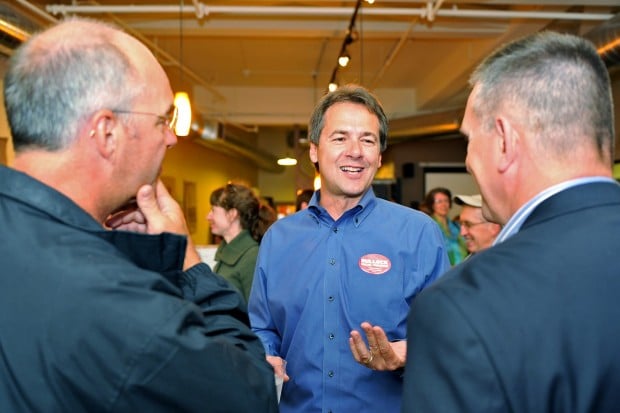 Steve Bullock talks to his running mate John Walsh, right, and Daniel Chamberlain in Helena after his June primary victory. 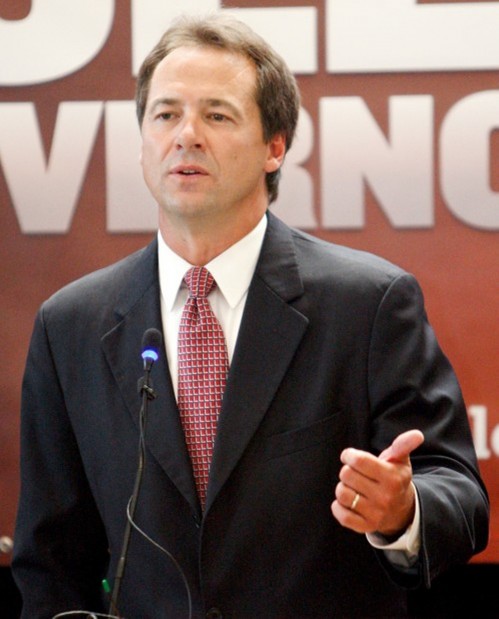 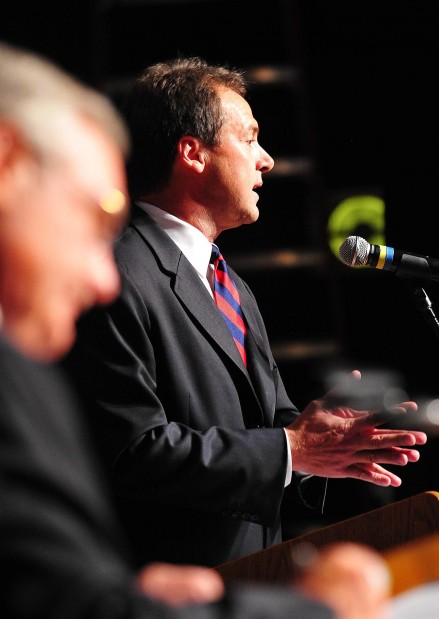 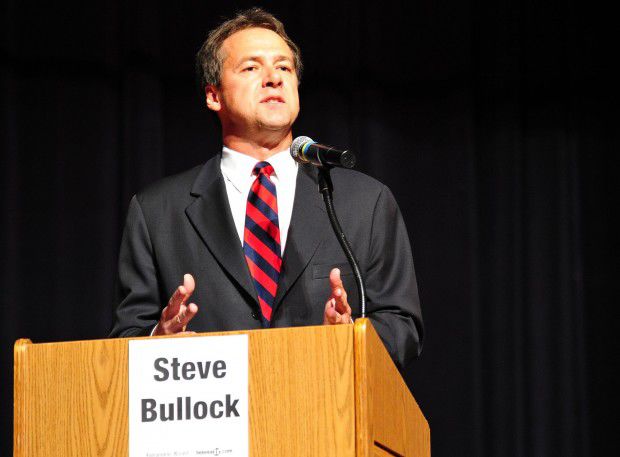 Steve Bullock at a debate in Helena last week.

GREAT FALLS — After greeting some old friends, Democrat Steve Bullock gets right to the point with union groups about the importance of the 2012 governor’s race.

Bullock, Montana’s attorney general, spoke to some members of the Great Falls Education Association earlier this month. He quickly denounced the education ideas offered by his Republican opponent, Rick Hill. Bullock recycled a comment Hill made earlier this year to a weekly newspaper that Montana ranks “second to last in quality of teachers.”

While defending Montana’s public schools, Bullock said they can be improved.

“We can innovate within the public school system,” he said. “We can move the ball overall without making a wholesale attack on our school system and teachers. We can’t do it if we take the dollars that ought to be going to public schools and we suck them out to private schools.”

Bullock’s comments draw loud applause from the teachers. Major unions, including the MEA-MFT, which represents teachers and school and government employees, have endorsed him.

One union leader tells the teachers, “If you’re in this room, your job depends on Governor Bullock."

Bullock comes from a family steeped in education. Bullock’s late father, Mike, taught and administered vocational education programs. His mother, Penny Copps, served as a school board trustee in Helena. His stepfather, Jack Copps, was superintendent of schools in Billings and Helena.

Republicans have hammered Bullock repeatedly for refusing to join what they call “the bipartisan fight” after the “heavy hand of the federal government pushed Obamacare on us.” He refused to sign a friend-of-the court brief against the 2010 Affordable Care Act. Twenty-five Republican state attorney generals and one Democratic one who later switched parties signed the brief.

“Why join lawsuits where our participation doesn’t matter?” Bullock asked.

Bullock earlier spoke to some blue-collar union members at the Great Falls Labor Temple and burnished his credentials as someone who has created natural resource industry jobs. He is one of the five members of the state Land Board, managing timber, surface and mineral resources on state trust lands for the benefit of schools.

“This Land Board has generated more revenue for schools than any other Land Board in history,” Bullock said.

He doesn’t mention that he opposed the leasing of the Otter Creek coal tracts in southeastern Montana, an $86 million deal for the state in bonus payments alone. Bullock unsuccessfully tried to lease the coal for a higher price.

The two O’s — Otter Creek and Obamacare — are the issues on which Republicans hammer Bullock repeatedly.

Bullock told the union leaders that he was on board early behind the construction of the Keystone XL pipeline, which would cross part of Montana.

He reminded the union leaders how he has stood up for access to public lands and streams as attorney general and as a top deputy in the office.

“No one has fought harder for our right to hunt and fish on public lands,” Bullock said.

Then comes the kicker. He told the trade union members that Hill supports a right-to-work law, which prohibits requiring workers to pay union dues to hold a job. In contrast, Bullock vowed to veto any right-to-work bill if he is governor.

No issue is more sacred to union workers. Montana stands alone among all its neighboring states, all of which have right-to-work laws.

One union leader asked Bullock about Hill’s new TV ad, which says the GOP candidate “would reduce taxes and get rid of government regulations.”

“Do you see that working?” he asked Bullock.

“I think we should always look at where a regulation is and try to make it as predictable as possible,” Bullock replied, but added that “the sky is not falling.”

Oil rigs are being permitted in Montana in 60 days compared to 360 days in North Dakota, he said.

Bullock unveiled part two of his jobs plan later in the day at the McLaughlin Research Institute, which conducts neurogenetic research on such diseases as Alzheimer’s and Parkinson’s diseases. It builds on his earlier plan to give all Montana homeowners a $400 tax rebate on their principal residence. That’s money people will spend on Main Street, he said. Another earlier provision would eliminate the property tax on business equipment for 11,000 Montana small businesses.

In a laboratory at the institute, Bullock discusses what’s called “Building the Jobs of the Future Right Here.”

The plan is more of a broad vision statement of Bullock’s goals.

“There’s no way Montana shouldn’t be leading the nation and being the next Silicon Valley,” Bullock said, citing high-tech startups in Bozeman and Missoula.

Reporters at the news conference quickly scan the 17-page report searching in vain for any specific proposals to highlight. About the closest thing is a call for the state to better coordinate grants.

He ended the day with a stop at a rally of Cascade County Democrats in a large campaign headquarters shared by statewide and local candidates.

“The only guy getting between us and those bad bills is Steve Bullock,” Blewett said. “He’s the man for the job.”

Bullock became more animated as his speech went on.

It’s a reminder to the audience of his fight to preserve Montana’s century-old, voter-passed ban on corporate independent expenditures in state elections. Although Bullock won at the state Supreme Court, the U.S. Supreme Court ruled 5-4 this summer that the Montana ban violates its precedent in its 2010 Citizens United decision and voided the state law.

Bullock told the Democrats he’s not afraid to veto bills either.

“We’re not going to build this great economy for the county and state if we secede from the union,” he said, referring to Republican bills seeking to nullify federal laws.

A Missoula native, Bullock moved to Helena at age 4 and graduated from Helena High, where he was student body president. As a kid, Bullock and his older brother, Bill, delivered the morning newspaper to the governor’s mansion as part of their route. Now that’s where the attorney general wants to move his wife, Lisa, and their three children.

One of Bullock’s best friends growing up was Griff Williams, son of then-U.S. Rep. Pat Williams and his wife, Carol, now the minority leader of the state Senate.

“You end up going door-to-door for Pat Williams,” he said. “Carol bribed us with peanut butter and jelly sandwiches.”

Bullock graduated from Claremont McKenna College in California and later received a law degree from Columbia University in New York. He has worked for New York and Washington, D.C., law firms. He ran Joe Mazurek’s successful campaign for attorney general in 1992 and was his executive assistant attorney general and then acting chief deputy.

In 2008, he ran again for attorney general, winning a three-way Democratic primary and defeating Republican Tim Fox, 53 percent to 47 percent.

One established an electronic prescription drug registry to make it harder for people to obtain painkillers and certain other drugs from multiple doctors, a practice known as “doctor shopping.”

“I think we’ve changed the dynamics of prescription drug abuse,” Bullock says says. “We’ve done it through education, enhanced penalties and giving doctors and pharmacists the tools they need.”

To help fight Montana’s chronic drunken driving problem, Bullock persuaded the 2011 Legislature to pass what’s known as the 24/7 Sobriety Program. It forces repeat drunken-driving offenders to take breath tests, twice a day, at their own expense.

It even won the support of one of the most conservative Republicans, Rep. Krayton Kerns, of Laurel, who said: “I do believe that hell is freezing over, because I am in strong support of Attorney General Bullock’s bill here.”

The program has been rolled out in 17 counties so far at the discretion of local sheriffs. More than 56,000 tests have been administered, with a 99.7 percent success rate, the Justice Department says.

Bullock also cities his efforts to investigate and prosecute sex predators and those who abuse children via the Internet.

He’s also enhanced some consumer protection programs, reaching a deal with some large mortgage servicers to help homeowners. Qualifying homeowners can get benefits such as reductions of their mortgage principals and deficiency waivers.

Bullock now is trying to juggle serving as attorney general, running for governor and being a father and husband.

“So it’s busy and it’s exhilarating in some ways, and it’s energizing and inspiring when you see some of the good things that were happening and could happen,” he said.

LEWISTOWN — For nearly two years — since the Monday following the November 2010 election — Rick Hill has been running for governor.

Montana Attorney General Steve Bullock speaks June 29 after receiving the endorsement of some law enforcement officials in front of the Lewis and Clark County Courthouse in Helena.

Steve Bullock talks to his running mate John Walsh, right, and Daniel Chamberlain in Helena after his June primary victory.

Steve Bullock at a debate in Helena last week.