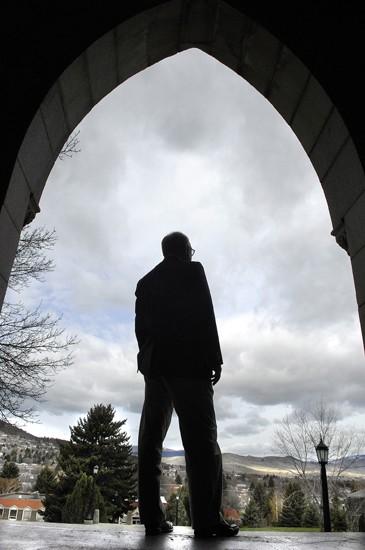 History professor and author Bob Swartout stands in an archway at the west entrance of St. Charles Hall over looking the Carroll College campus in Helena. Swartout, who has taught at Carroll for 30 years, wrote the book "Bold Minds and Blessed Hands: The First Century of Montana's Carroll College." 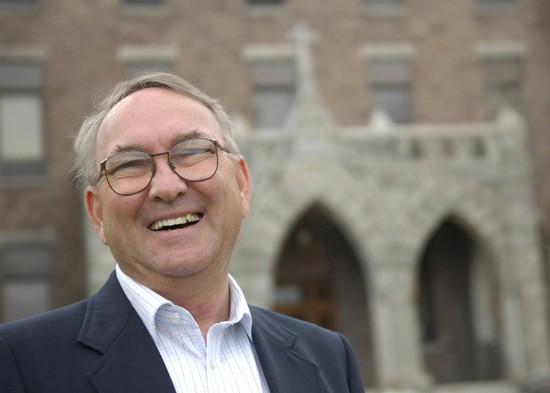 Swartout was approached by school president Thomas Trebon, as well as many of his colleages in the history department, to write a book for Carroll's 100th birthday.
The Associated Press

HELENA - Bob Swartout, who has spent the past 31 years teaching at Carroll College, will help celebrate the school's 100th anniversary this year by releasing his new book, "Bold Minds and Blessed Hands: The First Century of Montana's Carroll College."

The book looks at the school's rise as a small Catholic school in 1909 to its emergence as one of the few remaining diocesan colleges in the country.

"I'm not one of those historians who can write for a few hours and set it aside and come back a week later, or a month later," said Swartout, chairman of the history department at Carroll. "In order to maintain my focus, I need to stay with the story on a regular basis."

Silver mining surged in Montana in the 1870s. The rapid extraction was followed by a copper boom in the 1880s. Coupled with the arrival of the railroad - in particular the Northern Pacific in 1883 - the two metals helped set a path toward Carroll's creation.

"It's the coming of the railroads and the rise of industrial mining that begins to bring people into the territory in really large numbers," Swartout said. "Montana becomes a state in 1889, and a large percentage of that population is Catholic, because a lot of the miners and smelter workers were Catholic."

The large number of Catholic workers helped fuel the establishment of the Catholic Church in Montana. The Helena Diocese was created in 1884 and, by 1903, its second bishop - Carroll - recognized an opportunity to fill a spiritual niche among Montana's Catholic patrons.

"When he (Carroll) comes to Montana, not only is he anxious to establish parishes and churches for these growing Catholic communities, but he concludes that the diocese really needs a college of its own," Swartout explained. "That decision to establish Carroll grows out of these rather dramatic demographic changes taking place in Montana in the late 19th and 20th centuries."

The cornerstone for what would initially be called Mount St. Charles College was laid in 1909 in a ceremony attended by President Howard Taft.

The school held its first class in 1910, and the small state college with its limited student body made a tenacious go of a dubious beginning.

But not until World War II would the college undergo dramatic changes. They began when a large number of World War II veterans attended Carroll under the GI bill, leading the school through one of its largest shifts, both in attendance and demographics.

And where there are GIs, there are usually women. By the mid-1940s, the school began accepting female students for the first time into its nursing program. By the early 1950s, women were admitted into nearly every program the school offered.

Today, women make up nearly 60 percent of the student body.

Swartout sought the best anecdotal examples he could find to relate the stories on Carroll's evolution. He begins one chapter by talking about the arrival of the Duke Ellington Orchestra in the 1950s, which played for the school's spring formal. He opens another chapter recapping the 1931 football season, when Mount St. Charles College went undefeated, unscored upon, and beat both the University of Montana and Montana State.

While it's considered the greatest season of football in school history, Swartout, in true academic style, digs beyond the team's win-loss record. The year was 1931, he notes, and it represented one of the worst years of the Great Depression.

"The success this small college football team had at that time helped lift the spirits, not only of the school, but also the community," he said. "In some ways, it's an example of the type of perseverance that has marked the school through much of its history."

Swartout learned that Carroll's ability to change, along with its students, is what sets it apart.

"I knew anecdotally that a lot of our students volunteer for a variety of services," Swartout said. "Their sense of service is truly amazing. I've had enough interaction with other colleges and universities across the United States to know that's not necessarily the norm. We tend to attract students with that sort of mindset."

In his classes, Swartout also admits that historians are generally lousy at predicting the future.

Still, he grins and gives it a try.

"My hope would be that Carroll continues to do the things it has done so well," he said. "But at the same time, respond to the needs of society in a broader sense."

Copyright © 2009 Associated Press. All rights reserved. This material may not be published, broadcast, rewritten, or redistributed.

History professor and author Bob Swartout stands in an archway at the west entrance of St. Charles Hall over looking the Carroll College campus in Helena. Swartout, who has taught at Carroll for 30 years, wrote the book "Bold Minds and Blessed Hands: The First Century of Montana's Carroll College."

Swartout was approached by school president Thomas Trebon, as well as many of his colleages in the history department, to write a book for Carroll's 100th birthday.
© Copyright 2021 Billings Gazette, 401 N Broadway Billings, MT | Terms of Use | Privacy Policy
Powered by BLOX Content Management System from TownNews.com.
You don't have any notifications.