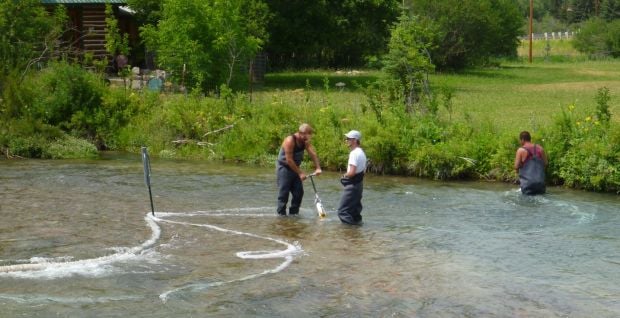 Workers for Mungus Construction of Philipsburg operate dredges to suck up contaminated sediments from the bottom of a 3-mile section of Big Spring Creek. The work took three summers to complete. 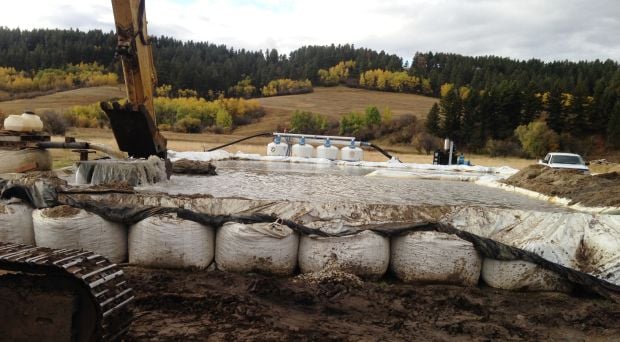 A temporary settling pond is used to settle out sediment and filter water. More than 1,500 tons of gravel was trucked to a landfill in Great Falls. 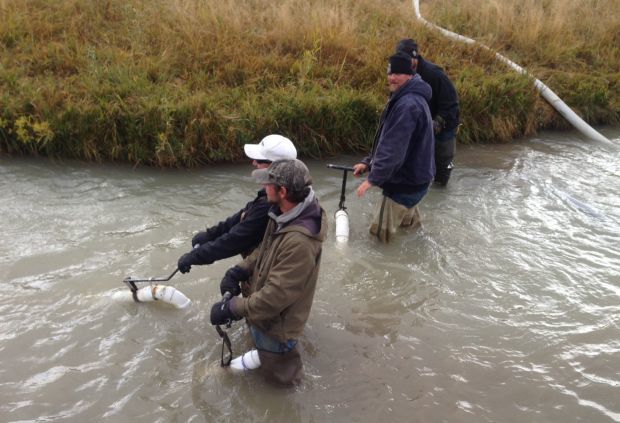 “I had the easy part,” Opper said in a phone interview.

Opper is now 26 and a graduate student in economics at Stanford University. Although he has left the state, he is still pleased with the cleanup that his grade school science project set in motion.

“It says a lot about the people of Lewistown and Montana in general about how we care about our natural resources,” he said.

Two weeks ago, Mungus Construction of Philipsburg — which was hired to dredge almost 3 miles of the creek to remove PCB contamination in the sediment — completed its work. This was the last step in what has been an exhaustive project to remove the chemical from the waterway, its fish, other aquatic organisms and from the fish hatchery raceways where the PCB-contaminated paint came from.

PCBs, or polychlorinated biphenyls, were used as a coolant in industrial processes like electrical transformers before a 1977 ban was enacted. They were also an additive in paints and caulk. When tested by officials following Opper’s discovery, PCB levels in Big Spring Creek measured up to 46 times the level deemed safe for human consumption.

The contamination in the creek had come from paint used in Fish, Wildlife and Parks’ Big Springs Trout Hatchery along Big Spring Creek. The paint – supplied by Columbia Paints — contained PCBs made by Monsanto. When the paint chipped off the sides of the hatchery, it entered the creek and problems began.

In animals, PCB exposure can cause reproduction and growth problems, as well as skin lesions and tumors. In humans, it’s believed to cause cancer.

The work to remove contaminated paint from the hatchery pools and surrounding property cost close to $10 million, half of which came from a settlement with Monsanto.

The state also paid $5 million to Big Spring Creek landowners as part of a settlement over pollution of the waterway.

The hatchery ended up destroying nearly a half-million trout that were possibly contaminated, and in 2004 FWP issued an order advising against eating any fish from the stream since the chemical builds up in the fish’s flesh. That advisory was lifted this year, but the catch-and-release regulation has been kept because of heavy fishing pressure on the creek. Lewistown's water supply was never threatened.

So the dredging of the creek was the final step in what has been a lengthy remediation process. Even after the dredging, though, there will still be PCBs in the Big Spring Creek environment.

“The cleanup plan was never intended to get rid of all of the PCBs, because they were found up to three feet deep in the sediment,” said Don Skaar, fish management section supervisor for the Montana Department of Fish, Wildlife and Parks.

To remove contamination that deep, the upper section of the creek would have had to have been rerouted and the streambed dug up. Most of the contamination was found in the stream’s sediment, especially in slower back eddies where they settled to the streambed. It was determined that by removing the sediments, the majority of the PCBs could be eliminated.

That’s where the dredging came in. The work removed 1,530 tons of sediment, which was dewatered in settling ponds and then trucked to a landfill in Great Falls for disposal. The water was filtered before being returned to the stream.

The dredging alone, which included oversight and trucking of the sediment, was a $3.2 million project that took an eight-man crew about three summers to complete.

“Now we go through a period of review where we demonstrate to the (Environmental Protection Agency) that cleanup has been successful,” Skaar said.

To do that, beginning this fall FWP will take samples from different sections of the creek’s bed. The target is to have .189 parts per million of PCBs or less. It will take five years of tests showing a clean bill of health before the creek is pronounced cleaned up.

“It will probably be a couple of months before we know what the results are, which will be our first indication of what our success is,” Skaar said.

Opper, who discovered the contamination, is pleased the creek that he used to swim in as a child is now less polluted.

“Big Spring Creek, in a lot of ways, is Lewistown’s best asset,” he said.

Although the price tag did make a few people squirm, the Montana Fish and Wildlife Commission has endorsed the purchase of about 24 acres of land in three parcels along Big Spring Creek near Lewistown.

Nearly three acres on upper Big Spring Creek southeast of Lewistown will be bought for $150,934 and about 21 acres on a lower stretch of the stream will be purchased for $188,000.

The Bank of the Rockies, which owns the 21 acres on the south side of the creek northwest of town, reduced the price from its appraised value of $250,000. And in a settlement with Monsanto Co. for its role in polluting Big Spring Creek with PCBs, FWP will receive $128,000 from the company to apply toward the purchase.

“This is as good of an integration of a public resource into an urban setting as anywhere,” said commission chairman Dan Vermillion when the purchase was approved on Oct. 10.

Big Spring Creek winds through the central Montana town and is paralleled by a 20-mile recreational trail in spots and dotted with six fishing access sites.

She noted that the acquisition on the lower creek will also enable FWP to complete the second phase of the Machler stream restoration project.

The creek is home to a large population of rainbow and brown trout – about 1,500 fish over 10 inches per mile – making it a popular sport fishery. According to an FWP environmental assessment, the creek has averaged 9,100 angling days over the past 10 years. In 2009, the stream was ranked 18th in use in FWP’s Region 4 management area.

Although the price for the upper property – about $50,000 an acre – drew some negative comments, Vermillion noted that in 50 years that price will seem like a bargain.

“This is going to be a huge improvement,” he said.

A public meeting will be held at 6:30 p.m. on Wednesday at the Fish, Wildlife and Parks' Lewistown office on a draft environmental assessment …

Workers for Mungus Construction of Philipsburg operate dredges to suck up contaminated sediments from the bottom of a 3-mile section of Big Spring Creek. The work took three summers to complete.

A temporary settling pond is used to settle out sediment and filter water. More than 1,500 tons of gravel was trucked to a landfill in Great Falls.