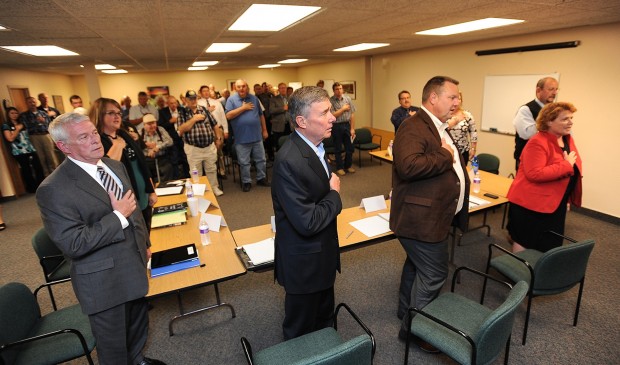 Officials recite the Pledge of Allegiance as senators Jon Tester and Heidi Heitkamp host a meeting with federal drug czar R. Gil Kerlikowske in Glendive on Friday. There was standing-room only in the Carney Conference Room at the Glendive Medical Center. 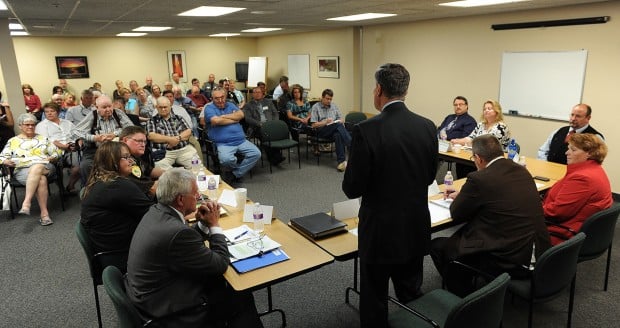 Senators Jon Tester and Heidi Heitkamp host a meeting with federal drug czar R. Gil Kerlikowske in Glendive on Friday. it was standing-room only in the Carney Conference Room at the Glendive Medical Center. 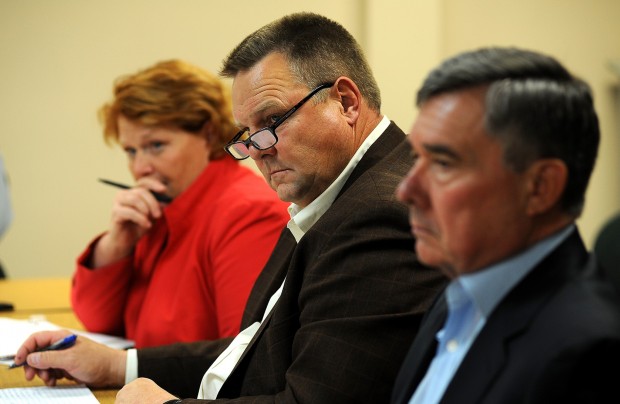 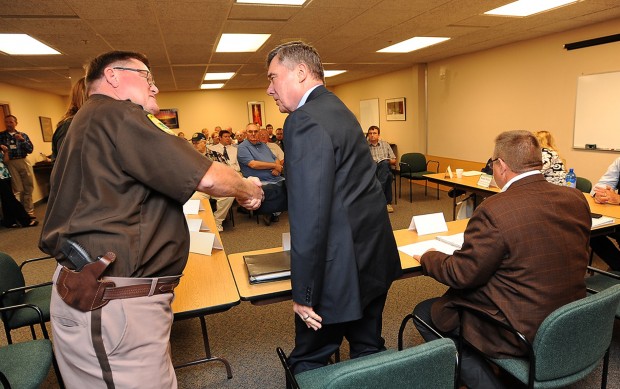 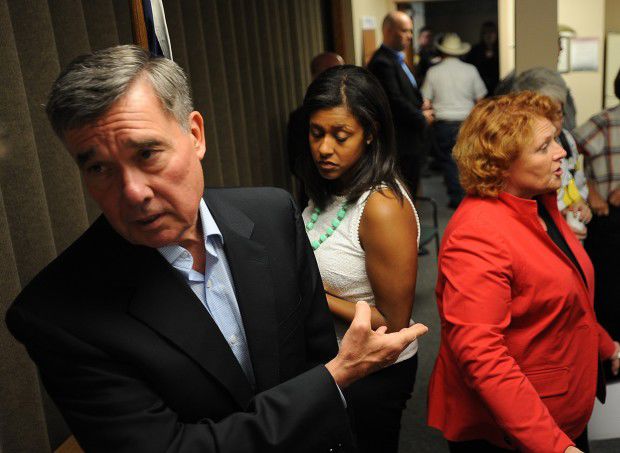 U.S. drug czar R. Gil Kerlikowske talks with residents in Glendive on Friday. There was standing room only in the Carney Conference Room at the Glendive Medical Center.

Jails in the Bakken area are overbooked and law enforcement is maxed out as drug-related crime surges in Montana and North Dakota oil patch communities.

Deputies, prosecutors and local drug counselors made the case Friday for more federal help during a Glendive meeting with the Director of the Office of National Drug Control Policy R. Gil Kerlikowske and Sens. Jon Tester, D-Mont, and Heidi Heitkamp, D-N.D. All agreed that a massive influx of some 20,000 to 30,000 well-paid oil field workers was bringing new criminal challenges to a region so rural it's often characterized as frontier.

Heitkamp, who was North Dakota state attorney general for eight years before being elected to the U.S. Senate, said the criminal challenges aren't necessarily from Bakken workers, but other dangerous opportunistic criminals attracted to oil field incomes.

Montana U.S. attorney Mike Cotter said that in early 2012, FBI and Drug Enforcement and Alcohol Tobacco and Firearms investigators concluded that Mexican drug cartels were trafficking cocaine, heroin and methamphetamine in the Bakken area. In one case, Mexican drug cartels are suspected of distributing roughly 145 pounds of methamphetamine, several kilograms of cocaine and a kilogram of heroin in the Bakken.

State, tribal and international borders bisecting the region pose jurisdictional challenges to investigators. Many times, federal agents are the only ones with jurisdiction to cross those borders, Cotter said.

But federal agents are hard to come by, said Dawson County Sheriff Craig Anderson. Local deputies are dealing with suspects who speak Spanish, Chinese, Vietnamese or Russian and no English. Simple tasks likes executing a search have become difficult because with language barriers, deputies cannot always be certain consent has been given.

The people Dawson County deputies are arresting these days are not the locals that officers are used to.

"My staff will tell you they're younger, more violent and more dangerous," Anderson said.

Deputies investigating a methamphetamine-related murder encountered a suspect who sent his girlfriend to the opposite end of Glendive to fire off a gun and distract police so the suspect could set a car on fire and destroy evidence, Anderson said.

Bookings at the Dawson County Jail have risen from 50 a day in 2008 to more than 76 a day this year, Anderson said. The county jail's 25 beds are full and people who would normally be jailed are now turned loose. At least 15 of the 25 inmates in jail Friday were not locals, Anderson said.

Drug czar Kerlikowske said more than incarceration is needed to deal with drug-related crime in the United States. The federal government is putting more resources into prevention and treatment to stem the drug tide and has ramped up its attention toward prescription drugs, the most abused drug category in the United States, after marijuana. Prescription drug abuse also thrives in areas where work-related injuries are common. Montana is one of the top 10 states for illicit drug use per capita.

"We know we are not going to arrest our way out of the situation," Kerlikowske said.

Most of the agencies weighing in on the drug challenge say more manpower is needed, from treatment programs to drug courts and police. But money is also tightening up. Cotter told the senators that Montana public safety will be at risk if law enforcement cuts scheduled for October under federal budget sequestration are realized. The federal Department of Justice budget was cut $1.6 billion in 2013 under a bipartisan agreement in Congress to cut spending. Another $1.6 billion to $2.2 billion will be cut in federal fiscal year 2014, which begins Oct. 1.

In Montana, DOJ sequestration cuts totaled $672,000 in 2013. All federal justice agencies are under a hiring freeze. Cotter's office is down 5 prosecutors. The Montana U.S. Attorney's office will see a $941,000 cut in the coming fiscal year.

Cuts are also in store for programs that benefit local law enforcement, he said.

"The decrease in funds will result in a decrease in agents and officers investigating cases, a decrease in cases prosecuted at local and federal levels and a decrease in criminals brought to justice," Cotter said. "Lives of the folks living in Eastern Montana will be negatively affected."

Tester said he will take comments from Friday's meeting back to Washington and press Kerlikowske for action.

"As soon as he gets his feet back on the ground, gets his coat and shirt ironed, were going to be talking to him. 'All right Gil, what do we do? What is the administration going to do? What are you going to  recommend and how can we help? Everybody is short-handed. There's more demand than there are people to meet it."

Tester and Heitkamp both said they would be turning to Bakken oil companies to help address the problem.

Officials recite the Pledge of Allegiance as senators Jon Tester and Heidi Heitkamp host a meeting with federal drug czar R. Gil Kerlikowske in Glendive on Friday. There was standing-room only in the Carney Conference Room at the Glendive Medical Center.

Senators Jon Tester and Heidi Heitkamp host a meeting with federal drug czar R. Gil Kerlikowske in Glendive on Friday. it was standing-room only in the Carney Conference Room at the Glendive Medical Center.

U.S. drug czar R. Gil Kerlikowske talks with residents in Glendive on Friday. There was standing room only in the Carney Conference Room at the Glendive Medical Center.