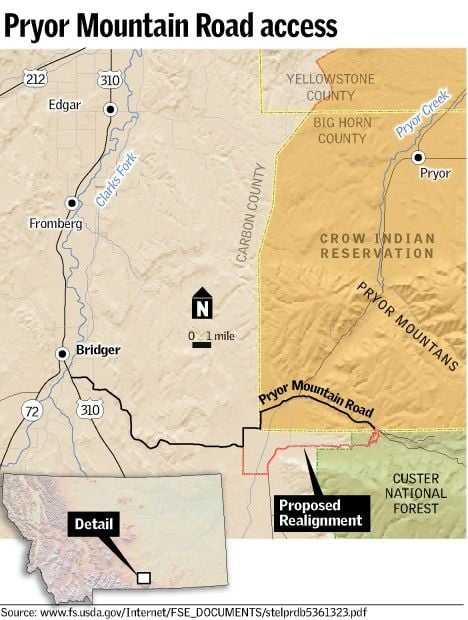 A new road is being considered by the Custer National Forest to access the northern end of the Pryor Mountains. The road would be at the left edge of the mountain range.

After 24 years of trying to negotiate easements along Pryor Mountain Road so it could improve and maintain the rutted route, the Forest Service is considering another path.

“The forest has been pursuing easements for years and it’s proven difficult to acquire access throughout the entire route,” said Amy Waring of the Custer National Forest.

Last week, the Custer National Forest issued a scoping document seeking public comment on the possibility of improving a primitive existing route along the northern edge of the Pryor Mountains as an alternative to the Pryor Mountain Road.

The 18-mile existing road, which accesses the Pryors and such features as Sage Creek Campground, Big Ice Cave, Dryhead Overlook and Pryor Mountain Wild Horse Range, crosses private and Crow Indian Reservation lands. That’s the problem. Ownership of the Indian lands is so fractionated that even locating the many owners is difficult, let alone negotiating an easement.

So the agency is considering a second option — a route that crosses private property and Bureau of Land Management and Forest Service land along the northern base of the Pryor Mountains, known as Powerline Road.

The two-track Powerline Road is not open to public travel. It exists solely as a right-of-way for PacifiCorp to maintain its 230-kilovolt transmission line. The route would need substantial upgrading to meet Forest Service standards. Those standards would include building up the single-lane road with gravel, crowning it for drainage, building turnouts, installing culverts and clearing vegetation. Work would be done as funding is available. Until the roadwork was completed, the existing route would continue to be used.

As proposed, Powerline Road would cut north off the South Pryor Mountain Road at its junction with the Rail Bed Road. The Rail Bed Road is the bed of an old rail line that went through Pryor Gap. It was built in 1901 but the line only operated for 10 years, Murray said.

For about two miles the new Forest Service route would use the Rail Bed Road before turning east. From there the road would climb along the northern end of the Pryor Mountains to an elevation of nearly 6,000 feet before dropping down to the existing road just west of the Forest Service’s Sage Creek Work Center. Altogether, the new route would measure roughly nine miles long.

Although the specifics of the Powerline Road plan are a long way from being worked out, what is sure is that the existing Pryor Mountain Road is in serious disrepair across a seven-mile section.

For those seven miles, the road crosses a “no-man’s land” in which no Bighorn County or tribal road crews have repaired the route, which shows up on Carbon County maps sometime between 1909 and 1918. The road is deeply rutted, not graveled and in places has sunk below the surrounding land, making it a bog when wet.

Last fall, the Forest Service finished repairing the Crooked Creek Road, which provides access to the center of the Pryor Mountains, farther south. That work involved the rebuilding of nine miles of roadway at a cost of $1.1 million, or about $122,200 a mile. The road had been damaged by runoff that hit after the 2002 Red Waffle fire denuded the slope above.

When heavy moisture fell, the road was deeply gouged in places, requiring extensive rebuilding. The road was closed for almost a decade before the repair work was funded.

Although Crooked Creek provides a less-direct route to the northern portion of the Pryors, the Forest Service still sees the northern road as a priority.

Waring, of the Custer National Forest, said funding for an environmental assessment to examine the Powerline Road is budgeted for this year, but she wasn’t sure when that work might be completed.

Information regarding the Pryor Mountain Road access project is on the Custer National Forest website at: www.fs.usda.gov/custer or by contacting Amy Waring at 255-1451.

Members of the Crow Tribe plan to close Sage Creek Road across their property beginning Sept. 8, citing years of use and abuse of the route wi…

More than two years after seeking public feedback on a new route into the Pryor Mountains, the Beartooth Ranger District is resuscitating its …

A new road is being considered by the Custer National Forest to access the northern end of the Pryor Mountains. The road would be at the left edge of the mountain range.