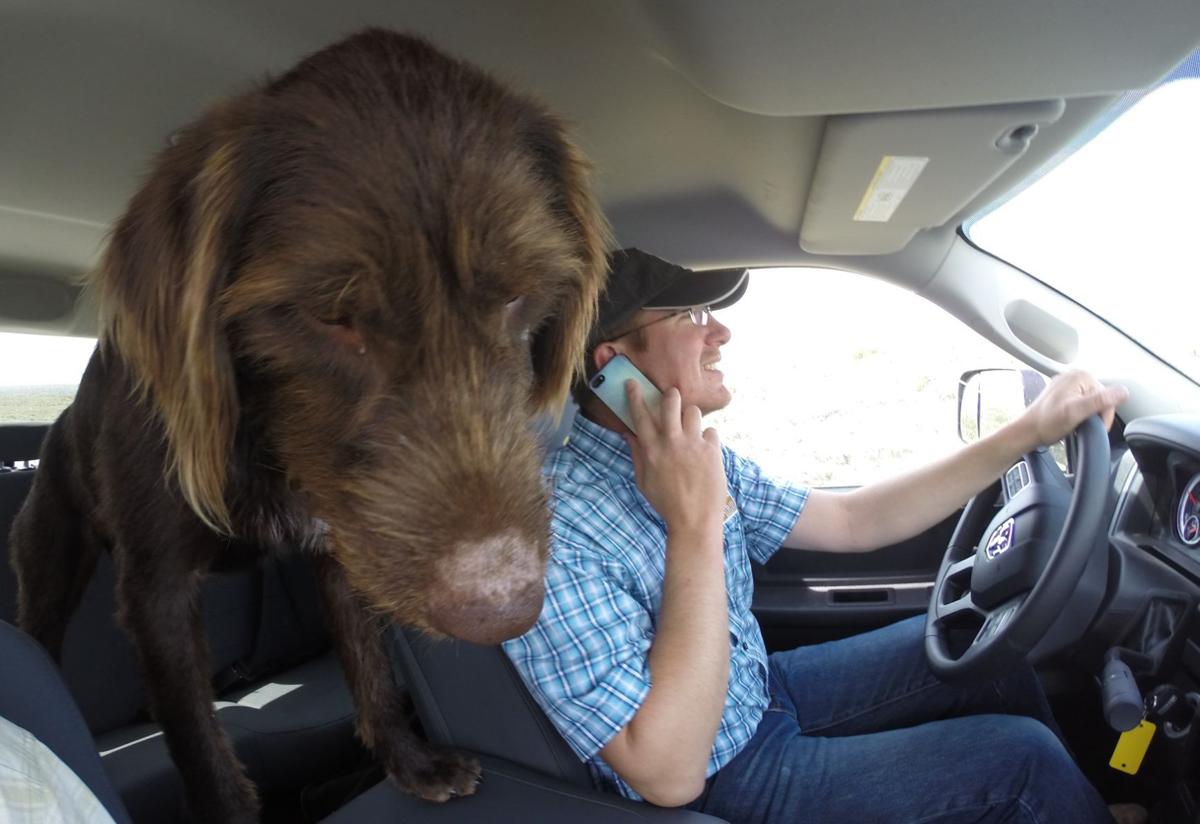 Husker, a dog belonging to one of American Prairie Reserve's staff, hops in to take a ride with Damien Austin, operations manager at the Eastern Montana conservation project. Austin joined the nonprofit in 2010 after growing up in Billings and attending college at Washington State University. 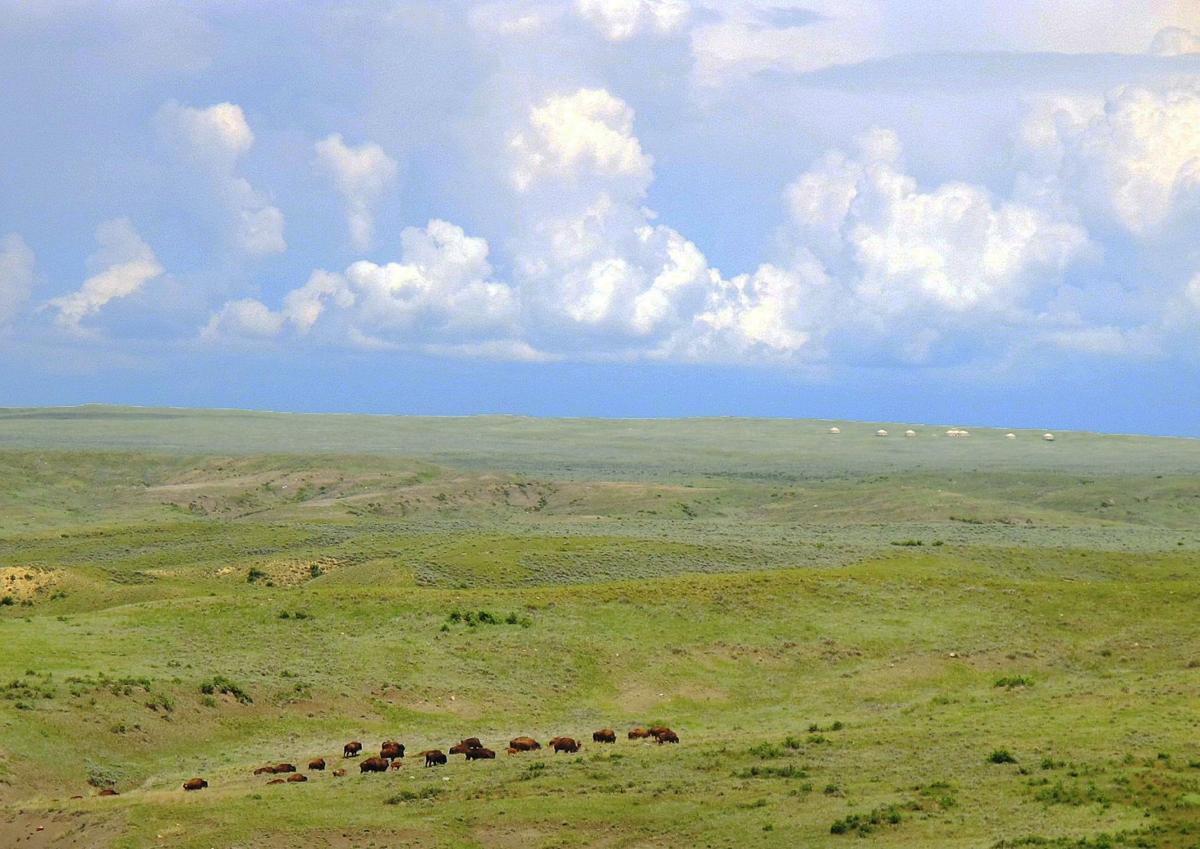 Bison move up a ridgeline above Box Elder Creek on the American Prairie Reserve last week. The herd has steadily grown to about 600 animals. 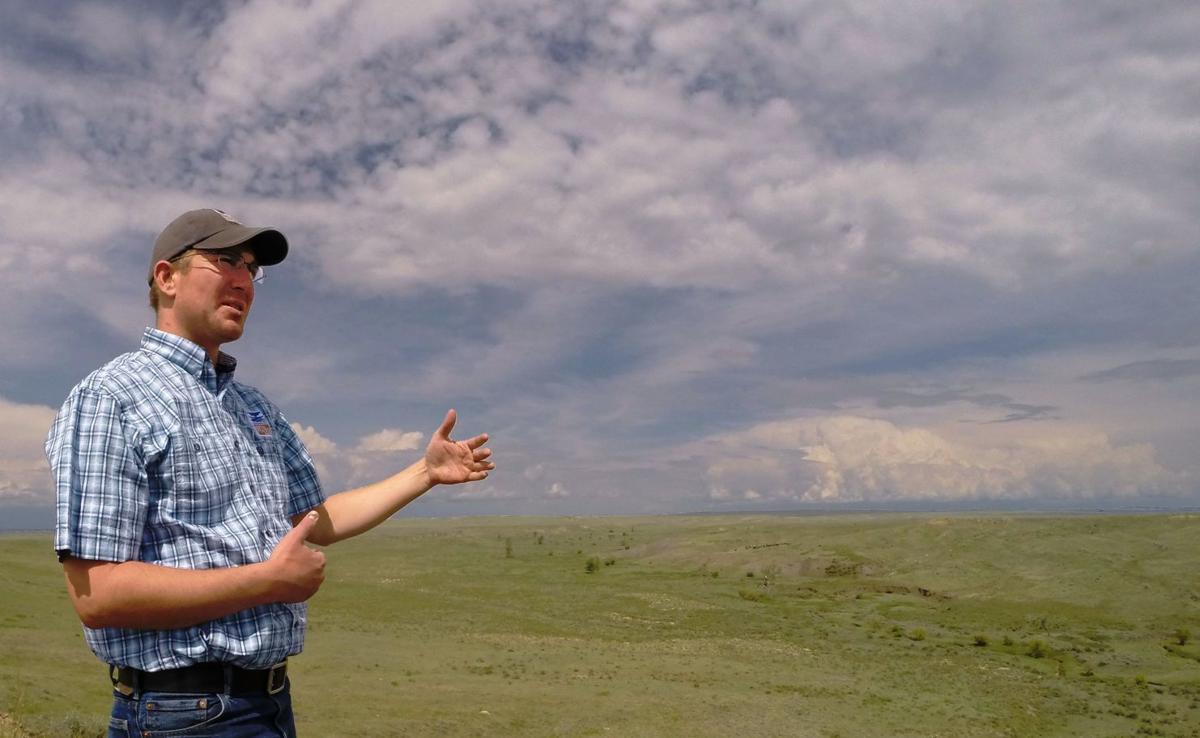 During his tenure at the American Prairie Reserve, Damien Austin has become a font of knowledge about the area's wild inhabitants and flora, easily ticking off the names of different cacti. 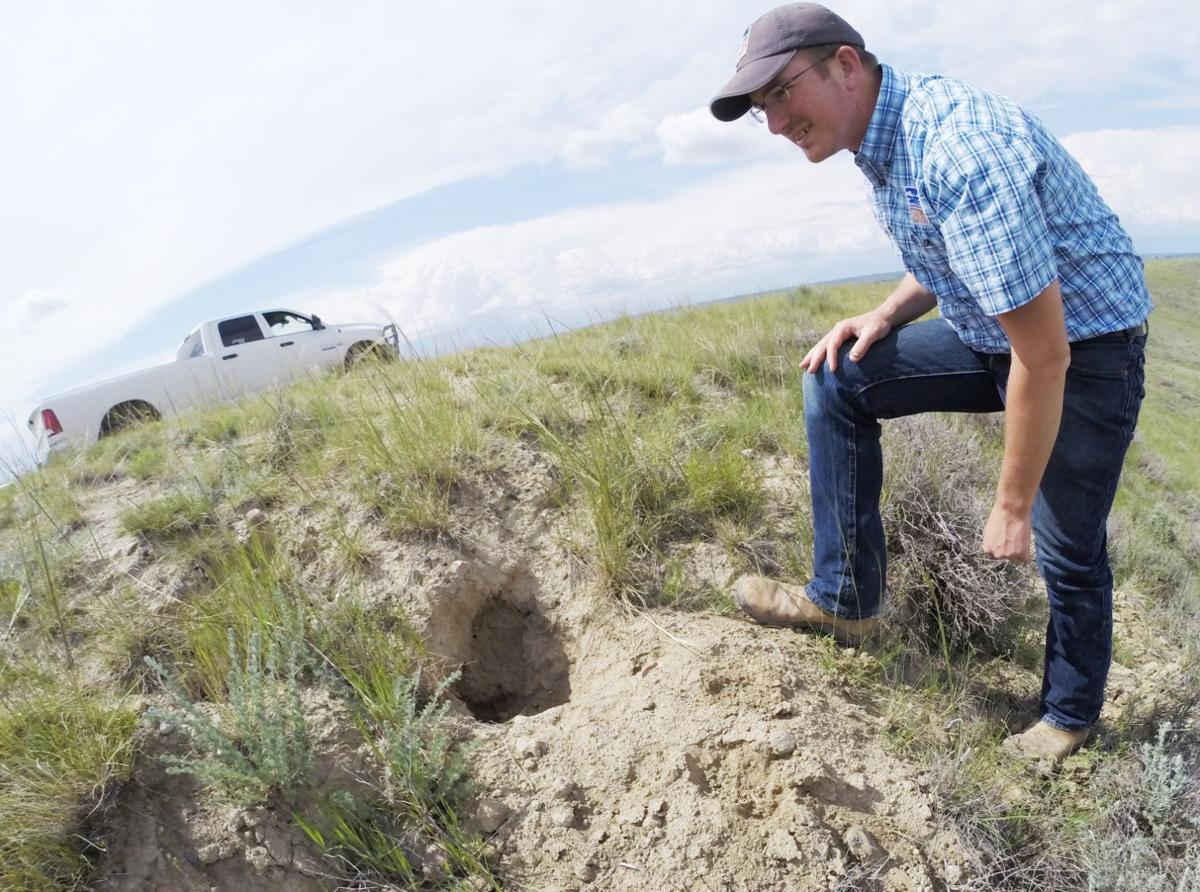 One of the American Prairie Reserve staff's weekly duties is to examine the electric fence that encircles the bison herd. But there's also time to explore the rest of the acreage. Here Damien Austin checks out an abandoned coyote den. 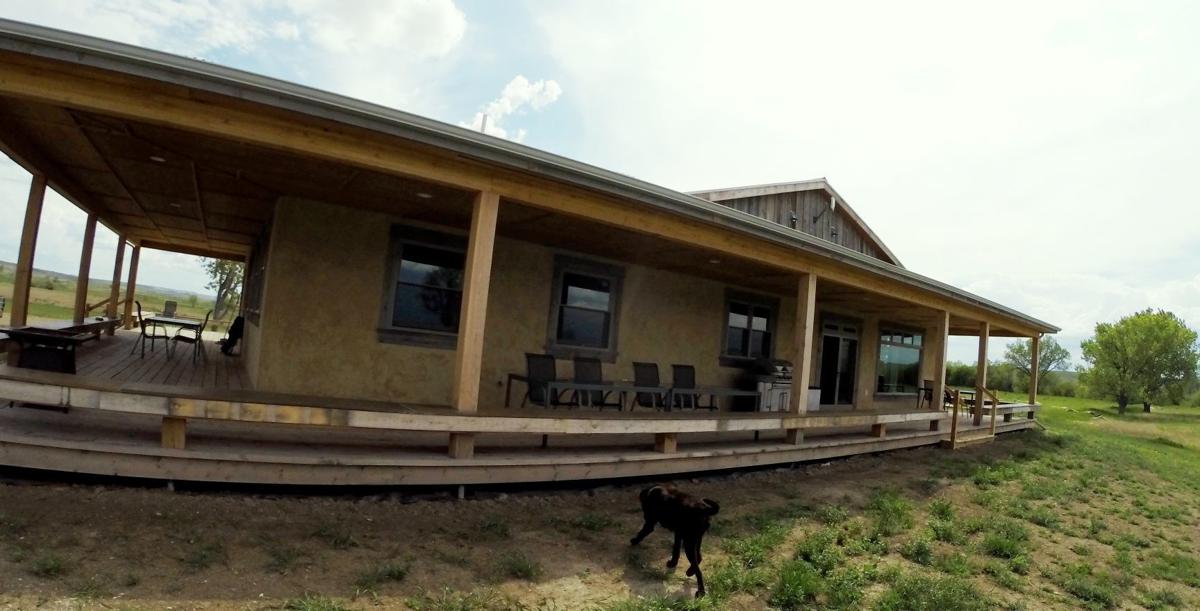 The Enrico Education and Science Center was recently completed on the American Prairie Reserve and has already hosted its first guests.

Story and Photos By BRETT FRENCH

Husker the hound was panting heavily in Damien Austin’s ear and slobbering on his arm as Austin steered a bouncing pickup across the spring-green prairie.

“Actually, I have about 40 favorite places in the area,” he said, all of which are spread across the 305,000 acres that his employer, American Prairie Reserve, owns in north-central Montana.

Stopping above Box Elder Creek and stepping outside, it was easy to understand why this overlook of the twisted stream in a deep draw had caught his fancy. To the northwest a small herd of bison watched nervously before moving off at a trot. Across the valley to the southeast, two bachelor bull bison lazed on a grassy hillside. To the east, the top of the Larb Hills pushed up to greet the bottom of a bank of dark storm clouds.

Austin, 34, is the operations manager — the top guy on the ground — for the American Prairie Reserve, a sprawling and ambitious conservation effort begun in 2004 with a goal of creating the largest wildlife reserve in the lower 48 states while preserving prairie grasslands, some of which have never been tilled.

“It’s so amazing to be a part of this, getting in at the beginning of something that’s going to last for generations and help forge what it’s going to look like in the future,” Austin said.

The reserve is a landscape of deep draws, wind-shredded hills and the occasional lush creek bottom. The property is located in scattered parcels just north of the Missouri River and Fort Peck Reservoir with the idea that one day they will all be joined together. The APR also abuts portions of the 1.1 million acre Charles M. Russell and UL Bend national wildlife refuges — the largest in Montana — which surround the river and reservoir. Because of the region’s rural location and arid climate, ranch families live far apart. The population of Phillips County, which contains much of the APR, was about 4,200 in 2013 spread across 5,200 square miles. Malta, the county seat, contains almost half of the county’s population.

Path to the prairie

Austin took a circuitous route to his dream job. Growing up in Billings, his family moved to Tri-Cities, Wash., in his junior year of high school where he decided to skip his senior year and go straight to college.  He earned a degree in general biology with minors in ecology, psychology and chemistry at Washington State University.

“I focused mostly on ecological management of systems,” he said.

After college, he worked at Floating Island International in Shepherd as a researcher for product development before joining ZooMontana. The veterinarian at ZooMontana also happened to be the vet for American Prairie Reserve. That connection introduced Austin to the project when he helped dart, tag and blood test bison calves. In the spring of 2010, he was hired as reserve supervisor.

“Actually, I always hoped I’d have a job like this — doing something on a big scale and having an impact,” said Austin, who now lives in Zortman. “There’s nothing else going on in the lower 48 states like this.”

Although Austin had taken part in 4-H projects during school, he’d never worked on a ranch with all of the problems that entailed, so he said he had a steep learning curve adjusting to the ins and outs of APR’s ranching neighbors.

“But for management of the reserve, we’re operating on a different level, for different goals,” he pointed out. “My background and education set me up well for that.”

American Prairie Reserve land is not irrigated, seeded for crops or harvested — although land is leased out to neighbors for grazing. Instead, the property is being kept in its wild state as a home to animals like prairie dogs, burrowing owls, coyotes, deer, elk and bison. Still, there are ranch-like chores to perform, which are carried out by a staff of seven full-time, year-round workers aided by 11 seasonal workers hired for the busy summer months.

From removing fencing to cleaning up the reserve’s public campground to leading visitors on tours, reserve workers have to be multi-talented. This year the reserve will host National Geographic student expeditions, a group of New York City students as well as donors and volunteers.

To meet the educational needs of the visitors, as well as to house graduate students and scientists conducting research on the prairie, American Prairie Reserve just expanded its Enrico Science and Education Center to provide housing, a place to eat and a classroom complete with Wi-Fi access.

Because of American Prairie Reserve’s goals, and the fact that it has bought up several cattle ranches, some locals are suspicious or even resentful of the organization. Longtime residents, who share a respectful wariness of outsiders, are concerned that the APR’s purchase of ranches means fewer families on the landscape, and therefore fewer students in nearby schools, less money being spent by those families in small communities and a slow death for a beloved, yet difficult, way of life — ranching and farming. Those feelings are somewhat offset by a strong belief in private property rights — that is, the right of landowners to do as they wish, be that APR or the ranchers and farmers who have sold property to the reserve.

American Prairie Reserve’s financial statements show just the opposite: Since 2004, the group has had a nearly $4.3 million economic impact on the surrounding region, not including another $20.7 million spent on land acquisition in Phillips County. The nonprofit is headquartered in Bozeman and run by a board of directors that includes CEOs from private equity investment firms and venture capitalists, but also takes direction from advisory group members from the art, science and conservation communities.

Although some locals may not appreciate APR’s presence, Austin said he’s never been chewed out in public — except at meetings — or treated badly by residents.

“Part of our standard operating procedure is to be available, be polite and listen,” he said.

Arguing with locals is not to the APR’s advantage, he added, and sometimes folks simply have incorrect information. As the reserve’s staff has increased, Austin noted some workers are integrating into the rural communities, going to the same churches, grocery stores and movie theaters.

“We’re not that faceless group anymore,” he said.

Only recently completed by Barta Built construction of Lewistown, the Enrico Education and Science Center offers facilities for groups, artists and individuals to study while staying at the remote American Prairie Reserve.

The house, which expanded on an old ranch home, sleeps 14 and has five bathrooms, a large kitchen, living room and deck as well as a well-lit classroom. Other amenities include an interpretive library with reference materials and an iPad station and educational displays.

The center is located on the Sun Prairie section of the reserve along Telegraph Creek and amid the roaming bison herd.

MALTA - A conservation group said Tuesday it has bought a 150,000-acre Montana ranch in a major step toward its vision of a national park-cali…

As Montanans wrangle over the transfer of disease-free bison from Yellowstone National Park to public and tribal lands, the American Prairie F…

The Bureau of Land Management has approved a request from the American Prairie Reserve to change a grazing permit on the 13,000-acre Flat Cree…

The Montana Farm Bureau is protesting the federal decision to let bison feed on public grazing land in Central Montana.

Damien Austin, a reserve supervisor at the American Prairie Reserve in northeastern Montana, talks about the newly-opened Enrico Education and…

Husker, a dog belonging to one of American Prairie Reserve's staff, hops in to take a ride with Damien Austin, operations manager at the Eastern Montana conservation project. Austin joined the nonprofit in 2010 after growing up in Billings and attending college at Washington State University.

Bison move up a ridgeline above Box Elder Creek on the American Prairie Reserve last week. The herd has steadily grown to about 600 animals.

During his tenure at the American Prairie Reserve, Damien Austin has become a font of knowledge about the area's wild inhabitants and flora, easily ticking off the names of different cacti.

One of the American Prairie Reserve staff's weekly duties is to examine the electric fence that encircles the bison herd. But there's also time to explore the rest of the acreage. Here Damien Austin checks out an abandoned coyote den.

The Enrico Education and Science Center was recently completed on the American Prairie Reserve and has already hosted its first guests.